We set off sometime before noon planning to arrive in Siena later in the afternoon.  During the preceding days I’d sold our little group on the campground where we would be staying, just outside Siena’s city walls.  Sitting on a hillside, its terraced campsites overlooked a very nice swimming pool, one we would surely enjoy after our long hot days in Yugoslavia.  I knew this because Rendy and I had spent a few days there in 1979.

Siena Outside the Walls

We arrived at Camping Siena Colleverde mid afternoon; at a time that experience had proved almost always guarantees a campsite.  This is primarily due to the fact that European campgrounds differ from American in a number of ways, the two primary considerations being that they can be located directly in or immediately adjacent to the city you are visiting and the tent camping section is generally an open pitch, that is, there are no assigned sites.  Thus the campground will keep letting in tents until it reaches some pre-determined capacity.  This does not always bode well, as we shall see later when we camp in Munich.

We pulled into the campground and proceeded to check in.  The clerk at the desk informed us that they were sold out.  Disappointed, we asked if there were any campgrounds nearby that could accommodate us.  He advised that there were a couple of informal sites not far away and gave us directions.  We piled back into the car and drove over to the sites to discover that they were basically just empty lots.  Somewhat stymied, I suggested that we go back to Camping Siena to see if they would let us swim in their pool while we figured out what to do next.

We returned to the check-in desk and I asked about swimming in the pool.  The clerk advised that it wasn’t allowed, but suggested a hotel not too far away that would let us pay to swim in their pool.  Back in the car we went, arriving at the hotel to find that we could indeed pay for a swim.  At about $5 apiece, including access to their showers, it seemed like a good idea on a very warm August afternoon.  We changed into our bathing suits, grabbed towels, ordered drinks, and proceeded to spend the rest of the afternoon lounging poolside.

Some other Americans using the pool were staying at the hotel and as we engaged them in conversation, one casually asked us if we were going to the Palio that night.  The Palio, we replied, what is the Palio?  After he described the event to us, we knew what we would be doing that evening.  Here is a brief description of the Palio from Wikipedia (more can be found at the link):

The Palio di Siena (known locally simply as Il Palio) is a horse race that is held twice each year, on July 2 and August 16, in Siena, Italy.  A pageant, the Corteo Storico, precedes the race, which attracts visitors and spectators from around the world.

Ten of the seventeen Contrade run in each Palio: seven run by right (having not run in the previous year’s corresponding Palio) together with three drawn by lot from the remaining ten. A horse is assigned to each by lot and is then guarded and cared for in the Contrade stable. The jockeys are paid huge sums and indeed there are often deals and bribes between jockeys or between “allied” Contrade committees to hinder other riders, especially those of ‘enemy’ Contrade

View of Siena from the Pool

Towards the end of the afternoon we packed up our gear and made our way in the car to a parking spot just outside the historic center of Siena which is surrounded by nearly four and a half miles of walls, built in the 14th-16th centuries, the route of which follows the contours of the three hills on which the city is built.

We wandered the narrow city streets, working our way to the center of town.  At some point, we came upon an open square, full of activity, and stopped for a bit to observe.  The pre-race parades were winding down and this was the spot where the handlers and their horses would re-group and the horses would get trailered and moved out of the city.  The pageantry of the occasion was ever-present; each horse and handler was garbed in the colors and symbols of the Contrade they represented.

As we watched, a crew began to load the horses into a fairly large trailer-truck.  One by one the horses would be led up the trailer’s tailgate that served as a ramp into the interior. 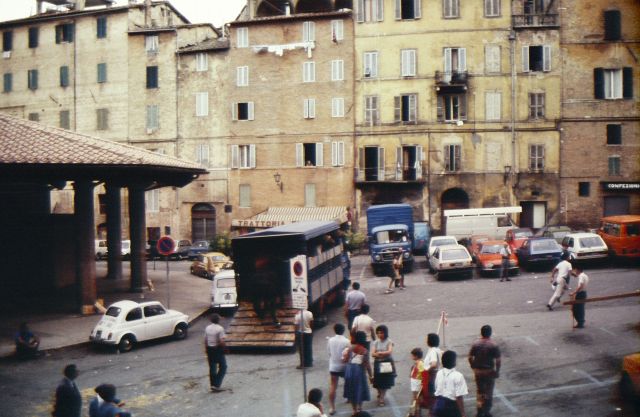 Trailer Waiting for the Horses

But as each additional animal was brought on board, it became obvious that the ideal arrangement for putting the greatest number of horses into the space, which would be perpendicular to the sides of the trailer as such:

Was going to end up like this configuration, creating a situation where they would be one horse short of a full load:

This obviously was not going to fly.  They tried loading the last horse in, head first and then using all types of inducements to push the back end in, from swatting it with a riding crop, to pushing it with the trailer’s tailgate.  Nothing was working.  They would re-group, consult, arms gesticulating, fail at the attempt and then re-group.  This went on for quite some time.  Finally, when it appeared that all hope was lost, one of the crew threw up his arms in recognition of a great idea.  He hurriedly communicated the details to the group and they all then raced off to their individual tasks.

Two crewmembers stationed themselves at the rear of the truck, lifting up the tailgate.  The idea man raced up to the cab of the truck, started up the engine, placed it in gear and hit the gas, lunging forward a few feet before slamming on the brakes.  In that instant, all of the horses shifted forward like dominos and in one fell swoop, the guys at the back slammed the tailgate home, latched it shut, and with a shout, the truck took off.

We gathered ourselves together and began to make our way towards Piazza del Campo, not sure what to expect next, as we were basically uninformed about the whole event.  As we neared the Piazza, the energy level started to rise and we decided to find a café/bar to watch the race on TV, and to let Heike rest given the heat and her pregnant condition.

Once settled at the bar, Joanna and I made our way a couple of blocks closer to the Piazza, where we came upon an narrow street leading to it that was blocked by a tall wooden fence and then a metal barricade patrolled by a member of the local police force.  Seeing this, we concluded that our chances of actually getting to witness the race first hand were nil, we started to head back to the bar when it became apparent that the race was about to begin.  We turned around to face the barricade and much to our surprise, that local guard had abandoned his post in order to go watch the race on the television.

We immediately sprung into action, hopping over the metal barricade and approaching the wood wall, seemingly too high for Joanna to scale.  I was able though to leap up and grab the top, and thus hauled myself up.  I reached back down and grabbed Joanna’s hand and pulled her up with me, and then we dropped to the other side.  Immediately in front of us was one more fence and gate, with bleachers on either side and on the other side was the Piazza, full of close to 50,000 spectators who have been waiting all day for the race. 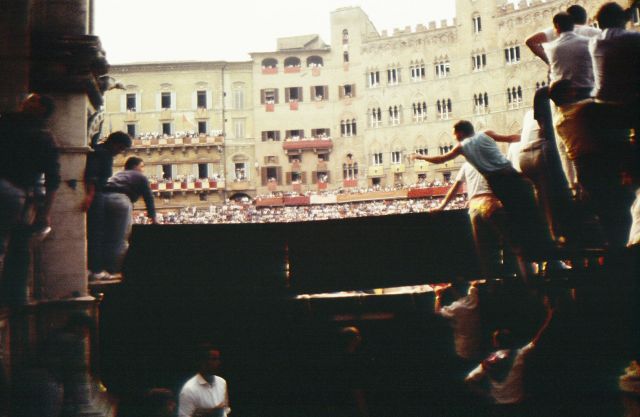 I climbed up the side of the bleacher on the right, pulled Joanna up, grabbing the camera and holding it over my head starting taking pictures just as the starting cannon fired.  Given the short nature of the race, it all seemed to go by in a flash.

The Race is On

As soon as the race was over, the gates below us opened and the crowd in the Piazza began pouring out, supporters of the winning Contrade exalting, losers sometimes weeping in sorrow.  We waited for the crowds to die down a bit and then went in search of Francois and Heike.  Once found we began to wander the streets, full of the type of energy that comes following such an exciting event.

From time to time we would hear the sounds of beating drums, tapping out the same rhythm over and over again (budalum da dum, budalum da dum, budalum da didly dum da dum).  It meant supporters of the winning Contrade were coming and that we should step aside to let them pass.  Almost all in any group would be wearing their colors with pacifiers hung on their scarves and in their mouths.  They also filled baby bottles with wine and were drinking from said bottles, symbolizing that the victory of the Palio is considered like the birth of a baby and so the members themselves automatically become newborns.

Supporters of the Winning Contrade as they Parade

We would eventually wind our way back to the VW.  Having passed two large dirt topped triangular traffic islands a couple of blocks away from Camping Siena earlier in the day, where it appeared people might be sleeping, we drove back there and sure enough, those islands had become a spot where one could wild camp.  We parked the car, pulled out our sleeping bags, and with the sounds of that rhythmic drum beat echoing in our ears, drifted off to a good night’s sleep.

The next morning, after heading out to grab some breakfast, we packed up the car and went over to Camping Siena to get an update on lodging.  With the Palio over, much of the campers had left and we were able to check in, set up camp and settle in for two more days of sightseeing.  Funny thing is, I can’t recall if we ever used the pool there, after all we had been through to get there.  I do remember making a Carbonara dinner one night, mimicking the recipe we’d experienced in Giessen, testing the pasta for doneness by tossing it against the tent fly.  A bottle or two of good red wine, enjoying that tasty meal, and good friends to share it with closed out our stay in Siena.

As a footnote, Jessica would get to see the Palio during her summer abroad experience in Siena while studying at UCSB.  Like any one of those 50,000 that view it in the Piazza, she spent a long hot day waiting for the race, having the time of her life.  I’ve been asked how I remember so many of these vignettes so well.  I’d say, and I think Jessica might agree, that they so thoroughly stand out against our day-to-day experience, that they reside with us as if we were still there, tasting the pasta, drinking the wine, hearing the laugh of someone you love.  Or at least, that’s the way it works for me.

(Editors Note: Many of the pictures here and throughout this trip did not digitize very well.  I apologize for the less than stellar quality)