Having arrived in Munich on September 17th, the start of Oktoberfest was still five days away, beginning on Saturday the 22nd.  Because of this, Camping Thalkirchen was still relatively deserted with lots of open space in which to pitch our tent. We spent the next four days sightseeing and shopping, taking in the Hellabrunn Zoo, the Olympiapark constructed for the 1972 Summer Olympics, and closing out with a very sobering day at Dachau concentration camp, the first of the Nazi concentration camps opened in Germany.

We returned to camp that night to a madhouse that had been brewing for a few days, as Thalkirchen had by this time been overrun by hundreds of fest goers, many of who treated the campground as if it was one giant beer tent.  The largest numbers of participants were either Australian (Aussies) or New Zealanders (Kiwis) and as we tried to fall to sleep that night, we were serenaded by two large groups of the aforementioned countryman, drinking into the night and engaging in a game that involved seeing which group could yell out the nickname of their country the loudest.  The shouts of Aussies, Kiwis, Aussies, Kiwis rang out long after we’d finally fallen asleep. 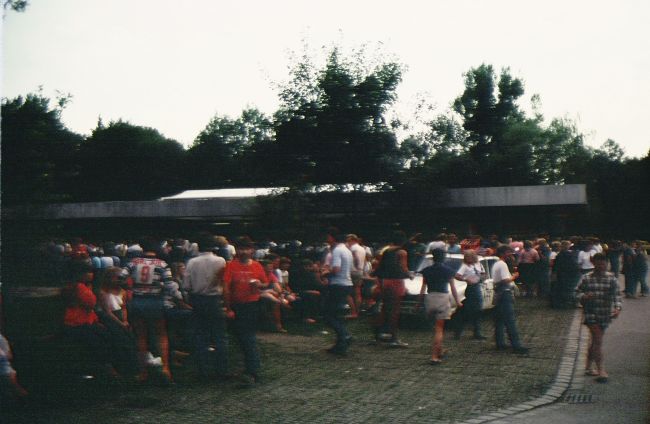 Setting Up for the Aussie/Kiwi Drinking Game

Later it started to rain quite hard, and it kept up all night, a comforting sound if you are snug and warm in your recently waterproofed tent.  Our work on the floor earlier in the month had paid some dividends, but not completely as we awoke in the dead of night to a feeling akin to sleeping on a waterbed, as indeed we were.  The ground had become so saturated that the rain had no where to go and we found ourselves floating on our pads on a bed of water that had been driven under our tent and subsequently through parts of the floor.  I’ll never forget the sight when I opened the tent to retrieve our shoes (which we’d leave outside under the fly) only to see them bobbing close to the shore of the small lake that had formed there. 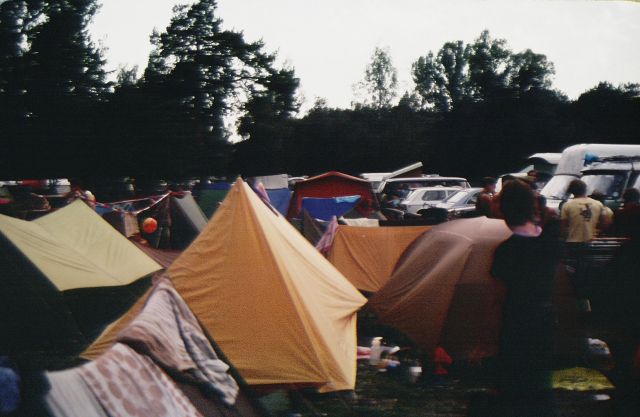 After that restless night we woke to clearing skies, a good omen, as we would be spending the day at Oktoberfest.  We arrived at the fest grounds in early afternoon and hit the Augustiner Beer Tent.  After finding a spot at a table, we struck up a conversation with Todd, a young American going to school at UC Berkeley.  This is a common occurrence at Fest, the beer, food, music and energy helping to form a connection to folks from the States, particularly when you’ve been on the road for a while.

The afternoon passed, spent drinking and talking to Todd, and departing the tent, we said our farewells.  Joanna and I were feeling a bit woozy and fatigued from our adventures the night before, so we found a grassy spot on a hillside at the outskirts of the fest grounds, laid down, and took a bit of a nap in the warm sunshine.  We awoke refreshed and after experiencing a few of the rides in the fun zone, made our way to the Spaten Beer Tent, our favorite place to land at fest.

The music at fest is an interesting hybrid of typical German drinking songs and classic rock delivered with an oom-pah beat.  After you’ve had a couple (OK, a few) liters of Fest (Marzen) beer, the music becomes irresistible and true to legend, you find yourself joining your table mates and most of the rest of the tent in dancing in your seat, dancing in the aisles and as many know, dancing on the table.  This went on until we’d had our share, particularly knowing we were going to have to break camp the next morning to take the train back to Giessen and prepare for our flight back to the states in three days on the 27th. 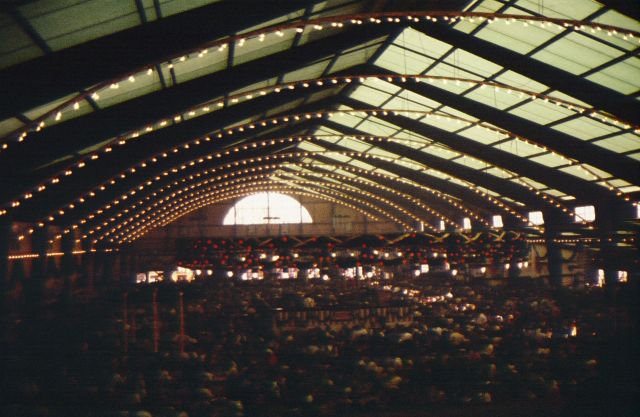 Inside a Beer Tent

It had started to rain again and a bit tipsy, well let’s be honest intoxicated is a better descriptor, we made our way to the UBahn to catch a train back to Thalkirchen.  When traveling, I’m generally the one we rely upon to sort out directions and to get us where we need to go.  That was going to be difficult given my diminished state and as a consequence it took us twice as long to get back to camp, having taken more than one wrong train.

Looking forward to getting out of the rain and a good night’s sleep, as we approached the tent I stumbled (drunken miss-step or random happenstance? We’ll never know) and fell heavily onto the tent, producing a sound that quickly brought me to attention, that is, an aluminum tent pole breaking.  Modern day tent systems rely on a taut rainfly suspended over the body of the tent, keeping the fly off the tent to prevent moisture buildup inside.  A broken pole was going to be a weak link in this system.

Did I mention it was raining? Not as hard as the night before, but enough to drive home the realization that we wouldn’t last until morning in a dry state with that broken pole.  Fortunately we had a spare section of pole with us and then the most amazing thing happened.  For as long as it took to effect a repair, which involved folding back the fly to get at the pole, taking the pole out of the tent sleeve, popping the cap on the top of the pole and untying the knot in the shock cord that kept it in place, taking the broken section out, threading the shock cord back through all four sections of the pole, tying off the cord and putting the cap back on, I sobered up just long enough to complete every step in a flawless and timely fashion.

It was good to see Dave and Cindy again and to spend our last couple of nights in Europe with them.  The next three days were filled with preparing for the flight to the States, with laundry, packing, shopping package mailing (through Dave’s access to the army base), a Carbonara dinner at home and a final very nice dinner out.  Up early the morning of the 27th, Cindy gave us a ride into Frankfurt on her way to work and soon thereafter, we boarded the plane for New York City.  The rest of the adventure, two months worth, will be revealed in the next post.