The flight on Ryan Air, a pioneering company that changed how folks travel there, was uneventful.  Our first on an airline within Europe; on prior trips you either drove or took the train, as intercity travel by air was very expensive.  Ryan Air’s introduction of Southwest Airlines model pricing and penchant for flying in and out of airports peripheral to the cities they serviced brought a mode of travel to Europeans that we’d long enjoyed in the states.  Today, the fare ranges from a low of 50 Euros to a high of 256.  I don’t have a record of what we spent in 1998, but recall that it worked out to about $100 per person, maybe a bit less for Jessica.

Francois drove out to Paris Beuvais airport to pick us up; a not so convenient seventy miles from their place in Montigney-Le-Bretoneux, a downside of flying Ryan Air.  We’d spend five nights with Francois and Heike and the pictures I have of that time reflect our focus; not too much on Paris itself and no grand reunion of friends, at least none captured on film.  Personal lives had begun to fracture by this time; with Patrick and Julike having divorced in 1994 and many of Francois’ close friends having moved from Paris. 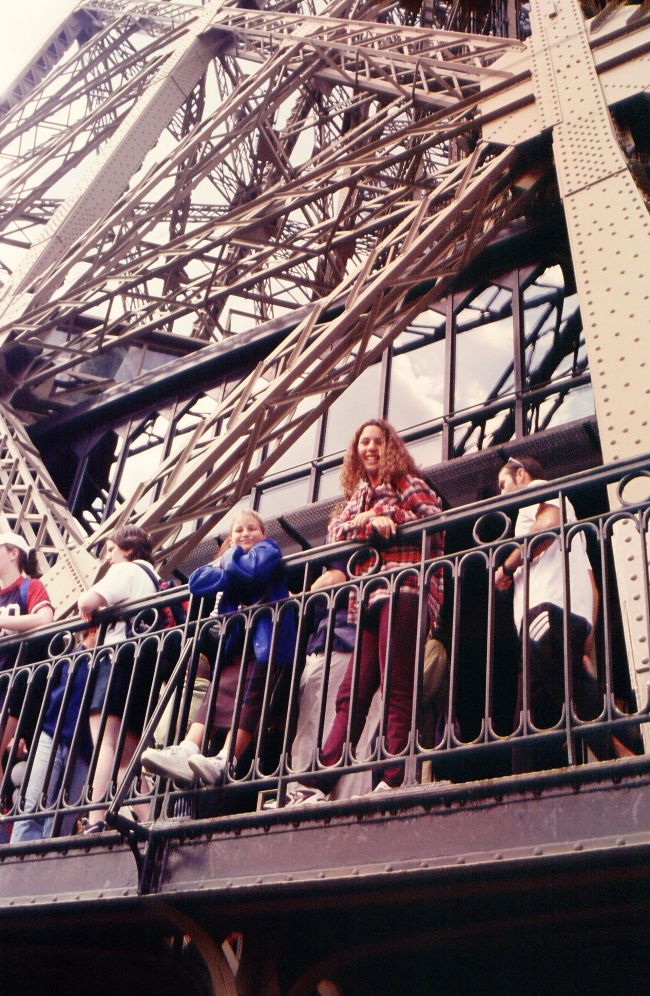 Jessica and Lisa at the Eiffel Tower

Most memorable is a day trip the three of us took with Francois out to Claude Monet’s house in Giverny, about an hour’s drive north west of Montigny.  If I recall correctly, Jessica had studied Monet in school so the trip had a relevance for her that some of our outings lacked.  I think the adults were all a bit tuckered out from a number of late nights spent talking and drinking.  The house has been faithfully restored and reflects life, as it existed for Monet and his family when they lived there from 1883 until his death in 1926. 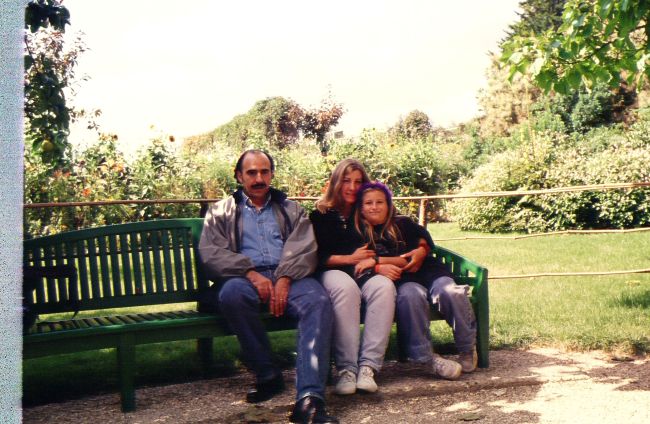 We spent quite a bit of time in the gardens that Monet developed to be a subject for his painting.  We walked the paths, soaking up this serene and inviting setting, particularly enjoying the ponds with the water lilies that he had made famous.  A number of photos I took tried to recreate the settings of his more well known paintings, but a lack of blue sky and talent on my part rendered that concept moot. 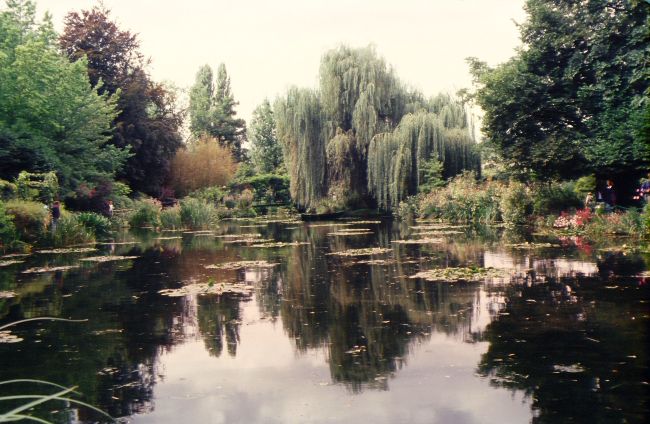 On Saturday the 29th we hopped on board a Eurostar train at Gar du Nord for the two and a half hour trip through the Channel Tunnel (Chunnel) to London.  Traveling at speeds close to two hundred miles an hour, one really had no clue we were traveling at that speed.  Elements of the trip were a little disappointing though as the tunnel portion is just that, traveling through a darkened tunnel with nothing to look at.

In planning for the trip we were unsure of where to stay in London until Michael Kelly, or was it John (David Kelly’s brothers), mentioned that we should consider using the services of London Homestay, a web based placement service that utilized private homes for lodging.  I can’t recall if they recommended are eventual location, or if we found it through the Homestay website, but our destination, Mrs. Duncan’s at 104 Glengall Road in Woodford Green (a suburb about 20 minutes by tube from the center of London) turned out to be a delightful choice. 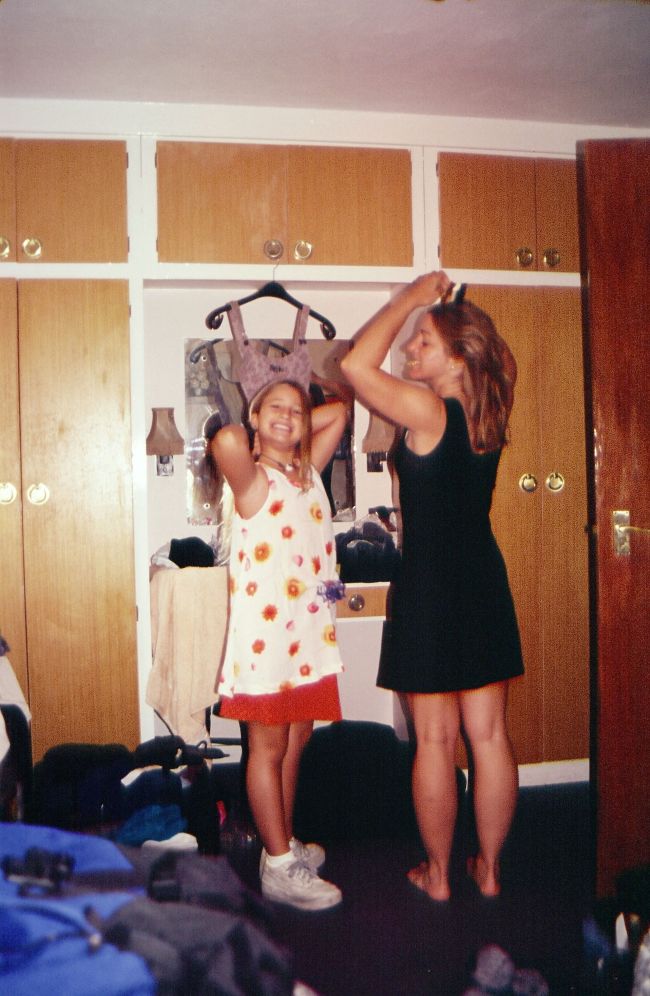 Getting Ready to Go Out

Our first full day in London was spent at the now defunct Museum of the Moving Image that focused on the history of technology and media, including cinema and its forerunners, which had a particular appeal to Jessica.  We stopped for dinner at a guidebook recommended spot, the Chelsea Kitchen and liked it so much returned two nights later for more. 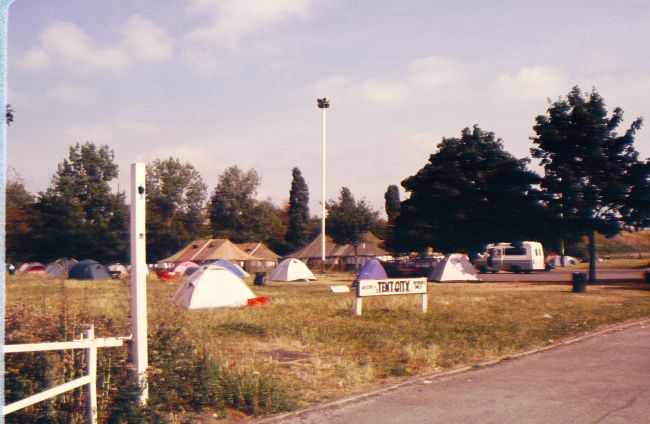 A Brief Stop at the Tent City Site

The following day we hit the major tourist spots in central London such as Westminster Abbey, Trafalgar Square, and Hyde Park where our walk through Kensington Gardens took us to the front of Kensington Palace, the official London residence of the Duke and Duchess of Cambridge.  It has been a residence of the British Royal Family since the 17th century, and was home to Diana, Princess of Wales until her death in August of 1997.  As a beloved figure to many, tributes to her covered the gate and fence in front of the palace, a vivid reminder of how some public figures can touch many lives. 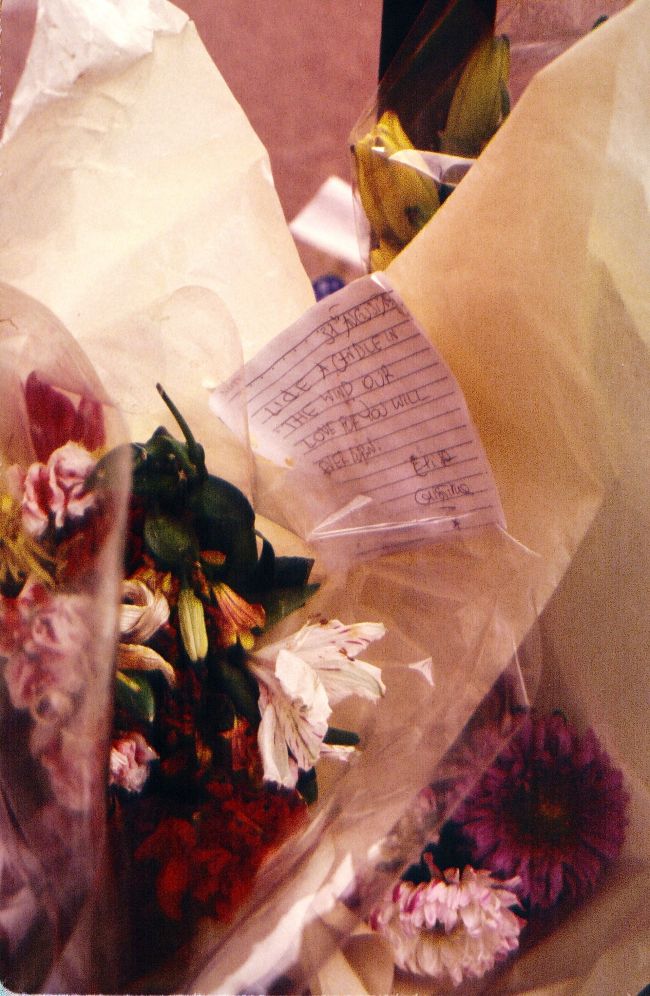 Our last day in London was eventful, as we attended the annual Notting Hill Carnival, which takes place on the streets of Notting Hill, Royal Borough of Kensington, and Chelsea each August, the August bank holiday weekend, Attracting around a million people each year, it is one of the largest street festivals in the world.  First held in 1959 as the “Caribbean Carnival”, it is now viewed as a celebration of London’s multi-cultural diversity.  Featuring floats and multiple steel bands, it is an exciting and at times overwhelming experience. 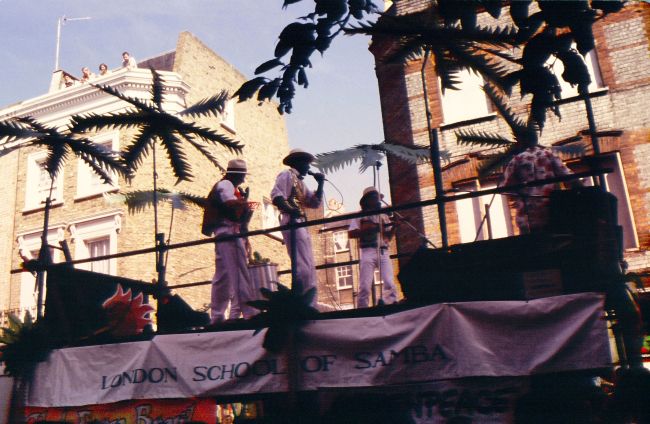 By this point in the trip, I was tired of drinking British ales and in the interest of obtaining maximum return on investment, consumed a number of SKOL Super Strength Lagers.  As the afternoon wore on, it became apparent that I wasn’t the only one interested in achieving an altered state of consciousness.  Most intriguing to me were the entrepreneurs who loaded up shopping carts with an assortment of various types of adult beverages and circulating through the crowds, sold out of stock in no time flat. 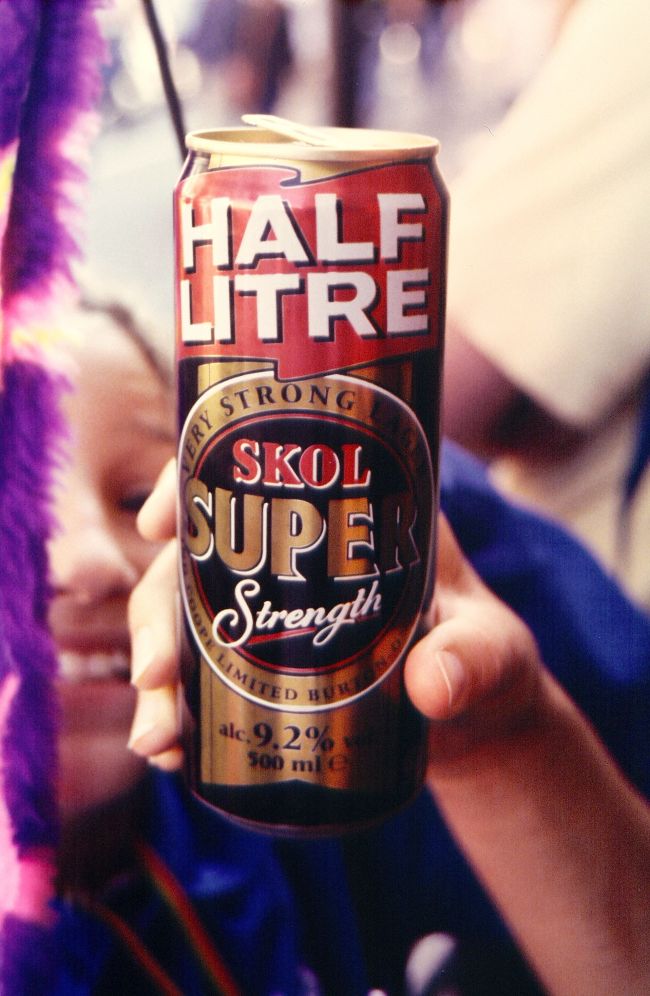 A Half Litre of Attitude Adjustment

As night began to fall, we realized we needed to break away as Jessica was getting hungry and was beginning to become unnerved by the uninhibited behavior that surrounded us.  Perhaps what pushed her over the edge was a glimpse at numerous people relieving themselves at the end of a short dead end street.  Not something your typical ten-year old will run into on a regular basis.  So we made our way to public transportation and back to the Chelsea Kitchen for a final meal in Europe. 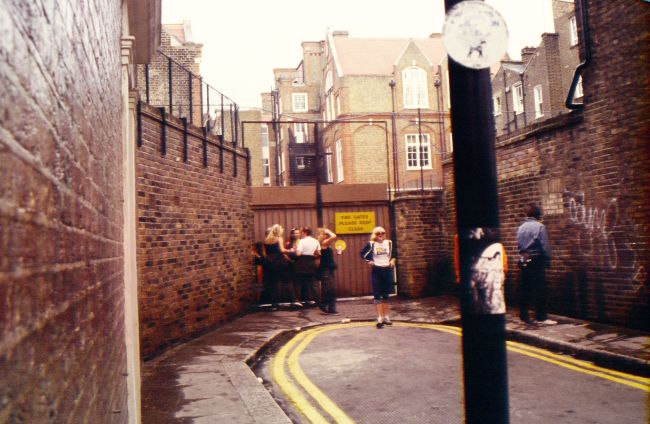 When the Restrooms Are Crowded or Hard to Find, You Find Any Port in a Storm

Our flight home was uneventful and after a day or so there we loaded up our 1987 Isuzu Trooper with bikes and made our way down to El Cajon (eastern San Diego) to spend the Labor Day weekend with my Dad.  Joanna and I went out for a couple of bike rides, one of which took us by El Cajon Ford.  We’d been thinking about getting a new car to replace the Trooper, which at eleven years of age was beginning to lose its luster.  The dealer had a good assortment of Explorers and Expeditions in stock and so we stopped in to check them out.

We were used to the size of the Trooper, and so the Explorer was a logical choice for us, but the increased size and capacity of the Expedition had its appeal, given our penchant for loading the car with gear for traveling.  As it turned out, a pretty maroon Eddie Bauer (fully loaded) Expedition was on sale, a blown finance deal that had to be sold as a used car.  Back at my Dad’s I ran the numbers and determined that the price was very good and that we could afford to take on the monthly payments.

And so, proceeding down a path that one is often advised against, we bought that Expedition and drove it, and the Trooper, back up to Los Angeles.  My Dad returned with us as the Kelly’s were having a party that Labor Day and he drove up with Joanna.  Jessica and I hung back waiting for the paperwork to finish and then climbed into our new car for the exciting trip up the coast.  It would be the first of may such trips, with many miles of travel and many memories to come.  We still have that car and at 190,000 miles it is still in great shape, and, as I often tell folks, one of the best cars I’ve ever owned.  Not a bad way to make your homecoming a little brighter. 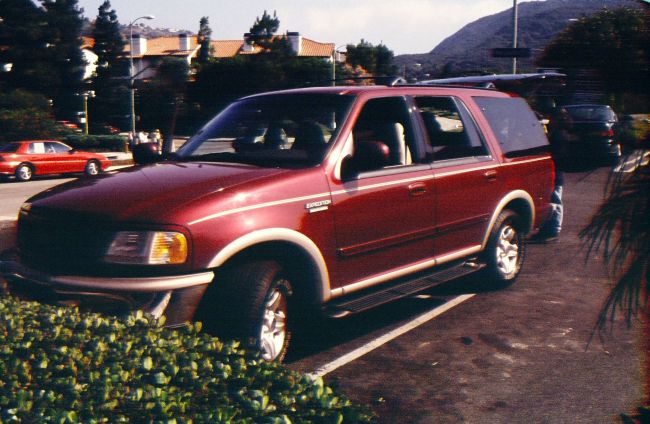