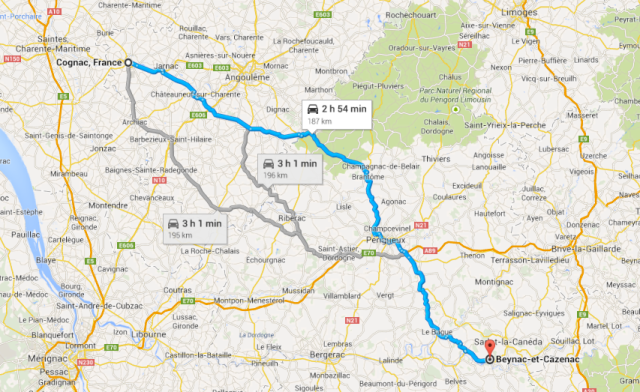 We arrived at Le Capeyrou Campground at the edge of the small town of Beynac mid afternoon on Friday, May 30th and were delighted with the site and its facilities.  Beynac is a picaresque place, with its well-known castle perched high atop a steep hill overlooking the Dordogne River.  For the first time on the trip we’d hit a campground with indoor and outdoor public spaces, and best of all this one had a small bar and some form of brought in meal service every other day or so. 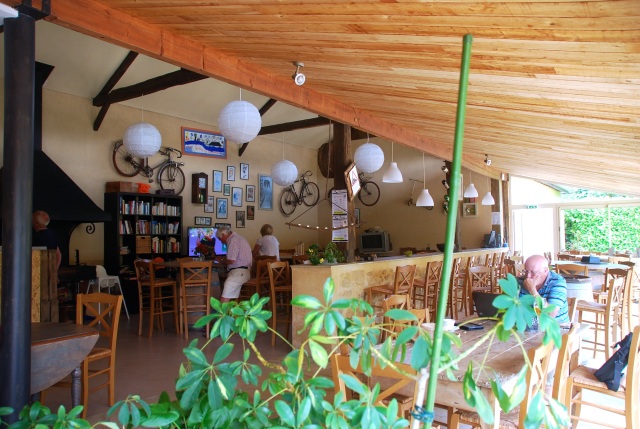 The Bar and Seating area at Le Capeyrou

We picked site 21, on the edge of the campground facing the river; that would be our view during our stay.  The appeal of the indoor bar (with cold beer) and the lack of easy device charging and inconvenient Internet access at Camping Cognac drove me indoors for the rest of the afternoon, checking email, doing some banking, and trying to get caught up on blog posts. 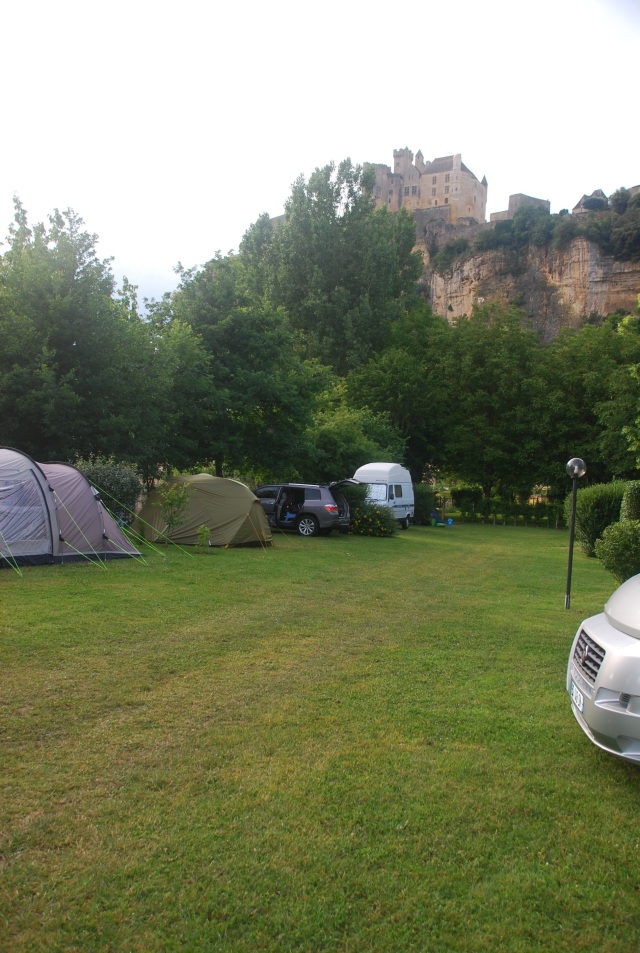 We had a simple dinner in camp that night, a jar of sauce and pasta with veggies and awoke the next morning ready for our first venture to one of the many caves in the area that feature Cro-Magnon art.  We drove out to the small town of Montignac where we purchased a ticket package for the Lascaux 2 cave reproduction (the original Lascaux is now off limits to visitors) and Le Thot, a combination animal park and new age approach to understanding Lascaux.  We had some time to kill before our tour so we walked through a small street market, picking up some white asparagus to grill later with dinner. 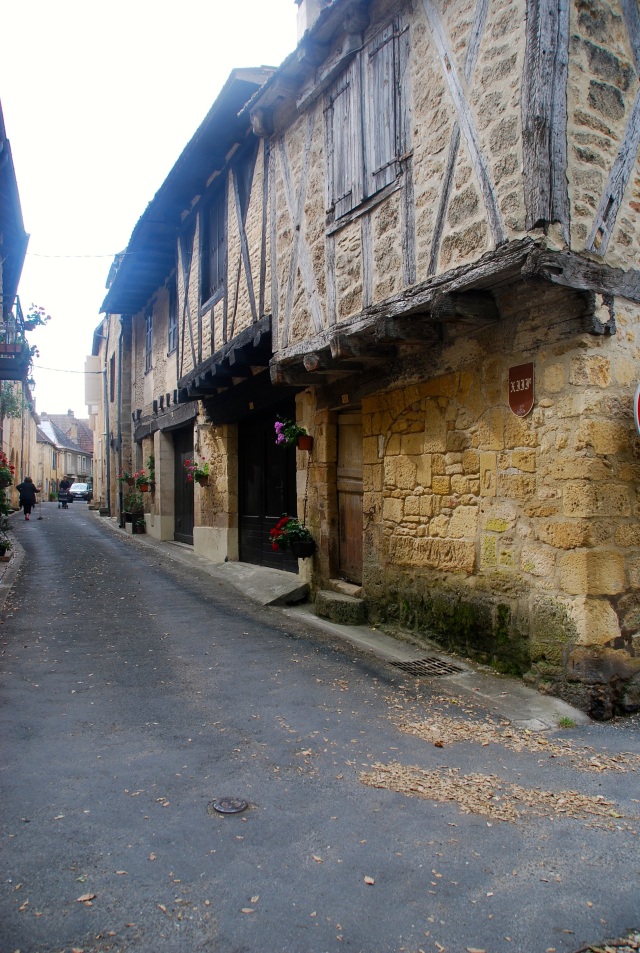 A Side Street in Montignac

Joanna and I both have a fascination with caves and this opportunity to witness drawings nearly 17,000 years old, and what they say about the level of civilization present during the time of their creation is staggering in scope.  These are not the primitive scratching of someone practicing at drawing.  They are the work of experienced artists, who understood anatomy, perspective, and the physical characteristics of the material they drew on those they drew with.

We stopped on the way to Le Thot and picked up some supplies for a picnic lunch, a small baguette, salami, cheese, and bottled fizzy water to drink.  Once parked at Le Thot we opened the tailgate and enjoyed, much as the French and most other Europeans do, a simple meal bought fresh that day in a market.  Le Thot was nice, but not special.  We were told there would be an English presentation after our arrival (with the attendance special effects) but a large group of French families threw that off so we experienced the hour-long show in French.

We returned to camp and picked up more supplies for dinner across the street from camp at the market and butcher store.  We planned to test out the new grill on the camping stove so we selected a potato to thinly slice, a zucchini squash and an onion, along with two nicely sized chicken breasts.  Oh, and another 4 Euro bottle of wine. 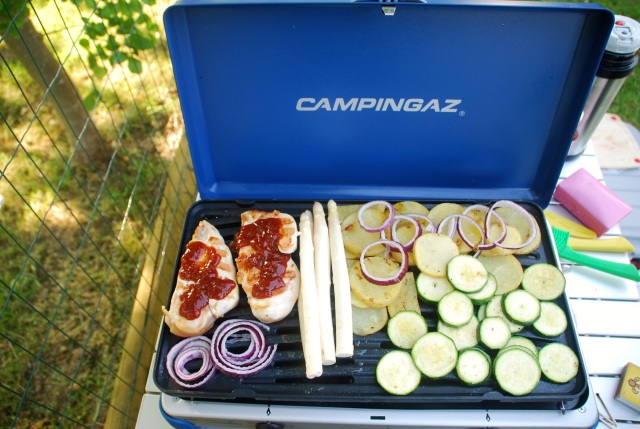 Trying Out the Grill

Back in camp we did our preparation work, fired up the stove and got food on the grill.  We soon discovered that the grill works well, but a downside of the stove is that unless you bought the full rig, which included a stand, there are no windscreens on each side of the stove.  Thus a gusty breeze kept blowing out the flame.  But we persevered and eventually dinner was ready and delicious.  We’ll work on that windscreen issue as we travel in Spain.

Our goal for the next day was to visit the cave at Grotte de Font-de-Gaume.  This is the last cave still open to the public with the original 15,000-year-old prehistoric multicolored (polychrome) paintings, of 230 animals, 82 of which are bison, often in elegant motion and painted with a moving sensitivity.  To preserve the fragile art, only 180 people are allowed to visit each day, in groups of 12. To ensure a tour, we arose early in order to be in line by 7:30 for the two hours until the ticket window opened.  It was a little cold that morning, but we’d brought some coffee and food from camp and ended up in line with two American couples, one from Seattle and one from the bay area of California and our conversations made the time fly by. 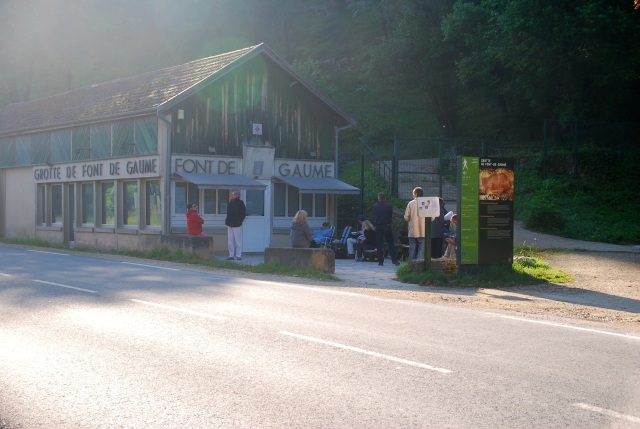 We all signed up for the first tour at 10:00 am, which was in French, as the next English tour wasn’t for a couple of hours.  We hiked up the steep trail to the entrance to the cave and as the group gathered it became obvious that the majority of us were English speaking.  When the guide arrived he advised us that he’d be conducting the tour in English, a bonus that more than made up for the switch we’d experienced the day before at Le Thot.

This was a very good tour, again reinforcing the complexity of the art and the skill it took to create it.  Quarters were cramped and there were a number of slippery stepped passages to be navigated, which went well until we were on our way out at the end of the tour.  I ascended one tricky passage and as I began my descent down the other side I worried about the lack of a handrail.  It might have been that momentary distraction, or just old age and native clumsiness that caused me to miss the second of three steps, my right foot slipping out from underneath me and down I went, fast and hard.

Falling down backwards onto stone steps is no fun thing.  I hit at least four places with maximum impact; both elbows, middle back and lower right buttock.  It lit me up like the fourth of July.  I caught my breath for a moment, got to my feet and made it out the short distance to the cave entrance, took a few minutes there to take an assessment of my condition and then moved on down the trail back to the car.

We made or way back to camp and relaxed for the rest of the day.  As it was getting warm, I figured I’d head up to the pool and take a swim to see if I could work out some of the kinks from the fall.  The water was cool, but not unpleasant and I completed a couple of laps, about my limit. 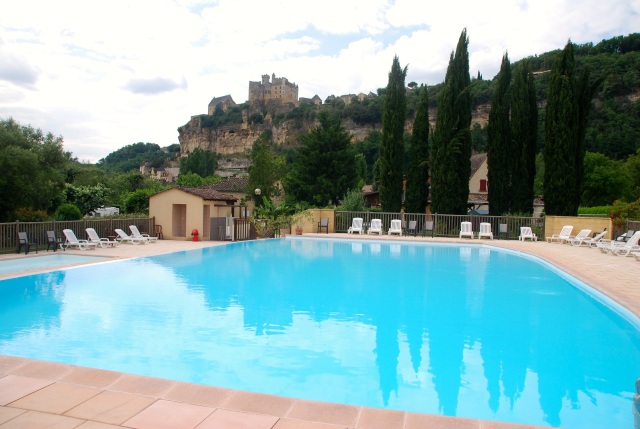 The Pool at Le Capeyrou

Disturbingly, when I climbed out of the water my left ear displayed the symptoms of having water stuck inside.  This had happened to me a year earlier, while we were in Costa Rica and it took a visit to the doctor upon my return to the States to get a build-up of wax removed which was causing the blockage.  So I was a little concerned about the potential of having to visit one here if the condition didn’t clear up.

To make matters worse, I’d come down with some combination of cold and allergies starting in Cognac which I was slowly working my way through, but as a result couldn’t taste much.  Since we’d been eating camp food for a number of days though, and hoping I’d regain my sense of taste, I suggested to Joanna that we try to have a nice meal out, particularly as we’d not been able to in Cognac.  She agreed and we settled on La Petite Tonnelle in Beynac, recommended by Rick Steves, an easy walk from the campground.

We arrived just before they opened at 7:00pm and had a chance to peruse the menu.  It was very nicely arranged, with a selection of a la carte items, but also a number of different prix fixe choices, such as one starter and desert, one starter and one entrée, or all three.  We chose a starter/entrée and a three-course meal, as the choices seemed quite good and the prices reasonable at 21 and 28 Euros, respectively.

I ordered a smoked salmon plate, which came with toasted French bread, nice horseradish butter and a green salad.  Joanna took the goat cheese with bacon and thyme, wrapped in phylo dough and baked, accompanied by a green salad.  This is where, unfortunately, the meal broke down for me, as I couldn’t taste a thing.  Our entrees were nicely prepared and presented, but it was all lost on me, as well as our desert of a walnut cake, that particular nut being a local specialty.

In the end this very nice meal ran us a little over 50 Euros, including a glass of wine apiece, not terribly expensive for a good dining experience.  As I sat at dinner, body aching from my fall, ear clogged with water and not able to hear from that side, no taste to speak of, it came to me that no matter how well planned or executed the trip, invariably there is a day when nothing goes right and it is just a bad day.  If you are lucky, it’s just one bad day.  I went to bed that night and slept surprisingly well, hoping that when I awoke, my one bad would be over. 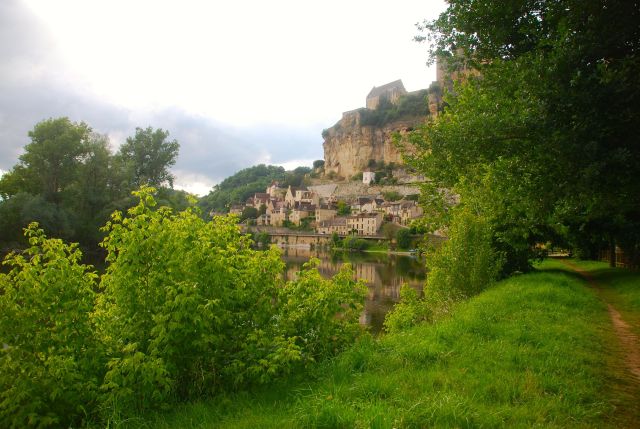 The View from Site 21