Europe 2014 – Pamplona Minus the Bulls 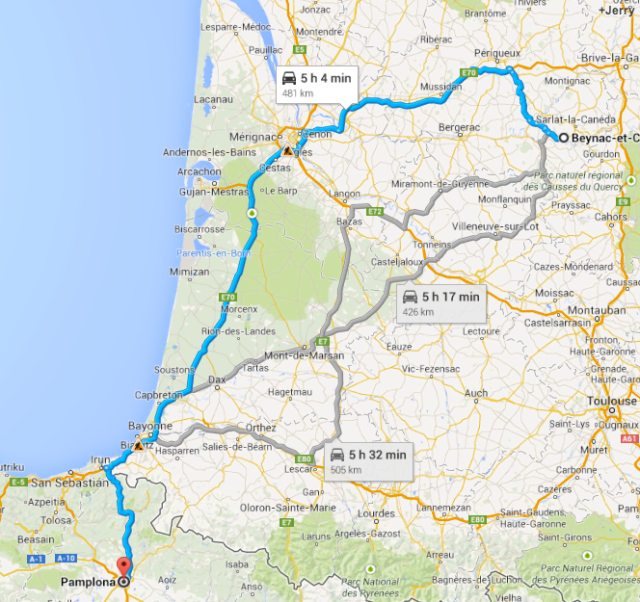 It was a pretty long, but uneventful drive from the Dordogne down to Pamplona.  We hit a couple of short sections of toll road, but the charges were reasonable.  We crossed over into Spain just south of Bayonne and Biarritz on Highway N121-A, a good road that brought us to Camping Ezcaba, about five miles outside of Pamplona central.

Nestled in a rounded valley about 1,500 feet above sea level, it is one of Spain’s more prosperous cities.  The campground has nice facilities, with a small bar and restaurant, good restrooms and the usual international crowd we’ve come to expect, almost all of them our age, from the Netherlands, Great Britain, France, Germany, and other countries, all traveling in either a trailer or motorhome.  We still continue to draw interest due to the missing front license plate, but have found that it also tends to start conversations.

We set up camp and then drove a short distance towards town to a Dia market that would become our go to place for groceries.  As it was getting late, we wanted something quick and easy and given the good experience we’d had at Francois’ with a frozen package of Paella he’d prepared for us, we bought a bag with Jamon and Mariscos (ham and shrimp with some other unidentified pieces of seafood), a package of mixed fresh mixed vegetables and, yep, a four dollar bottle of wine.

Back in camp it took no time at all to cook up the Paella and steam the veggies and so we sat down to an easy and reasonably good tasting camp meal made even better by the local white wine, one I’d purchase more than once afterwards.  As anticipated, this part of the journey is about the wine.  Beer is freely available, but is primarily lagers and pilsners (much Amstel in the higher end bars), primarily because of the hot climate and also because Spain is known for its wine.

With the intent of getting a couple of bike rides in, we set out the next morning on a nice dedicated bike path towards Pamplona, about 12 kilometers away.  We got turned around a couple of times but eventually stumbled upon the junction with the Camino de Santiago, also known as the St. James Way.  Our primary motivation for spending time in this northern part of Spain was our fascination with the Camino, its history, and the pilgrims (Peregrinos) that walk any number of the paths that come to make up the Camino, a distance of roughly 500 miles.

Given our history of hiking and backpacking, an attempt at walking the distance of the Camino is something we would have contemplated if age and time hadn’t caught up to my right knee and back.  So our next best option is to try and ride some portions on our bikes.  Thus we were excited to connect with the Camino, and as we paused to cross an old stone bridge over the river Arga as it flowed through town, a number of Peregrinos came down the path, walked over the bridge and made their way towards the older historic center.

Bridge at the Camino Junction

The path is well marked and we made progress through the newer outskirts of Pamplona, following the route as it climbed a steep hill and as we approached the walls surrounding the historic center of town, entered a gate that led into a warren of narrow crowded streets, as so many European cities contain.  Content to wander, we hopped on and off the Camino, eventually making our way to Pamplona’s main square, Plaza Castillo, which was hosting a large book fair with many booths set up in a large rectangle.

We turned back for camp so as to return later in the day in our car, park, and walk around.  As would become a pattern for us in later excursions, we got lost a number of times heading back to camp, a result of either not having a map, or if you have one not being able to read its fine print, combined with the penchant of folks in these parts to not believe in having very many street signs posted.  You can ride 2-3 blocks in one direction or another before you run into one, and then invariably, it is just a sign for the street you are on with no clue as to what the cross street is.  So we turned on the Garmin, asked it to get us back to Ezcaba and it faithfully guided us to camp.

We cleaned up and drove into town, parking a block away from the Plaza del Toros, the ending point for the famous Running of the Bulls event that takes place each year in July during the Festival of San Fermin.  We walked a couple of blocks into the historic center, concentrating on spending time on Calle Estafeta, which runs down one side of Plaza Castillo. 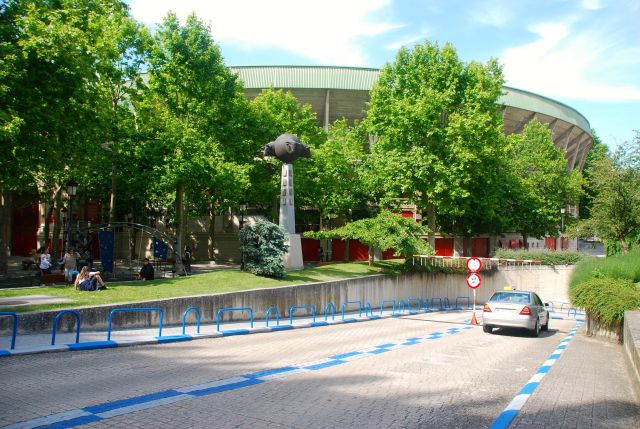 Being a bit hungry, our first two stops were at Tapa’s joints recommended in the Steve’s guide, Bar Cervezaria La Estafeta and Bar Gaucho.  We sampled six in total, four with a focus on ham or vegetable at the first place and two dynamite fish options at Bar Gaucho.  Including a glass of wine apiece at each place our tabs came to 20 Euros in total, proving as many had told us that Spain would be kind to our budget. 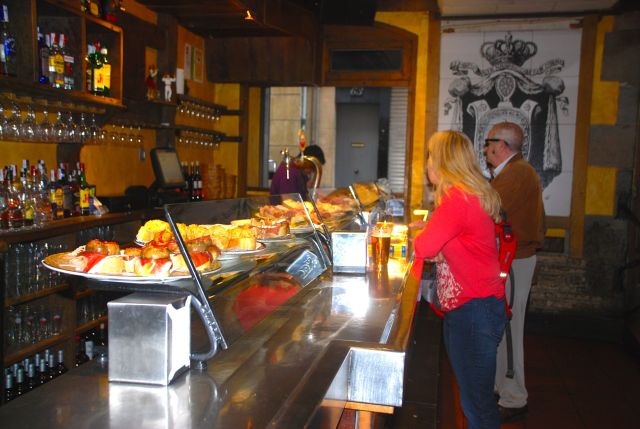 Our next stop was a well-known bakery Pasteleria Beatriz, where Joanna stood in a good-sized line to purchase a number of small fruit, cheese, or chocolate-based pastries.  A bag that stood up to some late night munching and breakfast the next day ran us 3.27 Euros. 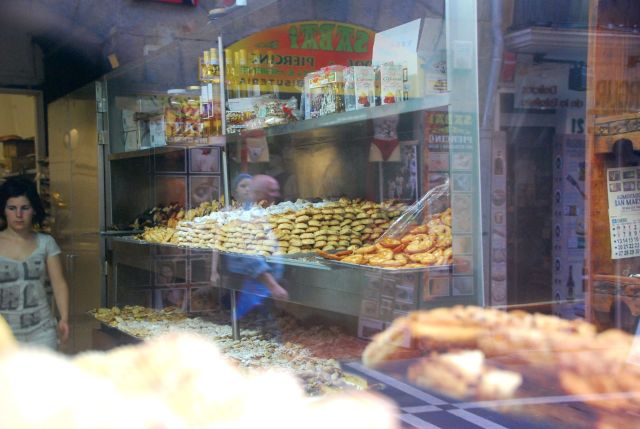 We returned to camp to find we had new neighbors, Dave Woolley and his girlfriend Jude, a British couple who were on a three-week spin on his motorcycle.  We would engage them in conversation throughout our stay, particularly as Dave was planning a trip to the States sometime in the coming year with the goal to cross the continent on the TransAm Trail, nearly 5,000 miles of riding.  His plan also involved storing his bike upon completion with a friend in Santa Rosa, returning at some time in the future, and then riding to the tip of Baja California.

Determined to get a longer ride in the next day we hopped on the bike path just outside of camp and rode it in the opposite direction of the day before, parallel to Highway N121-A, out of town.  The path closed out a mile or so after we started and so we rode another eight miles or so up the highway, steadily climbing as we went, our goal to reach the first of a series of tunnels we’d passed through on the way into town.

Although the road had a wide bike lane, traffic including large trucks whizzing by made it less than enjoyable and we pulled off onto a small side road that led us a couple of miles into the very small village of Aritzu.  Hitting a dead end, we turned around and rode back out the to the highway for our descent back to camp, to discover that our seemingly strong legs on the ascent were a direct by-product of a very brisk tailwind, that now turned into a brutal headwind.

We finished our descent, a bit tired for the effort but getting 22 good miles in.  After a shower and some rest, we made one more run into town to view the Rafael Huerta statue, Monument to the Encierro, that honors the Bull Run of Pamplona and to make a stop at Beatriz again for some morning fuel.

Monument to the Encierro

We stopped at the Dia on the way home to pick up a jar of pasta sauce, more bagged vegetables and, wait for it, another bottle of that really good white wine for a quick meal at camp.

The plan for the next day was for us to ride twenty mile portions of the St. James way out of Pamplona, me first and then Joanna, with the other person in the car, then drive the rest of the way to Burgos.  We went to bed excited about the next day’s prospects, wondering what kind of riding we’d get to accomplish.  Faithful readers will know by now that chances are disaster didn’t strike, but plans, as usual, didn’t quite work out as expected.

Monument to the Encierro: http://www.turismo.navarra.es/eng/organice-viaje/recurso.aspx?o=3310&masInf=1