Europe 2014 – Lisbon, Could this be California?

Following the routine that we’d established earlier, our plan for the next couple of days would be to try to get a couple of bike rides in before we left for Sevilla. We arose the morning of the 18th and set out just before noon intending to find a rumored bike path down to the ocean, about five miles away, where we would then contemplate riding north or south.

We turned out of the campground trying to follow a suggestion we’d received from a bike store while also keeping an eye on the Garmin. When it sent us off in a different direction we followed it up and over a steep hill that led into a nice dedicated bike path that lasted for about a mile, dumping us out on to city streets, which we did eventually follow to the coast. Once there, no good way to ride north or south presented itself, so we buzzed around a very large recreation area that also contained one of the two soccer (football) stadiums for the town’s two teams.

Realizing we didn’t have many other options we rode back towards camp. Not far from the finish, Joanna asked for the Garmin stating she wanted to do a few more laps in the nearby park, while I made my way back to camp. I’d woken up in a dark mood that day, similar to the one that plagued Joanna on the way to Porto, and so sitting in camp skulking about was just what the doctor ordered.

By the time Joanna returned my mood had lifted and, desperately needing to make a run to the market, we drove to a nearby Jumbo to pick up needed supplies. We returned to camp to make a dinner that included two nicely cooked chicken breasts and a pot full of rice and stirred in vegetables. Add a bottle of the consistently good inexpensive wine we get here and honestly, no dark mood can survive.

Determined to get a good ride in the next day we fell back on the strategy that had worked for us in Santiago, that is to drive out to the country, park and then ride. We started out by driving down to the coast, essentially the same route we’d ridden the day before on our bikes and once we hit the ocean we turned right and began to drive up the N6 towards the town of Cascais. This is gorgeous territory, very reminiscent of a drive up Pacific Coast Highway into Maiibu.

We left the city behind and began to drive up into open country. In the meantime we’d spotted a sign for Cabo do Raca, with the picture of a lighthouse next to it. Zounds, could this be the answer to our prayers? We followed the signs to the turnoff, which took us down a two-lane road downhill that ended up at the lighthouse. We parked the car, unloaded the bikes and set off back up the hill to the main road.

The View at Cabo do Roca

Thus began a hard, but delightful ride that would take us out to Sintra and back. The riding was very reminiscent of some we’ve taken along the California coast north of Morro Bay, or north of San Francisco. About five miles in we hit a four mile descent, fun to ride on the front part of ride, but tucked in the back of the mind was the knowledge that we’d have to climb that thing again. Our plan for the ride was to get close to 25 miles in, so with that in mind as we climbed up from the ocean to a summit, we decided to turn around at what would be mile 11, with that four mile climb back to the car coloring our thinking.

As I was sitting by the side of the road waiting for just a couple of moments for Joanna to catch up with me, I noticed a sign for a viewpoint. When she arrived I mentioned it and we both rode up a short patch of dirt road to get to the view. As we drank some water and snapped a picture, we noticed some impressive looking buildings across the valley, and wondered if they might not just be part of Sintra. I took a quick look at the Garmin and sure enough, we were just a kilometer or so away.

We rode back down to the road and then just a few meters to a curve with a sign that pointed us up to town. This is a popular destination for tourists, with royal retreats, estates, castles and buildings from the 8th-9th century, in addition to many buildings completed between the 15th and 19th century, including the Castelo dos Mouros, the Pena National Palace and the Sintra National Palace, resulting in its classification by UNESCO as a World Heritage Site in 1995.

Off we went, up a narrow, one-way cobbled street that required us to ride fast to keep from being run over by speeding cars. We crested in town and stopped at another viewpoint, this one with the Sintra National Palace dominating the view. We turned around and began our trip back to the car, finding that once we attacked it, that four-mile climb was just that, a climb like many we had done before.

The best part of the ride was the descent down to the lighthouse after we turned off the main road. It reminded me of many that we had ridden in the Santa Monica Mountains, including Stunt, Piuma, and Old Topanga Canyon roads. We loaded up the bikes and hit the snack bar for a well-deserved ice cream, then made the relatively short drive back to camp.

Road down to Cabo do Roca

We had decided earlier to go into town and treat ourselves to a nice dinner. We cleaned up and then took the bus to Praca de Figueira and sought out a recommendation from the Steves guide, the Casa Do Alentejo. The address wasn’t to hard to find, up a side street off the Praca Rossio, but we encountered some trouble when we tried to find it inside the building. Eventually we prevailed and found ourselves seated in a moderate sized dining room, one of many on that floor, but already filling up, and ready for a good experience.

And that is what prevailed. We split a delightful bread soup, hard to describe without any notes, but essentially bread soaked in an oniony broth. Joanna had fish and I went for another pork tenderloin. This may be hard to believe, but portion sizes were large enough that we passed on dessert. With a nice bottle of wine the total tab was 38.50 Euro, $52.36 when the charge came through.

Thoroughly satisfied we made our way back to the bus stop with plenty of time to catch one of the three busses still scheduled to run until quitting time. We stopped at a Pasteleria for some sweet stuff for breakfast and then settled in at the bus stop to wait. And wait. And wait. We ate the sweet stuff while waiting. Long story short, the bus never arrived. As we would find out later there was a big celebration of sorts back down by the harbor, and it may have disrupted the bus schedule.

Fortunately, there were other folks from the campground waiting with us and we were at a major square in Lisbon. So along with another couple, French, who we’d struck up a conversation with, we walked over to a waiting taxi and asked how much to go to camp. With the reply of ten Euro, we all jumped inside and took off.

Whatever was going on that night had totally screwed up driving in Lisbon, so our driver had to take a number of alternative routes to get us out of city center. It was like a thrill ride as he cut folks off, squeezed through narrow passages and drove far faster than any of us would have. But he exuded a calm and confidant nature, which made it all just, seem par for the course. We arrived safely back in camp, with the tab at 12 Euro, well worth the expense for a ride home and a great experience.
Our drive to Seville the next day staying off the toll roads would take some time, so we went to bed knowing we’d need to get up and move out. Lisbon had been good; well worth the time spent, knowing we could have spent more time there, particularly given Lisboa Camping’s facilities. Good bathrooms, fast Internet, cold beer. What more could a traveler ask for? 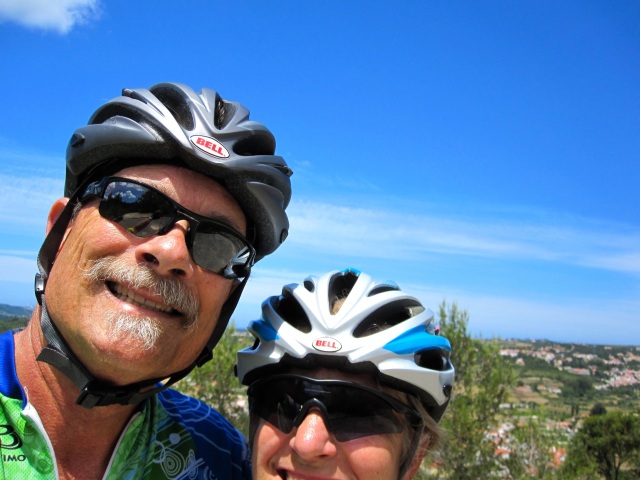