We returned to town the next day for a pair of tours recommended in the Steves guide, hosted by Conception Delgado.  The first, Sevilla Cultural Show and Tell was a nicely paced and informative 15 Euro visit that hit the highlights of the central part of town, full of background information about it, the lives of its citizens and some recommendations about where to shop and dine. 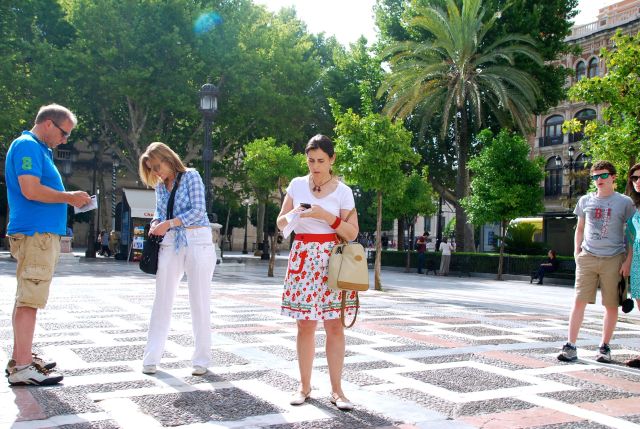 At the completion of the tour we took a brief break and then met Concepcion again in front of the Cathedral for our tour there.  For some reason that particular day I chose to wear a visor that featured the logo for UNC Charlotte and while waiting to start the tour a gentleman, part of a family group, approached me and asked if I was from North Carolina. 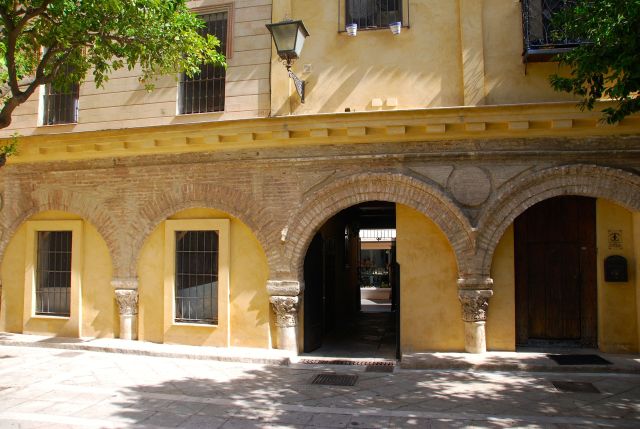 I responded yes and he said he was from Chapel Hill and then asked me if I was affiliated with UNCC.  He said he was the brother of the lead architect for the new student union there.  It was Kathryn Horne’s (who designed our student union) brother, Paul.  He and I exchanged some pleasantries about each other, I asked after Kathryn, and then the tour started and we lost track of each other.

What are the odds? This isn’t the first time this has happened to me.  Once in 1979 In Rome at the Coliseum I ran into an American I’d met two months earlier in England and in 1984, Joanna and bumped in to Elfreida on the underground in Munich, the girl I traveled with (along with Janis Levine) in Greece in 1979.

In Lisbon, we had a similar encounter, while waiting for the bus that never came our last night in town.  We spotted an accordion player we had seen more than once earlier while standing near a bus stop as we rode in and out of town, playing for money.  This time he wasn’t playing, just waiting for the bus like us.  Sometimes, the world is smaller than we give it credit for.  Maybe “Coincidence is just God’s way of remaining anonymous.”

The second tour wasn’t quite as good as the first as Concepcion had a conflict and turned it over to an associate.  Cathedral Sevilla is impressive.  It is the largest Gothic cathedral and the third-largest church in the world and the burial place of Christopher Columbus.  It’s bell tower, The Giralda, is the former minaret of the mosque that stood on the site under Muslim rule, and was built to resemble the minaret of the Koutoubia Mosque in Marrakech, Morocco. It was converted into a bell tower for the cathedral after the Reconquista. 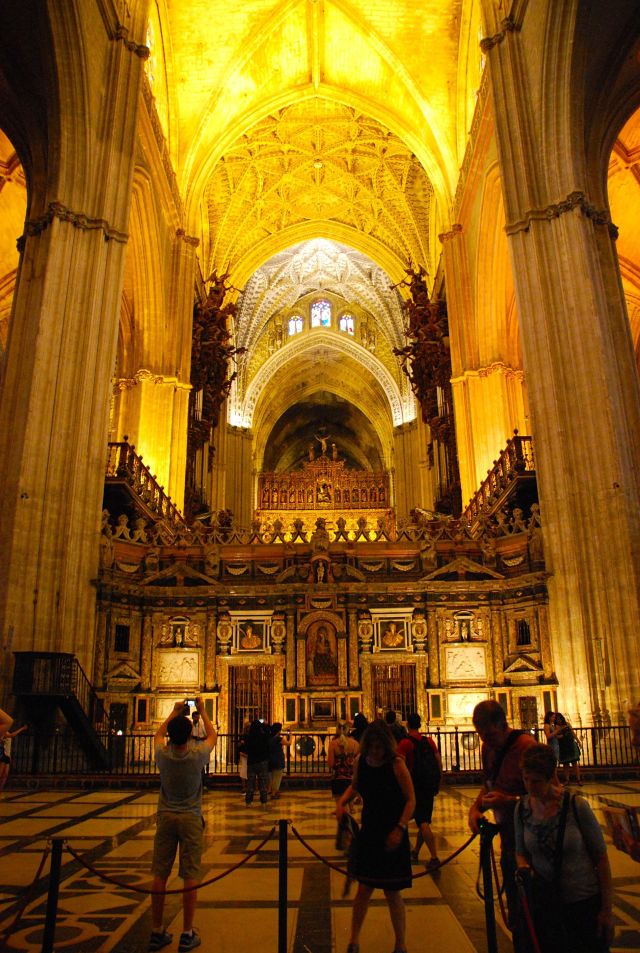 Unfortunately, after a while the cathedrals start to run together and unless you are an expert, you begin to become a bit jaded about each new visit.  We finished with the cathedral grabbing a snack in town, and after some consideration, decided to abandon our original plan of heading over to the Alcazar to tour it.  The plain fact of the matter is that after nearly four hours of walking tours, we were quite tired.  So we made our way back to camp to pick up some simple supplies at the camp store, make dinner, and settle in for a quiet evening. 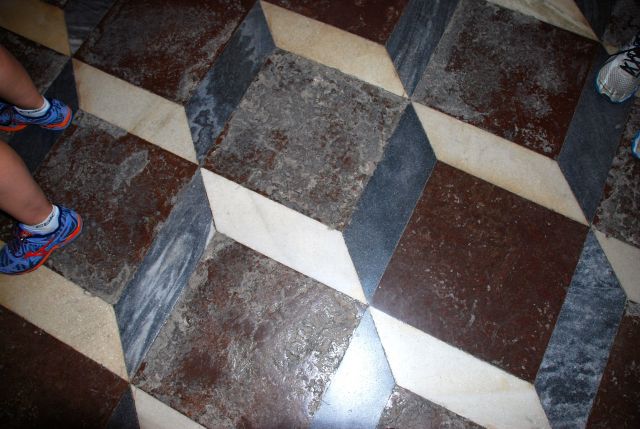 The next day dawned bright and clear and we set out on our bikes to ride what we thought would be an uncomplicated 25 miles or so round trip up to the small town of Santiponce to visit the Roman Ruins known as Italica. 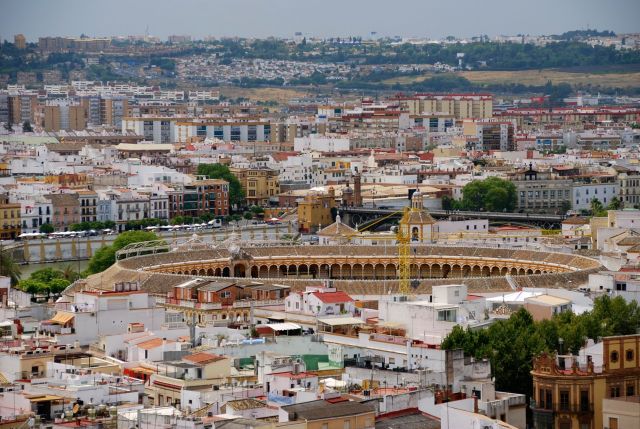 Bull Ring from the Bell Tower

We set out for town, following the first part of the route we’d ridden two days earlier.  Joanna had been experiencing problems with her front disc brake and we stopped in at the Trek Store to see if they could help.  As I turned off the street to climb up the driveway, my back wheel caught a piece of plastic and for a moment, I thought I was going to go down.  Luck prevailed though and I made it safely to the shop, which we entered and even with the language barrier, they accommodatingly made the necessary adjustment so that the front wheel no longer howled like a banshee.

As we approached the center of town the Garmin sent us off on a street that would skirt the east side of town and which we subsequently rode for quite some distance, dodging busses and taxis, constantly stopping and going.  At around mile 12 we finally broke clear of town and found ourselves on a two-lane road that sent us in the direction of Santiponche.  We rode for four more miles and began to become concerned about the ominous looking storm clouds ahead of us, propelled by a fairly strong wind.

Not knowing how many more miles we had to ride to get to Italica, we prudently decided to turn around and head back to camp, knowing we had about sixteen miles to cover.  As we entered the more congested part of the city we, as can be expected with the Garmin, got off course in a roundabout.  We selected the option that seemed like the best choice and as we rode a short distance, Joanna called out “this is the route we rode the last time”.  Sure enough, we’d come upon the end of the bike trail from the day before.

Why the Garmin would have sent us through the congested part of town when we could easily have ridden on the path is a mystery for the ages, but a condition we will just have to adjust to.  So we felt good for the first time on the return, knowing the route home and that it would be easy to ride.  As we passed the center of town our luck turned a little as it started to rain.  Normally wet pavement is not a great concern; you just slow down a little and watch for slippery surfaces.

The unknown dimension for us would be how the painted surface of the bike path would react to the rain.  We could have opted to ride on the street, but it was still a somewhat congested part of town and it was rush hour.  So we stayed on the path.  As we approached the end and the transition to the road that would lead us back to camp, I came up a ramp and made a left turn to continue on the path.  As you can guess by now, my rear wheel slipped out from beneath me and I went down.

I could feel my helmet hit the pavement (which is why I always wear one) but the same rain that had made the path slippery allowed me to simply skid on it as if on a slip and slide.  As I lay there for a moment or so to collect myself a local business owner rushed over to see if I was OK, and stayed with us until I determined that I was well enough to ride the rest of the way.

Crashing your bike is never fun; I was fortunate that it would turn out to be not that serious.  When you get back on your bike though, the adrenaline is pumping and those final miles melt away beneath the buzz you’ve acquired.  It’s later on in the day, and that evening, when those places that don’t like falling off a bike begin to speak their mind that the reality of hitting the pavement rears its ugly head.

Fortunately, a good dinner in camp, a bottle of wine between us and then the rest of a bottle of Port provided some measure of relief.  We were excited about the next day, when we would drive to Gibraltar by way of Jerez, the home of horses and Sherry.  Besides the occasional bike crash, what more could a traveling couple ask for? 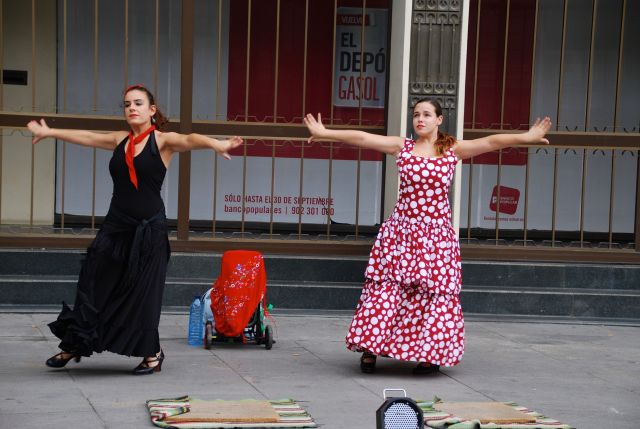