Europe 2014 – Granada with the Ronda on the Way

We got a fairly early start out of Gibraltar, as we wanted to complete our plan to sightsee on the way to Granada.  We had two potential destinations in mind; the Nerja Caves or the city of Ronda.  Only one of the two was possible as they lay in different directions from each other.  After reading up in the guide, we felt that Ronda was the better draw as it represented a unique destination, a picture perfect white washed town perched Cliffside.

For the first thirty minutes or so, we drove along the coast of the Mediterranean, sparkling blue water to our right, with much development on both sides of the road.  This is the Costa del Sol, resort and vacation country, one of the most popular in Spain.  We then turned north on A-369 and climbed up a spectacularly picaresque mountain road, eventually reaching the peak at 3,000 plus feet in elevation. For the last week or so, and now even more so, we felt like we were driving through parts of Southern California.  Mountainsides covered in chaparral and scrub oak, with a glimpse of the sea in the rear view mirror.

We descended into a broad valley and climbed again into Ronda.  As you enter the outskirts of town there is no sense of what we would eventually see.  We found easy parking and then walked a quarter mile or so to the more famous of Ronda’s two bridges, the New Bridge, built from 1775-1793 to replace one that had lasted only six years.  Views were as described in the guidebooks, the white washed old Moorish town (La Ciudad) across the gorge (360 feet down, 200 feet wide) and the new town (El Mercaedillo) built after the Christian re-conquest in 1485.

New Bridge as You Enter Town

We walked across the bridge to the New Town to take in a tour of the bullring (Real Maestranza de Caballeria de Ronda), Ronda being known as the birthplace of modern bullfighting.   In the early 1700’s, there were two types of bullfighting, one with knights on horseback and the other a man-versus-beast with no rules.  Francisco Romero melded the two types of fighting with the rules and style that exist to this day in this very ring.

The tour was extensive and culminated with an indoor visit to the museum, which includes exhibits on the history of bullfighting as well as an extensive collection of horse gear and guns, including a small room full of cases of dueling pistols.  We finished our tour and walked towards the Mercadillo Quarter to get to the Jardines de Cuenca Park, which offers an amazing view of both the gorge and the New Bridge. 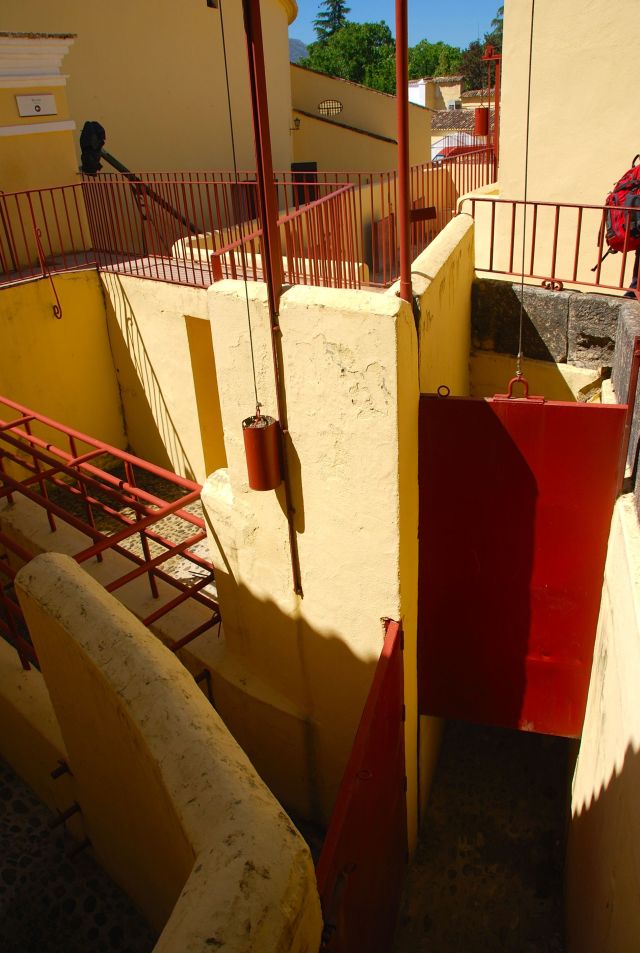 Quite hungry by now, we walked back up the hill to find a spot to eat.  We stumbled upon a small bar on a corner and entered, sitting at the bar and ordering two beers that came with the oft-offered plate of complimentary olives.  We asked about food and were handed a menu, which listed a number of one Euro Tapas.  We ordered a modest selection, including two kinds of croquettes (chicken and spinach), ham and tomato toast and fried calamari’s, which we thought would be squid but turned out to be some kind of cheese. 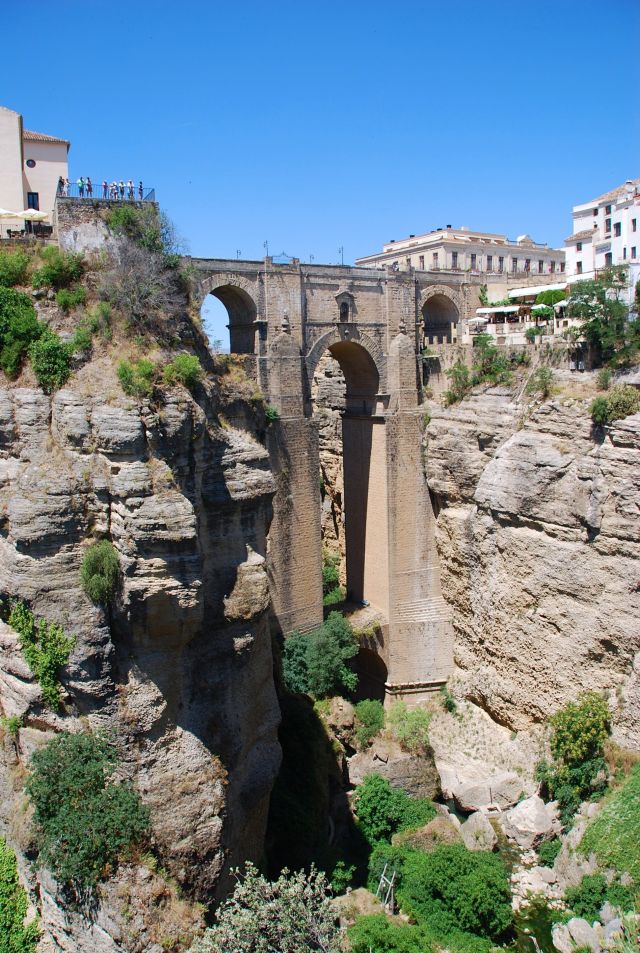 Thoroughly satisfied, we walked back out of town to the car, had a small adventure trying to find the exit (if we don’t get lost or confused at least once a day it is not a normal day of travel for us) and finished the drive, uneventfully, to Granada.  We arrived at Camping Isabel Reina, checked in, set up camp and spent some time at the nice pool there, then picked up a few supplies at the small market and made dinner.

The Pool at Reina Isabel

Into town the next morning we embarked on our standard Steve’s guide walking tour to introduce ourselves to Granada and the logistics of transportation in and out from camp by bus.  As we needed to print out the tickets for our scheduled visit the next day to the Alhambra, we started the tour at its end, at the top of the Plaza Neuva, near Church of Santa Ana where we stopped in at the TI to get a map.

We walked up Carrera del Darro (the Darro is the river that feeds the town) once known as the walk of the sad ones as it was the route of funeral processions to the cemetery at the edge of town.  After some blocks and some sights, we stopped at Paseo de los Tristes with its view across the river and up the hillside to the walls of the Alhambra.

From there we backtracked down to Plaza Isabel la Catolica, the intersection of Granada’s two grand boulevards, Gran Via and Calle Reyes Catolicos.  The plaza hosts a fountain topped by a statue of Columbus unfurling a long contract with Isabel, listing the terms of one of his first voyage.  We would take the bus the next day from here up to the Alhambra. 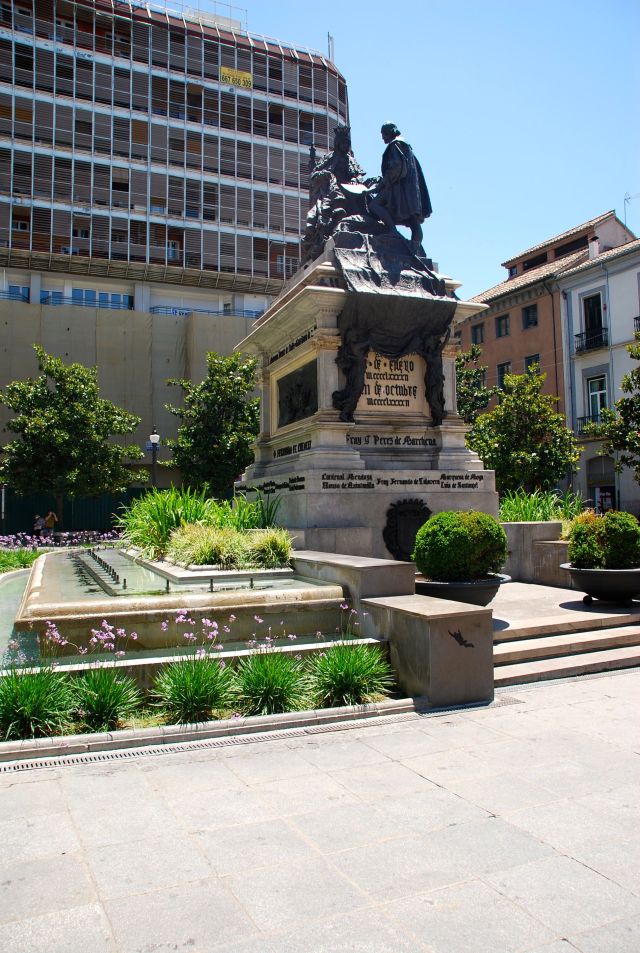 We walked down the Gran Via and stopped in at an Expresso, a franchise type pizza shop, selling different slices, enjoying good, filling pizza and access to Wi-Fi.  Exiting, a left turn took us to Royal Chapel Square, once ringed by Moorish buildings but with Christian rule the madrassa (school) became Granada’s first city hall.  From there we walked down the street to the front of the Cathedral, which we would end up not visiting. 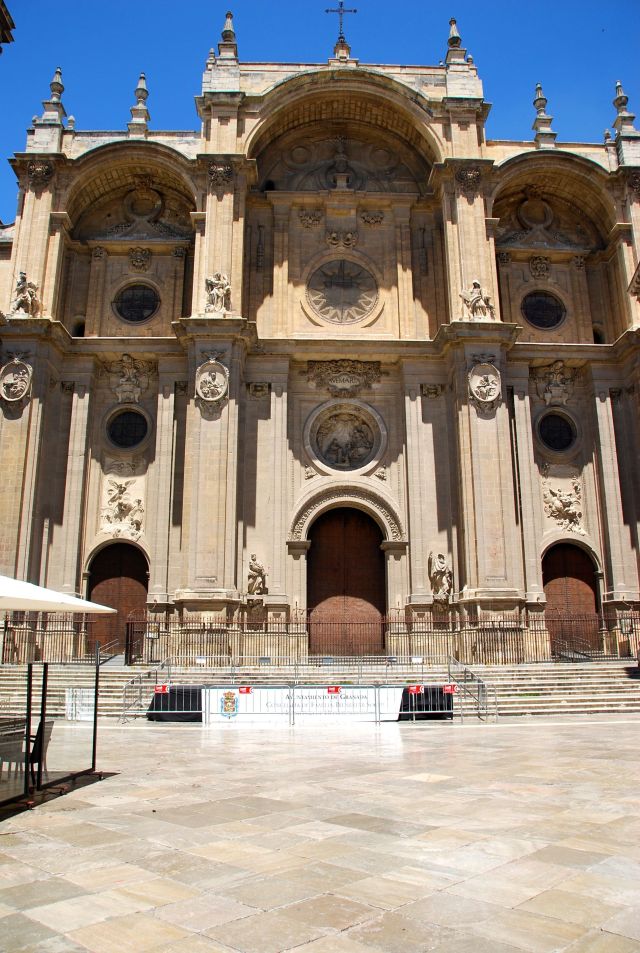 From there we entered the Alcaiceria, originally a Moorish silk market and now a grid of tiny shopping lanes, and finished our walk at the Corral del Carbon.  This is the only surviving caravanserai (a protected place for merchants to rest their camels, spend the night, and get a bite to eat.

We began our walk back out of the center of town to our bus stop.  On the way, just before the plaza with our stop, we spotted a Mercadona, a Spanish supermarket chain we’d not yet visited.  We stopped in and picked up supplies for dinner.  Joanna had expressed a desire for a fruit salad the day before, particularly given the warm days we’d been experiencing and we picked up the necessary ingredients to make the salad, plus a rare find here in the south, some aged cheddar cheese and a baguette to finish off the meal. 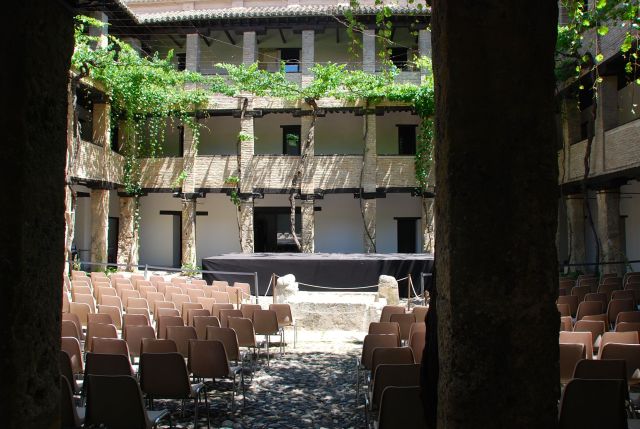 The day before we’d discovered that the camp store had a decent chilled Lambrusco for 3 Euros. I bought a bottle and some ice and upon returning to the campsite, poured some of the wine into the salad to sit before we ate it.  With the ice, I made us a new mixed drink creation, a quarter cup Lambrusco, one shot of the vodka I’d picked up in Gibraltar and finished with our new favorite beverage of choice, Fanta Zero Naranja (zero calorie carbonated orange soda from Coca Cola).

Upon our return to camp our new next-door neighbor Chris came over and asked about our license plates, and mentioned he was from British Columbia.  Thus would begin a couple of days of conversations, our first in quite some time, with someone from close to home.  An independent contractor, he had an interesting philosophy about life and money in general, working for a year or so on projects and then taking off for another year or so to travel. 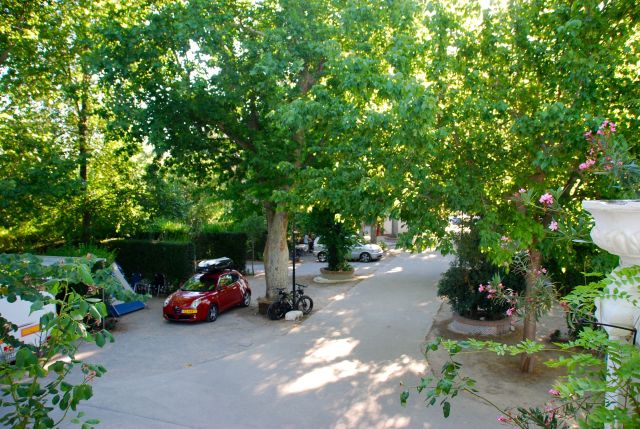 Reina Isabel from the Pool

It had been a good first day, like so many others.  Begun with the sense of uncertainty and anticipation one gets in any new town.  A good walking tour, exploring sites and getting a feel for a part of town we’d walk again, and then a return to camp, confident about bus routes and directions, a fine meal to lead us into a quiet evening working on the computer at the patio of the restaurant in camp.

We then experienced our second encounter, this time with two motorcyclists touring Spain, Julius in his early twenties from Bamberg, Germany and Mike, his older friend from New Zealand.  We would meet them each of our next couple of nights in camp and converse for an hour or two.  What are the odds we’d have two such encounters in the same place after so much time on the road? That’s the beauty of travel like this, the random nature of day-to-day living. 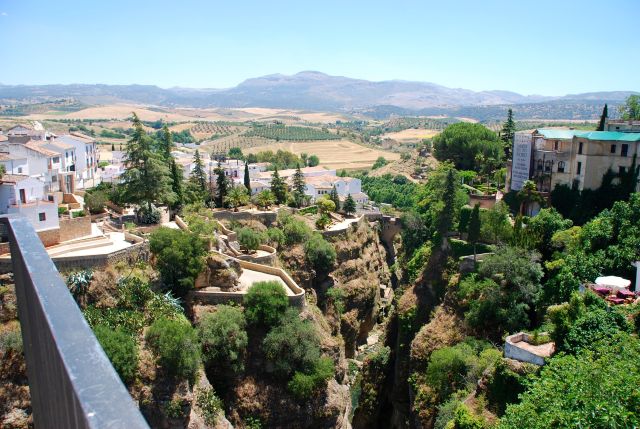