Having been up late the night before for the big announcement, we slept in on Tuesday and got a later start knowing that the next day would bring an early departure, as we would be checking out of the Cosmos and heading out to Versailles.

We left mid-morning and on the way to the metro ran into a street market that drew our attention, spending a rewarding amount of time there as we found some bargains on souvenirs and a couple of much needed electronic gizmos.  We finished up and made our way via the Metro to view and tour of the Arc de Triomphe. 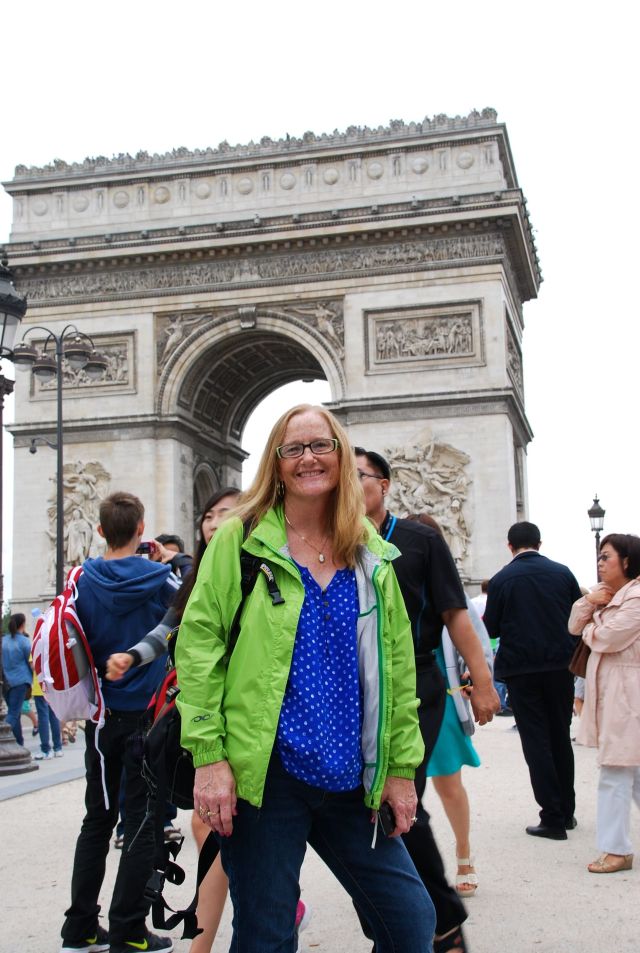 Bev at the Arc de Triomphe

Napoleon had the Arc commissioned to commemorate his victory at the battle of Austerlitz and at 165 feet high and 130 feet wide, there is no other arch it’s size in the world.  It is truly one of the icons of Paris and its setting in the Place Charles de Gaulle circle with 12 converging boulevards, is a must see sight.

With the ongoing costs of entering these monuments, churches, and museums adding up we continued the practice of having just one of us accompany Bev to the top of the Arch and I was elected.  One positive element of climbing lots of stairs to get to spectacular viewpoints is that many calories are burned up and thus; tasty snacks are needed to refill an empty tank.  That being said, you still have to climb up those stairs.

I’d not been to the top of the Arc before and this was my first look from this vantage point.  Travel and other activities (books, movies, events, etc.) can be repeated and not get boring because you now see that familiar view from a different place, or perspective.  Thus viewing Paris from the top of the Arc; it was if I was seeing the city for the first time.

We descended, picked up Joanna, and began a leisurely stroll down the Champs Elyssee towards the Place de la Concorde.  Our pace was dictated as much by the large crowds of people also out and about, as by our own tendency to poke along window-shopping.  As we approached Avenue Winston Churchill, near the bottom of the slight downhill of the boulevard, it started to drizzle.  We crossed over to the Gran Palais, which is now used for art exhibitions, conventions, or conferences, pretty close to its original purpose.

It was closed and as the rain started to come down harder we dashed across the street to the Piti Palace (Built for the Universal Exhibition of 1900, like its neighbor the Grand Palace across the street), always closed in the past, wondering if we would get to see it this time around.  It was open, offered a place out of the rain, and admission was free.  Almost two hours later as it was closing, the three of us re-connected (museums and gallery seem to require that you move at your own pace) and remarked on how much there was to see, and how little of it we’d witnessed.  It will be a place to re-visit during our next stay in Paris. 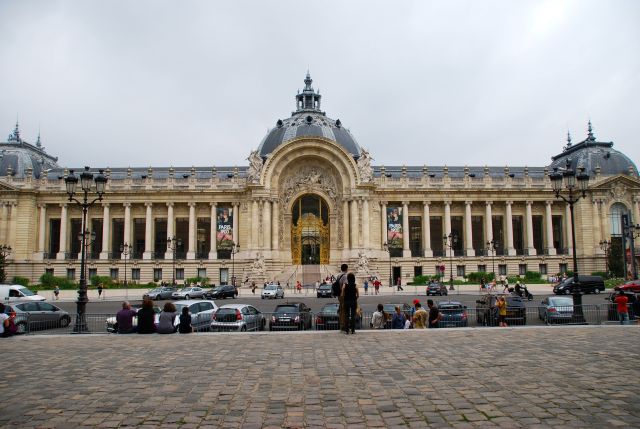 We made our way back to the Cosmos via the Metro to recharge our batteries and gather up some steam to prepare for our next quest, the nightly light show at the Eiffel Tower.  Back out on the metro, we exited at Trocadero station, on the other side of the Seine at Palais de Chaillot.  This is that large building housing architectural, naval & ethnographic museums that one often sees in pictures from the top of the tower (see post of August 17th).  Thinking the show would start at 9pm and it being 8:30, we grabbed a quick ham and cheese crepe from a nearby stand and made our way out to the end of the plaza to a spot from which to watch the show.

When 9pm rolled around without any light show, we realized that it not being dark yet, it wouldn’t likely start until 10pm.  How do you spend an hour on a warm evening in Paris, locked into one spot?  You people watch and marvel at the diversity of your fellow travelers.  About twenty minutes before the hour I moved back into position at the rampart, centered on the tower to make sure the pictures I’d take were aligned.

It started to get crowded and I felt a jostling to my left and to my surprise a young couple, dressed in nice clothing were hopping the metal barrier and climbing atop the rampart to stage a proposal scene.  Whether this couple was for real, or if it was a scene for an assignment, I’ll not know but the perfect shot I’d envisioned of the Tower lit at night now had them in the frame. 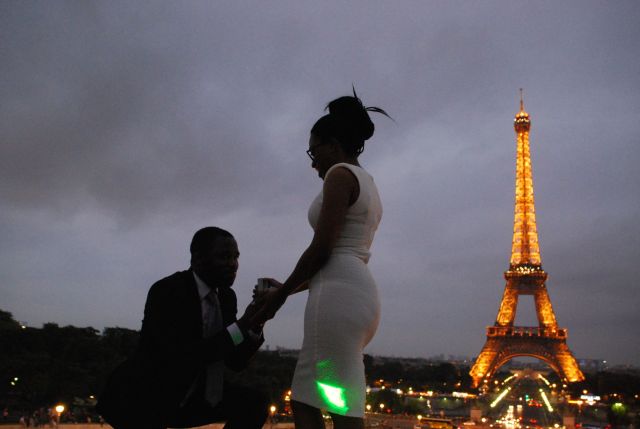 Such is life.  The crowding intensified as we neared the magic hour and I had to work hard to maintain my position, but managed and as the Tower lit up, shot a number of pictures during the show.  This is not the best venue for a still camera as the lights dance all around the structure; a still only captures a moment of the movement.  Of course, we’d left the Go Pro back in the room, which had been and would turn out to be a common occurrence for us, to either forget it or have it run out of battery when we needed it.

At the completion of the show we returned to the room and prepared for our next day when we would check out of the Cosmos, haul our luggage out to Versailles (they store it for free) for our visit there, and then rendezvous with Francois to go to dinner at old friend Claude’s house, about 20 minutes from Montigny.

It had been a good first few days in Paris for us.  We’d kept Bev busy and hopefully seen the sights she wanted to take in.  It was a treat for Joanna and I to stay in the city for a change and we left with the thought that we might not be back for some time, particularly with Francois’ plans to move to Montpellier.  This place so full of memories for us, enough to last a lifetime. 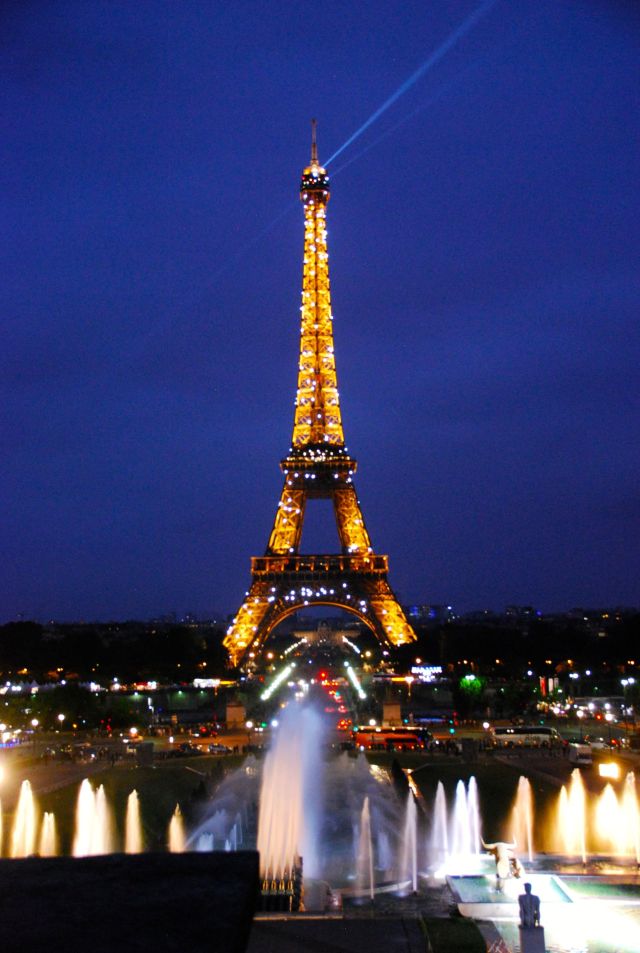