Holiday 2014 – Los Angeles; Time to Connect with the Past 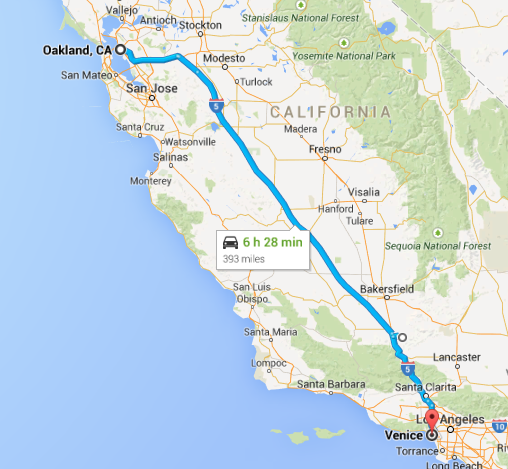 The drive to Los Angeles on Monday went quickly enough, traveling the familiar I-5 south through Central Valley farmland and cattle ranches. We’ve registered countless thousands of miles of travel on this stretch of highway and watched it develop from a lone ribbon of concrete with virtually no services to a heavily traveled route with clusters of motels, gas stations and fast food joints every twenty miles or so.

One of the original outposts along the way, situated at the turnoff to Coalinga is the Harris Ranch Inn and Restaurant. The restaurant was targeted to local farmers when it opened in 1977, but later became popular when a 153-room luxury inn was added in 1987. Featuring beef grown in its own operation, one can always count on a hearty, filling, and satisfying meal here. 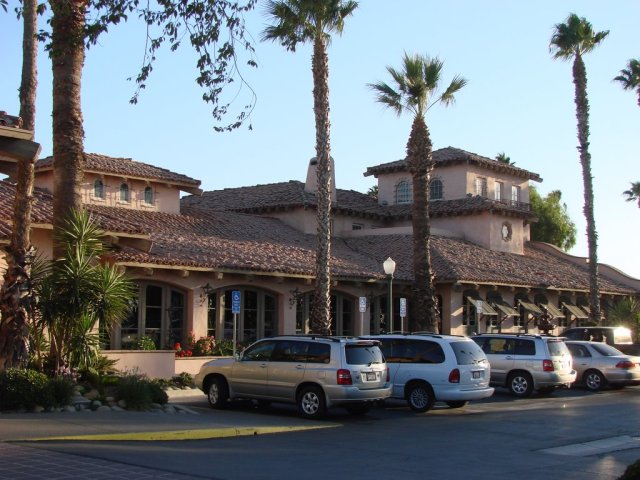 We arrived at Joanna’s Mom’s house late afternoon and after relaxing for a bit, met our former Wade Street neighbors Marilyn and Jason for dinner at Paco’s Tacos. Having had the Paco’s Burrito (Chile Relleno, lettuce, beans topped with cheese and sauce) during our recent stay in Los Angeles and plenty of fried tacos in Vegas and in L.A. at my other go to joint, Campos, I settled for a Carnitas Tostada and Joanna the Calamar Oaxaca (mushrooms, wine, lemon, shallots & butter). Add in a pitcher of Cadillac Margaritas and more chips and salsa than is reasonable to consume and you have the recipe for yet another great experience at the restaurant I miss the most. 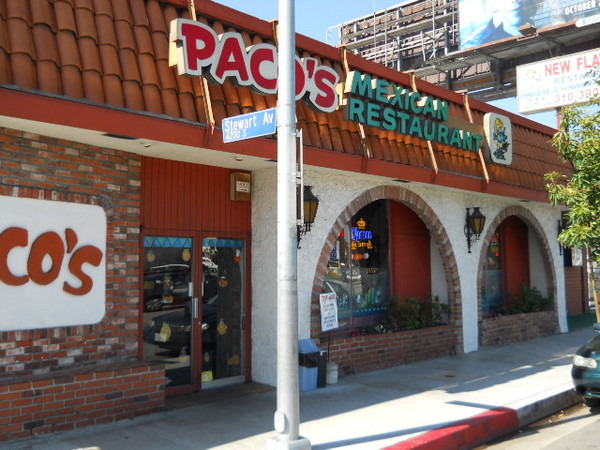 The next few days would give me an opportunity to connect with many old friends and favorite places while Joanna and her Mom kept busy with errands and a couple of day trips. First up on the agenda for me was to meet up with Ron, long time friend and father of one of Jessica’s best friends, Chelsea.

As we only had a couple of hours that day our first stop was one of his favorite hangouts, Typhoon, at the Santa Monica Airport. The owner was sitting at the bar when we walked in and we had a pleasant conversation with him, finishing up our one beer there and then making our way up Cloverfield to Pico and The Daily Pint, a bar that looms large in the trajectory of my life.

Along with other friends, I’ve been going to this place since it first opened, taking over from a dingy, dark, hard core drinker’s bar called the Orbit, where we’d gather to watch blacked out Oakland Raiders football games. I played softball at the time on the Bru-Crew (or Brew Crew), a great group of guys that would play competitively for close a decade or more. For a couple of years Harvelle’s, a blues bar in Santa Monica sponsored us until the fellow that acted as the team’s manager used the uniform money given to us by the bar to pay his rent.

The Bar at the Daily Pint

We forgave our manager (we wisely didn’t let him handle the money anymore), The Daily Pint would agree to sponsor us, and the rest is history. Every week for quite a few years we’d show up there, after our games, after Sunday afternoon practices, whenever the mood suited; it truly became our bar. Ron and I tucked in for one of the 33 beers on draft and then feeling hungry, made our way down to Lincoln Boulevard in Venice to eat at another long time favorite, Great Western Steak and Hoagie.

My fondest memories of this place are those times when we’d go to a concert at the Santa Monica Civic Auditorium (a great venue where I saw, among others, The Eagles, Steely Dan, Poco, Bonnie Raitt, Loggins and Messina, Traffic, etc.) and roll out of there, buzzed as we would have been in those days and seeing food to ease the munchies. We get our sandwiches and often sit in Rendy’s Ford Pinto, the windows fogging up from the heat of the food.

I ordered my standard, the Pepper Mushroom Cheese Steak with onions and pizza sauce. Thin slices of ribeye grilled on the flattop next to a pile of bell peppers, onions, and mushrooms. Lay cheese on top of the cooking steak, fold it into a fresh ten-inch French roll, lay the vegetable mixture on the meat and spoon the marinara sauce on top. This is a dangerous sandwich as it is like a hot from the oven slice of pizza; the smell and sight of it is so tempting you rush to get a bite, resulting in a nasty burn to the roof of your mouth. Time, experience and maturity have taught me to wait a few moments before taking that first bite, and I usually prevail. Usually but not always.

Ron and I finished up our sandwiches and he dropped me off back at the house. Shortly thereafter I drove the Highlander back up to the Daily Pint to rendezvous with a few of those old friends from UCLA and Bru Crew days, Jacques, Scotty and the Harv. Jacques’ wife Carol joined us as well (another UCLA connection) and we spent the evening catching up, reminiscing, and talking about mutual friends near and far. Upon his retirement Jacques took up acting and has been featured in many stage productions and some film projects. Scotty teaches English at the Community College level and the Harv is an accountant for a movie studio, skills he began to master when he worked for me as a student employee back in the day in Financial Control at ASUCLA. 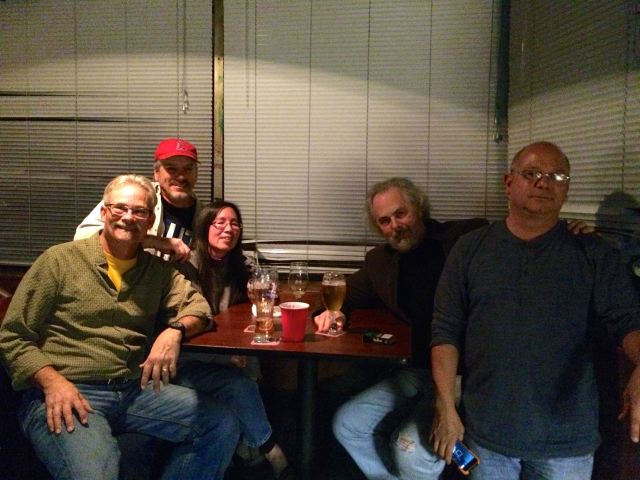 It was a great evening, full of the joking that always lay at the heart of our friendships. The Pint for me is a special place, where memories come to life and where old friends can be young again, if only for a few moments. If you’re in the neighborhood sometime drop by. Their collection of bourbons, whiskey’s and single malt scotches will please your palate if you’re not a beer drinker. And who knows, you might just get asked to join a softball team.