The weather cleared up briefly the next day giving us an opportunity to catch a bike ride, get the car washed and then later meet up with an old friend. It had been warm and muggy when we arrived the night before and this continued on into the next day, so after breakfast we hopped on the bikes and rode to the border of the campground to cover the length of the southern portion of the Salado Creek Greenway.

We’d end up riding this section twice during the week given that cycling options on the street close to camp weren’t very good, as we were advised by the KOA staff. So we made the most of our sojourns up and down the path, getting close to twenty miles in each time we rode it. Once back to camp we cleaned up and took off to hit a drugstore to pick up some supplies, which ended up landing us at a Wal-Mart instead, an on the road resource we utilize when traveling but rarely frequent when at home.

We got the car washed and then made our way over to the northeast side of town to Dave and Jesse’s condo where we’d meet up and head out to dinner. We’ve known Dave since the early 1980’s when I met him on a backpacking trip he had organized to the Havasupai Indian Reservation to see Havasu Falls. Dave would go on to work for the Federal Government, at first running recreation programs for the military in Germany and then working his way up through the ranks of management.

We visited he and his then wife Cindy three times in Europe, all in Germany; in Ansbach in 1982, Giessen in 1984 and Kaiserslautern in 2007. In between they lived in Long Beach and Bellingham, Washington. After his last stint in Europe he returned to San Antonio where he and Cindy separated, as has happened with a few couples Joanna and I know. He’s found a lovely lady, Jesse, to share his life with and this would be our first opportunity to meet her and get us both up to date since our last meeting in 2007.

After some brief catching up at the house we jumped in the car and drove over to one of their favorite Tex-Mex restaurants, La Fogata. It was still warm and so we opted to sit outside on one of the lovely patios, taking our seats and ordering the house Margaritas, working through our basket of chips unable to resist dipping them into the salsa, stopping only when the basket was empty.

Joanna had a Chili Relleno and I the Crispy Tacos a la Plancha, one each of ground beef and shredded chicken. Both entrees came with rice and beans and were tasty (though the tacos came in a molded shell, but I’ve come to expect that) and what surprised me, and would be the case throughout our travels in Texas, was how expensive this style of food was. Joanna’s Chili Relleno plate was $16 and while good, shouldn’t have cost more than $10-$12.

We finished up our meals, drove back to their house and then made our way back to camp. It had been a good start to our first day, a nice bike ride, catching up with an old friend, and a good meal. The temperature began to drop and would cool off in the coming days. Rain was in the forecast and we’d have to space out our activities to try and maximize outdoor pursuits when it was dry. Dodging in and out of the conference, which started on Wednesday, would complicate this but we’d manage none-the less.

That being the case, we got out early Wednesday morning to make another pass at the southern section of the Salado Creek Greenway, then cleaned up and Joanna dropped me off at the conference hotel, the Marriott Rivercenter. Jim had checked in ahead of me and so I greeted him in the room. We had a couple of his favorite drinks, gin and tonics with Bombay Blue Sapphire (I always make sure to bring the gin, tonic, and limes) starting off the conference in fine fashion.

The Bar is Open

Conference activities flowed for the next three days and kept us busy. Jim and I did slip out on Friday to take in the Alamo, which is located a couple of blocks from the hotel. Television and movies have done much to color our perception of the physical location and the events that took place here back in 1836 and none of it prepares you for what exists today. As we found so often in Europe, places where important events took place don’t seem so important at the time, and the passage of time can mean that subsequent generations tear down, build on top of, or totally neglect a site that one would now think should be preserved as a historical artifact.

The Church at the Alamo

Such was the Alamo. Little of the original structure still stands; the main remnant being the Church, which was built in 1744 as part of the Spanish mission established on these grounds. In 1903, the Long Barrack was saved from potential destruction by the Daughters of the Republic of Texas (DRT) and would eventually become the “Shrine of Texas Liberty’s” main display center. They’ve done a thorough and interesting job of portraying the events, the players, and the actions leading up to the famous battle fought here. We spent an enjoyable 90 minutes or so touring the grounds and perusing the exhibit before returning to the hotel to resume our conference duties. 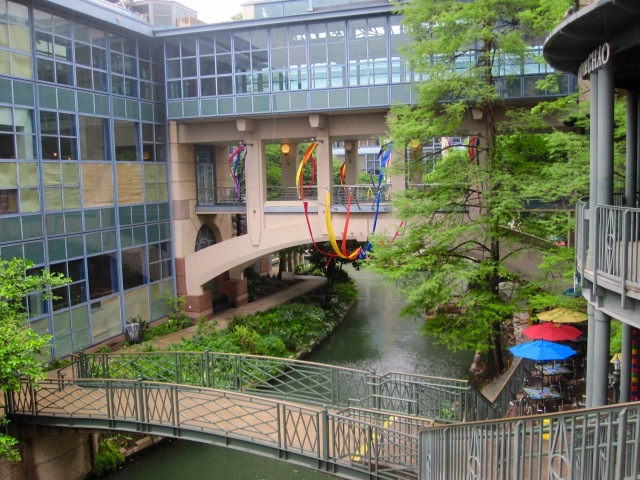 The Riverwalk near the Hotel

Friday evening Joanna came in from the KOA to join a group of us that have been dining together at conferences for a number of years. It started small and informal a little over ten years ago at the Chicago conference when I joined Mark and Chickie to venture to a great Cajun restaurant. From that point on whenever we could, the three of us would seek out interesting food offerings in conference towns, leading us to a superb Mexican joint in Reno and an outstanding roadhouse in Kansas City for BBQ and Blues.

Starting in Anaheim in 2009 the group expanded and the focus became red meat and red wine. Excellent steak house experiences would follow in subsequent years in New York, Boston, St. Louis and Orlando. Our selection for San Antonio was Bohanan’s, an upscale establishment a 15-minute walk from the hotel. Our modus for these meals has been to split the check evenly, which encourages all to enjoy a full range of menu items and beverages. Patrick is always in charge of the wine selection and does an outstanding job of finding good quality at a reasonable price.

Kathy had the waiter prepare a combination appetizer selection for us consisting of lump crab, shrimp, and ahi tuna, each served to us on our own individual plates. We all ordered some cut of beef and the quality is what one would expect from a steak house of this level, along the lines of a Ruth’s Chris. What we weren’t prepared for was the overall total for the bill of $1,425, which broke down to $151 apiece, by far the most money I’ve ever spent on a meal. The appetizer plates alone came to $28 per person.

We all ponied up and walked back to the hotel, the bill being the topic of discussion. As we would come to discover later, after examining an itemized copy, two of the diners inadvertently ordered steaks, one an 18oz Bone Fillet, at $89.95 apiece. They’d been offered these from a tray that was presented to the table and as in many restaurants; no mention was made of the price. The take-away from this experience? When eating at an expensive steak house, always ask what the price of the house’s special cuts of beef cost.

One positive outcome of the evening was that in talking with Mark and his girlfriend Roberta, it turned out that the two of them would be venturing up to Austin on Sunday just like us. We agreed to connect while there and looked forward to the time as Roberta had lived there for many years and knew the town well. It would turn out to be a great time, as we shall see in the next post.