We met Roberta and Mark at Mellow Johnny’s as planned and spent a bit more time there perusing the stock, particularly the attractive jersey’s and short combinations (kits) offered. Unfortunately like most good bike clothing, they were a bit more than I wanted to spend at that time. I instead opted for a nice Mellow Johnny coffee mug.

Finishing up at the shop we walked a few blocks over to Sixth Street to our dinner destination, Bess Bistro. Opened in 2006, it is owned by the actress Sandra Bullock, it sits one floor below street level. Entered via a canopied stairway, it features an interior of historic brick columns and arches, iron railings, and old timbers updated with custom tile, etched glass, and artwork. Overall we had a good time as evidenced by my review in Trip Advisor:

My wife and I enjoyed a nice meal at Bess Bistro with another couple last night. It’s a charming place, downstairs off the street, nicely decorated. Wait staff is professional and efficient, don’t hurry you and allow the meal to take its own course. We started off with two of the same appetizer, the fried Artichoke is a very nice dish, particularly since I’m not a big fan of this vegetable. It was quite good, lightly fried in semolina crust with crispy spinach, three slices of fried lemon (trust me, they were good) and a garlic aioli to accompany. I ordered the Halibut, which came with gnocchi and a blanc buere sauce with peas. It was quite tasty. My wife had the Kale salad (thyme-roasted baby carrots, marinated feta, candied pecans, apple cider vinaigrette) again tasty and a nice sized serving. I give the place an average though as the food wasn’t magical and the prices, $35 for the Halibut and $12 for the Salad seemed a bit high on my food-o-meter. I’d recommend going there for a special occasion as the overall ambience and service would offset the prices and make for a nice night out. 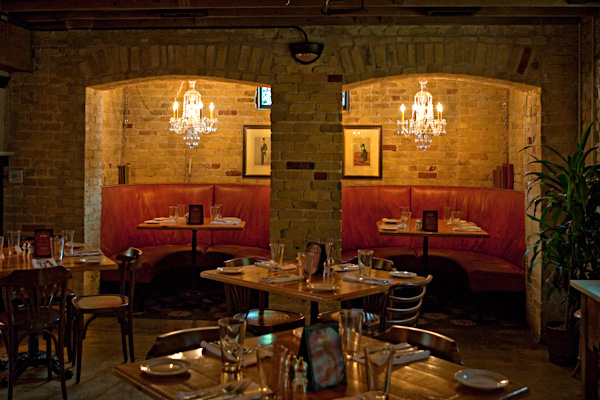 Our Booth on the Right at Bess Bistro

Finished with our meal we drove separately down to the area of Austin below Lady Bird Lake known as SoCo (for South Congress). Our destination was The Continental Club for the 10:00 show of Alejandro Escovedo, a popular Austin performer who I’d seen the year before in an episode of the PBS show, Austin City Limits. We’d planned to arrive a little early and enjoy a round or two of drinks before the start of the show, but upon arriving (again, parking was easy to find) we were informed that the doors would be closing in less than thirty minutes to clear the room. 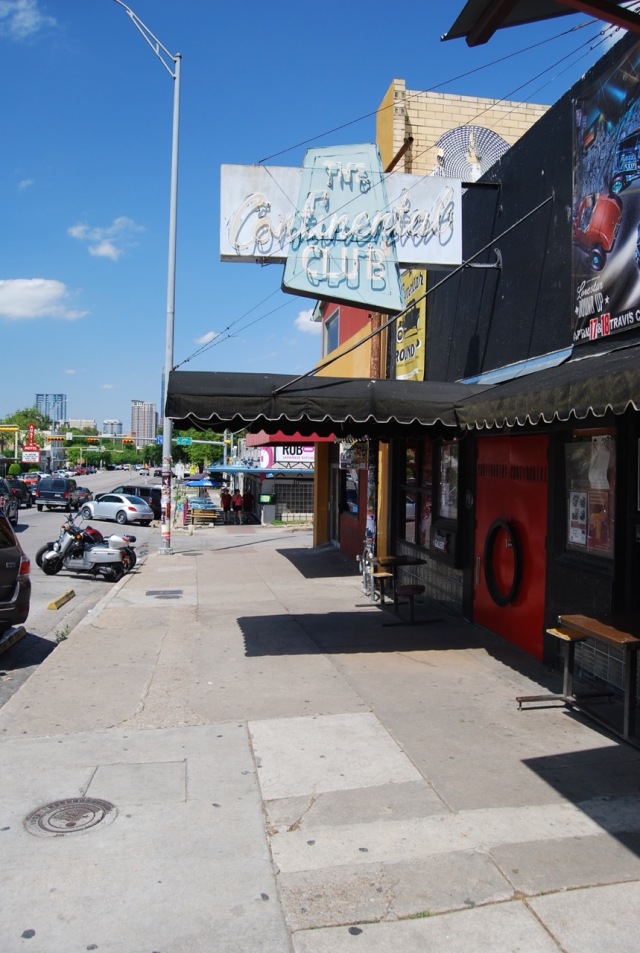 The Continental Club in SoCo

We were reluctant to pay the $5 cover charge for that short duration and then discovered that Escovedo wouldn’t be going on stage until 10:30, giving us a very long wait. We regrouped and after discussing our options decided to head back uptown to Sixth Street to check out one of the many music-based bars that line that avenue. After parking the car back on Fifth Street near the corner of Red River we walked up to Sixth and then a number of blocks, passing bar after bar, each with some type of music pouring out the front doors, many with a Tijuana Style barker out front touting drink specials.

After a few blocks we found a place with a basic blues band and went inside for what would be a set or two and as many rounds of drinks. I honestly can’t remember the name of the place; it could have been the Chuggin’ Monkey, Blind Pig, Maggie Mae’s or Thirsty Nickel. One was pretty much interchangeable for the next and it did make me wonder how they could all stay in business, there were that many providing the same concept, free music and booze.

We bade Roberta and Mark farewell as we walked back to the cars and thanked them for showing us Austin in a much better way than if we had gone it alone. Knowing that we’d be out late we’d boarded the Dinky Dog at a local PetSmart PetsHotel, a convenient service for travelers. It was a nice break for us not having to worry about leaving the little dog alone in camp.

The next day would be full as well, with a longer bike ride in the morning as we tried and failed to get up to the lake but did end up in a nice neighborhood with many new homes under construction, replacing older dwellings, just off South Congress. We returned to camp, showered and then drove back on the route we’d taken with the bikes, turning on to South Congress and driving back towards the center of town until we found a parking spot right in front of the Continental Club.

The Continental Club Front – Highlander on the left

This is a vibrant area full of funky shops, bars, restaurants and many food trucks. A little hungry after our bike ride, we walked across the street to a crowded coffee bar with outdoor seating, Jo’s. We ordered a Chicken Wrap (Sliced chicken, bacon, swiss cheese, lettuce, tomato on a whole wheat wrap) and a large Belgian Bomber (hyper-caffeinated mocha-infused iced coffee beverage). The Bomber is a less sweet version of Jo’s well-known Iced Turbo which is made with whole milk, half and half, sweetened condensed milk, coffee, espresso, chocolate and hazelnut. We sat at an outdoor counter and ate the wrap, quite good for what it was and just enjoyed being part of the scene.

Walking across the street and down multiple blocks, we checked out the shops. Our first stop was for a cupcake at Hey Cupcake, a shop devoted to those treats in a great looking Airstream Trailer. We ordered the Coco Loco (Coconut Cake and Coconut Buttercream frosting) and fell on it like a pack of ravenous wolves. 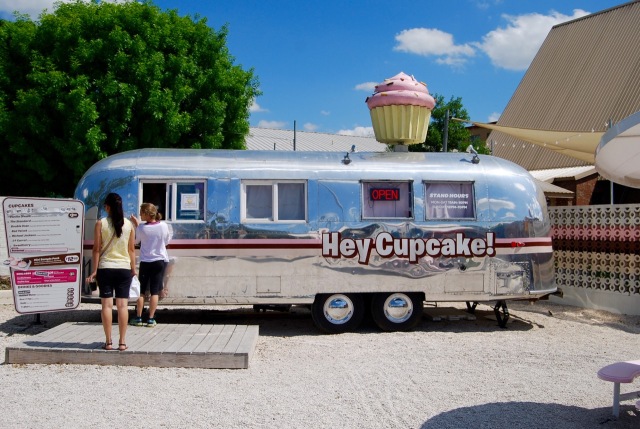 We walked a block or two more, crossed the street and spent a bit of time in a few of the second hand shops there, like Off the Wall, Uncommon Objects, and New Bohemia. We took a brief turn through Allen’s Boots as Joanna is looking for a pair of boots to wear for her horse rescue volunteer work, but came out empty handed

We finished back at Jo’s and admired a nicely done 1959 Chevrolet Station Wagon, then crossed back over for a final bit of food, a shared sundae at Amy’s Ice Creams. It was a delight, heavy on milk fat and just the way to finish up our afternoon of sightseeing. On the way back to camp we stopped to pick up the Dinky Dog and then at a Wal-Mart to get some food to prepare for dinner, a small jar of pasta sauce, some veggies to put in it and pasta to put it on, something light enough to compensate for the treats we spent the afternoon enjoying.

There would be one more day in Austin to go, as we had decided to stay the extra night and shorten up the trip by skipping Memphis and Nashville (that will just have to be another trip) to get back to Charlotte so that Joanna could begin the preparations necessary to help her Mom move there from Los Angeles. We looked forward to our last day and will cover it in the next post. 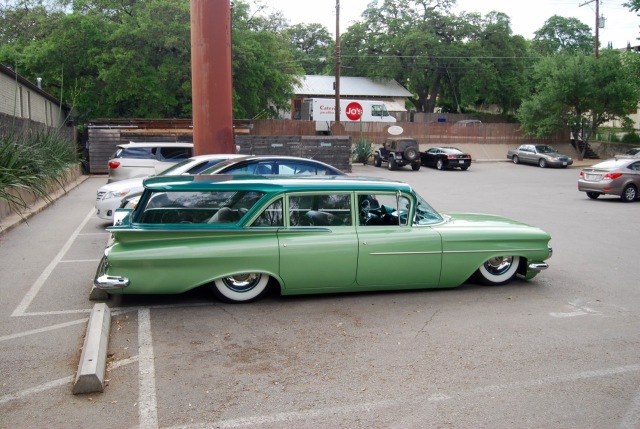