The heavy rain overnight and sketchy forecast for Friday put a damper on any bike ride we may have contemplated; instead we made plans to duplicate the day before by driving as far south as we could. As we started to drive we stopped across the road from the campground at the Oregon Inlet Fishing Center which bills itself as “home of the largest and most modern charter boat fishing fleet on the eastern seaboard” to pick up some ice. It was pretty busy that morning as boats were pulling in and out with some folks returning early with their catches, in a couple of cases large trash cans full of fish.

Not one of the fish we saw that morning.

One difference for us between traveling in the United States and abroad is the availability of ice here which means we can bring a cooler along, keeping food cold and enabling us to buy perishables that will keep for longer than one day. We own a multitude of ice chests, but our go to for travel now is a 36-quart steel belted Coleman that could easily be twenty years old. I’ve got an even older 54-quart version as well, but find we don’t need one that large for the type of traveling we do, particularly now that it is just Joanna and I. Both of these replaced an original metal clad that we inherited from my parents that would be fifty years old if we still owned it. 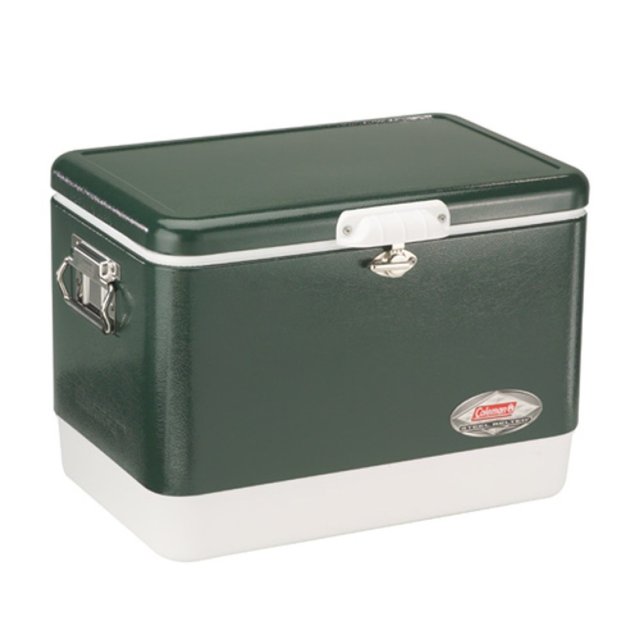 The problem with ice chests and traveling today is the complete absence of access to block ice. Back in the day you could buy it in ten to twenty-five pound increments; the larger size would keep your food cold for five days or so. Today we have to rely on ten-pound bags of cubed ice, which might last a bit over a day, meaning that you have to replenish each day. We also will fill an empty gallon milk jug and freeze it to use for the first few days of a trip (over for a weekend campout).

We were pleasantly surprised to find block ice at the Oregon Inlet Fishing Center. I bought a ten-pound block and it lasted almost four days, supplemented towards the end by a bag of ice; oh for the days of yore when the ice machines kicked out the big blocks. Newer models of the steel belted claim to hold ice for four days; I may have to put a 36-quart model on my birthday list.

We took off down Highway 12 and immediately drove onto the Bonner Bridge, which spans Oregon Inlet and has been at the heart of a dispute for many years. On June 15th though, the NC state Department of Transportation reached an agreement with the Southern Environmental Law Center to build a new bridge parallel to the current one. Originally built in 1963 with an anticipated lifespan of 30 years the old span has been buffeted by salty winds and eroding tides, tens of millions of dollars have been spent to keep it open.

As soon as you finish crossing you enter Pea Island and the National Wildlife Reserve located there. Under the terms of the agreement reached to replace Bonner Bridge, this section of highway, which tends to wash out during storms will likely be moved as part of the bridge project into the Pamlico Sound.  We continued driving south crossing a small inlet by bridge onto Hatteras Island. As we entered the community of Rodanthe we glimpsed kites in the sound and drove through an exclusive community trying to get a view of the activity. Beach access here is limited and when we finally got a good look, we could see that it was kite surfers enjoying the strong breezes that blow over those waters. 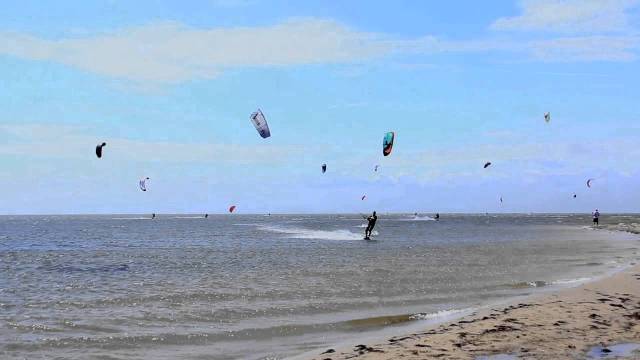 We continued south through the small towns of Rodanthe, Salvo, and Avon, finally arriving at the southern tip of the island in Hatteras, lining up at the ferry station for the trip over to Ocracoke Island. The ferries run every thirty minutes or so and thus the wait wasn’t too long; we soon were motioned forward and drove onto the boat, which left the dock and began its way on a twelve mile or so journey that would take just about an hour.

The Ferry to Ocracoke

In our day-to-day world of hustle and bustle, riding on the ferry is a joy. You exit your car and walk the length of the boat, climb to the upper deck to watch the neighboring shoreline slide past, feel the ocean breeze in your face. On larger ferries, food and drink might be available; in our case we could just pull from the action packers and cooler.

Small Islands from the ferry

We disembarked at the Ocracoke Ferry Terminal and drove about five miles south on the island to stop and visit the Banker Horses in their pens managed and maintained by the National Park Service. Legend has it that they were left here by shipwrecked explorers in the 16th or 17th century. They served the residents of the island as beasts of burden at work and play, in beach rides and races; in the late 1950s, the Ocracoke Boy Scouts cared for the horses and had the only mounted troop in the nation. The horses were permanently penned in 1959 to prevent grazing and the National Park Service has cared for the remaining herd since the early 1960s.

The Wild Horses of Ocracoke

We’d arrived in time for one of the two daily ranger talks and when it ended made the short drive down to the town of Ocracoke to inquire about taking one of the two ferries that sail to Cedar Island and Swan Quarter on the mainland. We’d be driving to Charleston in a couple of days and thought it might be possible to take the ferry to Cedar Island, then drive along the coast to Wilmington and beyond. If we hit the ferry time schedules right, the elapsed time would be about the same as driving the inland route (I-95 south) and we’d get to enjoy two ferry rides. 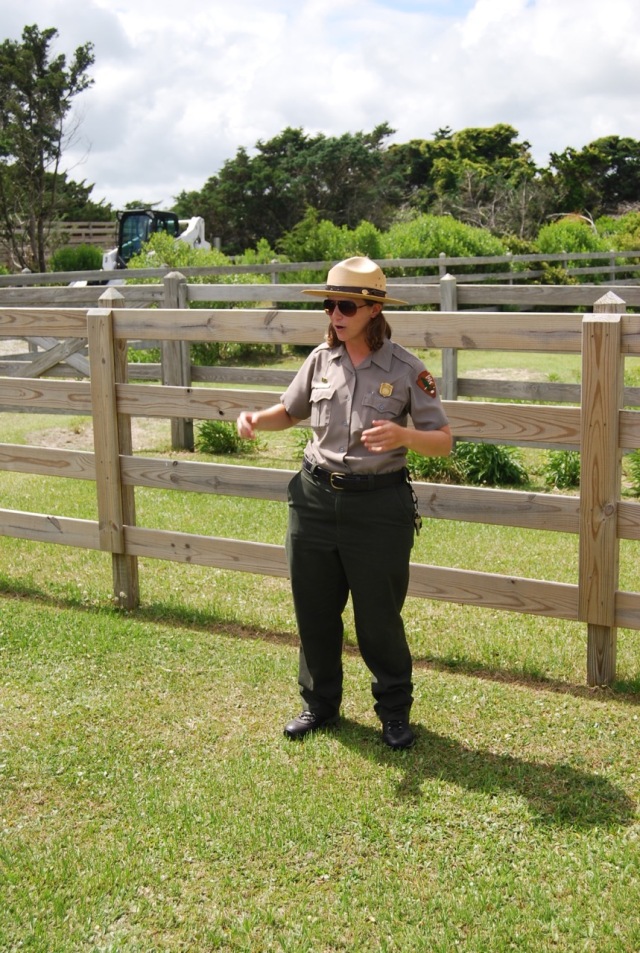 We parked at the ferry terminal and I went inside to inquire about routes, fares and time schedules. While waiting in line I overheard two women speaking and the accent was unique. Ocracoke Island historically had its own distinct dialect of English, often referred to as a brogue. A characteristic phrase is “high tide,” pronounced somewhat like “hoi toid”; due to the influx of tourists and greater contact with the mainland in recent years; however, the Ocracoke brogue has been increasingly influenced by outside dialects. I’d just had my first brush with the brogue.

It turns out the route we’d envisioned is feasible and there were four ferries to Cedar Island the Monday we planned to drive, with two in the morning at 7 and 10 am. The latter was sold out due to a weekend long festival and so I reserved a spot on the early trip. It was starting to get late in the day and we retraced our steps back to camp, stopping in Hatteras for a quick bite at a Subway, eating in the car so we could each drink a cold beer from the cooler.

We’d enjoyed another long day of sightseeing and in two days had covered the bulk of what comprises the islands of the Outer Banks. The weather forecast for the immediate future was inviting; the rain that had dogged us would clear and we’d have blue skies and warm temperatures. Time to take a bike ride.