Refreshed from our mid tour beverage break, we walked back to the corner of Broad and Meeting to start tour number two. The afternoon was moving along and fortunately for us, many of the places listed on the second tour had also been on the first, enabling us to significantly shorten the experience.

This intersection is known as the Four Corners of Law because the buildings on each corner represent religious, local, state and federal law. Starting with the City Hall, said to be the oldest in the country, you move to the Charleston County Courthouse, then the U.S. Post Office and Federal Court and finally to St. Michael’s Episcopal Church. Built in the 1750’s and now the oldest surviving religious structure in Charleston, during the Revolutionary War its 186 foot tall steeple was painted black in an attempt to mask it from British ship gunners; instead it made it an easier target. 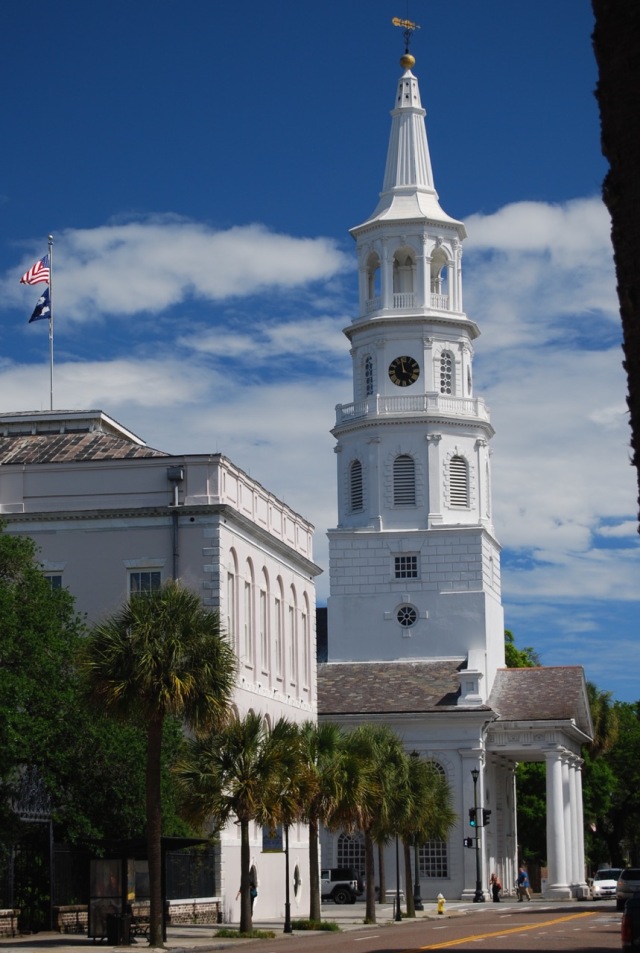 In front of the church and the Post Office it is common to see women weaving and selling sweetgrass baskets. An African craft, basket making has been practiced throughout the Low Country since the 18th century, the artists using indigenous materials to create their works of art. A dying art, a local woman asking us if we needed assistance as we paused encouraged us to consider that future generations might not practice this craft.

As we walked down Meeting Street, we stopped in front of the Poyas-Mordecai House at number 69. This is a good, albeit large, example of a single house – meaning that the house is a single room wide. Many Charleston houses were built in this style to make the most of breezes in the summer. By opening the front and back doors or windows, a breeze could pass through the house to cool it. The front door, also known as a privacy door, does not lead directly into the house, but instead into a porch (a piazza in Charleston) allowing residents to relax outside without being bothered by their neighbors.

Poyas-Mordecai House Garden and Porch in the Background

We turned onto Tradd Street, which runs the width of the city, and continued to Church, turning south to walk down to Water Street, named after Vanderhorst Creek, which once ran here. At the corner of Water and Church is the George Eveleigh House. When built in the 1700’s, the creek was present – the mooring posts in front of the house date from this time period. At Atlantic Street we turned left and followed it to the end at East Battery Street, climbing up the short set of stairs to walk along the elevated walkway that overlooks Charleston Harbor, with Fort Sumter in the near distance.

As it was quite warm and humid, those few moments walking alongside the bay were revitalizing, a cooling breeze lifting our spirits as well as trying to blow my hat away. We arrived at the end of East Battery where it runs into Murray, facing the Ashley River, crossing the street to navigate through White Point Garden, a lovely little park named for the large mound of oyster shells that covered the area in the city’s early days. 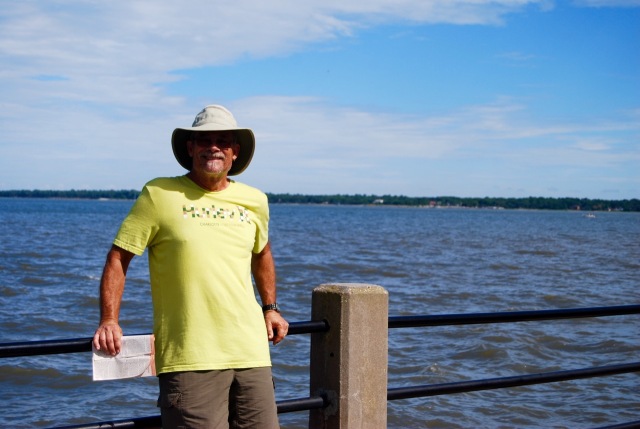 Sitting on the Dock of the Bay

Our energy level was flagging at this point as it was getting later in a warm muggy day full of walking, incenting us to work our way back to the car, skipping many of the houses noted during the last half of the tour. This included, among many others, the Calhoun Mansion, a 24,000 square foot edifice, the largest building in the city constructed as a single-family residence with 35 rooms (each with a fireplace) and a ballroom with a skylight. We’ll check in out the next time we’re in town. Our diminished energy was also attributable to not having eaten since our breakfast Panini; on the run I called up Hominy Grill, one of Carolyn’s recommendations, and arranged for a reservation about an hour from that time. 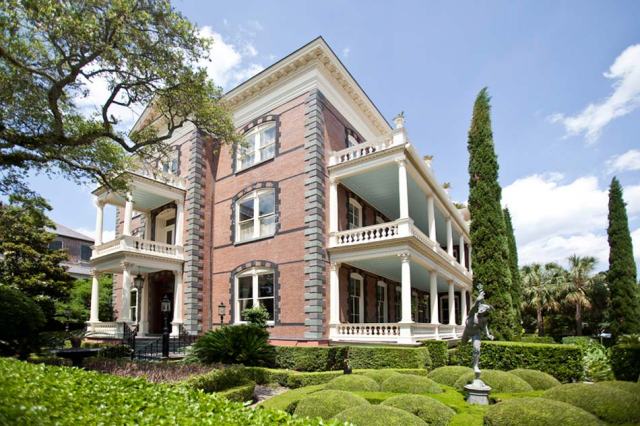 With the clock ticking, we thought we’d jump on one of the trolley’s to cover the couple of miles back to the car, but after the posted time for its arrival had passed by 10-15 minutes, we gave up and just walked the final distance, giving us a surprising ten miles in total for the day when I checked a walking app (Pacer) on my phone. No wonder we were hungry.

Once back at the car we grabbed a couple of cold sodas from the ice chest and drove the mile or two it took to reach the restaurant. Seated quickly, we ordered a Blackberry Collins for Joanna and a Planters Punch for me and Okra and Shrimp Beignets with a salsa/cilantro-lime sour cream to start. We attacked the beignets when they arrived, tasting every bit as good as the selection sounds.   I’d ordered the Catfish Creole with Jasmine Rice and Fried Okra while Joanna settled on the four vegetable plate, her choices being Deep Fried Cheese Grits, Stewed Okra & Tomatoes, Pickled Cucumbers & Onions, and Mashed Sweet Potatoes served with a large portion of corn bread. 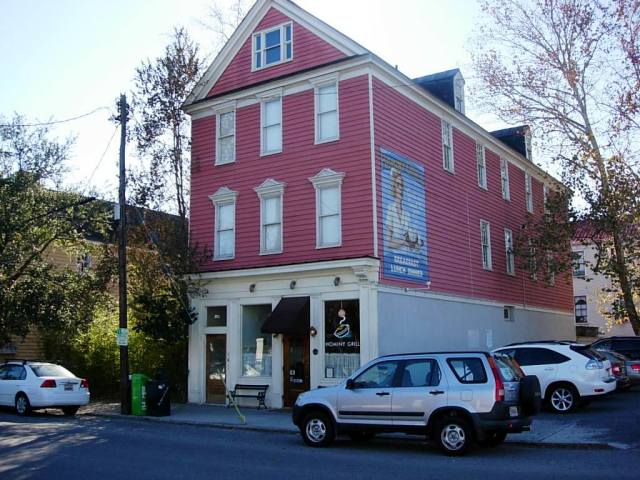 It was just the right amount of food for the two of us, sharing as we do, the fish succulent and moist, perfectly fried in a cornmeal batter, soaking up a sauce of sauce of tomato, peppers, onions, celery and ham. After a long day of walking, it all went down easily and yet was more than enough leaving no room for dessert. I’d enjoyed a Victory Prima Pils after finishing my drink and with all of that; our tab came to $73 (not including the tip), money well spent on a delightful meal and experience.

With a short drive the next day down to Fernandina Beach in Florida, we planned on stopping off at a plantation on the way, meaning we’d need to break camp in a timely fashion. Not wanting to go to bed to late or too liquored up, we opted not to return to the Barrel saving it as well for a return visit. Maybe this coming winter?