One of our goals for this year, in addition to taking a number of short (one and two week) trips was to spend more weekends camping and to do day trips during the week. One of the types of bike rides we try to seek out are on the groomed paths and trails that were once rail beds. We rely on the Rails to Trails website, word of mouth and various articles to alert us to good opportunities. The bike tour we took two years ago on the Great Allegheny Passage (GAP Trail) was organized by Rails to Trails and supported their efforts to lobby for the conversion of abandoned rail beds.

The Swamp Rabbit Trail is one such endeavor, located in and around Greenville, South Carolina. Its an easy two hour drive down the I-85 from our house. After scoping out information on the trail at the web site, we decided to aim for Cleveland Park in Greenville as it appeared to be a good place to park and landed us near the bottom of the trail, providing us with a good ride if we just went in one direction.

Located along the banks of the Reedy River and Richland Creek, the park is home to the Greenville Zoo as well as a host of other outdoor, picnicking, and other recreational opportunities. We parked the car immediately adjacent to the trail, unloaded the bikes and prepared for our day out. It was a warm sunny day and this means making sure water bottles are full and sunscreen has been applied. Not sure of what types of facilities we’d find along the way we each had an energy bar or two to provide fuel should the need arise.

The first section of the ride winds through the park itself and after a short distance, you climb up a steep incline in Falls Park on the Reedy to find yourself in downtown Greenville, not far from Fluor Field, home of the Greenville Drive minor league baseball team. From here the trail follows Reedy River for most of the ride and begins a gradual climb of about 700 feet to its eventual end in Travelers Rest, a small town approximately 15 miles from the start in Cleveland Park. 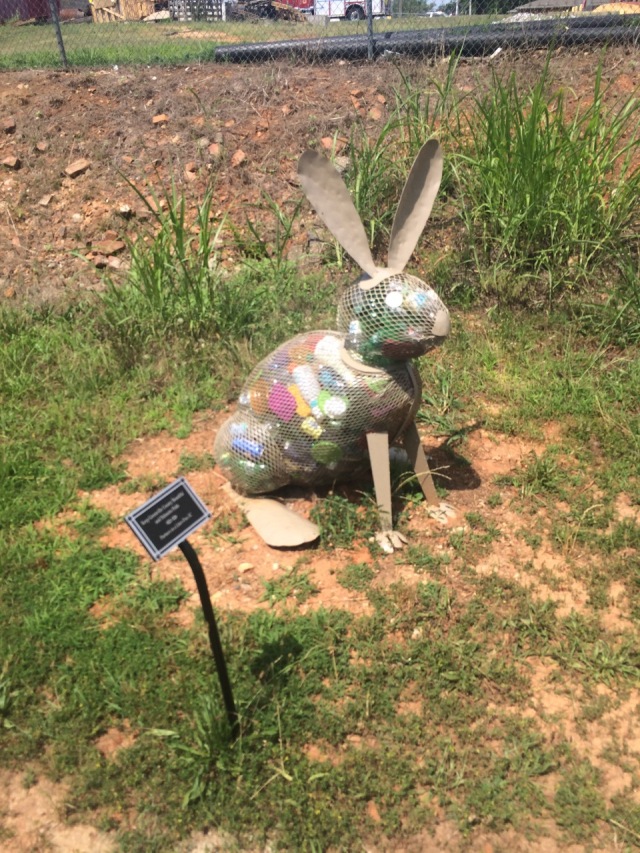 On the Greenville side of the trail south of Furman University there is a brief detour that takes you off the path. Fortunately signage is good and traffic is light so it’s not much of an inconvenience. A bit of a ways past the detour you approach Cedar Lane Rd. and ride by Swamp Rabbit Café and Grocery. Given its placement on the trail, we’d not be able to stop on this journey, but the next time we ride the trial we’ll be sure to schedule a spend a little time there.

Some distance later one enters the grounds of Furman University, passing by the vehicle maintenance yard, then Swan Lake on the right hand side and the campus golf course on the left. As mentioned earlier, there is a nearly imperceptible grade here, one that leads you wondering why this seemingly flat piece of path should seem like such a grind to traverse.

Rail to Trail conversions are often like this, smooth pathways whose grades are not very steep. Having been converted from their former use by trains, they feature a grade that rarely exceeds two percent, with most registering at about one percent to enable trains to use less energy, experience higher speeds and lessen wear on the equipment. Given their isolation from traffic, relatively smooth surface and nearly flat grades, these conversions, wherever they can be found, are great avenues for new and budding cyclists to gain some experience in this sport.

We continued riding until we entered Travelers Rest, found the end of the path on the north end of town and then turned around for the return leg back to the car. As is our practice (as followers of this blog will attest), we stopped for a mid-ride snack at one of a number of cute looking establishments available for such consumption. Cool Mamas Ice Cream shares a building with the Café at Williams Hardware and once inside we ordered a good sized cup of ice cream to split, enjoying it while sitting on a back patio that fronted the trail. 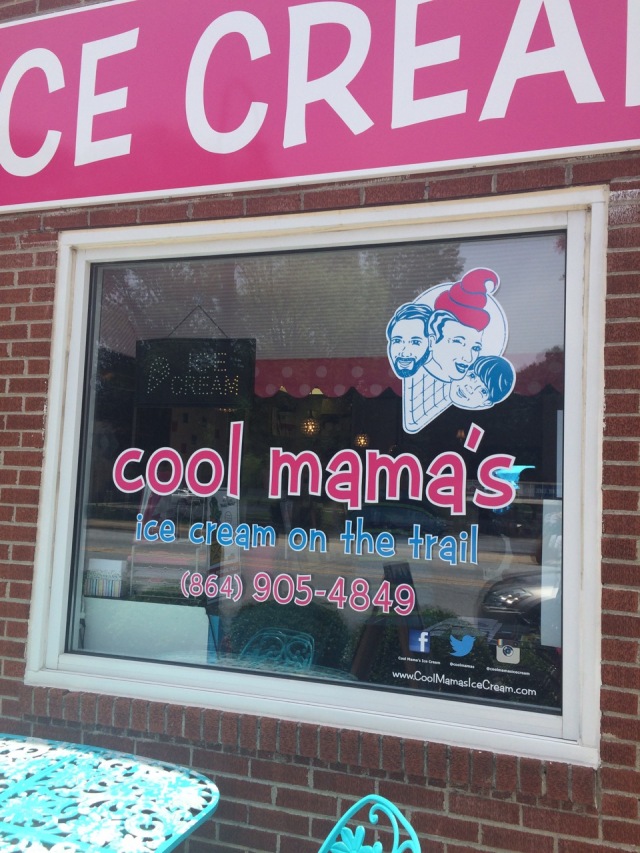 Refreshed we climbed back on the bikes and began our ride back, only to discover that the minor difficulty we’d experienced on the way out was a boon on the way back, able to gain a gear or more as we took advantage of the downhill grade. I’ve often found that with any journey that involves repeating the same route out and back the return portion always seems shorter, perhaps because of the familiarity. Such was the case with us, aided by the downhill grade we made good time back to the car, loaded the bikes, sucked down a big bottle of Poweraide, cleaned up with moist wipes and shielded by a large beach towel, changed out of our cycle clothes into street wear for a trip into Greenville central.

We left the park turning onto East Washington St. which led us ten blocks or so to South Main St., Greenville’s main drag. They’ve done a very nice job in this town of preserving the old downtown quarter, revitalizing sidewalks and the street scape to create an inviting walking experience, full of retail shops and restaurants. We parked a few blocks up the street, near its intersection with North St. and began our walk down the six blocks it takes to get to the Reedy River. 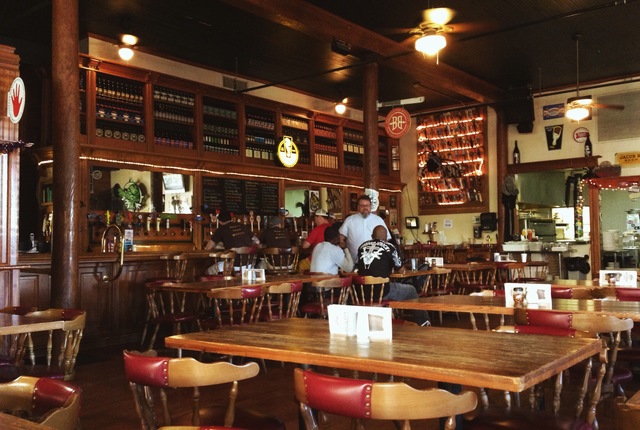 Before stopping for some food, we spent some time in Mast General Store, a North Carolina chain specializing in outdoor gear and clothing, noting some things for potential purchase, but holding off until we visited the Asheville location in early July during our planned visit with Jessica and Kris. Quite hungry and thirsty by this time, we went straight to Barley’s Tap Room, a favorite of ours here and in Asheville. Known for their excellent selection of craft beers, their food is good and hearty pub grub, just what we were craving. 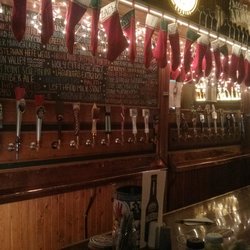 The Taps at the Tap Room

We decided to split a Spicy Chicken Focaccia, featuring a blackened chicken breast topped with jalapenos, pineapple, melted mozzarella cheese and chipotle aioli. It was pretty tasty and not overly spicy, just enough to justify the second pint of beer I ordered. We finished up and walked back to the car, comfortably full and content after a new adventure accomplished. The drive back home went smoothly as we discussed a number of other similar day trips we could take as the summer progressed. We had much to look forward to.