Cleaned up, we piled into the cars and drove out to the Visitor’s Center for a bit of boating action. Sarah and Hans had brought one of their Kayaks to paddle with the intent to rent another to accompany it while we would make do with a pedal boat. Upon arrival we discovered that a kayak was not allowed in the inlet and so leaving it on the car, we rented the requisite number of sea going craft and spent an idyllic hour or so paddling and pedaling adjacent to the Center.

By now we’d all worked up an appetite so we made our way into Troutman for some lunch, our destination a BBQ joint that had opened up since our last visit a couple of years back, Randy’s BBQ. We parked around back in a lot across the street and walked in. The place was hopping, a big Saturday afternoon crowd getting fed with good food, as we would soon find out. Wait staff was friendly and efficient and after Joanna and I ordered a Pita Grilled Chicken Sandwich (with lettuce, tomato and mayonnaise) to split along with a Cherry Lemon Sundrop Slush, we were all informed that since we were first time guests, we’d all enjoy an order of banana pudding on the house. The food was tasty and filling, good to know as we’ll return to Lake Norman again in the future and having this restaurant close by will add to its attractiveness as a camping spot. 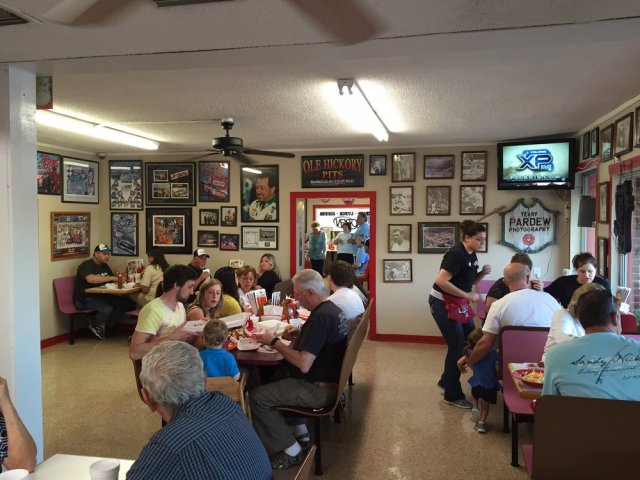 Back at camp we spent the afternoon relaxing, each in our own fashion, Hans and I hanging out and reading, the girls over at the swimming beach. The rest of the day melted away; there can be no more peaceful place than sitting in a chair in a campground in a forest, the only intrusions the sounds of nature echoing around you. The girls returned from the beach and as afternoon melded into evening we began preparations for that night’s dinner, Sloppy Joes from Sarah and Hans, Broccoli Salad from us and the piece de resistance, S’mores with milk (Hershey’s) and dark (Dove) chocolate options.

One of the joys of the weekend for Joanna and I was getting the opportunity to spend a bunch of time with a couple of kids. Reagan and Quinn are intelligent, quick-witted and energetic youngsters whose lively conversation, questions, and antics kept us on our toes during our time together. It was a delight watching them approach their marshmallow toasting duties, each falling into a different camp, the slow golden roaster and the blazing flame-out. In the end multiple marshmallows were sandwiched between graham cracker and chocolate, gooey and sweet, guaranteeing a sugar buzz like no other. 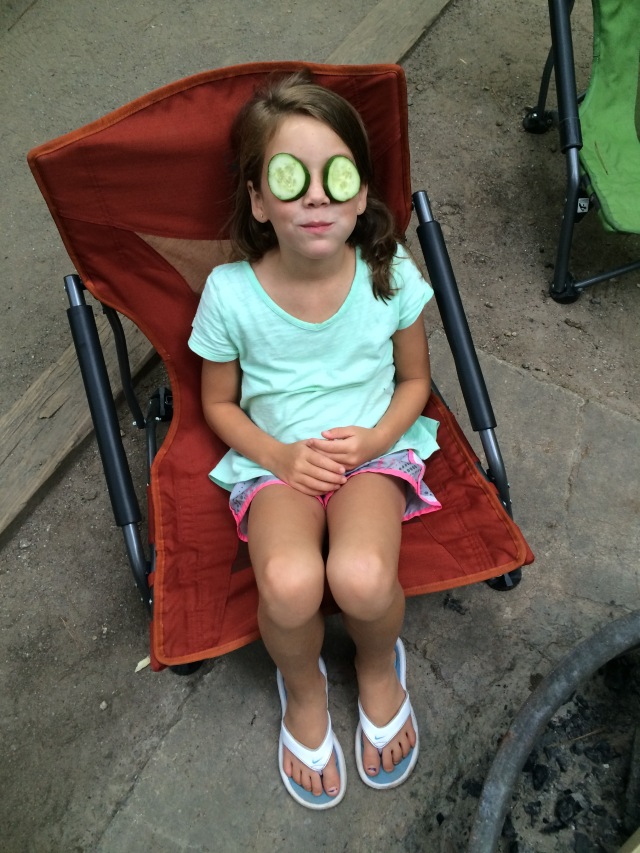 Breakfast the next day was on us and we opted for instant Oatmeal, a quick and easy breakfast while breaking camp. Sarah and Hans had provided Breakfast Burritos the day before, which Hans and I held off eating until our return from the bike adventure. With breakfast done and the cars packed, we made our way back to the Visitor Center for a three-mile hike on the Hawk Loop of the Itusi Trail. At three miles it was just the right distance for the kids and could be accomplished in a bit over an hour of brisk walking. 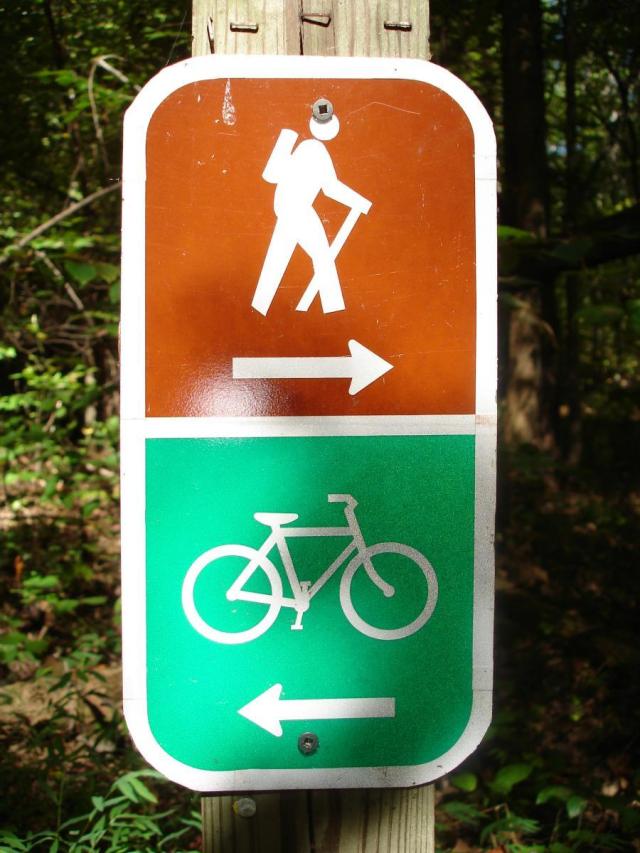 Hikers go in one direction, bikers in the other

Hans, Reagan and I split off from Sarah, Quinn, and Joanna as Reagan set a blistering pace, one I had to hustle to keep up with. She and Hans engaged in much question and answer along the way and I found it interesting to witness their interaction, the relationship a parent has with their child endlessly varied and fascinating to watch and contemplate.

We finished up the hike and made the decision to venture to Mooresville for a bite to eat, arriving shortly thereafter in the historic downtown section of the city. Famous for its restored murals, it’s a picturesque slice of Americana, the type of setting that once lost is impossible to recapture. 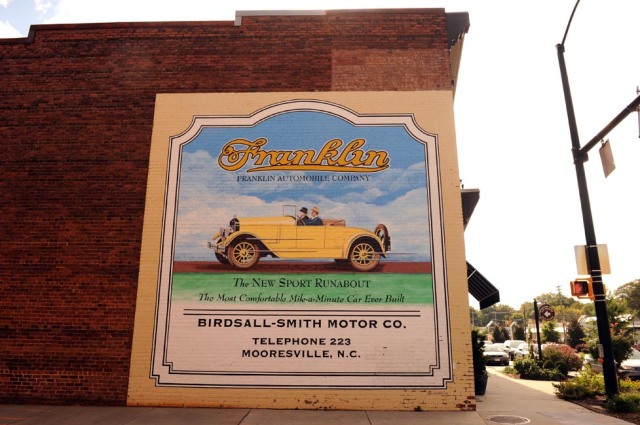 This is a mural in downtown Mooresville

We decided to drop in at the The Daily Grind for our meal; here is my review at Trip Advisor:

Six of us stopped in early on a Sunday afternoon after a weekend of camping at Lake Norman State Park. We’d finished a three-mile hike and were definitely in the mood for a satisfying late breakfast or lunch. Service would be variable throughout our meal, the first sign being it took quite a while for a waitress to recognize our presence and bring us menus. We ordered a variety of items, ranging from sandwiches to breakfast, with my choice being the corned beef hash and eggs. When our order arrived my plate didn’t contain any hash and after waiting a bit of time to see if it would come separately, I realized it wasn’t coming and so had to wait for the waitress to return to mention it. She seemed surprised to hear that I had ordered it and so I waited, and waited for it to eventually come to the table. By the time it arrived I had plowed through half or more of my plate and in the end was a bit disappointed in the quality of the hash itself, as it tasted like something from a can. Overall most folks enjoyed what they had ordered and so I might return again if I was in the area, but I won’t go out of my way to eat there again. 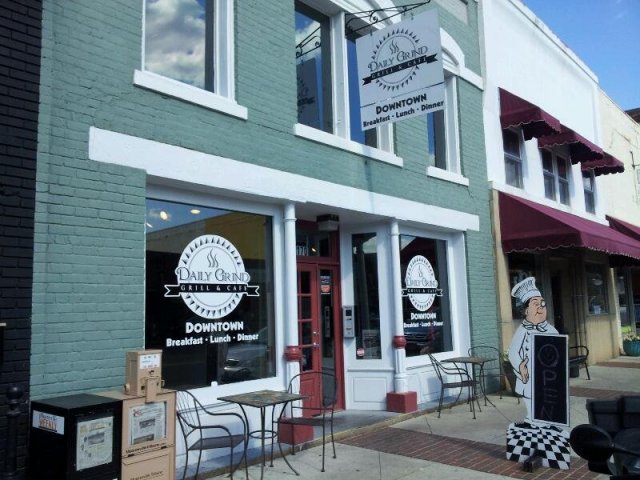 We left the restaurant and walked around the downtown area, doing some window shopping and then venturing one block off the main drag to arrive at Mooresville Ice Cream Company, home since 1924 of Front Porch Ice Cream. We’ve enjoyed this product which is available by the pint at our local supermarket, finding their fresh fruit flavors to be the best. Joanna and I split a cone of Charleston Sea Salt Caramel, a nice combination of salty sweet, the ice cream itself not as high in butter fat as we like but still a nice finish to a fine weekend of camping with good folks, plenty of exercise and satisfying food, and an unexpected tumble or two. 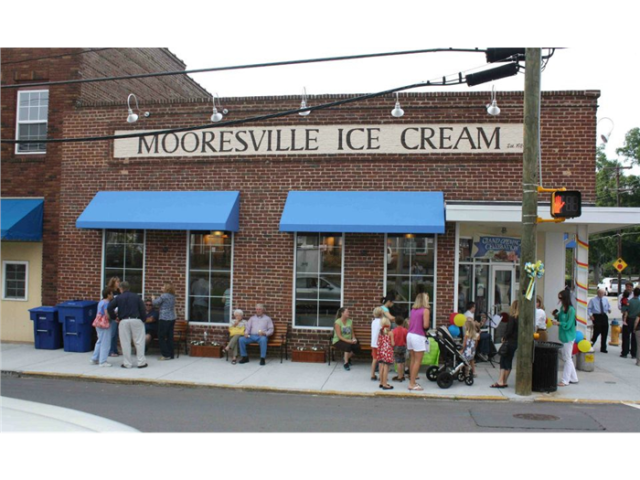