Followers of this blog will recognize our destination for Saturday evening, Speisekammer Restaurant, as being one of our favorite places to eat in the Bay Area. This would be our fourth or fifth visit, having lost track, and we looked forward to a wide selection of German draft beer, authentic food, spending time with Lydia and Walter and as a topper, listening to Gypsy Jazz courtesy of The Hot Club.

We arrived first and were seated at the same table we’d occupied during our last visit, in the front dining room next to the bar and one table away from the stage. I ordered the German beer that brings some of my best memories back to me, a Bitburger. In 1977 Evan, Rendy and I spent a memorable week at Spangdhalem Air Force base, living in the barracks with a crew of Air Force jet mechanics, two of whom I’d met earlier in the trip in Calais, France as I was hitchhiking to London. Bitburg is the closest town to the base and as a result, Bitburger was the beer we drank. Still one of my favorites, if it is on draft somewhere I’m sure to order it.

That First Glass of Bitburger, But Not the Last

To tide us over until Lydia and Walter arrived we ordered one round of the Grilled petit Nürnberger Sausages (Kleine Nurnberger Bratwurstchen) served over haus-made Sauerkraut and (Reibekuchen) four crispy Potato Pancakes served w/ haus-made Apple Compote. The sausage too brings back memories of our numerous visits to Nuremburg and is small enough in size that eating, one or two or a whole bunch doesn’t seem particularly excessive.

More beer was ordered with the arrival of Lydia and Walter and with some time to spare before the start of the music, we fell into serious eating. Our group ordered many of the items on the menu, too much cover here so for Joanna and I, it was the Smoked Trout (Geraucherte Forelle) with Horseradish Sauce, Radish & Red Onion on a Bed of Mixed Greens and Veal Jagerschnitzel with Spätzle & Mushroom Sauce, respectively.

German cuisine is typically not very subtle; it is comfort food to the nth degree. The nice thing about Speisekammer is their offering of a small size option for each entrée, which I take advantage of each time we visit. We continued to order (more of those sausages and potato pancakes) and finished up just as the Hot Club began their set. This is intricate but accessible music, cadenced in a compelling fashion, a form of percussive rhythm similar to some bluegrass styles, giving it a fast swinging feeling.

We departed the restaurant agreeing to reconvene at Lydia and Walter’s two night’s later on Monday to watch the first game of the NBA playoffs featuring the Golden State Warriors and Oklahoma Thunder. We were pleasantly full and mildly intoxicated and the percussive rhythm and off beat chords (major 7th, 6th, and 6/9 chords followed us all the way back to the apartment and a very good night’s sleep.

Sunday we reprised an activity we’d enjoyed in a previous visit, an afternoon visit to Golden Gate Fields in Berkeley for Dollar Day, with one dollar parking, admission, beer and hot dogs. As with our last trip here, it was a beautiful day, with blue skies and mild temperatures, perfect for sitting outside and watching the ponies run.

Coming Down the Stretch

Monday morning Jessica took off some time from work to take care of her car registration at the DMV office on Claremont Avenue in North Oakland. While inside for her appointment, Joanna and I walked a few blocks down to Telegraph Avenue into the neighborhood known as Temescal. This is a vibrant area full of shops, restaurants, and other business, the kind of urban environment that makes living in a city like this so convenient.

The donut shop we went in search of, Doughnut Dolly, was closed and so we stopped in at a popular place, Pizzaiola for a couple of coffees, scone, and muffin to go, returning to the DMV office just in time to meet Jessica coming out, providing her with much needed calories to fuel her commute to work. We drove back to the apartment and parted ways, with Joanna and I venturing across the bay to San Francisco to tour the Mission San Francisco de Asís, more commonly known as Mission Dolores.

Founded in 1776 it is the oldest surviving building in the city, having made it through the earthquake of 1906 intact. Still an active church, it hosts mass and other services in the mission chapel and in the larger basilica (destroyed in the earthquake and rebuilt in 1918) next to it.

A unique feature of having grown up in California is our attachment to the mission system, which stretches from San Diego north along the coast to Sonoma. A series of 21 religious outposts, they were established by Catholic priests of the Franciscan order between 1769 and 1833. The route that links them is known as El Camino Real (Spanish for The Royal Highway). Between the Los Angeles area and the San Francisco Bay Area significant portions of US 101 follow the Camino. Highway 101 is one of the last remaining and longest U.S. Routes still active in the state, the longest highway of any kind in California and one of the original national routes established in 1926. We enjoyed the self-guided tour, finishing up in the Mission’s cemetery, the final resting place of Don Luis Antonio Arguello, the first governor of Alta California under Mexican rule, and Don Francisco de Haro the first alcalde (mayor) of San Francisco. 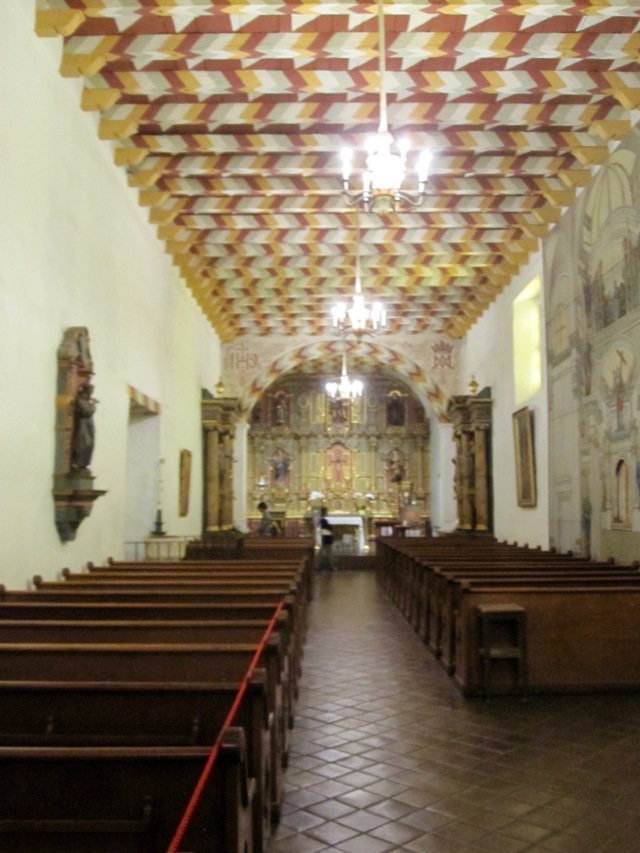 Chapel of the Mission

Finished with the Mission and with a bit of time on our hands, we rode BART back across the bay to Berkeley and walked up University to stop in at a favorite bike shop, Mikes. We got Jessica’s bike here and try to visit when we can as they have a large assortment of accessories and clothing.

We killed a bit more time grabbing a cup of coffee at the McDonald’s at University and Shattuck, and then used Uber to taxi up to Lydia and Walter’s house. A number of their neighbors and friends stopped by as well with Jessica and Kris joining us after work; lots of good food was consumed, alcohol imbibed while we watched the Warriors lose the first game of a series they would eventually win.

Tuesday brought our normal routine for going home, making the walk up to the BART station, enduring a very crowded train until we crossed the bay and hit the first couple of stops in the City, the cars emptying out and providing us with seats for the remaining thirty minute ride to the airport. Inside the terminal, we picked up a large loaf of Boudin Sourdough Bread to take home with us and split a sandwich and coffee from one of the food concessionaires. Another trip to the West Coast was drawing to an end, as successful as the many we’ve taken in the eight years we’ve lived in Charlotte. And I’m sure there will be many more like it to come. 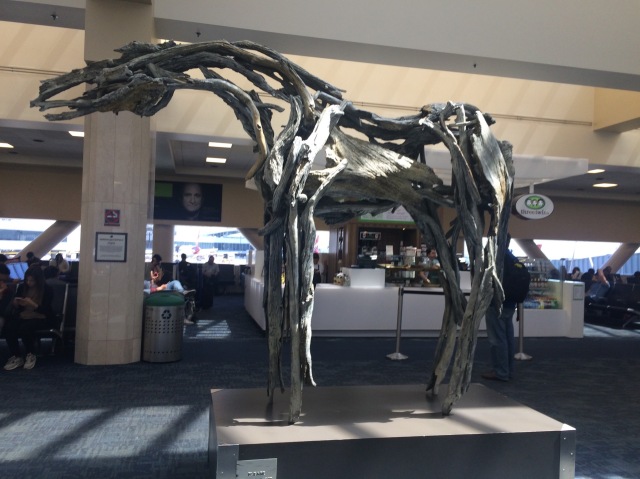