With an approximate seven-hour drive ahead of us we didn’t feel the need to hustle on the way, so took the time that morning to work on the blog, catch up on internet related tasks and put some time in at the workout room of the motel.

On the road we continued east and a few hours in, knowing we were a bit ahead of schedule, pulled off the highway in the town of Mitchell to pay homage to a recommendation from Heir Angst, the famous (or not so famous) Corn Palace.  Built in the late 1800’s, it is a multi-purpose arena/facility decorated with crop art; the murals and designs covering the building are made from corn and other grains, and a new design is constructed each year.

We walked through the building, read the displays (a picture of each design for each year) and then stopped at a nearby food booth (there was some kind of street carnival going on, complete with thrill rides and many souvenir and food stands).  Our choice to split was a sandwich this area is known for, a pork tenderloin.  Served like a pulled pork sandwich in the Carolinas, it’s just a piece of meat on a white bun with no dressing or condiments.  Plain in concept but allowing the richness of the meat itself be the centerpiece.

Back on the highway we motored towards Badlands National Park and our campsite at Cedar Pass, conveniently nearby the lodge and Visitor Center.  The sites here are flat and naked, with a metal and wood shelter covering the table for shade, the stark landscape and jutting cliffs providing all of the scenery one needs. 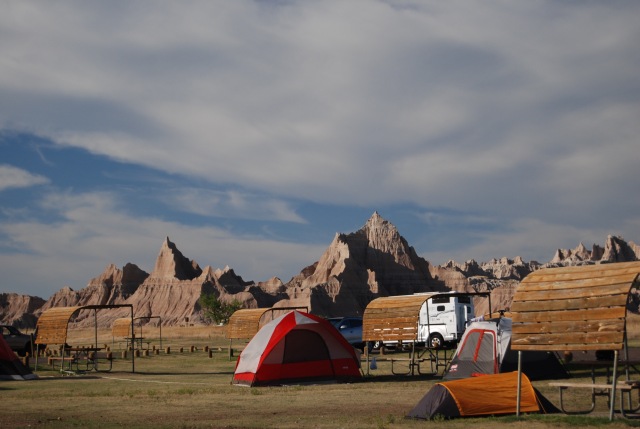 Not Much Cover in Camp

As we’d reconnoitered the area, we discovered that the ranger program that night would include a free concert beforehand featuring a well-known contemporary Native American New Age/Worldbeat music group based in South Dakota, Brule.  We produced a quick camp dinner, experimenting with a can of Spam, cut into small chunks and fried a bit, then mixed in with a box of Kraft Mac and Cheese.  I’d not had Spam since I was a kid and after working through a bowl of our combo, came to understand why I’d gone so long without it.  Basically edible, but not the gustatory delight I’d hoped for.  The Mac and Cheese though was good.  We’ll just have to experiment with some other protein mix-ins in the future to see if we can come with yet another camp food standard.

We cleaned up after dinner and walked over to the amphitheater with our chairs and a large cup apiece of a suitable adult beverage.  The setting here is amazing, the amphitheater stage area and screen facing east, ringed by steep cliffs that can be used as additional seating.  As the sun was slowly setting in the west, it lit up the cliff side throwing it into sharp relief.

Cliffside Crowds on the Left 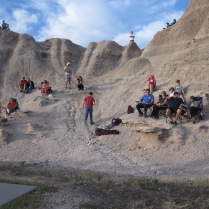 Cliffside Crowds in the Center 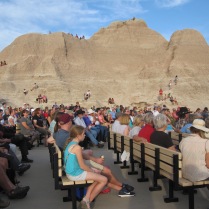 Cliffside Crowds on the Right

The band had already started and we came in mid-set to sparkling yet hauntingly lovely music, enhanced by the presence of a troop of native American dancers who performed during about half of the rest of the program. 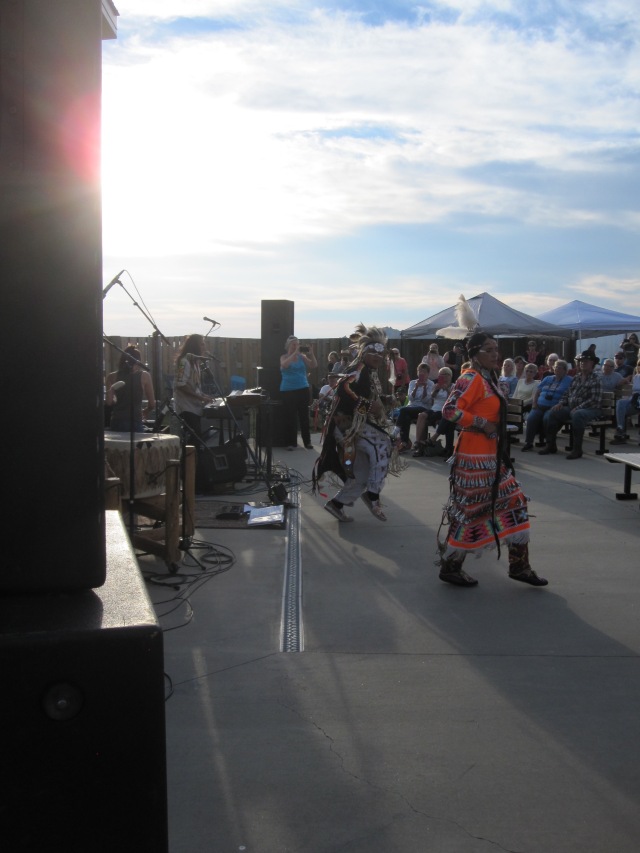 The leader of the band, Paul LaRoche filled the time in between songs with a narrative that spoke to the connection we all share with nature and the spirit world.  The surroundings, the time of day, and the beauty of the music and dancing made for a special moment, one we had stumbled into, as sometimes happens when traveling.

We finished the evening with a ranger program about the geology of the park, formed over the millennia through two basic geologic processes: deposition and erosion.  Created in layers, diverse environments—sea, tropical land, and open woodland with meandering rivers—caused different sediments to accumulate here at different times in the process known as deposition.  Then erosion began about 500,000 years ago when the Cheyenne River captured streams and rivers flowing from the Black Hills into the Badlands region.  Modern rivers cut down through the rock layers, carving fantastic shapes into what had once been a flat floodplain, eroding at the rapid rate of about one inch per year. Evidence suggests that they will erode completely away in another 500,000 years, giving them a life span of just one million years. Not a long period of time from a geologic perspective.

This information would be repeated throughout our stay, such that after a while you didn’t need to read the displays as they conveyed the same material you’d witnessed earlier.  Up early the next day we ate breakfast and drove out towards the entrance to the park to join a docent for a guided geology tour at 8:30.  It was a beautiful morning, blue skies highlighting the cliff sides and geologic formations, as we walked a short distance after the tour out into the park, scrambling over smooth rock and ledges.

Finished, we drove back out to the interstate to stop in at the Minuteman Missile National Historic Site to see if we could book a tour of the Launch Control Center.  The first one available was at 1pm, so we took our tickets and with a couple of hours to kill we drove 23 miles up I-90 to the small town of Wall, famous for Wall Drug Store.  Purchased by Ted Hustead in 1931 it was at the time located in a 231-person town in what he referred to as “the middle of nowhere.”  Business was very slow until his wife Dorothy thought of advertising free ice water to parched travelers heading to the newly opened Mount Rushmore monument 60 miles to the west. From that time on business was brisk and the store has grown into a unique shopping mall consisting of a drug store, gift shop, restaurants and various other stores that take in more than $10 million a year and draws some two million annual visitors.

We stopped in at the cafeteria to split a ham salad sandwich and splurged on two cups of coffee as they were just five cents apiece.  I’d not had ham salad in ages; my Mom used to buy an Oscar Meyer version in a tube and tasting that sandwich brought back fond memories.  We’d later find a pint container of it at a Walmart in Spearfish and enjoyed those subsequent sandwiches for a week or more.

At the appointed time we drove back east on I-90 to the off-ramp for the Launch Control Center, parked and entered the compound for our tour.  The ranger had a very dry sense of humor which enlivened our visit, viewing a facility that spoke to a period when we all lived under the threat of (well, technically I guess we still do) nuclear annihilation.  Like going through a mothballed battleship, everything here was left as it was when it was decommissioned, allowing for a glimpse of the on duty life of the air force personnel who manned the station.

Once done with that tour we hopped back in the car and drove back west an off-ramp or two to stop at an actual missile site.  Also decommissioned, the self-guided tour commentary via cell phone was informative as you could view down the partially opened silo with missile intact.  We walked around the site, viewed the silo from all angles and then left, driving back up to Wall to take the two lane road back into the northern side of Badlands.

Missile in the Silo

Partway into the park the road turns to gravel as you pass through rolling plains populated with bison, big horn sheep, and prairie dogs. 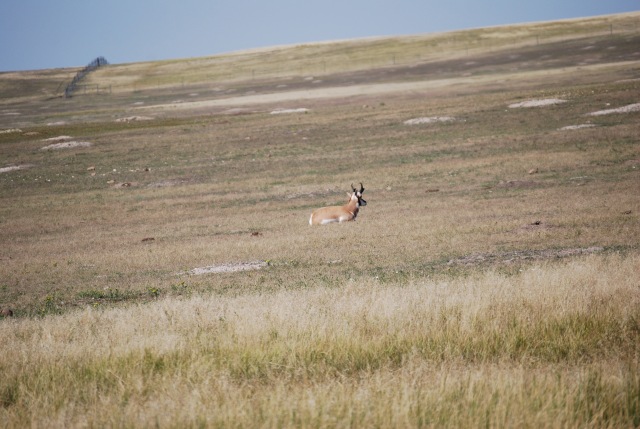 Taking the Back Road in

It was one of the highlights of the day, particularly watching the prairie dogs go about their business.

We got back to camp and with some ingredients picked up in town, made one of our camp tuna salads, washed down with white wine until it was time to head over to the amphitheater for another ranger program. 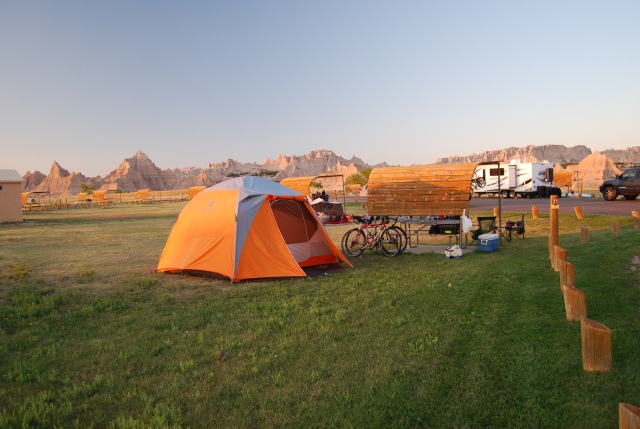 Like the night before we stuck around after the show to participate in the star talk, the night time sky clear and bright, famous constellations like the Big Dipper visible along with a broad swath of the Milky Way.  It had been a long but very good day.  We went to bed and slept well anticipating a big hike the next day and more adventures to come.