We’d be shifting locations this day, heading 130 miles west to Spearfish for four nights to get us closer to the tourist sites we wanted to visit, Mt. Rushmore, Crazy Horse Memorial and Wind Caves National blah.  We’d make a stop in Rapid City to drop off the Highlander for service, spend a couple of hours there and then head to our home for the next few days, Spearfish KOA.

We broke camp quickly and efficiently and drove out to I-90, then on to Wall where we stopped for a breif visit to the National Grasslands Visitors Center.  Not too large to cover in a short period of time, we completed our circuit of the displays, hit a nearby gas station for coffee and a donut and made way to Black Hills Toyota where we left the car and took their shuttle into the downtown section of the city.

The city fathers have done a good job of making this area attractive, a revitalizing effort that has encouraged shops, restaurants and bars to operate, creating a critical mass of services that ensures a successful downtown.  We got out of the shuttle at Main Street Square, children playing gleefully in the fountains there, the city’s commissioned sculptor, Masayuki Nagase, working diligently on the large project that has kept him occupied since 2013. 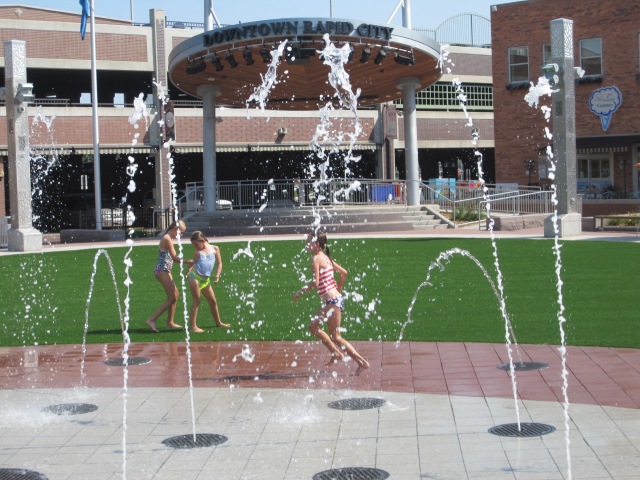 We walked a number of blocks, making note of potential lunch stops, dropping in to a bike store to buy a spare tube for my bike, then doubling back to Firehouse Brewing for some sustenance.  We ordered a beer apiece and a bowl of Gumbo (the soup of the day) and Rueben to split.  The beer was passable, the fare good for pub grub and we ate with gusto, having subsisted on camp food for the last three days.

Not long after we left the brewery Black Hills Toyota called to let us know the service was done; we shuttled back to the dealership, picked up the car, and drove to a Walmart close by to re-provision, including a tub of that previously mentioned ham salad.  Back on the interstate, we paused briefly for a drive through of Sturgis, famous for its annual rally.  Begun in 1938 by a group of Indian Motorcycle riders, it has evolved into being a meeting for motorcycle enthusiasts from around the world.  One of the largest motorcycle rallies in the world, it attracts over a 750,000 participants each year and makes up 95% of the city’s annual revenue.

With a population of a little over 6,000, the town itself is not much to talk about and so we continued on to Spearfish and the KOA there.  We had a choice of a number of camping outlets in the area, some closer to the action (Mt. Rushmore, etc.) but picked this one because of the positive reviews it received.  And they were all very accurate.  With camp set up, and after our big lunch, we lounged around, snacking on the rest of our Wisconsin cheese and summer sausage, a bit of that ham salad and as a capper, walked over to the lodge for the $3 all you can eat ice cream social they had each night.  Faithful readers of this blog will know that the KOA came out on the losing end of that transaction.

We had a full tourist agenda the next day, with Mt. Rushmore at the top of the list.  Our route there took as back on I-90 to Rapid City (quick stop for coffee and a donut, we’re becoming connoisseurs of gas station donuts) and an hour drive down to the National Memorial.

I’d been here once before, in 1967 when I was sixteen and traveling with my parents, the last true family vacation we would take together.  My Mom and sister flew back a week or so early to St. Paris, Ohio to stay with her Mother, my grandma Cuba.  A week or so later my Dad, brother Chuck, and I set out in the family 1963 Chevrolet Bel-Air Station wagon to drive to meet them in Ohio.  We’d spend a total of five weeks on the road, traveling from St. Paris to my Mom’s birthplace, Belle Valley, Ohio and then on to Clarksburg, WV to meet up with her Dad, my grandpa Charlie and his second wife Evelyn.

If you wonder where my love of travel comes from, it starts right here; my Dad and driving.  My Mom moving west before the war to escape small town life.  Charley and Evelyn.  The open road and camping.  It’s built into my DNA and comes from the nurturing I received as I grew.

There’s not much to say about Mt. Rushmore outside of what you may already know about it.  It’s impressive and a stirring testament to our country’s greatness, and the four presidents that the artist, Gutzon Borglum, felt most responsible for it.  We viewed it from the front, we walked the loop path that takes you below the face and gives you unique views of each of the presidents and finished with Borglum’s workshop, complete with the models he used to provide he and the workers with the measurements they would need to create the carving on the side of the mountain.

We left the site and drove 20 minutes or so to our next destination, the Crazy Horse Memorial.  Similar in concept to Rushmore, it is an ambitious project, commissioned in 1948 by Henry Standing Bear, a Lakota elder, to be sculpted by Korczak Ziolkowski, who had worked on the Mt. Rushmore project.  We had mixed feelings about this project.  In its heart it honors, per its foundations mission statement:

The Mission of Crazy Horse Memorial Foundation is to protect and preserve the culture, tradition and living heritage of the North American Indians

And yet they’ve been working on this colossal project for fifty years and may be working on it for another fifty due to Ziolkowski’s belief, now carried out by his children and maintained by the foundation that they won’t take any government funding.  By remaining pure to his vision they sacrifice the ability to attract more money, which would allow them to hire more workers and perhaps, move the project along a little faster.

The other problem, one money can’t resolve is the overall size of the monument.  The head of Crazy Horse will be 87 feet high; by comparison, the heads of the four U.S. Presidents at Mount Rushmore are each 60 feet high.  And the head at this monument is only part of the overall sculpture.  You have to pay an additional fee to take a bus ride closer to the work itself, which we opted not to do.  We grabbed a cup of coffee (free with our admission), sat admiring the view on a sunny day, then wound our way back to Spearfish, this time via Deadwood, which we would visit the next day. 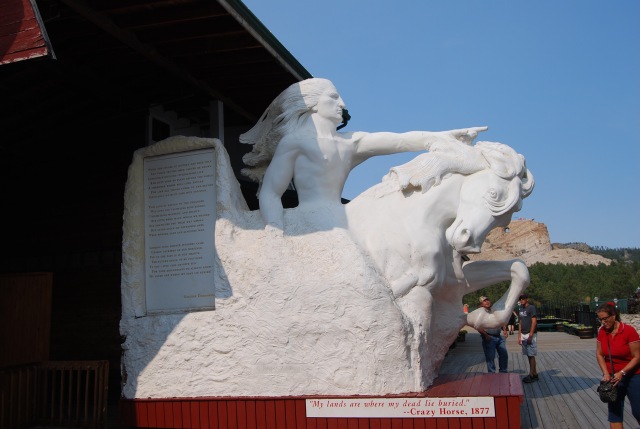 Our return was delayed slightly as we were leaving Deadwood by a small herd of big horn sheep that had decided to cross the highway, backing up traffic for a block or two.  Wildlife abounds here and drivers are wise to pay attention to the road signs warning of random interaction with all manner of four footed critters.

A short time later we arrived back in Spearfish and went straight to the Crow Peak Brewing just down the street from the KOA.  The place was jumping as we entered, full of folks enjoying a cold one after work.  We had a couple of beers while sitting outside and engaged a local cyclist about potential routes we could do from camp.  He suggested Spearfish Canyon, which we had heard about and would indeed ride a couple of days later.

Finished with our beers and quite hungry, we wandered a block down to Guadalajara, a Mexican restaurant we’d read good things about.  Here is the review I wrote in Trip Advisor:

We are so-cal natives now living in North Carolina and the one thing we miss the most is the style of Mexican we grew up eating. We stopped in here and had a very good meal with large portion sizes, a decent margarita and best of all a chili Relleno like it should be.

It had been a long full day and we’d accomplished two of the sightseeing objectives we’d set for ourselves.  Our plan would be to ride our bikes the next day and we floated off to bed, fed, hydrated and percolating with good feelings for the Black Hills.

Part of the Exhibit