Our next destination was Portland, two full days of driving ahead of us.  We’d split the distance almost in two and stop for the night near Boise.  Having done some pre-packing the night before, we broke camp early and were out by about 7:30am.  It was quiet in Moab, a Sunday morning without much shaking and we hit the McDonald’s two blocks over to take advantage of the buy on get one scam I’ve been running with them.

At the beginning of the trip we stopped for Egg McMuffin’s and our receipt directed us to take a survey.  Once accomplished we filled in a code on the receipt good for a buy one get one within thirty days.  This would be our second fulfillment.  Say what you want about McDonalds, the breakfast sandwiches are tasty, the coffee pretty good and in this case, the topper, they had a bag of ice for 99 cents.

In no time we made it up to I-70 and motored towards Salt Lake City, arriving a little before 11am and stopped at the REI Co-op there to check on a day pack I was considering buying, the Osprey Kestrel 32 Liter National Park 100th Anniversary model.  I’d seen a size small/medium in Charlotte and was curious to try one on, or see if a medium/large was available.  Joanna and I are seriously thinking about hiking the Camino de Santiago next year and the larger size with a full 32-liter capacity would be just right for this adventure.  And I really liked the color and logo. 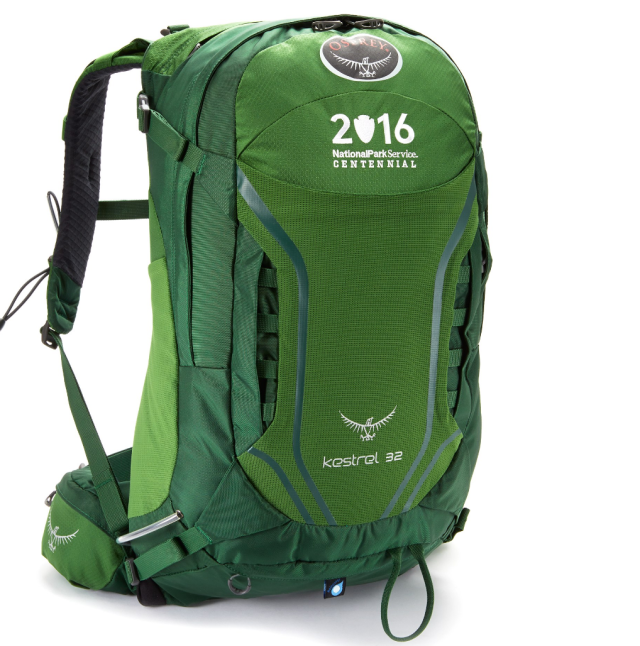 I tried on a small/medium and the sales associate confirmed it was a shade too small; he checked inventory at other REI locations on his smart phone and advised they had one left at the Medford, Oregon store.  Since we would be passing through there in a week or so he suggested I go over to the customer service desk and do a purchase hold there.  I did exactly that, confirming again why I like to shop at REI; good customer service, generous return policy, reasonable prices and that ten percent rebate to members at the end of the year.

Finished with our shopping expedition, we hopped back in the car and continued motoring west the rest of the day to our destination for the night in Boise, the Best Western Vista Inn adjacent to the airport and right off the interstate.  Check in went smoothly but upon arriving in our room we encountered the first of two glitches, both of which would get resolved satisfactorily.  The first was that the desk chair was too low and could not be adjusted.  A call to the front desk brought us a new chair almost immediately, delivered by the woman who had checked us in.

Later we couldn’t get the TV to work and again, our call was promptly dealt with by a maintenance worker who came up and simply changed the input on the unit.  Generally, hotels freeze this option, that is you can only watch the input they restrict you to.  In this case the TV was wide open, something not mentioned in the complex set of in room instructions on its use.

For dinner we walked next door to the Kopper Kitchen, where we’d been advised we’d get a 15% discount if we mentioned we were hotel guests.  We chose to sit in the bar, watching a bit of Sunday night football and were served by the female bartender, who efficiently and effervescently met our needs.  We both ordered beers from a local brewery, I a Pale Ale and Joanna a Blonde and waited for our food, a Rueben for her and a Senior Citizen’s Fish Dinner for me.  Just living the dream, you know.

When the food arrived we were presented with a very large sandwich, so much food we took a half with us and ate it the next day.  My fish dinner was quite good, accompanied by fries and Cole Slaw.  Having eaten only half of the sandwich, we opted to get a piece of pie, lemon meringue being recommended and when it arrived, the bartender said she’d given us a large piece.  She wasn’t kidding as it was gigantic.  We ate about half of it and took the rest with us as well.  It wasn’t the best pie I’ve had, the lemon filling including a bit too much gelatin and not enough lemon, but this is just a small complaint, given the total tab was $32.84 not including the tip and we’d get another meal out of the stuff we took with us.

We got gas on the way out of town the next morning and continued west, making good time as we entered Oregon, enough to spare that we stopped to take a tour of the Pendleton Woolen Mill in the town of that name. 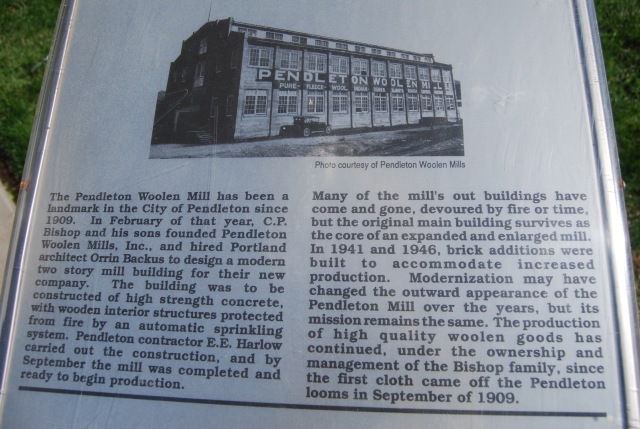 We’d arrived just in time for one of the two tours of the day, assembled in the waiting area and then proceeded to spend an interesting 30 minutes or so immersed in the process that turns raw wool into thread and in turn into Pendleton’s signatures woven products.

Spools Ready to be Spun

One More Step in the Process

Finished with the tour, we walked over to a picnic table adjacent to the factory for a picnic, devouring the rest of the Rueben and lemon meringue pie from the night before.  The rest of the drive into Hillsboro, a western suburb of Portland went easily, the broad waters of the Columbia river a constant on our right side, as we ticked off landmark after landmark on the way to town, including the John Day, Dalles, and Bonneville dams and the lovely Multnomah Falls, which we’d visited some years prior with Norm and Mary.

At the Inspection Station

We were on our way to see Colleen and Brian, who we’d last spent time with at their wedding in Spokane in 2007.  With directions Colleen had given us to help us avoid Portland traffic, we left I-84 east of downtown and crossed the Willamette River via the St. John’s Bridge, then took Germantown Rd. over the mountain at Forest Park to wind down into the outskirts of Hillsboro, our eventual destination.

After a quick stop at Trader Joe’s, Colleen and Brian were both home when we arrived, parking in front of their rental townhouse.  Greeted warmly by our longtime friend Colleen and soon to be new found friend Brian, we settled in to a home cooked meal, wine and an evening of conversation that brought us all up to date.  We looked forward to the next few days, getting to know these two better, seeing Colleen’s youngest son Lee and exploring Portland, a town we’d spent not nearly enough time in.  The best was yet to come.