Upon returning home from our fall west coast trip, the days turned into weeks and those into months, as we spent time with friends, riding our bikes, hosting our nephew Dillon (with a surprise addition from sister Bev) at Thanksgiving and preparing for the Christmas holiday season. Before we knew it Christmas Day arrived and found us once again at Charlotte Douglas International waiting to board our non-stop American Airlines flight (they dominate this airport with something like 85% of all flights) to San Francisco.

And we waited, and then waited some more as the plane arrived, the passengers filed off, and the minutes ticked by. Around the time we were supposed to board an announcement was made that the plane needed to be cleaned but that we’d soon get started boarding, which we finally did about 30 minutes behind schedule. Seats filled up smoothly, luggage got stored in the overhead bins and after the doors closed, the pilot came on the intercom to advise us that the plane wouldn’t make it to San Francisco and we’d have to return to the gate and wait for instructions.

So we all filed off, hung around the gate a bit and then crossed over to the other side of the terminal to await our replacement plane. All in all, it went as well as could be expected and we ended up taking off roughly 90 minutes later; not bad given that it was Christmas Day and the entire flight could have been cancelled. From here on our flight went smoothly although a stewardess did chastise me for bringing my own mini-bottles of Jack Daniels on the flight; I’ll just have to a bit more surreptitious in the future.

We ended up arriving just a little over one hour behind schedule and after retrieving our checked luggage (they were some of the first bags off) from the carousel made our way to the BART station to find a train waiting there, catching a break on the timing and soon found ourselves walking up the stairs at the 12th Street and Broadway station to be greeted by Kim and Marty who would walk with us to Kris and Jessica’s apartment to celebrate another family Christmas, this time with the addition Kim’s brother, Kris (aka Griz) and his wife Pam, Kris’ Uncle (and namesake) and Aunt.

We’ve lived in Charlotte since 2008 and this marks our ninth Christmas while there, all spent back out on the West Coast. Most took place in West Los Angeles, one or two in Las Vegas and now our new tradition, in Oakland. Someday we’ll get to host one in Charlotte, but for now spending it with Jessica and Kris makes the travel worthwhile.

The next day Kim, Marty, Griz and Pam gathered back at the apartment for a nice breakfast and a bit of time spent playing games with the virtual reality headpiece attached to Kris’ Sony PlayStation. Late morning found aunt and uncle heading back home to the Sierra foothills and with a bright sunny day beckoning, the rest of us walked about a mile towards Jack London square to stop in at a favorite Oakland destination, Beer Revolution.

A dive like spot with a nice outdoor patio and a bathroom with questionable sanitary surfaces and a door that doesn’t lock, its large and excellent selection of craft beers makes you overlook those shortcomings. We ordered our first round and repaired to a table outside, chilly enough to need a jacket and yet pleasantly comfortable in the sun. 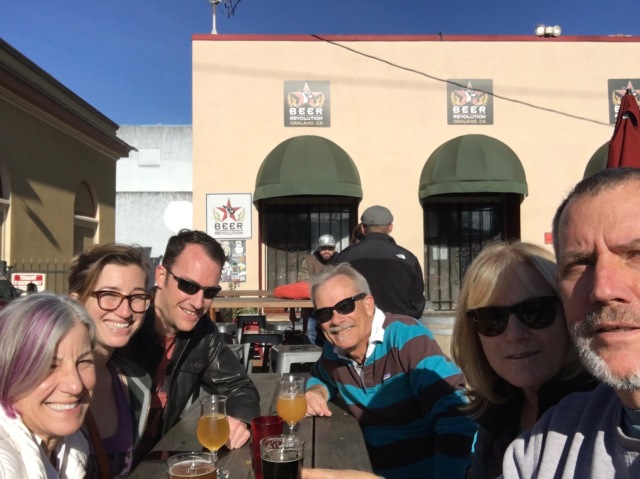 As we began our second round, food became an object of interest; our original intent was to order from The Annex next door, a burger joint affiliated with Beer Revolution, but they were closed, so Kris went around the block to Nation’s Giant Burgers, a Northern California chain, and brought back two large burgers and fries that we split between the six of us.

Back at the apartment, Kim and Marty said their farewells as they were heading home to Las Vegas, to return to Southern California later in the week to watch a family friend’s daughter march in the Rose Parade. Dinner for us would be leftovers from the day before, roast chicken and a large Honey Baked Ham that we would still be eating from until we left for home the next week.

On Monday Joanna and I took off for two nights in Redwood Country at the base of the Avenue of the Giants and one in Napa to visit with Joanna’s Uncle Matt and Aunt Shauna. We dawdled a bit leaving town, making a stop at both the North Face and Royal Robbins outlets on Gilman St in Berkeley as I’d forgotten to pack a second pair of pants; I thought I might be able to pick up an inexpensive solution at either one but unfortunately, nothing struck my fancy. 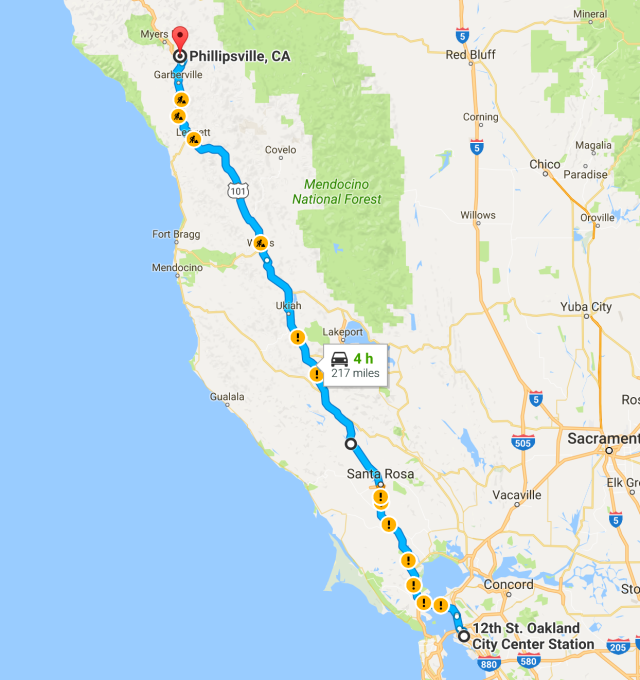 We arrived at our lodging for the next two nights, the Madrona Motor Court, an Airbnb property in Phillipsville at the entrance to the Redwood Highway. Here is my review from Trip Advisor:

I’ve found when traveling that one must adjust their expectations to meet the reality of one’s location. This is the case for the Madrona. When we did our initial research on where to stay for our two nights at the Avenue of the Giants, the price of lodging was a shocker. So we opted for the Madrona as it fit our budget better than the others. So yes, the place is run down a bit, but we found the room to be clean and tidy. Parking is awkward, but the setting explains the reason, an old style motor lodge bumped up against the hillside. We visited between Christmas and New Years and indeed the restaurant across the street was closed, but so were many others in this region, not the Madrona’s fault. So if you want high end in this area, prepare to pay greater than high-end prices.

As my review indicates, the restaurant at the Riverwood Inn across the street was closed, as it turns out many of the options within a short drive were as well. So we ended up walking down the highway to the Deerhorn Market to get a bottle of wine and some other supplies. We discovered that they had some ready to go food in the case, very nice sandwiches made by the owner’s wife and we picked out a couple. As we paid for our food, we engaged the owner in a nice conversation (turns out he was selling the place and would be turning over the keys in a day or so) and then walked back towards the Madrona, stopping in at the bar at the Riverwood Inn for a beer apiece and to eat our sandwiches. 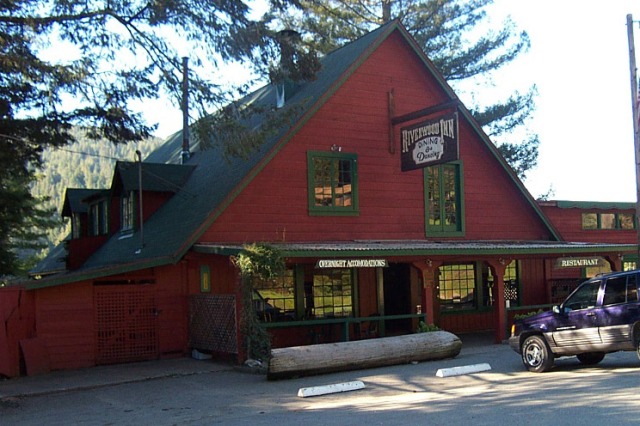 There was just one other customer with us in the bar; apparently a local and we listened in as he talked with the bartendress and a woman who was likely the manager, or possibly the owner. Everyone was friendly and talkative; perhaps a condition of living in a less populated area, and it made our brief visit at the Inn a bit more enjoyable. 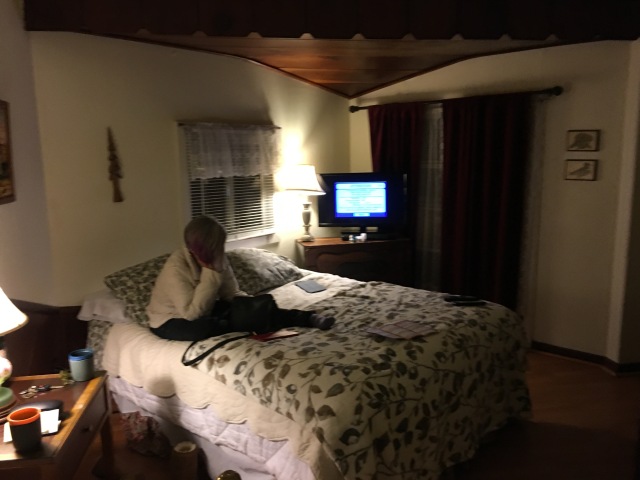 Our Cozy Room at the Madrona

We returned to our room for a quiet evening, reading, watching a bit of mindless TV, sipping on some Makers 46 (I got a bottle for Christmas, a generous and welcome gift). We had a full day of sightseeing planned for the next day and we were ready to get out there and enjoy it.