Free Music in the Sun

Back on Beale Street, we stopped midway down the block (almost all the action occurs in just one block) at King’s Bar, a place we’d seen in one of our prior visits, that has a patio between two buildings that features a stage.

The purchase of a Hurricane, and later a big ass beer, secured us a cover charge less seat at a picnic table where we would spend an hour or so listening to an enthusiastic cover band play familiar tunes. 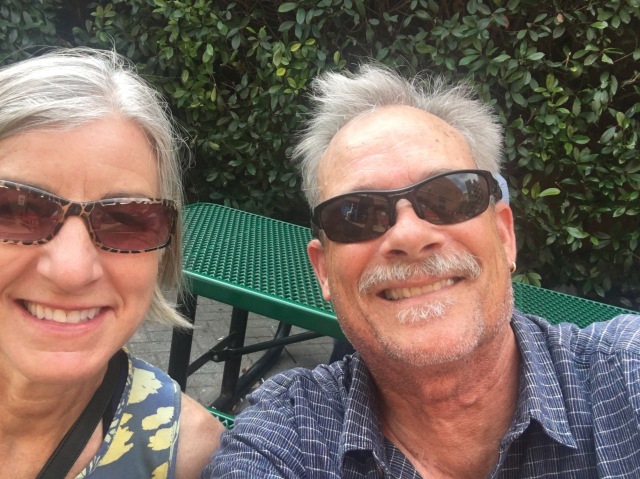 Fun in the Afternoon

We’d walked a bit of distance that day so it was nice to sit in the sun, sip on the drinks, listen to some songs and watch those around us get caught up in the music.  Soon enough, we returned to the car and drove to our last stop of the day, Sun Records, for a tour of the building that houses the studio that rightfully claims to be the birthplace of rock and roll.

Opened by rock-and-roll pioneer Sam Phillips in early 1950, it was originally called Memphis Recording Service, sharing the same building with the Sun Records label business.  Reputedly the first rock and roll single, Jackie Brenston and his Delta Cats’ “Rocket 88” was recorded there in 1951 with song composer Ike Turner on keyboards, leading the studio to claim status as the birthplace of rock & roll.  Other Blues and R&B artists like Howlin’ Wolf, B.B. King, Johnny Cash, Elvis Presley, Carl Perkins, Roy Orbison, Charlie Rich, Jerry Lee Lewis, and many others, recorded there throughout the 1950s.

The tour was interesting, taking us upstairs to a museum of sorts featuring memorabilia from the studio’s heyday, including a part of a radio station broadcast booth and finishing with some time back downstairs in the original studio where we got to hear about the infamous session that started the career of Elvis:

After some disappointing early sessions with Elvis, Phillips invited two local musicians, guitarist Winfield “Scotty” Moore and upright bass player Bill Black, to work something up with Presley for a recording session held the evening of July 5, 1954 proved entirely unfruitful until late in the night.  As they were about to give up and go home, Presley took his guitar and launched into a 1949 blues number, Arthur Crudup’s “That’s All Right”.

Moore recalled, “All of a sudden, Elvis just started singing this song, jumping around and acting the fool, and then Bill picked up his bass, and he started acting the fool, too, and I started playing with them. Sam, I think, had the door to the control booth open … he stuck his head out and said, ‘What are you doing?’  And we said, ‘We don’t know.’ ‘Well, back up,’ he said, ‘try to find a place to start, and do it again.'”

Phillips quickly began taping; this was the sound he had been looking for and three days later, popular Memphis DJ Dewey Phillips played “That’s All Right” on his Red, Hot, and Blue show. Listeners began phoning in, eager to find out who the singer was. The interest was such that Phillips played the record repeatedly during the last two hours of his show. ** 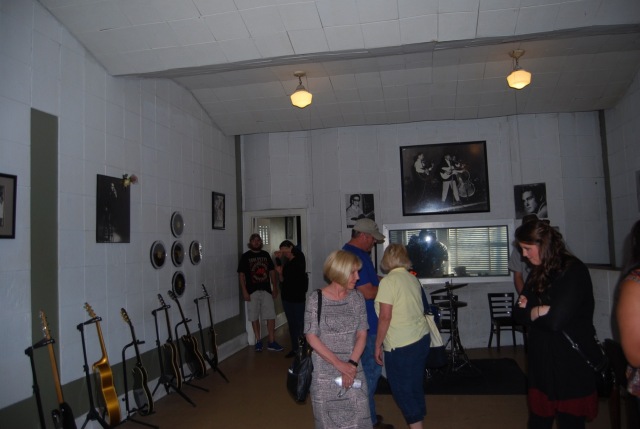 At the end of the tour we drove back to the house, stopping at a Taco Bell for a cheap dinner.

Traveling without access to cooking facilities means eating out all the time.  Every few days the need for an inexpensive uncomplicated meal arises and this was as good a place as any to get one.  Back at the house we killed time until dark, when we returned to Beale Street to catch some of the night time energy and to take pictures of the many neon signs outside of the bars and restaurants.

Bikes on the Block

We parked a block or so off Beale and walked over to discover a mass gathering of motorcycles with bikes parked up and down the street on both sides.  The noise, not quite deafening, certainly got your attention; many voices, music pouring out of bars up and down the street, motorcycles starting up and shutting down, a stream of them cruising from one end of the block to another, all that sound reverberating between the brick store fronts that lined the street. 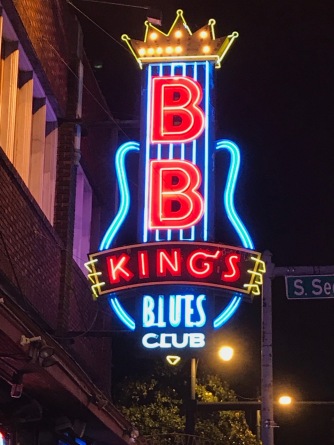 We bought yet one more big ass beer and walked both sides of the block, taking pictures of as many of the neon signs as we could.  We’d thought about spending some time inside one of the bars listening to music but it seemed better just to hang out on the street and watch the show in front of us, particularly some that had interesting secondary lights installed at various spots on their motorcycles.

We didn’t dawdle the next morning as we prepared for the seven-hour drive to Orange Beach, Alabama, our destination for the Leigh and James’s wedding, and also so we could run by one landmark we’d not had time for, the National Civil Rights Museum and the Lorraine Motel where Martin Luther King, Jr. was fatally shot by James Earl Ray.  The original hotel was purchased in 1945 by Walter Bailey who, during the segregation era, operated it as upscale lodging that catered to a black clientele.  During the 1960s many musicians going to Stax Records to record stayed here, including Ray Charles, Lionel Hampton, Aretha Franklin, Ethel Waters, Otis Redding, the Staple Singers and Wilson Pickett. 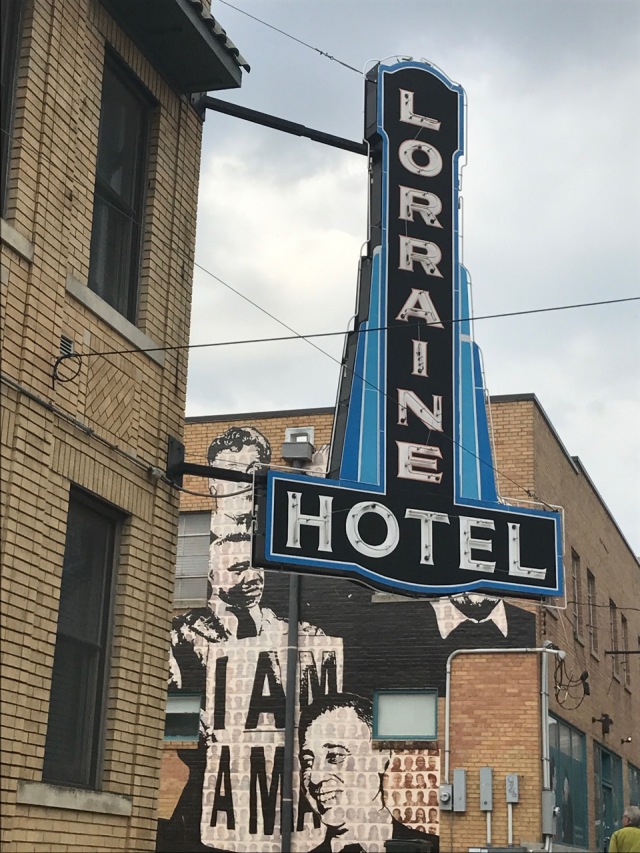 Following the assassination of King, Bailey withdrew Room 306 (where King died) and the adjoining room 307 from use, maintaining them as a memorial to the activist leader.  Bailey’s wife Loree suffered a stroke hours after the assassination, and died five days later. Bailey reduced the operation by converting the other motel rooms to single room occupancy for low-income residential use until its sale to the Martin Luther King Memorial Foundation in 1982. 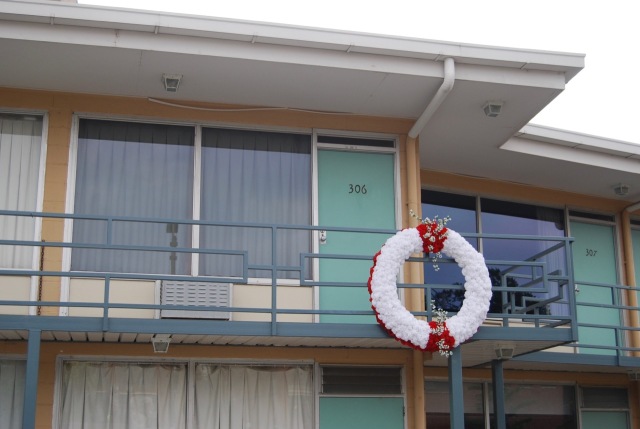 We’d arrived before the Museum was open, allowing us to spend time alone with the place and the memories it evokes.  We are part of the generation whose future was irrevocably altered by the assassinations of the Kennedy brothers and Dr. King.  We can only speculate as to how those three figures might have changed the path the United States would take should they have lived.  These places, and those memories, remind us of just how much we lost. 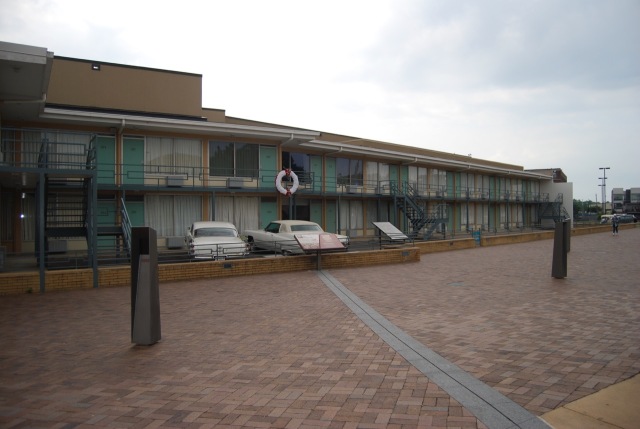 Sufficiently sobered by this early morning experience, we drove a couple of blocks away to Bluff City Coffee, a place we had spotted on the way in.  We ordered a coffee Americano and a scone to tide us over during the first part of the drive, figuring we’d get a full breakfast about halfway to Orange Beach.  It’s a nice shop, the kind of place you’d frequent if you lived in the neighborhood with quality baked products and a welcoming environment.

We took off for Orange Beach, stopping as planned for breakfast at a Waffle House, one of few choices on what was a scarcely populated stretch of interstate.  Having learned from our experience last fall we asked to see a full menu and subsequently ordered a ham and cheese omelet and pecan waffle.  This is reasonably priced food that is consistently prepared; not the best meal you will ever have but certainly not the worst, road food to get you closer to your destination.

We continued our journey south, chatting about our time in Memphis and all we had seen.  Three full days had provided us with a sufficient exposure to feel we had covered most of the basics.  Not sure when we might return but one never knows.  The birthplace of rock and roll can exert a powerful draw. 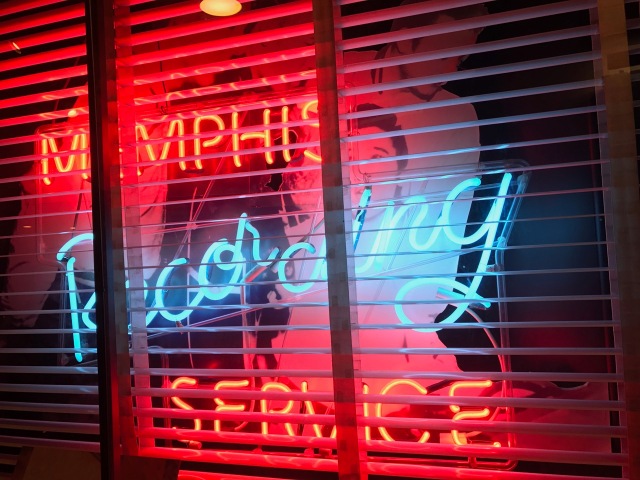 The Birthplace of Rock and Roll