With some driving and sightseeing ahead of us we didn’t dawdle at the Inn, making way a little after 10am heading due east for Columbus. We drove straight to the campus of Ohio State University, planning to park and take a quick tour of the new Student Union but were thwarted in our efforts when we arrived to discover that a day time concert featuring a big name country western star had rendered all parking on campus a flat rate of $20.

Twenty dollars richer times two cars by not parking, we made our way south on North 3rd Street for about five miles Columbus’ German Village. Settled in the early-to-mid-19th century by a large number of German immigrants, who at one time comprised as much as a third of the city’s entire population, it was added to the National Register of Historic Places in 1974, becoming the list’s largest privately funded preservation district. 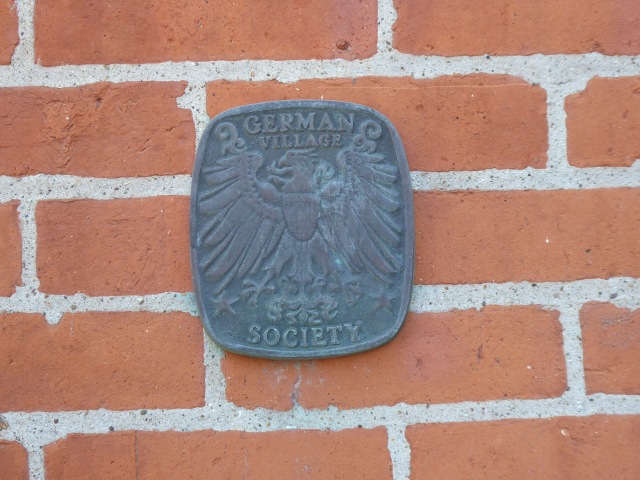 In the early 1950s, the city began an urban renewal process that leveled large areas, some of which were in German Village; exacerbating the area’s decline was its zoning for manufacturing, leading to the erosion of its residential feel.   With it nearing complete destruction, the German Village Society was created in in June 1960 and hosted the first Haus und Garten Tour, which attracted visitors and the local media to eight restored homes and two gardens. Today, the tour is one of the city’s most popular events. 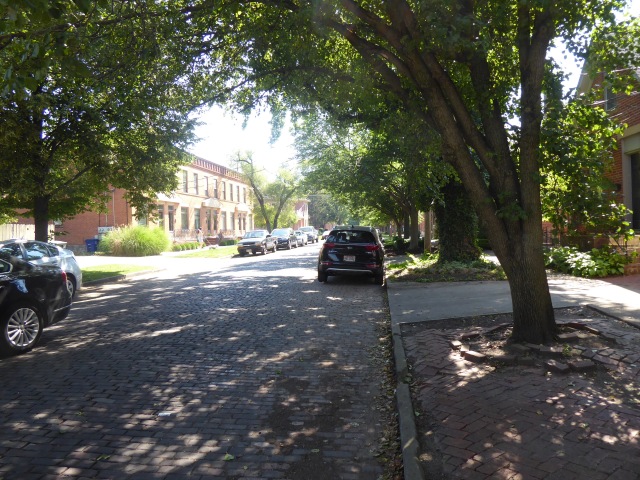 Arriving at this charming neighborhood of red-brick homes with wrought iron fences along tree-lined, brick-paved streets, we parked just as we entered the district and began walking, our destination Schmidt’s Sausage Haus, a well known eatery. We covered nearly a half mile, which turned out to be a bit much for Uncle Dale and so upon our arrival at the Haus, with a few moments to spare before it opened for business for the day, Joanna and I walked back to the cars and ferried them to the restaurant’s parking lot. 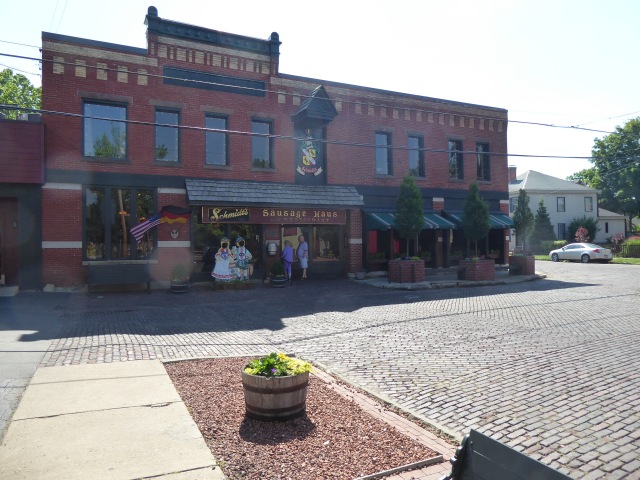 For a place that had just opened on a Sunday morning it was surprisingly crowded but we got a table soon enough and ordered a round of drinks, for Joanna a bottle of Rauchbier (smoked) and I a Gold Lager, similar to beers we’d get in Munich. Bev, Joanna and I decided t split the Old-World Sausage Platter, a combination of four house sausages served over hot kraut with German Potato Salad, chunky applesauce and a split top bun.

Dale and Debbie at the Haus 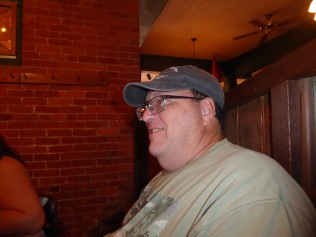 Marshall at the Haus

Although the sausage serving was smaller than we’d anticipated, essentially two large links, it was more than enough for the three of us and would leave room for, you guessed it, dessert. We ordered a Jumbo Cream Puff and an Apple Strudel. The puff was the winner, light and airy with a cream filling at just the right sweetness level. Curiously the strudel was a distant second with a thicker crust than desirable and a pedestrian apple filling. 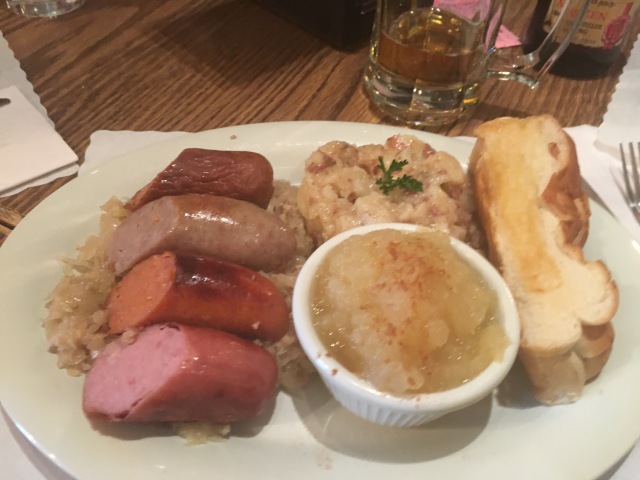 Lunch finished, we climbed back in the cars for the hour or so drive down to Caldwell and our two night stay at the Best Western Plus Caldwell Inn. As disappointing as the Urbana Inn had been, the Best Western shined, particularly for such nice lodging at under $100 a night including a bonus breakfast each day.

Prior to checking in we parked the Highlander in a commuter lot (where are people in this rural area commuting to?) and climbed into Debbie and Marshall’s Honda Odyssey to travel sixteen miles out to the Miner’s Memorial Park to catch a glimpse of the Big Muskie. 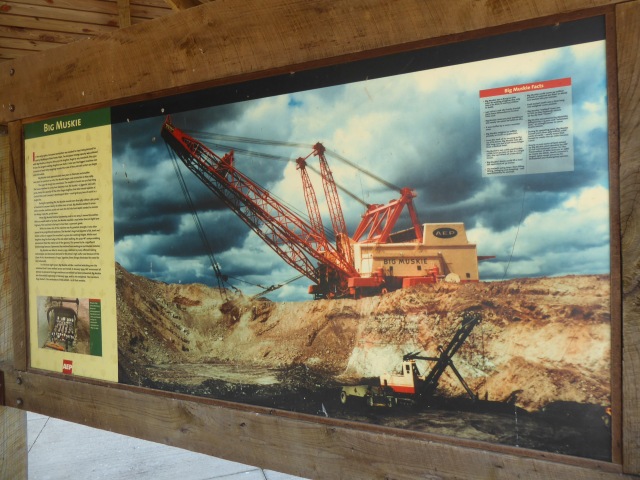 A model 4250-W Bucyrus-Erie dragline (the only one ever built) it is a 220-cubic-yard bucket, the largest single-bucket digging machine ever created and one of the world’s largest mobile earth-moving machines. It cost $25 million in 1969, the equivalent of $163 million today adjusted for inflation and its bucket could hold two Greyhound buses side by side.

It is emblematic of a now nearly forgotten coal industry that provided for the financial well being of this area, which is now experiencing a re-birth of sorts with the advent of fracking. A big driver of the short-term tenants at the Best Western we were staying at, this new industry provides a glimpse into the ebb and flow of small town/rural economics.

We returned to Caldwell and after a bit of down time walked next door to Lori’s, owned by the proprietors of the Best Western, and where we would eat our breakfast each day. Reviewing options in Trip Advisor for this smallish town (although it is the Noble County seat) the restaurant was just about our only option outside of fast food joints nearby. As with the Farmer’s Daughter in Urbana, we’d come to understand that restaurants in small towns survive or die based on the quality of their offerings. Being dependent on local traffic means you have to provide a consistently good product or folks will just eat at home. 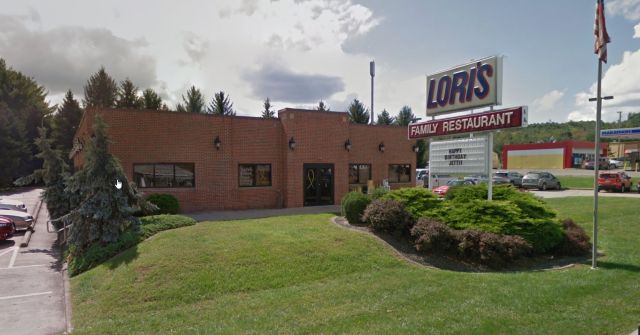 Our dinner would be filling and tasty simply prepared fare, providing a good value for the money spent. The next morning we’d have a choice of four items including Oatmeal, biscuits and gravy, pancakes or French toast and a two egg/potato/meat combo. That first morning I got the egg combo and was impressed not only with the serving size but the fresh quality of all of the items on the plate. I wouldn’t need to eat much for the rest of the day. 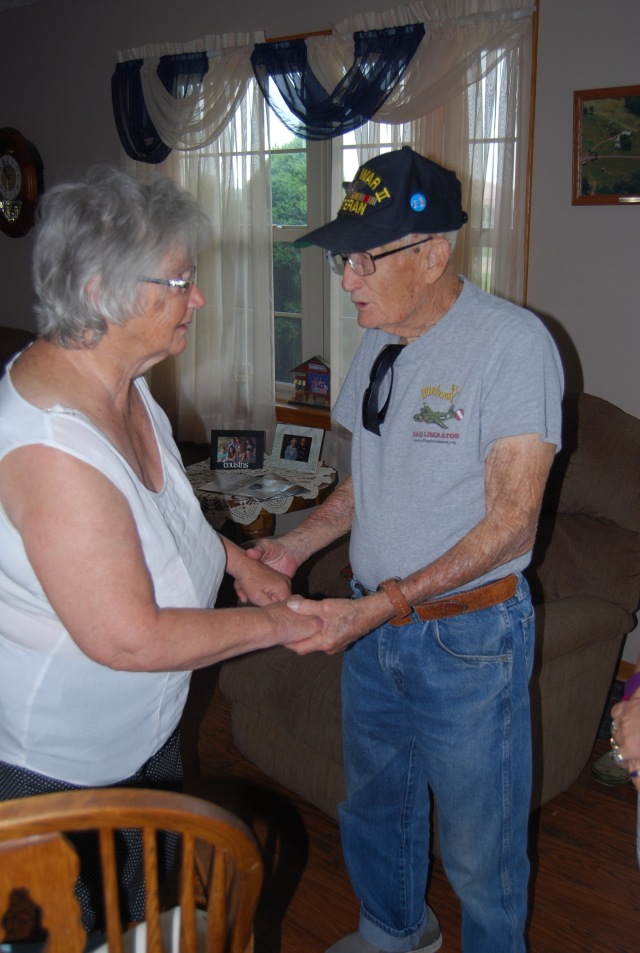 Our plan for the day would be to visit with Barbara, a cousin who lived near the former farm of our Grandma Pickenpaugh (multiple spellings exist), then hit the various graveyards between Caldwell and Dale and my Mom’s hometown, Belle Valley. We spent about an hour at Barbara’s, listening in while the two of them took a tour down memory lane. Barbara produced a school picture that featured my Grandma Cuba and a number of her sisters. Cuba is standing in the second row, sixth in from the left. Even then, you could see the woman she would become. 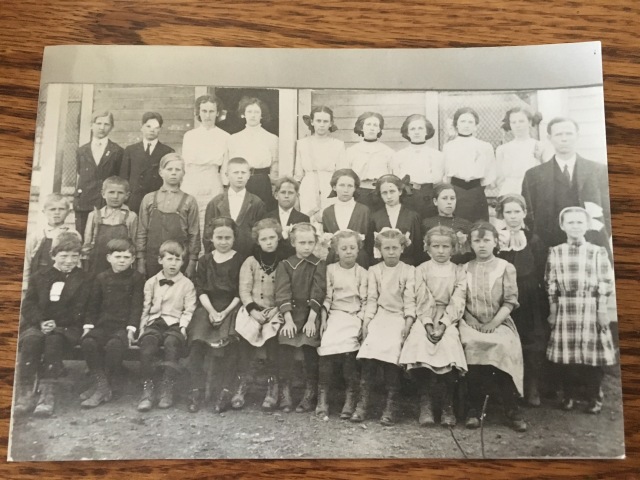 We left Barbara’s place and drove back to the intersection with McConnelsville Rd. and parked in the dirt, Uncle Dale remembering this as the location of Grandma P’s house and wanting to walk up an overgrown vestige of what once might have been a driveway. The grass was knee high and throwing aside concerns about poison oak or ivy, we plunged up a rise doubtful of a successful outcome when from a few paces back, Bev shouted out “I see a house” and sure enough, there it was, buried in the trees and bushes.

Keeping in mind that this was not as momentous occasion as say finding King Tut’s tomb, it was a highlight of the day for us, locating this physical manifestation of Uncle Dale’s memories, it still sitting there, decaying no doubt, but standing after all of these years. It reminds us that nothing is permanent, not even our recollections, but this old two story house is as good as we would get that day. 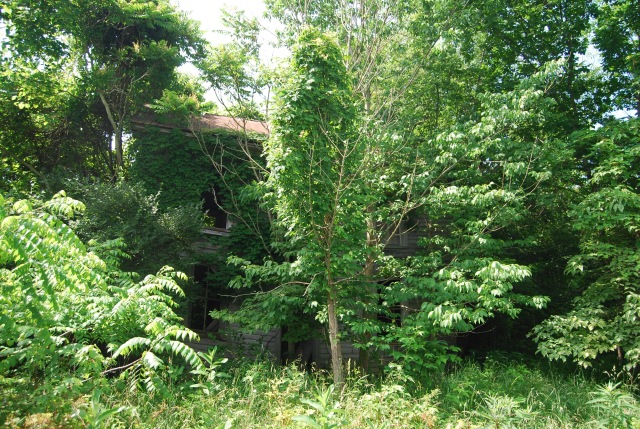 The House Hidden by Trees

We poked around the perimeter, wisely deciding not to risk entering while Debbie scavenged some of the wood to take home to make picture frames with.

Not Move in Ready

Standing there with my back to the house, I closed my eyes and brought to life in my mind what it must have been like for Dale to live here for a time, the land cleared, a view over the hills in front, the fields in the back, pulling cold clear water from the well, eating a hearty meal after a hard day’s work on the farm. 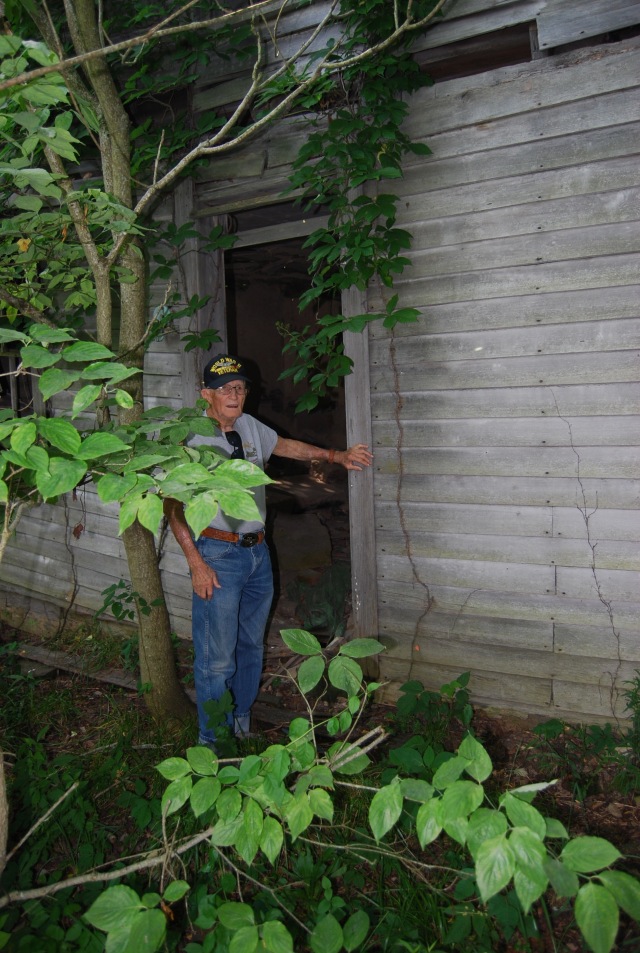 Dale at the House

We moved on eventually and I’ll report on the rest of the day in the next post but leave you here now hoping that some old house and some distant relative still speaks to you from time to time, securing a connection to your past. 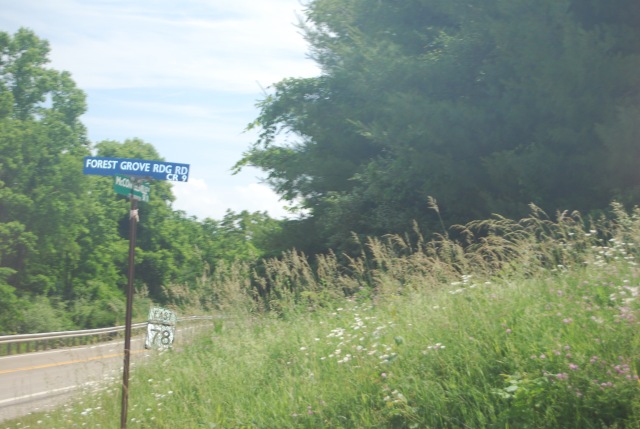