Up the next day, we looked forward to our visit to the Rock and Roll Hall of Fame (HOF) but first stopped to check out the Westside Market. Similar to other great indoor markets (Reading Terminal in Philadelphia, La Boqueria in Barcelona, etc.) with a large selection of food options, we figured we’d pop in to grab a coffee and pastry or two before hitting the HOF. We parked in the large lot adjacent to the building only to discover that the market is closed on Thursdays.

Disappointed but undaunted, we stopped for a brief look at the Glass Bubble Project, a glass making cooperative nearby and then were off to the HOF, parking in a garage connected to the Great Lakes Science Center.

A brief walk later we entered the striking seven story I. M. Pei designed building, which opened in 1993 and contains over 55,000 square feet of exhibit space, a nice café, and a very, very large gift shop.

Rock and Roll Hall of Fame

We’d purchased our admission tickets on-line, a relative bargain at about $22 apiece given the scope of the attraction and easily half what we paid to visit Graceland. Having missed out on food at the Westside Market, our first stop upon entering was the All-Access Café where we picked up a packaged Turkey and Swiss Cheese sandwich that was quite good for something pulled out of a refrigerated case, and a large cookie to fill that gaping hole left from our pastry less morning. As we were finishing our food a three-piece combo started playing on the stage at Café level, and would remain performing throughout our visit. 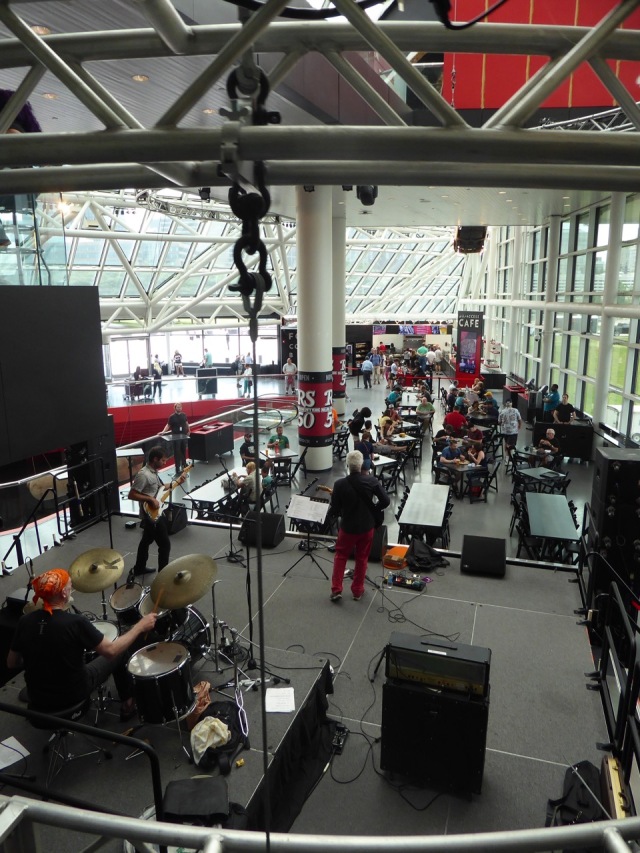 Looking Down on the Stage and Cafe

Energy stores topped up, we embarked on our visit, one that would stretch to nearly five hours by the time we were finished. We agreed to split up and meet back at agreed upon times in order to explore the exhibits at our own pace and level of interest. There is a staggering number of things to see and do here, ranging from static displays of memorabilia to interactive kiosks where, for example, one can pick a song and trace the roots and influences that led to its creation. 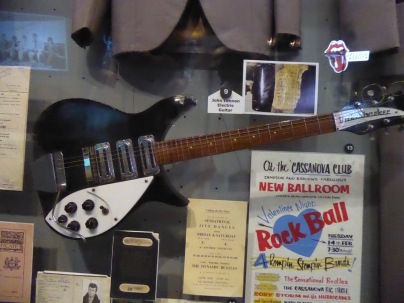 I’ve subscribed to RS since the early 1970’s and found myself lingering over handwritten correspondence between publisher Jann Wenner and Hunter Thompson and particularly enjoyed multi-walled display of RS covers from its five decades of publication.

We finished up and spent considerable time in the gift shop, sifting through an incredible selection of clothing, coffee mugs, and anything you could possibly put a logo on. We escaped with just a mug, magnet, and pin (with the work ‘Rock’ on it to send to James in Mobile) and left the building to queue up for a look inside Johnny Cash’s tour bus, which was parked outside. 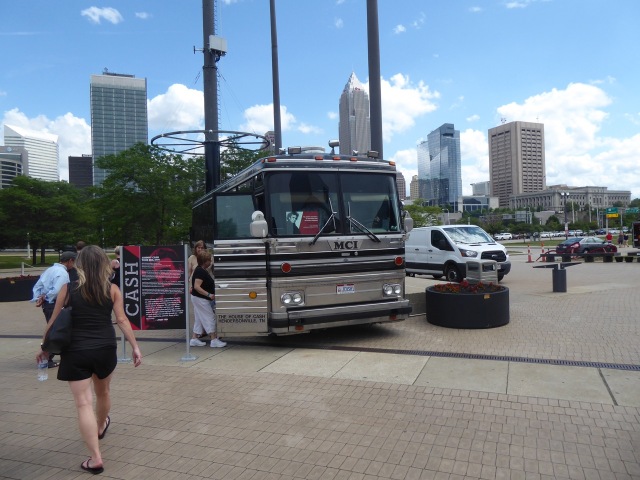 We retrieved the car and drove back over to the Ohio City area (home to the Westside Market), parked on street and walked to our dinner and drinking destination, Great Lakes Brewing.

While waiting for our outside table, we entered the bar area, ordered a round of drinks and sat in a booth, a large crowd with Cleveland Indian’s baseball hats on obviously killing time before that night’s game. We hadn’t been inside long when we got the call for our table, so walked outside to the patio and were seated. 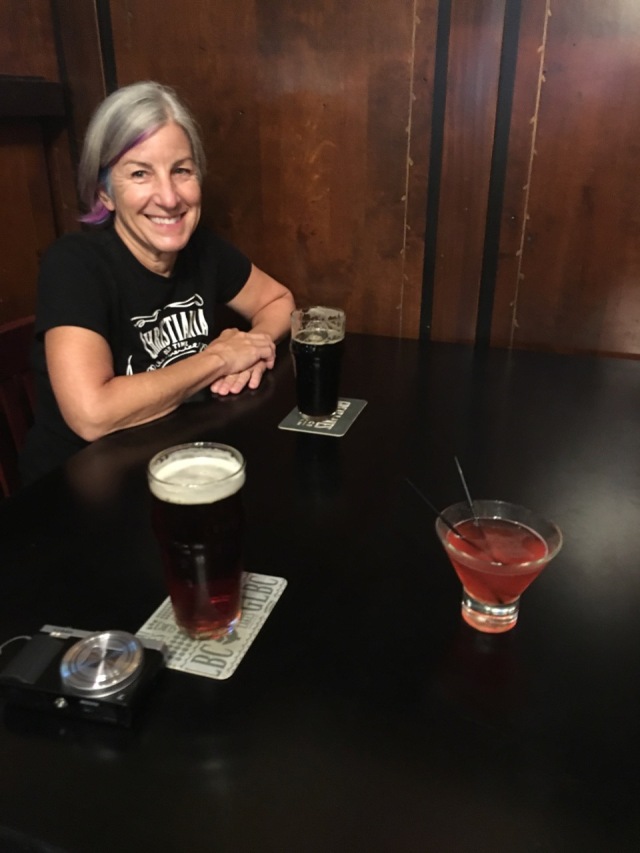 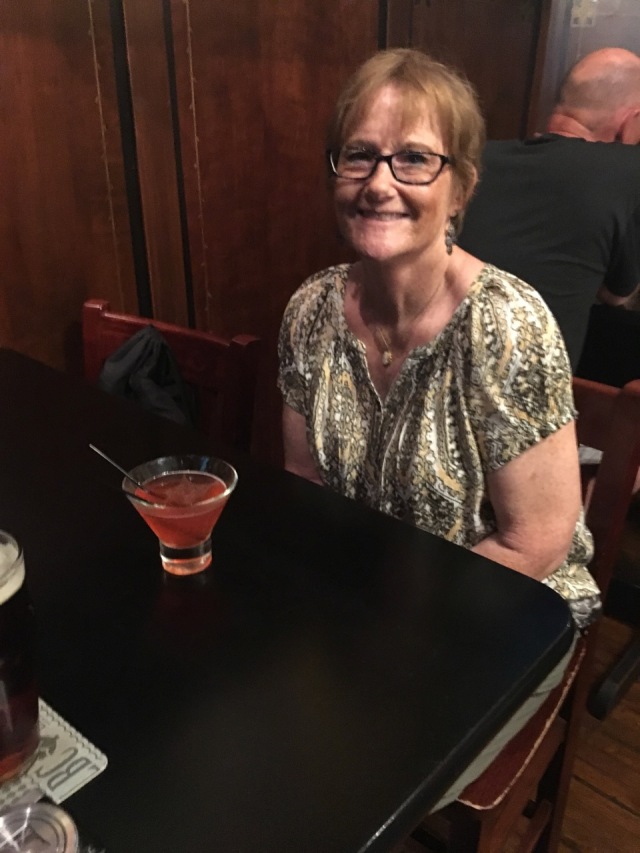 After a short time perusing the menu we settled on our choices, a starter of the Sausage Sampler (Four locally-made sausages, braised red cabbage, and mustard), Joanna and I to split the Mac and Cheese (Ohio City Pasta fagolini, Czuchraj’s smoked bacon, and Gerber’s Amish Farm smoked chicken) and for Bev the Cleveland Hero Sub (Pastrami, Genoa salami, Bavarian ham, Muenster, lettuce, tomato, onions, oil, vinegar, on rustic Italian bread from Zoss the Swiss Baker) and a side order of Pierogi because, well just because we were in a city famous for them. 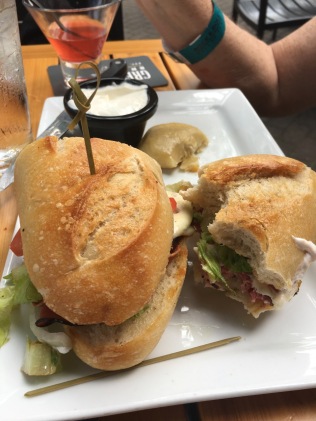 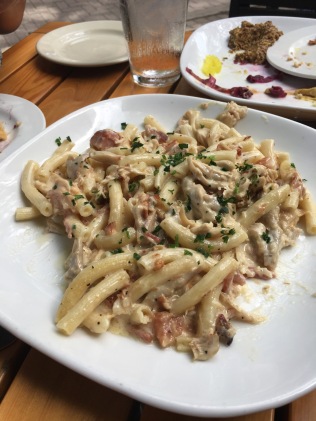 As often happens to us, it was way too much food, so much so that we took almost half of our Mac and Cheese and Bev’s sandwich back to the Urban Homestead. Tired after a long day of sightseeing, we fiddled around with the flat panel in the front room until we could figure out a way to stream to it and then happily watched the movie, In Bruges, as that town was one of Bev’s favorite to visit during her time with us in Europe in 2014. 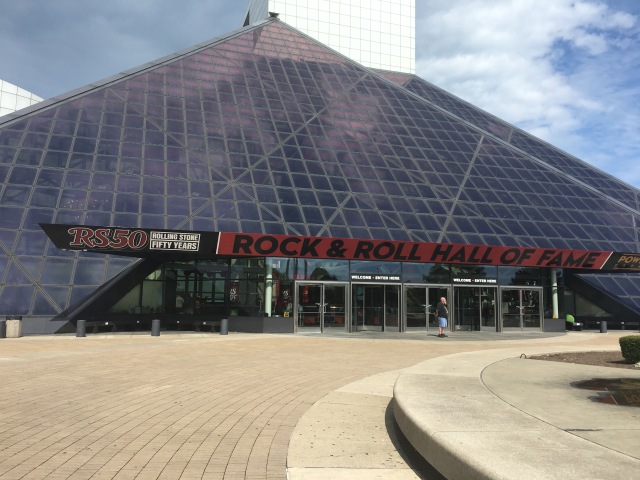 Our stay so far in Cleveland had gone well, with two good meals and an excellent visit to the Hall of Fame. We’d hit the streets the next day for a walking tour and finally get to spend a little time at the Westside Market. Good coffee and a pastry or two loomed on the horizon. It could be the start of a great day.