We rolled out of Kamp Angst as planned right around 9am with Fairfield, just outside of the Bay Area as our eventual destination.  As we entered Grants Pass we stopped to fill up the Honda, grab a large coffee at Dutch Brothers and make our obligatory stop at Cary’s of Oregon for a couple of bags of their delicious toffee, one dark and one milk chocolate.

Based on a previous experience with these delightful treats, we made sure to store them inside the car as higher temperatures tend to turn the individual pieces into a brick sized melding of chocolate and toffee, not so easy to consume without a pick or maybe a small chain saw.  All went smoothly on the drive down the I-5 until later in the morning as the temperature started to rise around Mt. Shasta.  That’s when we realized that the air conditioning was no longer working and knew we were in for another miserable drive.

We took a break in Redding at lunch time for, well you know where, yep at In-N-Out.  Full and refreshed we got back in the oven and completed the drive down to Fairfield to spent the night there at the Best Western Cordelia Inn.  We needed to be back in the Bay Area by Thursday morning and with hotel prices there hovering around $200 a night, found it expedient to stay an hour or so out of town for less than $100.

It also gave us an opportunity to have dinner with Joanna’s Uncle Matt and Aunt Shauna.  As they live in Napa we agreed to meet at The Runway located at Napa’s small airport, convenient for all as it was less than a 30-minute drive for us.  It’s always a delight to see these two and our time with them always seems too short when we visit.  It’s hard to cram a year or so of one’s activities into a brief evening’s conversation, but we all do the best we can. 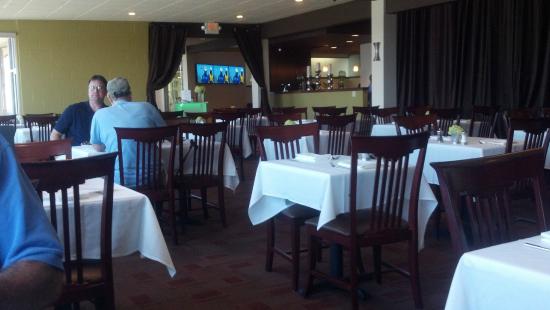 Dining Room at the Runway

This airport is similar to the one in Santa Monica, primarily there for the wealthy to dock their private jets, many of which were parked out on the runway outside the restaurants windows.  I ordered a beer to drink while Joanna and I decided to just split a couple of appetizers, the Chicken Pot Stickers and Vegetable Spring Rolls, as we were not so hungry after our burger lunch.  The food was good enough, nothing outstanding or horribly bad but what did stand out was how disjointed our service was. 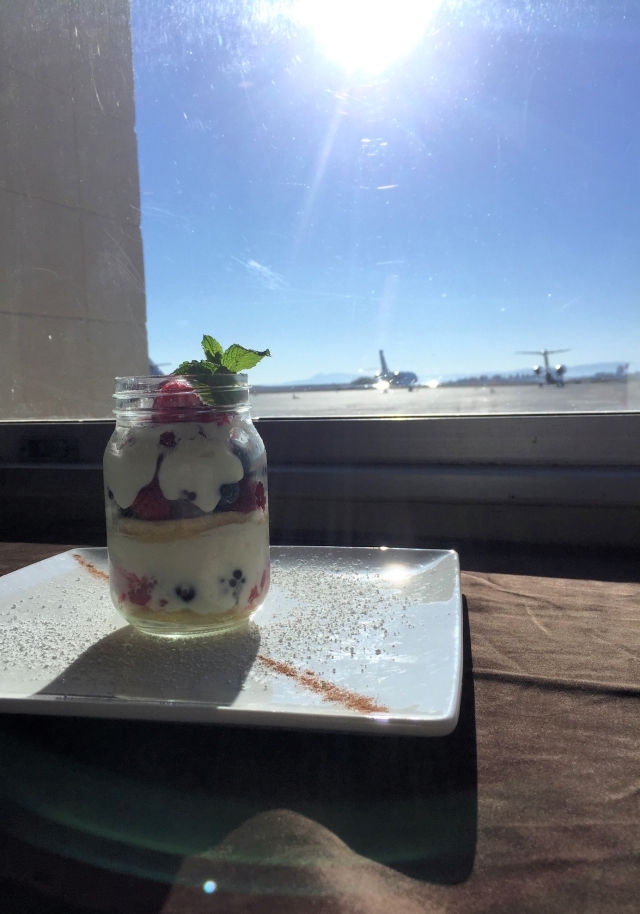 Planes on the Runway

The dining room wasn’t that crowded, just a couple of other tables, and yet our lone server couldn’t quite seem to keep up, or remember what folks had ordered.  After our initial order, Joanna asked for a glass of wine and after ten minutes or so, had to remind the waitress about it.  It was more humorous than annoying and didn’t distract us from getting caught up on the important events that had transpired since we had met last year.

With just an hour drive into Oakland on Thursday we could dawdle at the Best Western, taking care of housekeeping duties and checking on the status of the toffee, which indeed had melded into two solid bricks.  Our attempt to revitalize them by sticking in our room’s mini-fridge was for not, in fact it just seemed to make them even more solid.

We packed up and drove to the apartment, dropped off the car, picked up our wedding clothing at the cleaners (my suit, Joanna’s dress) which we’d left to have pressed, and waited for Kim, Marty, and Taylor (Kris’ middle brother) to pick us up for the ride over to San Francisco and the place we’d rented for the weekend, Potrero House. 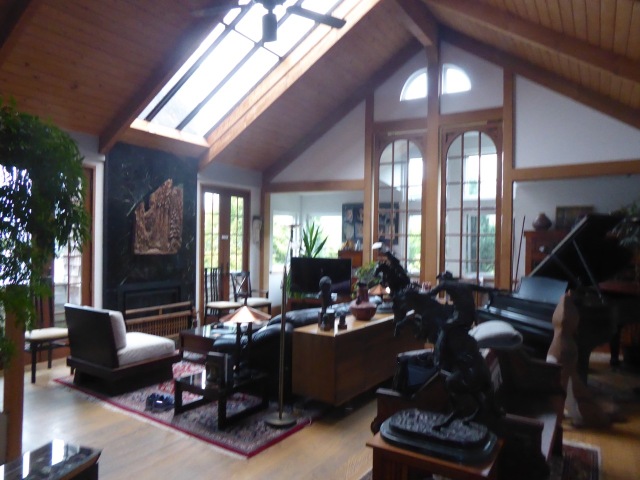 Owned by a consultant and entrepreneur with eclectic tastes, it was full of the collection of art and items he’d collected from around the world.  Built in the 1970’s, it had been remodeled at some point to include a master suite that was the best feature of the house, with sauna paneled shower and sweeping view of San Francisco.

We’d originally planned to meet other wedding attendees at a bar somewhere, but delays in getting to the city (a traffic jam on the Bay Bridge) meant we’d arrived at the house later than anticipated.  So, Marty and I drove over to a nearby Safeway to pick up provisions for the weekend and returned to the house to host my sister Bev and her youngest son Dillon (you’ll remember him from the Copenhagen Blog Posts) and socialize for a bit.

One positive element of the house was the large cutting board and collection of knives available to us to perform what was essentially a mining operation on the toffee.  With toffee paced flat on the surface, one would take a large knife and place it blade down on the top of the candy.  Then with another knife (we found a regular dining table one worked well) you bang on the big one until a chuck of toffee separated.  Elegant?  No.  Effective?  Yes. 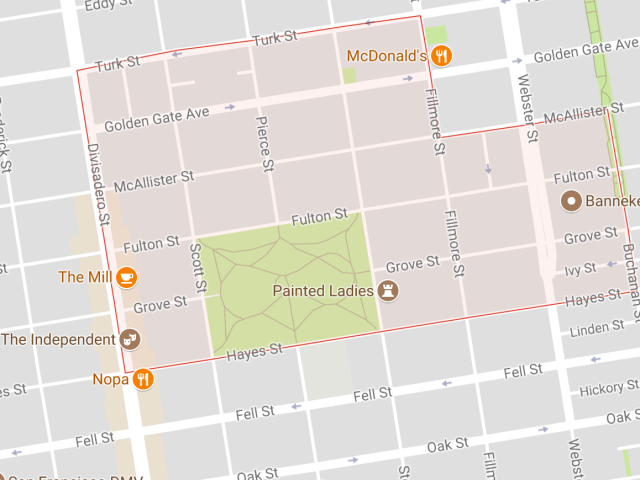 Friday morning Joanna took off for Oakland to meet Jessica for some Mom and Daughter time and after she returned the five of us (Kim, Marty, Joanna, Taylor, and I) used Uber (we also utilized Lyft throughout the weekend) to meet the kids and rest of the wedding party for a picnic at Alamo Square Park, a hillside gem directly across the street from the well-known Painted Ladies.

This was when it really hit home that after all of the months of planning and the travel earlier in the week with Cisco Fest and Kamp Angst to distract us, that we were here for Kris and Jessica’s wedding. 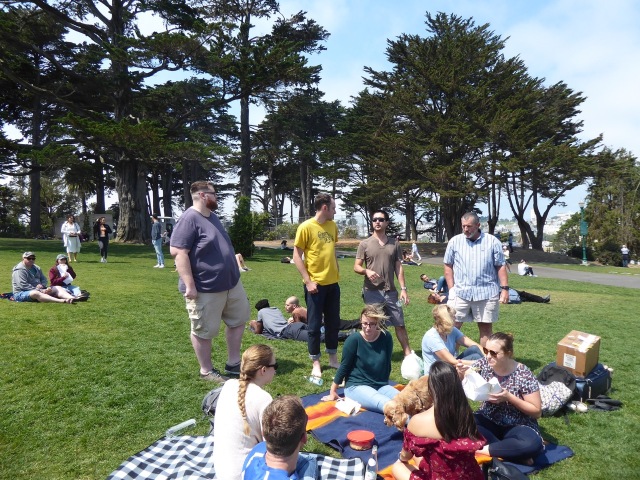 Surrounded by family and this group of their great friends, some from childhood, others from college and new ones made in the city, it was time to start the celebration. 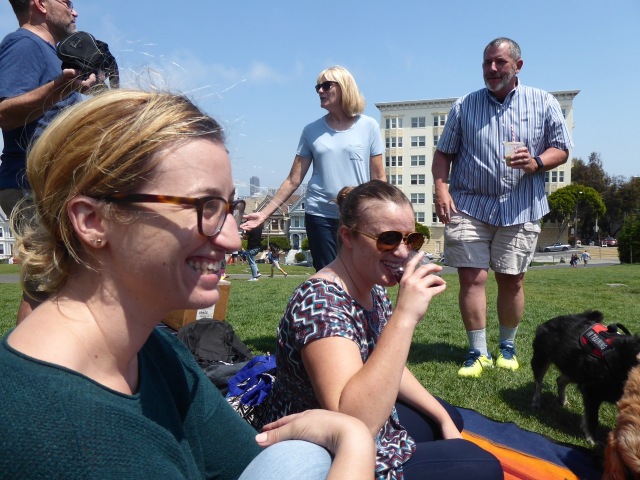