Waiting for the Bus

After another filling buffet breakfast, we gathered in front of the hotel for 8:30 am start to get to the Olympia site before the cruise ship tours arrived.  We arrived at the site shortly thereafter and entered the Sanctuary of Olympia archeological portion to spend a couple of hours touring each of the ruins with special attention on the Stadium.

Rainbow on the Way to Kronos Hill

We started at Kronos Hill, believed by the ancient Greeks to be the birthplace of Zeus, and moved on to the Gymnasium, the largest building in the whole sanctuary, built in the fourth century B.C.  Here athletes trained for events such as the sprint, discus throw, and javelin throw.  Because ancient Greeks believed that training the body was as important as training the mind, sports were a big part of every boy’s education.  Moreover, athletic training doubled as military training so most towns had a gymnasium, a word that come from the Greek gymnos (naked) which is how athletes trained and competed.

Athletes arrived in a nearby town a month early for the Games in order to practice and size up the competition.  The Games were open to any free-born Greek male (men and boys competed separately), but a good share of the competitors were from aristocratic homes.  Athletes trained hard; beginning in childhood they were given special diets and training regimens, often subsidized by their city.  Many became professionals, touring the circuit of major festivals.

Adjoining the gymnasium was the small but similar wrestling school (Palaestra), built around 300 B.C.  This facility was used by athletes to train for smaller-scale events; wrestling, boxing, long jump and pankration, a kind of ancient “ultimate fighting” with only two rules, no biting and no eye-gouging.  Besides being training facilities, Palaestras (found in almost every city) were also a kind of health club where men gathered to chat.

We walked over to the Temple of Zeus, the center of ancient Olympia both physically and symbolically and dedicated to Zeus, king of the gods and patron of the Games.  It was the first of the Golden Age temples, one of the biggest (not much smaller than the Parthenon) and is the purest example of the Doric style.

The Temple of Zeus

Built in the fifth century B.C. it stood for a thousand years, crumbling into ruins in the sixth century A.D.  Originally almost a half-acre in size and six stories high, the lone standing column is actually a reconstruction of pieces of the original which were cleaned and re-stacked.  It’s 34 feet high, 7 feet thick, and weighs 9 tons.  It was one of the 34 columns that surrounded the temple; 6 on each end and 13 along the sides.

As we walked to the south side of the temple, we passed the spot of the original olive tree (planted by Hercules legend has it) from which the winner’s wreaths were made.  We soon came upon the 29-foot-tall white-marble triangular Pedestal of Nike which once held a a statue of the goddess Nike, the personification of victory.

We soon entered the stadium; built in the fifth century B.C. it could hold 45,000 spectators who sat on the manmade banks on either side of the track.  At 192 meters (640 feet) from start to finish, the Greek word stadion literally means a course that is 600 traditional Olympic feet long, supposedly marked out by Hercules.

Entrance to the Stadium

The racers ran straight up and back on a clay surface, not around the track, and there were 20 starting blocks (all still visible today), each with two grooves, one for each foot (athletes competed barefoot).  Wooden starting gates, similar to those used in horse races today, made sure no one could jump the gun.

We left the stadium and passed by a number of other ruins (the Metroon, Altar of Zeus, and Nymphaeum) before coming upon the Altar of Hera, which provides a link between the original Olympics and todays modern games.  Since 1936 this is where athletes have lit the ceremonial torch.  A few months before the modern games begin, a curved cauldron-shaped mirror is used to focus the rays of the sun, igniting a flame, which is then carried into the stadium where runners light a torch and begin the long relay to the next city to host the Games. 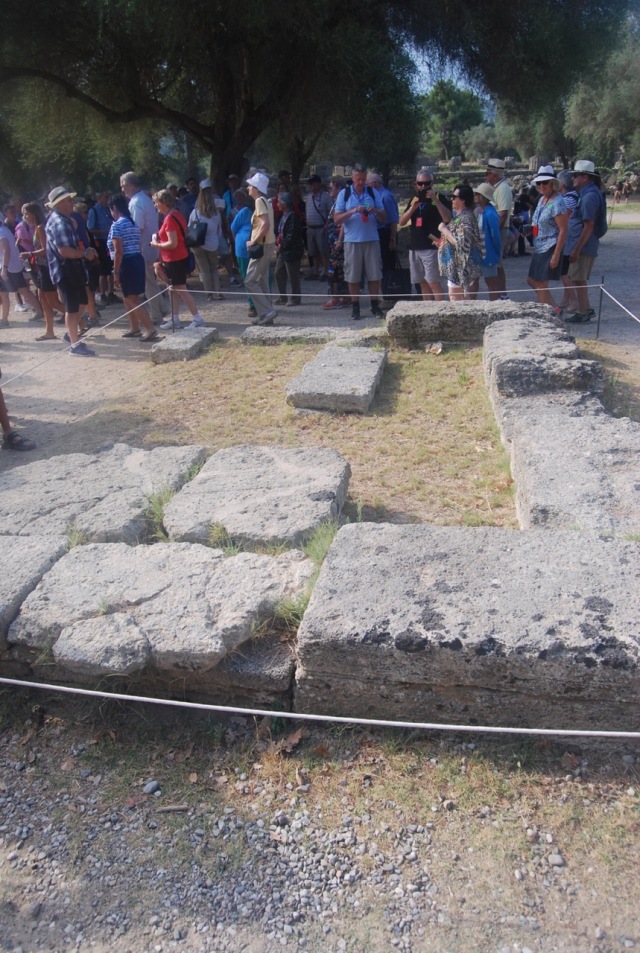 We moved past the Temple of Hera (the oldest structure on the site) to our last stop of the tour, the Philippeion, whose construction marked a new era in Greece, the Hellenistic period.  Made with Ionic columns, it was built by Philip of Macedon around 340 B.C. to mark his triumph over the Greeks.  It’s 18 original columns framed a courtyard that held statues of Philip and his family, including his son, the man who would bring Greece to its next phase of glory, Alexander the great. 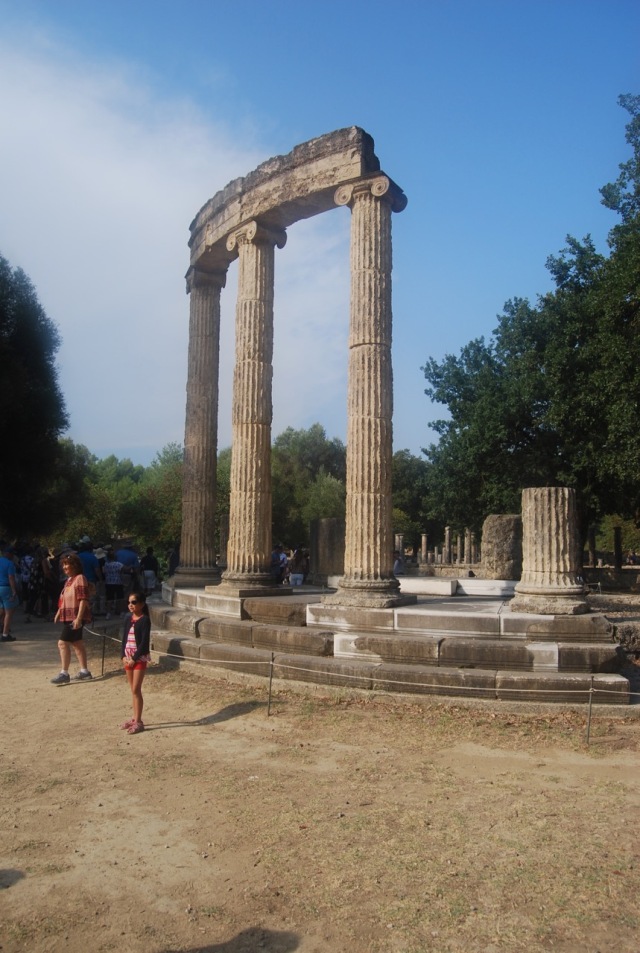 We left the Archaeological Site and after a brief break, entered its museum where we viewed statues from the East and West Pediments of the Temple of Zeus, and the highlight of the stop, the Nike of Paeonius, the statue from the top of the Pedestal of Nike.  Victory holds her billowing robe in her outstretched hand and a palm leaf in her right as she flows down from Mt. Olympus to proclaim the triumph of the Messenians (the Greek-speaking people from southwest Peloponnese) over Sparta.

Made of flawless pure-white marble from the island of Paros, it is the work of the Greek sculptor Paeonius.  It was damaged in the earthquakes of A.D. 522 and 551 and today its wings are completely missing.  But they once stretched behind and above her, making the statue 10-feet tall. 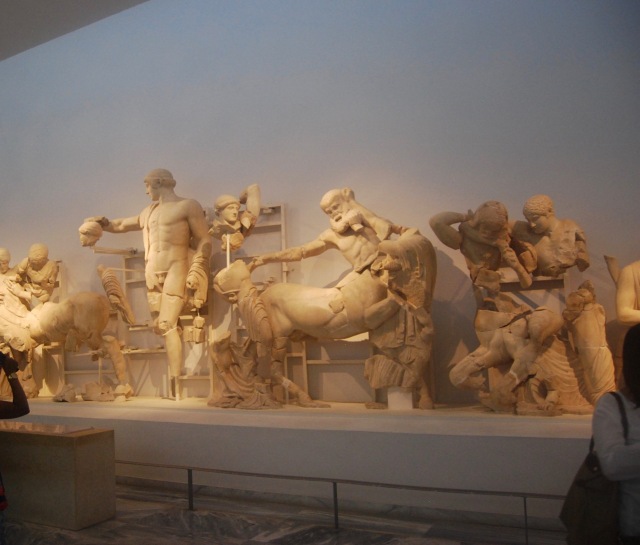 West Pediment of the Temple of Zeus

We left the museum and motored to our lunch stop for the day.  Not covered as part of the tour, we opted to not join the others as unlike the day before, when we could order from a menu, this was an all you could eat buffet for 12 euros apiece.  Not a bad price but we’d eaten so much at breakfast that we couldn’t see the value in the proposition.  While Joanna sat outside in a covered patio, I walked a couple of blocks into the nearby town to pick up something to drink and a smallish bite to eat.

We left for the three plus hour drive to Delphi, stopping for a few moments when we crossed the Corinthian Bay via the Rio–Antirrio Bridge.  At 9,449 feet in length (approximately 1.8 miles) it dramatically improved access to and from the Peloponnese, which could previously be reached only by ferry or via the isthmus of Corinth in the east.  Its five-span four-pylon cable-stayed portion of 7,388 feet is the world’s third longest cable-stayed deck; only the decks of the Jiaxing-Shaoxing Sea Bridge in Shaoxing, China and the Millau Viaduct in southern France are longer at 8,330 feet and 8,071 feet, respectively.

This bridge is widely considered to be an engineering masterpiece, owing to several solutions applied to span the difficult site. These difficulties include deep water, insecure materials for foundations, seismic activity, the probability of tsunamis, and the expansion of the Gulf of Corinth due to plate tectonics.

Ouzo – It Starts the Evening

We continued on to Delphi and to our hotel.  After we checked in I walked to a small shop to pick up a bottle of wine and small bottle of Ouzo, which had become our go-to beverage of choice for travel.  Like the French Pastis, this licorice (anise) flavored liquor is best consumed by mixing with water.  At 37.5 and 50 percent ABV, it is not as strong as higher proof drinks (whiskey, vodka, etc.) but yet packs a punch because of its sugar content. Sugar delays ethanol absorption in the stomach, and may thus mislead the drinker into thinking that they can drink more as they do not feel tipsy early on.  Then the cumulative effect of ethanol appears and the drinker becomes inebriated rather quickly.  Best consumed with food, it’s a fine way to start an evening.  And so we did. 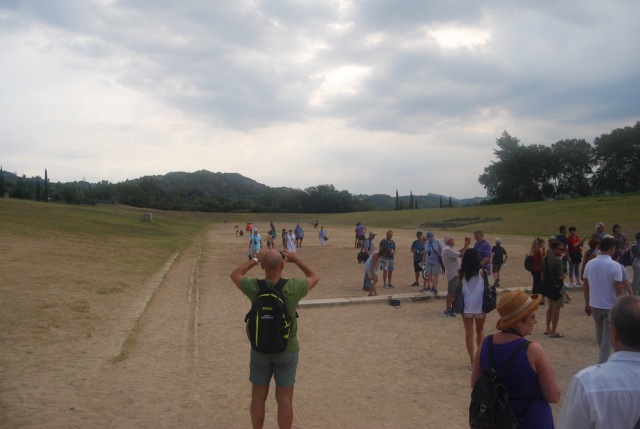 DAY 3: In the morning visit the Archaeological Site with the Sanctuary of Olympian Zeus, the Ancient Stadium and the Archaeological Museum. Then drive on through the plains of Ilia and Achaia until the magnificent bridge which is crossing the Corinthian Bay from Rion to Antirion. Pass by the picturesque towns of Nafpactos (Lepanto) and Itea, arrive in Delphi. Overnight. (B, D)