We arrived in Chania later in the afternoon and after a 10-euro taxi ride arrived at the Athina Beach Hotel, our home for the next two nights. This was a very nice property, again with a swimming pool for the rate of just 45 euros, although breakfast wasn’t included. 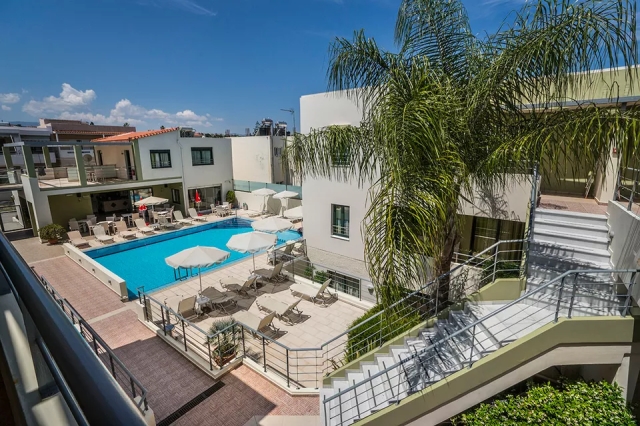 We checked in and while doing so mentioned that we planned to hike Samaria Gorge the following day and to our delight, the woman checking us in advised that they booked a tour for the phenomenal rate of just 22 euros apiece, much less expensive than we’d seen through other places. We would later on need to pay 15 euros apiece for park entrance and the ferry ride at the end of the hike, but all in all the 37 euros we paid was 40 less than others had quoted. And best of all, the pick-up location was just two blocks away.

Our Room at Athina Beach

We unpacked our bags and walked up to the main drag to check out where the pickup location was, then walked a number of blocks up and down the street checking out the shops and restaurants. The beach was a bit further away and with a long hike on the docket for the next day, we were content with just returning to the hotel and laying around the pool the rest of the afternoon. 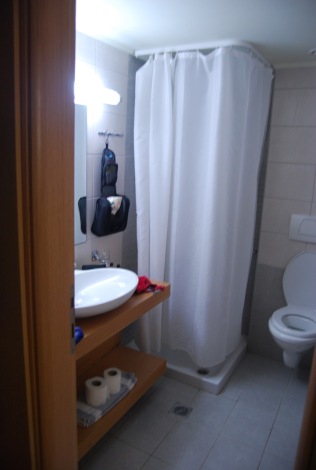 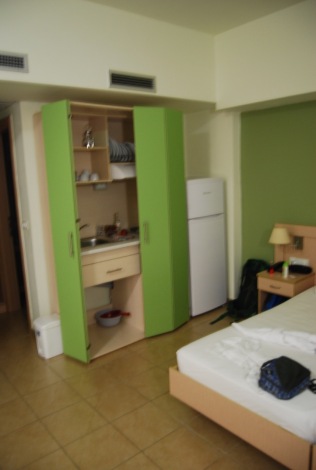 Later, not having seen compelling eating options on the main road, we walked around the block from the hotel and stopped in at Ozon for dinner. It was basic food at a decent price (20 euros including drinks), nothing more. Here is my review in Trip Advisor:

We stopped in for dinner as it was close to our hotel. My wife ordered the shrimp salad and I the Carbonara. Both were good sized portions and reasonably priced but the pasta was just OK, very thick and gummy without much flavor and the salad would have been better if the dressing had been served on the side as it was drowning in the stuff. It’s obviously a family run place with a loyal clientele, which says something for how they treat their customers. 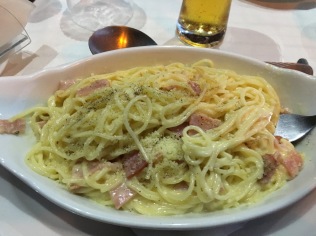 Needing to meet the bus not long after 6am the next morning, we packed our hiking gear before retiring to bed and then arose early, full of excitement for the day ahead. We walked up to the meeting place, in front of a coffee house and soon after the bus arrived. Our guide, Thomas, checked us in and as we picked up what would end up being a bus load of folks, entertained up all the way to the trail head with background information on the area, the hike, and the difficulty we would face, all in a charming accent we couldn’t quite place, possibly Dutch or Swedish. 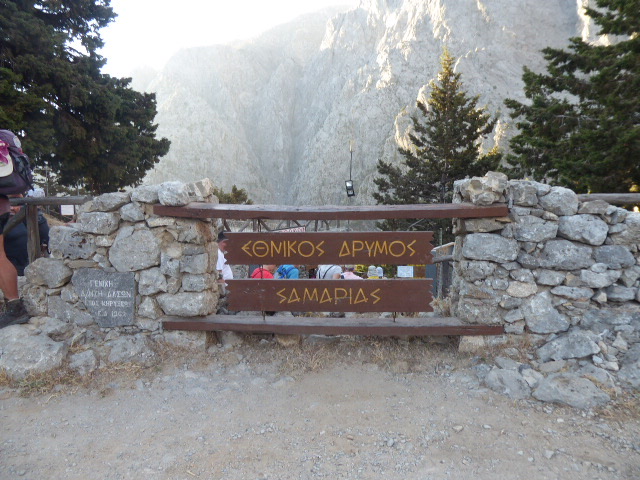 We arrived at the trailhead of the Gorge and its National Park, after a quick stop at a café to get a cup of coffee and fortifying pastry. We then gathered for last words of advice from Thomas and began our hike, which would turn out to be, honestly, one of the hardest I have ever accomplished, on par with hiking Half Dome in a day. We would walk a total of 18 kilometers (11.2 miles) and descend over 1,250 meters (4,000 feet) on a trail of broken rocks. 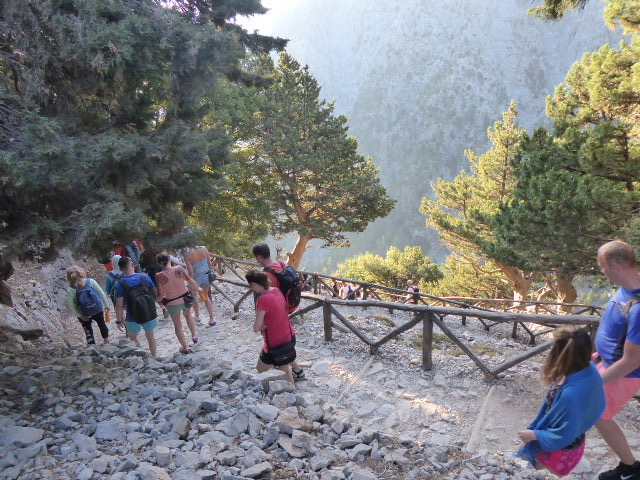 Steep at the Start

For those of you that do some hiking, you will agree that walking uphill is actually easier on your body than downhill, the muscles used to control your descent and the impact on your joints taking a toll over time.

Joanna in the Steep Section

And the uneven condition of the trail, constantly having to watch where you placed your next step, balancing from one rock to the next magnified the difficulty of the endeavor. 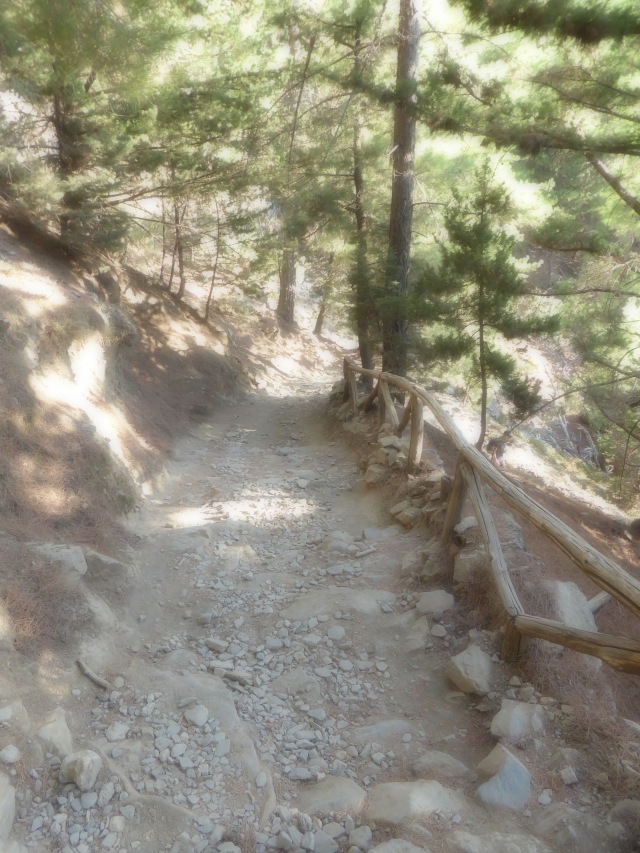 We began our descent to the floor of the gorge down an hour of steep switchbacks, where we reached a stream that signaled the beginning of eight miles of gently sloping downhill trails. 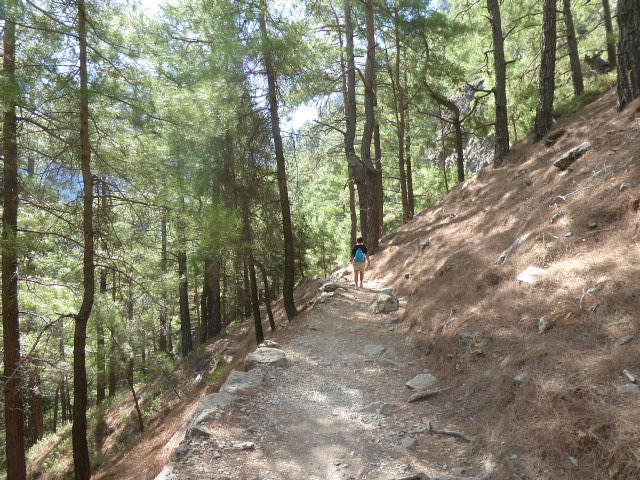 A little under halfway through the hike we came upon the village of Samaria abandoned by the last remaining inhabitants in 1962 to make way for the park. 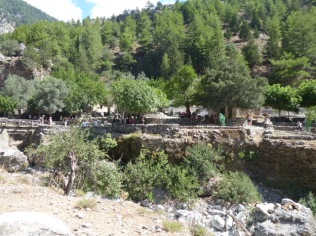 We stopped there to eat our lunch and get more water, and then set out to the middle of the hike where we came upon the Narrows, the most photographed point in the gorge, where only three yards separate the 1,000-foot-high cliffs.

Eventually we began to see signs of civilization and passing a last water stop, one we thought would leave us with about a mile to go we discovered it was the booth for the park entrance and before we knew it we’d finished the hike.

There is a bar and café of sorts at the entrance and we sat down, me with something like a liter of beer, to think about our accomplishment and begin to register those parts of the body that would hurt for the next 2-3 days.

Glad to be Done Joanna 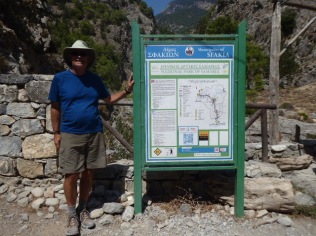 Glad to be Done Jerry

Just before we fully stiffened up, we finished our drinks and walked a quarter mile to the small town of Agia Roumeli, which is accessible only by foot or boat. We passed the restaurant, Kri Kri, where Thomas would later give us our ferry tickets for the ride to Chora Sfakion, the meeting place to join the bus for our return to Chania. We then headed down to the beach to take a dip in the bathtub-warm, crystal-clear waters of the Libyan Sea. The black-sand beach here absorbs the heat, so one must wear shoes right to the water’s edge. But it was well worth the effort.

The Beach at the End

Pretty hungry by now, we returned to Kri Kri named after the local Cretan goat that lives in the national park, which was created in part to protect this rare animal as well as many other species of flowers and birds. The food was good and basic, moussaka for Joanna and kebabs for me.

Beer at the End

At the appointed time we made our way down to the dock to board the ferry for the hour long cruise. It was nice to be out on the upper deck except it was crowded and we ended up on wooden benches, which didn’t help our comfort level.

The two-hour ride back to the hotel (we were some of the last off the bus) seemed to take forever but at least was a bit more comfortable than the benches on the ferry.

Still full from our large lunch, and really, too tired to eat, we walked down the hotel, unlocked the door, quickly made our final pre-bed preparations and slept the sleep of two very tired but happy people. We’ll not soon forget our hike down the gorge and any doubts we had about tackling the Camino de Santiago in a few weeks were erased by our accomplishment. We were good to go. 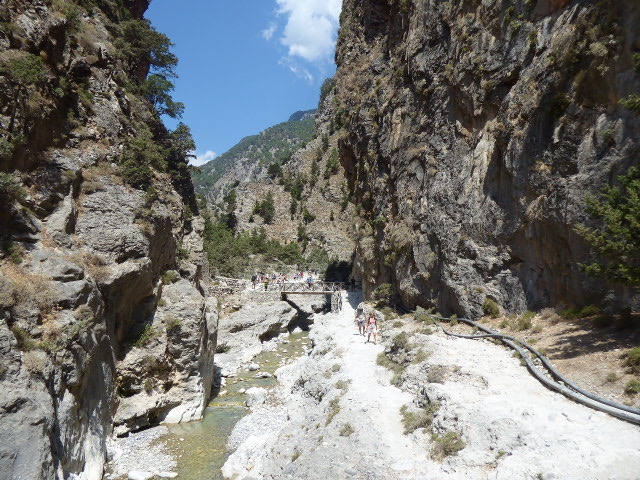 Looking Back at the Gorge 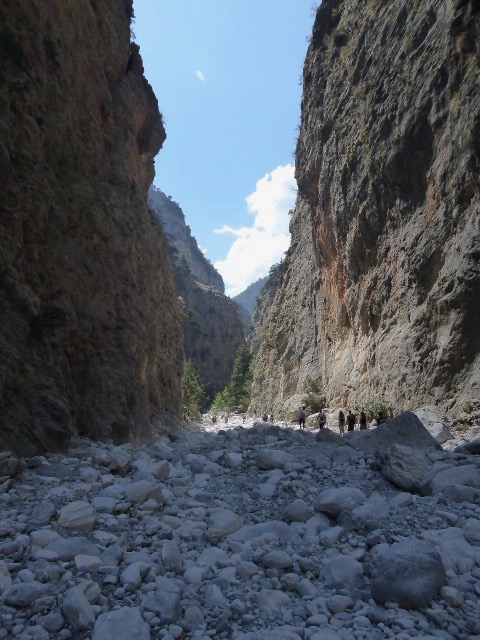 Down at the Bottom