Our flight to Marseille took just a couple of hours and after landing in Marseille and claiming our luggage, we made our way outside of the airport to find the shuttle bus that would take us to Gare de Marseille St. Charles, the main train station for the two-hour journey to Montpellier.

We’d grown so used to the wealth of spoken and written English in Greece that it was a bit of a shock when we realized we’d have to deal with logistics in French. Fortunately, our first encounter was with an automated ticket machine for the shuttle bus to the train station and as we’ve come to rely on, it had an option to display instructions in English; we purchased one-way tickets for a little under 17 euros for the two of us.

The comfortable bus got us to the train station in about 30 minutes and once there I stood in a long line before reaching a ticket seller, who fortunately spoke English and purchased our tickets for the ride to Montpellier for 63 euros. This would be the first of many train trips we take during the rest of our time in Europe, a mode of travel we would come to like very much. Almost all of our coaches had power outlets at the seats, often a dining car (simple fare, coffee, pastries, microwaveable hot food, etc.) and the convenience of being able to get up and walk around in a something other than a pressurized cabin at high altitude.

This trip represented a complete change of pace for us we only rent a car twice and then for short periods of time. This trip would begin to develop a template for us as we plan future international travel with the assumption that we will not use a car to get around. Historically we’ve relied on cars to do so as you can see by this timeline of our Europe trips:

An hour or so later we arrived at the Montpellier train station, Gare Saint-Roche, and soon thereafter located Francois. It is always a joy to see this guy. A consummate Frenchman, his love of food, music, and good times with friends is an inspiration to me. We would end up spending fifteen days with him over the course of three five-day stays and each one was memorable. 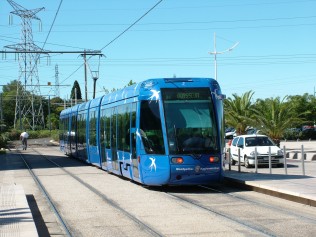 We’d use the trams extensively throughout our stay and along with walking it was how we got around town. I’d purchase a 10-ride card for 10 euros and use one punch each for Joanna and me for each leg we’d ride. This is the beauty of European (and American urban) transportation systems; relatively inexpensive modes of non-automobile-oriented ways to move around. In Montpellier they take it to another level by decorating each line’s coaches in a distinctive color and design, making them pieces of rolling art. 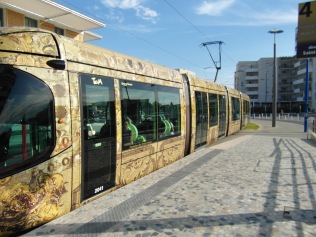 We departed the tram at the Aiguelongue stop and walked a block to the condo where we set about engaging in a routine that would be practiced with steady dedication for the balance of our stay.

At some point in the day, often in the afternoon but once or twice late in the morning, one of us, Francois or I, would ask the other if they were ready for a beer, or a Ricard (a pastis, an anise and licorice-flavored aperitif, created by Paul Ricard in 1932). And off we’d go.

Later in the day we hopped back on the tram to head into downtown, landing for the first time at what we’d soon come to think of our go-to bar in Montpellier, the Beehive. Far be it for us to insinuate that Francois gets out a lot; perhaps the multiple bar hopping and late night excursions we had with him were brought on by our visit. Then again, it seemed that at each place we went to the owners and patrons alike all greeted him with much affection. Just saying.

The Beehive Menu (Note-It’s in English)

We ordered beers, the first of many we’d have there, a good selection of Belgian’s, French, and British. Joanna and I split a very nice order of fish and chips and enjoyed watching Francois interact with the owner and other folks he knew.

We returned to the condo after walking around downtown a bit and settled in for an evening of conversation and getting caught up. A bottle of Remy VSOP materialized and a serious inroad was made on its contents.

As we tottered off to bed, we realizeed that we may just have set the tone for what would be nearly three full weeks of fun, walking, late night carousing, and seeing sights in and around Montpellier. We were off to a very good start.

Beer Taps at the Beehive