We had a cup of coffee (a welcome change from the Nescafe packaged drink we bought each night at the market) in the breakfast room at Les Nevons before departing for Avignon and the train to Montpellier.  This all went smoothly, retracing our steps and the familiar sites taking much of the anxiety out of the experience.

After dropping off the car and boarding the shuttle to the main train station, which was designed in a classical style by architect Louis Jules Bouchot and built in 1860 on the Paris-Marseille railway line, we grabbed a sandwich from the Brioche Doree in the station.  We figured it would be few hours before we got to eat again, and chances were some beer drinking would ensue once we landed in Montpellier.

Upon our arrival in Montpellier we hopped on the tram and went straight to his place to find Francois home, having returned early from a meeting had attended.  It turned out to be just in time, as predicted earlier, for our first beer of the day, one of many that would follow as we made our way to the center of town for the long-awaited and anticipated Karaoke late night at La Fabrik.  We arrived there around 7pm in order to grab a high-top table and to settle in for the evening.  After our first beer Francois and I went next door to Il Pizzaiolo to order a couple of pizzas to be delivered to us at the bar. 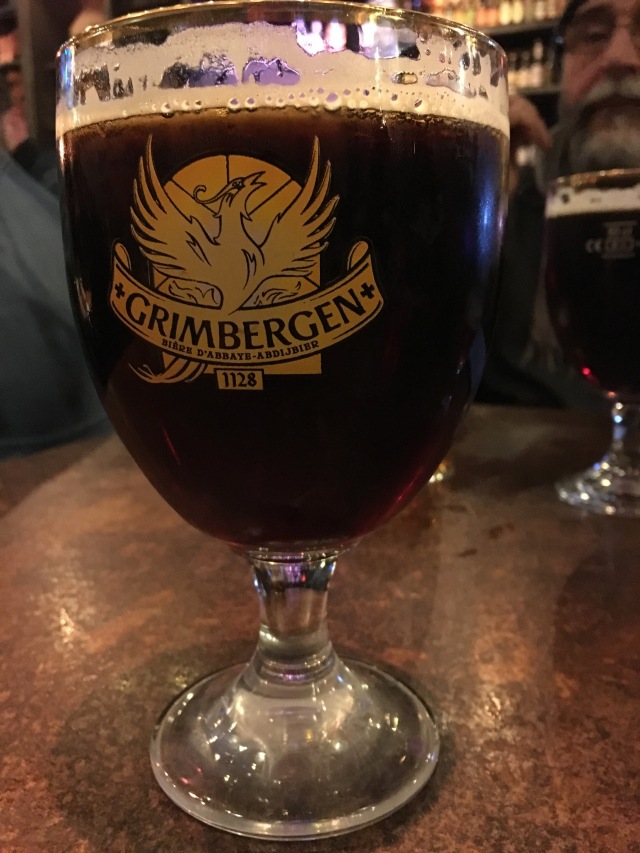 We enjoyed hanging out and listening to individuals and small groups who got up on stage and sang to the live three-piece band (the owner plays bass guitar) and as the evening wore on Francois and I finally mustered up the will (or maybe it was that we had finally had enough to drink) to put our names on the list.

View from the Stage

When my turn came around, I sang Dire Straits Money for Nothing, hoping that I didn’t embarrass myself too much.  As it was the end of the evening, the band figured I should just stay up there and sing the last number, which was Message in a Bottle by the Police.  Again, I wasn’t booed off the stage, so it must have gone OK, although without monitors one can’t really hear one’s own voice. 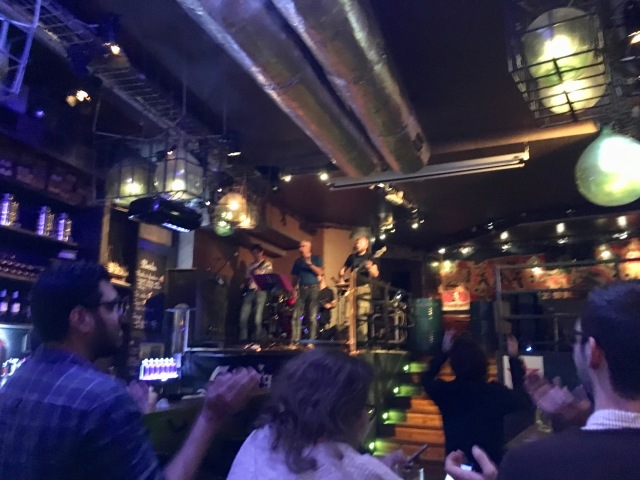 As it was quite late, we opted not to wait for the last train, instead walking back to the condo.  Although your tired and a bit tipsy, this truly is one of the best ways to walk off a night’s worth of drinking and get to bed in slightly better shape than if you’d had taken a taxi or the train.

The next day would be a quiet one, hanging out at the condo, catching up on laundry, the blog, and other assorted chores.  This left us with energy for a long day out the next morning, when we walked over to check out the Musee des Moulages at the University Paul Valéry Montpellier, an exhibit of moldings of famous statues. 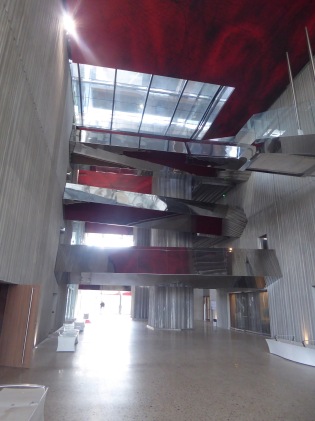 Lobby of the Medical School

The exhibit hall hadn’t opened yet when we arrived, so we detoured a mile or so away to the newly constructed Faculte de Medecine.  Construction having just been completed, the building was sparsely populated, making its breathtaking lobby area even more impressive for the lack of people.  We didn’t stay too long and walked across the street for a quick cup of coffee before returning the way we came to arrive back at the Musee for our visit.

Created in 1890 with the aim of preserving and exhibiting the collections of studies related to the teaching of Archeology (plaster prints of sculpture elements, objects antique originals, and photographic background), the museum, was installed in the 1960s in a building specially designed for this purpose, located in the heart of the new Paul Valéry University.

What I found the most interesting about the exhibit was how many of the originals we had seen of these nicely done copies.  We wondered around the hall, observing and contemplating and finally wrapped up, ready to complete our day with a final visit to a few of our favorite Montpellier drinking establishments.  Our first stop was hands down our favorite, the Beehive.

It was crowded inside, and we spent a chilly time just outside the front door, jackets zipped against the cold but savoring the last of our days with Francois.  Rarely during our extended stay with this good friend did our conversation flag, each day bringing new subjects to cover.  Later we’d head over to the Titty Twister for a last round or two before calling it a night and heading back to the condo.

Our last day was full of preparations for our bus ride to Barcelona the next morning and departure for home on the 15th.  In the early evening we all made one last trip into Montpellier’s center to attend a birthday party for the lead singer in the rock and roll band that Francois belongs to.  Our hosts lived in an updated apartment in a very old building, up multiple flights of stairs (no elevator) that would make living there a daily challenge, but says so much about living in Europe, in buildings hundreds of years old.

As with some of the parties I attended with Francois in the early 1980’s, not everyone spoke English and yet Joanna and I managed to find ways to communicate, eat quite well, and drink to our hearts content.  It was as fine a way to end our stay in Montpellier as one could hope for.

We didn’t stay out all that late given that our early bus the next day and so we made it home well before midnight.  Up the next morning we had one last big Francois breakfast and then took the tram out to the terminal for our Flix Bus ride to Barcelona.  We said our farewells quickly, it not sinking in just yet that we would not be coming back in a short time to spend time at the condo.  This time we were going for good.

For nearly 40 years, ever since that fateful meeting on the beach at Pelekas on the island of Corfu, Greece in 1979, Francois and I have been like twin sons of different mothers.  Big city natives (Paris and Los Angeles), husbands and fathers, comparable levels of education and professional experience, our friendship has provided a window into what our lives would have been like if we lived in each other’s shoes.

And the underpinning of it all has been our mutual love of music, starting with the Eagles and going from there.  In his retirement Francois has joined a band and seems to be living out the dream of exploring his music as much, if not more, than he did when we were in our twenties.  I’m looking forward to my next visit, sooner than later I hope, when I will likely catch he and the band at some Montpellier bar or night club.  Maybe they’ll need a guest back-up vocalist.  Wouldn’t that be coming full circle?