The next big portion of the trip was spent in Spain, where we took on the challenge of completing the Camino de Santiago.  What would have been approximately five weeks walking got shortened by ten days when we decided to rent bikes to finish our trek.  We used nine of them to backtrack through Astorga, Leon, and Burgos before detouring to Bilbao and Toulouse on our return to Montpellier and added three more nights in Barcelona at the end of the trip. 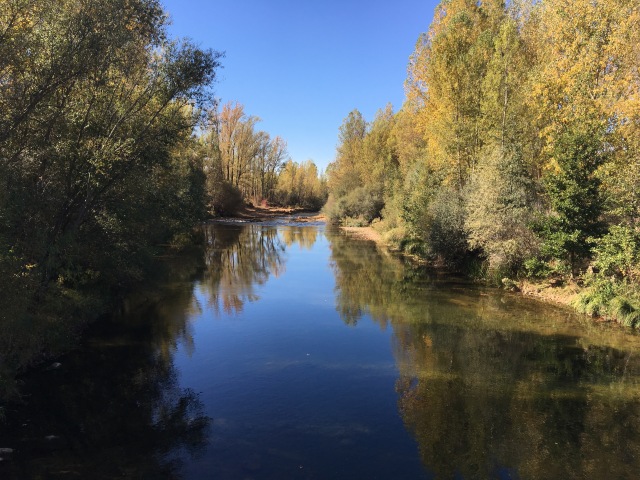 A River on the Way

All in all, we spent 36 days in Spain, about the same amount as we did in 2014.  This visit was different, as our focus was narrower, with walking and biking taking us to small towns brought to life and maintained by the many pilgrims that pass through them on the way to Santiago de Compostela. 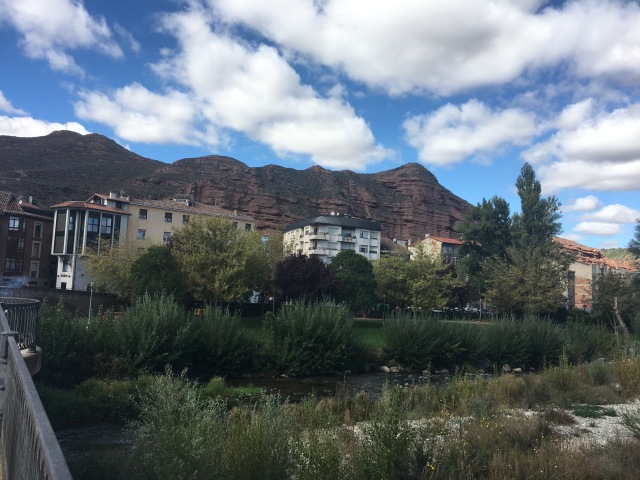 The Red Cliffs of Najera

One primary take-away from this second trip for me was how much more of the Spanish language I felt comfortable with, building on the semesters I took in high school and our time there in 2014.  I actually found myself at least thinking it as I counted (25 = Veh-een-tee-SINK-o) and that signs and menus became mostly understandable.

This segment was all about the Camino, one of the most rewarding experiences I’ve had in this lifetime.  There are challenges to overcome, mostly physical and mental, getting up each morning, body a bit sore and pushing yourself down the trail until enough time elapses each day that you’ve fallen into the rhythm of the walking or bike riding.

One of the Not So Steep Sections

The other challenge is getting out of your comfort zone and setting aside the barriers we erect around ourselves.  This is where the Alburgue part of the trip takes you, sharing your space with many others, sleeping in multi-bed rooms, becoming more comfortable with less privacy.  It makes you humble and more tolerant of others and your interactions become much more of a forgiving nature.

It’s also about overcoming adversity; for me the low point came eight days into the walking journey when my lower back began to ache constantly, sharp knifelike pain jabbing the lower right side of my body.  At Logrono I abandoned my 32-liter Osprey and walked with a daypack, shipping the gear I’d been carrying along with the other belongings we were already sending ahead. 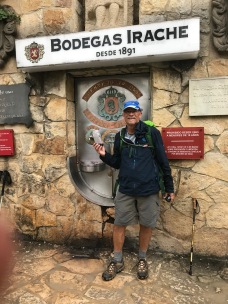 The Pause That Refreshes

Three days later, when we reached Santa Domingo on our tenth day of having walked an average of roughly twelve miles per day, Joanna and I concluded that I couldn’t go on as I’d been doing, that is walking a couple hundred yards, stopping and stretching for a count of twenty and then resuming, a ritual that slowed down our progress and actually had other pilgrims stopping and inquiring as to my health.

Joanna, Tim and I With Our Bikes

Deeply depressed as I faced the possibility of having to abandon our quest, St. James smiled on us when, after checking out the potential for renting bikes on-line, we ran into the poster for Mundi Camino at the tourist office.  One phone call to Oscar in Burgos later, we pulled out of the tail spin and saved our Camino. 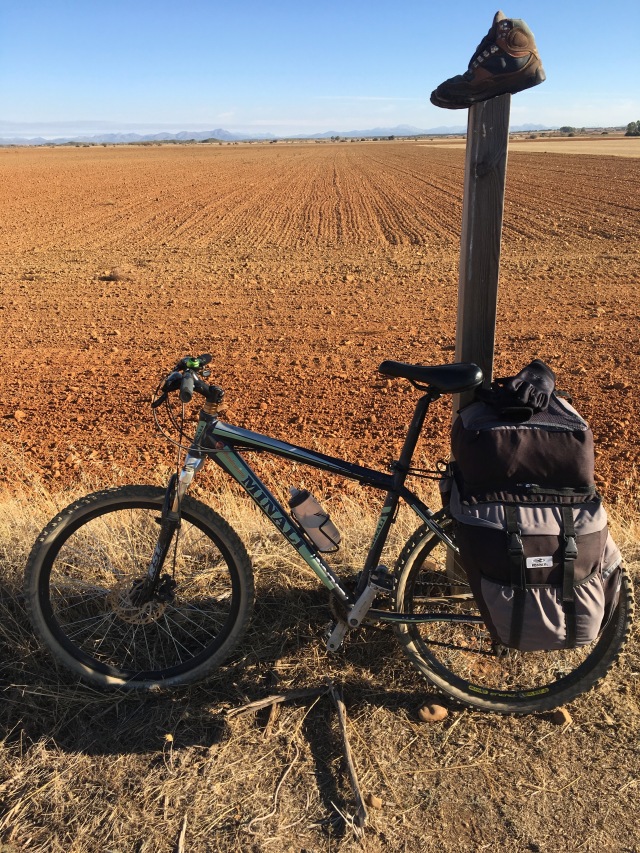 Taking a Break in the Mesete

As dedicated cyclists at home, this unexpected development provided great benefits.  We essentially got the best of both worlds, hiking a portion of the Camino and biking the rest.  It also saved us ten days of hiking time which we were able to re-purpose after we reached Santiago de Compostela by taking our time returning to Montpellier.  The only real downside of the cycling portion was that we were not prepared for it from a clothing and equipment perspective.  If prior to the trip one would have mentioned to me that I’d ride 300 plus miles wearing non-cycling clothes (pants and underwear, hiking boots, etc.) I’d question their sanity. 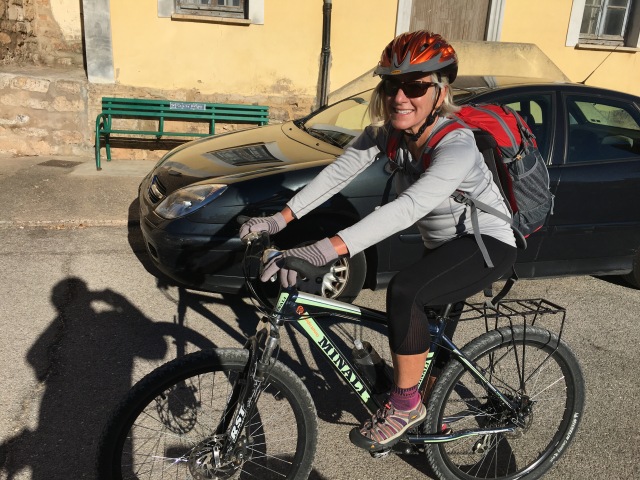 Joanna in Her Civlian Clothes

We quickly overcame the clothing issue (one can indeed ride in civilian clothes) which left us with one true drawback; our maps were all based on hiking and this would become a problem for us the last few days of the trek when we ended up cycling on single track, highly technical trails crowded with the hordes of hikers who only traverse the last 100 kilometers out of Sarria.  With good maps we would have simply taken a nearby paved road and saved ourselves a ton of grief. 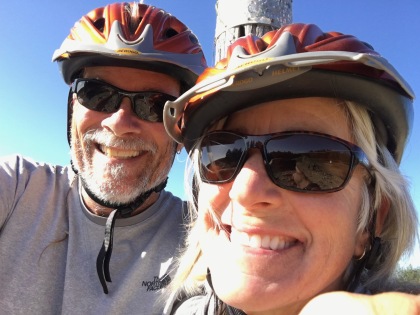 J and J at Cruz Ferro 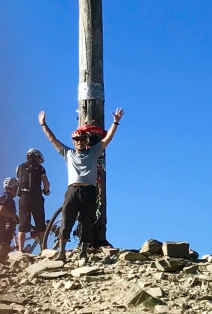 Made it to the Top at Cruz Ferro

And lest one think that riding would be easier physically, that was the case during the flat stretches of the Meseta between Burgos and Astorga, but once we hit the Galician mountains and the two significant passes at Ponferrada and Cebreiro, our days of thinking we were getting away with something were over.

O Cebreiro on the Horizon

We (actually, I did) also over committed on the schedule and were forced to ride the last two days, making for ten in a row, when we should have taken a rest day.  Joanna suffered the most for this, particularly on that day out of Sarria where we lost significant time on the single track and then due to a lack of awareness about the course, passed through the town where we should have stopped for lunch, riding another hard fifteen miles before we finally found food.

But when we arrived in Santiago two days later, found the hotel, checked in, dropped off the bikes, took delight in the very nice room we’d booked, and procured a cold bottle of Spanish sparkling wine, we could truly celebrate a hard but rewarding journey’s end.  And just meaningful as our finish in Santiago was the close out of the trip in Barcelona. 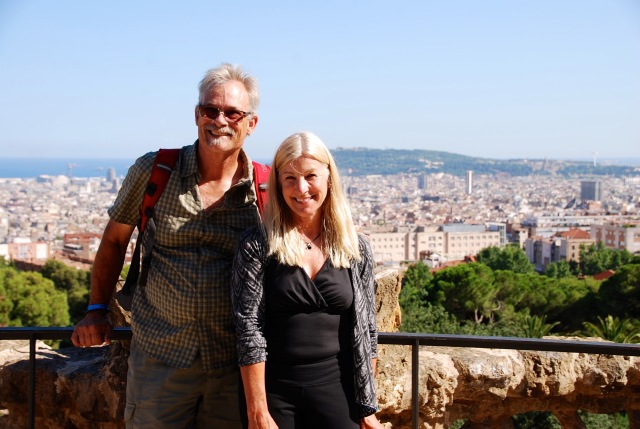 J and J in Barcelona

This city enchants us; perhaps because it is a port town, but it goes beyond that, supplying a mixture of urban density mellowed by excellent aesthetics.  With an abundance of historical and cultural artifacts, awesome food and music, Barcelona is just about as romantic as Paris.

It is blessed with great weather, discoverable on foot, has superb modern architecture, a rich history, and of course, those superb and affordable Spanish wines.  And so, as we prepared to return home in the back of our minds was the lingering thought that we might just return here some day for an extended stay.  Who knows what the future might bring? 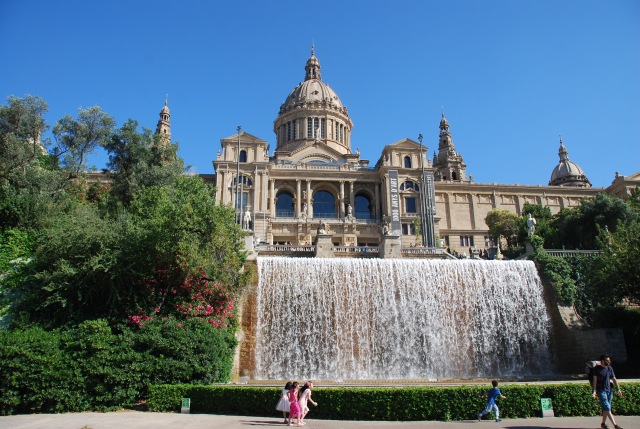 I walk with the Camino in me each day now, tempted to greet those I see by saying Buen (or Buon) Camino and find I’m still slow to get irritated, forgiving of behavior that would have bugged me before.  I miss the simplicity of the quest, where each day had a set goal that once accomplished was rewarded with good food and fine wine and can appreciate why many in our Camino group in Charlotte are hooked on it, some having done different variations multiple times.  For now I’ll be content to re-visit each day in my memory, but will keep my hiking shoes right by the door just in case someone suggests a short trek along The Way.