After breakfast in camp we drove back into Santa Fe, this time parking in one of the multi-story public garages for a fairly reasonable $11 for the whole day.  With a few minutes to kill before the start of the tour and is our habit, we sought out coffee and a snack (a tourist must stay hydrated and ready for action) at 35-Degrees North, a cool little coffee house just off the square.

We split a large vanilla latte and tasty scone, which would provide us with all of the fuel we would need for the next couple of hours of walking and then joined our tour group.  The guide, a woman about our age, proved to be very knowledgeable about Santa Fe today and its history.  We wouldn’t actually wander that far, spending a goodly amount of time near the main square as she filled us in on the major events that shaped Santa Fe and brought us up to date on its current state.

She spoke of the two different, but seemingly similar building styles that made up the Museum of Art and the Palace of the Governors, one an original adobe covered over and the other, a new construction (1917) made to look old.  As we walked past the arcade she gave us details about the artists there (mentioned in the last post) and then moved on to Sena Plaza.

The Museum of Art

The property here was granted to Spanish Army Captain Arias de Quiros in 1693 to honor his service in the 1692 reconquest of New Mexico.  In 1776, prosperous merchant Don Juan Sena and his wife inherited the property and built a modest adobe home on the site. 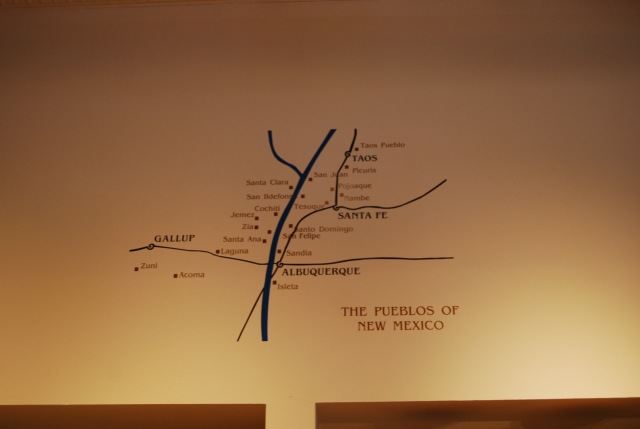 The Pueblos of Santa Fe

In the 1830’s Sena and his son, Captain Don Jose Sena, began to expand the structure.  The resulting thirty-three room Territorial-style house accommodated the Captain, his wife, their twenty-two children and various members of their large extended family. 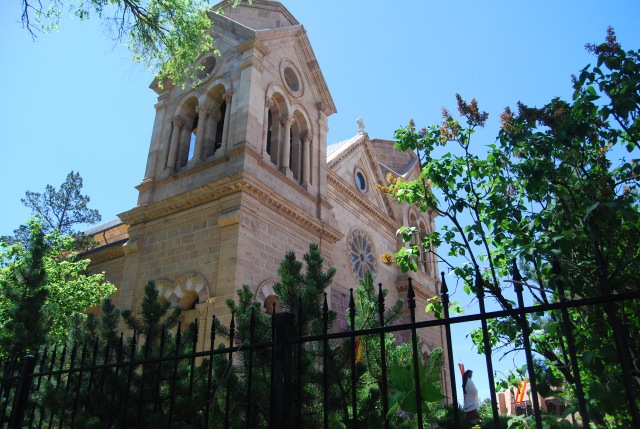 We made another stop at the Basilica of St. Francis and then finished our tour at the famous Loretto Chapel.  A former Roman Catholic church that is now used as a museum and a wedding chapel, it is known for its unusual helix-shaped spiral staircase, the “Miraculous Stair”.  The name and origin of the builder have still not been verified and the Sisters of Loretto at the time credited St. Joseph with its construction.

The Baptismal at St. Francis

The staircase was built sometime between 1877 and 1881.  By this point the chapel was substantially complete but still lacking access to the choir loft, possibly due to the unexpected death of the architect, Projectus Mouly, in 1879.  According to the version of events passed down by the Sisters, multiple builders were consulted but were not able to find a workable solution due to the confined quarters. 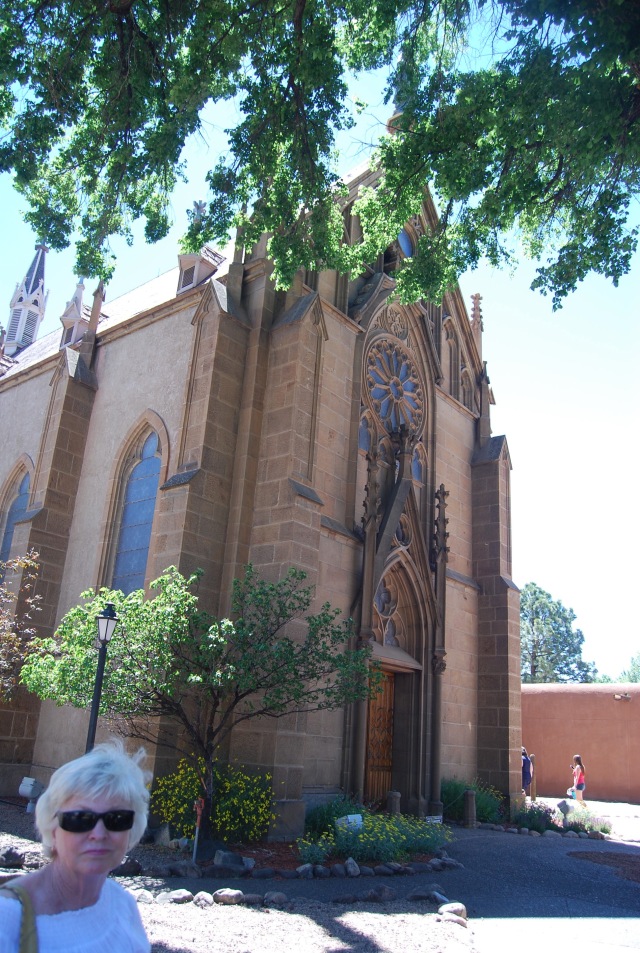 In response the nuns prayed for nine straight days to St. Joseph, the patron saint of carpenters.  On the last day of the novena, a mysterious stranger appeared and offered to build the staircase.  He worked in seclusion using only a few simple hand tools and disappeared afterwards without the Sisters learning his identity.

In any event, the finished staircase was an impressive work of carpentry, seeming to defy physics as it ascends 20 feet without any obvious means of support. The Sisters of Loretto viewed its construction as a miracle and believed that the mysterious builder must have been St. Joseph himself.

Finished with the tour, we walked a couple of blocks to the New Mexico State Capital Building to take a look not only at its legislative chambers, but at the extensive art collection that lines the walls of the building.  It is the only round state capitol in the United States and is known informally as “the Roundhouse”. 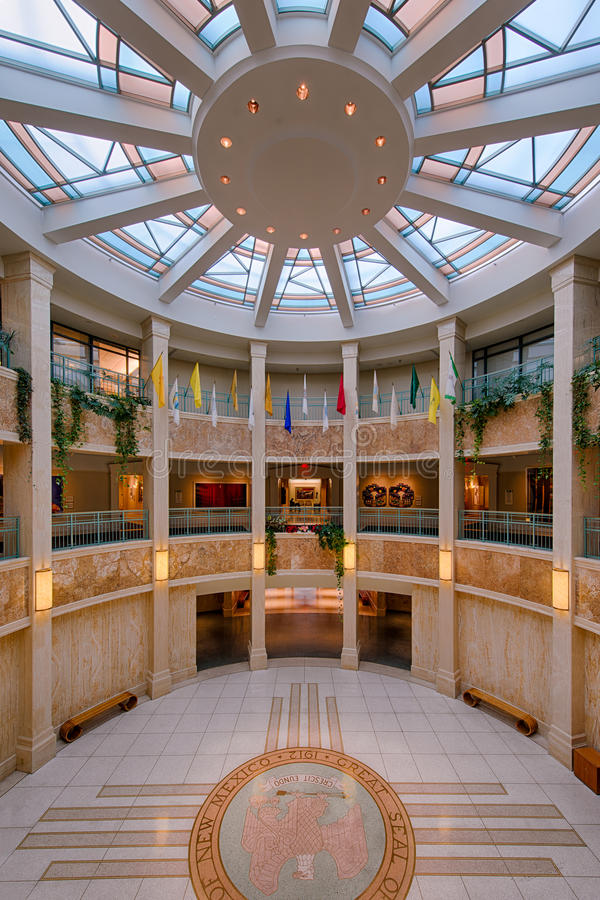 Dedicated on December 8, 1966, it designed to resemble the Zia Sun Symbol when viewed from above, with four entrance wings that protrude from the main cylindrical volume.  Architecturally, the Capitol is a blend of New Mexico Territorial Revival style and neoclassical influences.  Above each entrance is a stone carving of the State Seal of New Mexico.

One of the Chambers

After walking the entire interior perimeter and viewing all of the ground level art (all four floors of the building also contain art as well), we hopped on one of the city’s free shuttles to navigate to Canyon Road for lunch as Santa Fe’s oldest bar, El Farol.

Operating continuously since 1835, this historic restaurant, with its uneven floors and hacienda like motif, knocked us out as soon as we were seated outside on the small veranda facing the street.

It being slightly after noon, meaning cocktail hour somewhere, Joanna ordered a house margarita and I a Santa Fe Pilsner along with an El Farol Grilled Cheese Sandwich (Cheddar Cheese, Pan Rustico, Piquillo Peppers, Smoked Paprika Aioli, Bacon, and Avocado) with fries to split.  The sandwich was outstanding, the fries nearly perfect and we could think of no better way to while away an hour or so, basking in the dry warmth of a lovely Santa Fe afternoon.

We walked the length of Canyon Road back towards the main square where I purchased a nice bracelet from one of the arcade artists, then picked up the car to drive just a few blocks to Santa Fe Spirits to sample some of this distillery’s products.  As it was happy hour, instead of trying a sampling of their various spirits, we each ordered a cocktail, Joanna a Gin and Tonic and I a Bloody Mary. 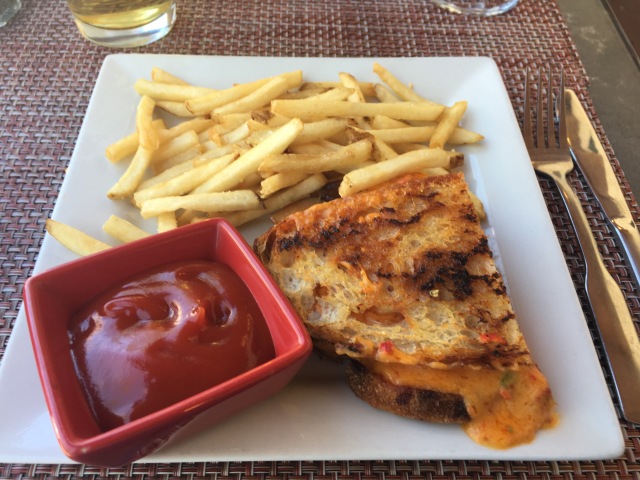 One Half of a Grilled Cheese

Both were good, but the house made tonic had a distinct flavor that tended to distract from the gin itself, not necessarily a good thing if you are trying to highlight the unique qualities of your product.  We like their Wheeler’s gin well enough to buy a bottle to take with us to Henderson for Marty, who favors this liquor among the many he enjoys from time to time.

Finished with our tourist activities for the day, we stopped at a Trader Joe’s on the way out of town to pick up a bagged salad for a simple dinner in camp and once there, ate and repaired to the campground game room to work on the blog and charge our devices.

It had been a full and rewarding day in town featuring all of the tourists ingredients we like; a walking tour, sites of interest, good food, and a relaxing evening.  We’d take a break from Santa Fe the following day and head up to Los Alamos to tour the town and museum there.  Except for my knee issues, we felt as if the trip had really started.

A Girl and Her Horse Head