We arrived at Lonnie and Steve’s house and while seated on their backyard patio Uncle Chuck and Aunt Chong made their appearance.  This was our first-time meeting Steve and afterwards found ourselves sorry that we’d not had the chance to do so earlier in he and Lonnie’s long marriage.

As for Chuck and Chong, it had been some time since we’d last seen them, many years prior at a reunion in Las Vegas, he and my Uncle Dick now the last surviving members of my Dad’s family with Aunt Shirley’s passing in 2016.  Uncle Chuck is retired from the Air Force and with Chung played a central role in my first trip to Europe in 2007.

Laker Airways to London in 1979

At that time, they (He, Chong, and Lonnie) lived in Birkenfeld, Germany while he was stationed not far away at the Air Base in Baumholder.  Through him I purchased a one-way airfare through Davis Charters from New York to Frankfurt (I would return to the U.S. three months later, flying Laker Airways from London to New York for $99).  We used this method as this was pre-deregulation of the airline industry, and about the only way you could get a cheap fare was through various charter companies.  Thus I used Davis as they served the military.

They lived in a two-bedroom apartment, surrounded by farms as in all small towns in Germany, and they graciously let me use Lonnie’s bedroom for the week I stayed with them.  Reluctant to immediately start hitch hiking, I’d take a long train ride down to Florence to start the Europe part of my journey as I’d already been on the road three weeks or so, riding on Continental Trailways buses from Los Angeles to Urbana, Ohio (Grandma Cuba’s), to Clarksburg, WV (Grandpa Charlie’s) before taking an overnighter to JFK. 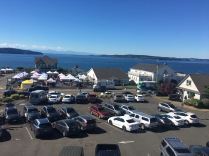 After a month hitchhiking in Italy, I’d turn up lame (an ingrown toenail that would plague me for years) and return to their place by train from Innsbruck.  Their continuing hospitality, although a burden on them, proved their generosity to family and I’ve always appreciated it, never really getting to thank them properly for it.  Someday I will. 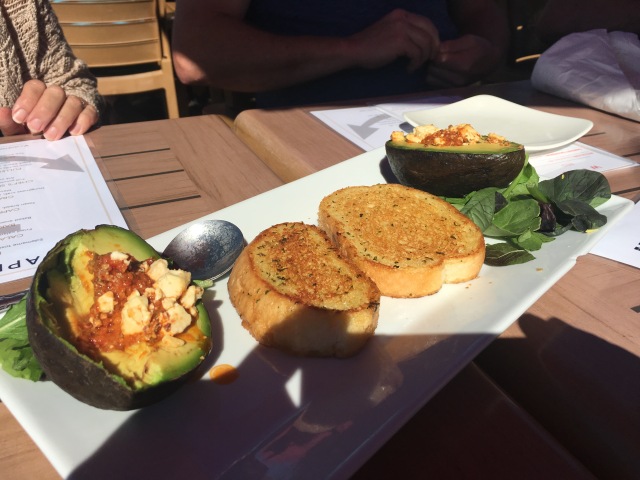 After a beer or so on the back patio we drove to downtown Steilacoom to get a bite to eat at one of their favorite places, Topside Bar and Grill.  We waited a short while at the inside bar before being seated outside on the deck with its great views of the sound and the Anderson Island Bridge.

The tacos were perfect, simply built, the salsa and aioli complementing the fish, not overwhelming it, letting its quality shine through.

Music on the Sound

After eating we walked down to the waterfront to listen to a jazz quartet featured as part of a regular series of open-air concerts, then walked back to the cars and bade farewell to these folks we see so rarely, but who we will make a concentrated effort to spend more time with in the future.

We returned to the welcoming environment of our garden suite and prepared for the next day, when we would venture onto Seattle’s King County Metro Transit system to see if we could use it effectively.  As it would play out, even after years of navigating systems the world over, we managed to make every rookie mistake in the book.

We took the local bus towards the University in order to transfer to the Link Light Rail but missed our stop and had to walk some distance to get to the rail station.  Our plan was to exit at the Westlake Station and walk up to REI’s Flagship store on Yale Avenue to return some socks and then walk back down to the Pike Place Market for full immersion into the tourist side of Seattle.

Of course, we overshot our station and departed at the Pioneer Square stop, where we found ourselves in a sketchy part of town, throngs of the homeless and down and out congregating in front of a half-way house.  The upside was that being hungry, we happened upon Flame Café where we had a very good breakfast wrap and large coffee for $7.61, fortifying us for our return on the light rail to our intended station.

We alighted at 4th and Pine and walked the mile or so up to REI, passing food trucks with lines of workers queued up for their lunchtime fix.  When you arrive, the store is a marvel, truly worthy of being called the flagship. 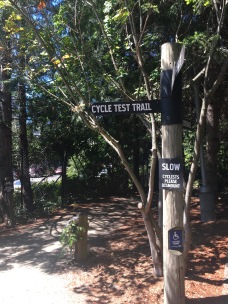 We returned by foot to Pike Place Market, stopping outside to grab a cold glass of fresh squeezed lemonade before entering the madness of the ground floor of the complex.  Overlooking the Elliott Bay waterfront it opened in 1907 and is one of the oldest continuously operated public farmers’ markets in the United States.

Named after the central street, Pike Place it has more than 10 million visitors annually, making it Seattle’s most popular tourist destination and the 33rd most visited tourist attraction in the world. 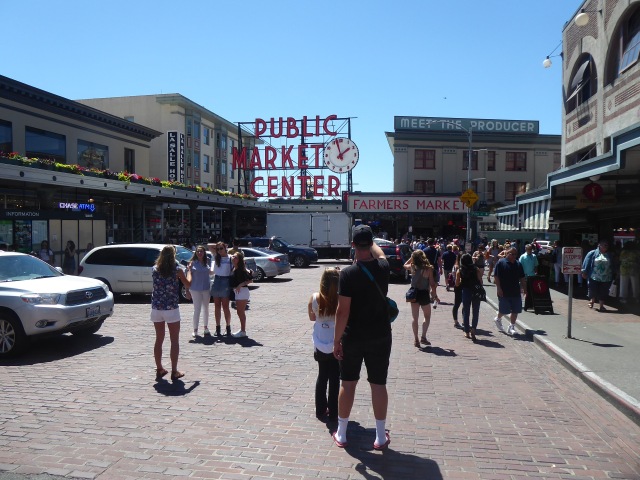 Built on the edge of a steep hill, it consists of several lower levels located below the main level, each featuring a variety of unique shops such as antique dealers, comic book and collectible shops, small family-owned restaurants, and one of the oldest head shops in Seattle. 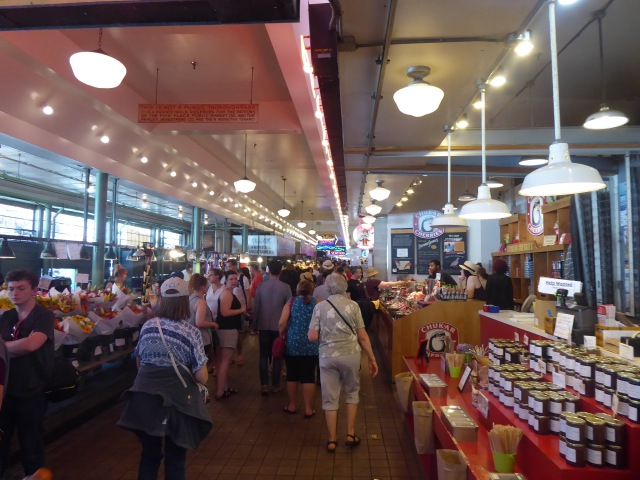 Madness of the Main Level

The upper street level contains fishmongers (including Pike Place Fish, famous for staff throwing fish to each other), fresh produce stands and craft stalls operated by local farmers and craftspeople year round from tables they rent from the Market on a daily basis, in accordance with the Market’s mission and founding goal: allowing consumers to “Meet the Producer”.

On the way back to the light rail station we stopped in at highly rated Shug’s Soda Fountain for a soda to gird us for the trek back to Hawthorne Hills.  Featuring house-made syrups, sauces and toppings, Lopez Island Creamery small-batch and independent Ice Cream (we’d eat a ton of this once we hit the San Juan Islands) our hand-built coffee and chocolate ice cream soda was exactly what we needed.

As we exited the light rail station at Husky Stadium, Joanna and I went our separate ways, she to head up to University Village to look for clothes she could consider not buying, while I took the bus back to Princeton NE and Sand Pointe Way NE to walk the couple of blocks up hill to the house.  In doing so I crossed over the Burke-Gilman Trail, which we’d ride the next day, looking forward to an opportunity to get out on the bikes. 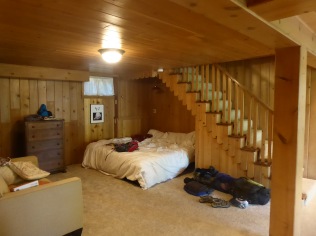 When you spend us much time together as Joanna and I do when on these trips, these short interludes of separateness are refreshing, making you realize just how much you rely on the other person and in the end, how pleasant they are to be around.  We would set off later to meet up with our friend Lincoln for dinner.  But that too is a tale for another post.