Leaving English Camp, we continued south onto West Side Road, stopping briefly at one of a number of Alpaca Farms, the animals having been recently shaved to harvest their wool and keep them cool in the summer heat. 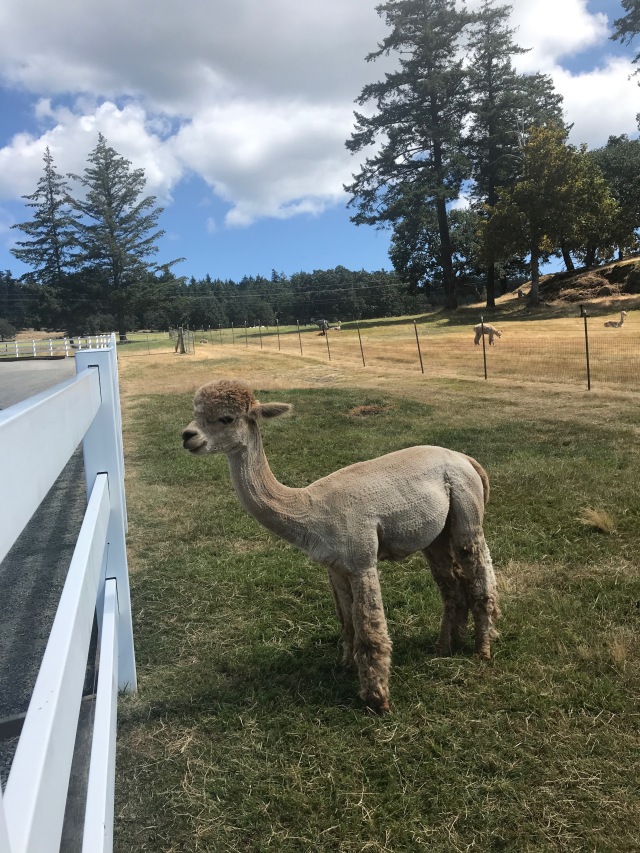 At the Alpaca Ranch

Not long after that we arrived at Lime Kiln Point State Park, a 42-acre Washington state park that is considered one of the best places in the world to view wild orcas.  Due to the unique bathymetric properties of the site, visitors on the shore can be within 20 feet of whales jumping out of the water (breaching and spy hopping).

When we checked in with one of the rangers, they advised us that no whales were currently in the area, but it was anticipated that a pod might be passing through in the next couple of hours.  We hiked out to the lighthouse built in 1919 and marveled at the gorgeous views available as we watched a group of kayaker’s paddling by. 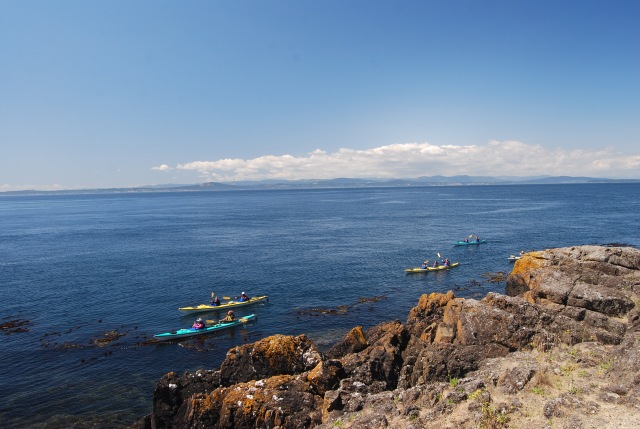 We walked out past the lighthouse to the restored lime kiln, one of many that operated beginning in 1860, and then a bit further to the boundaries of the park before returning to the lighthouse and then a picnic table near the parking lot to enjoy the sandwiches we had made for lunch.  With more to see that day we felt we couldn’t wait around for a potential sighting of Orcas and thus moved along down the road. 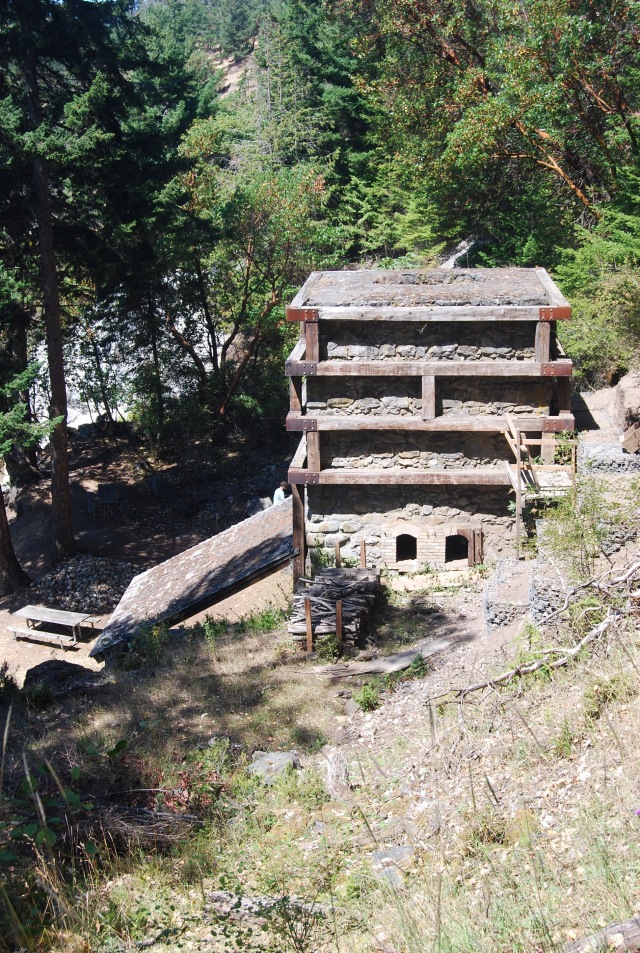 Westside Road becomes Bailer Road as you proceed south and east and then we jogged onto Cattle Point Road which took us to the American Camp.  We parked outside of the Visitor Center and after spending some time looking at the displays there, walked out to the parade ground and the restored Officers Quarters. 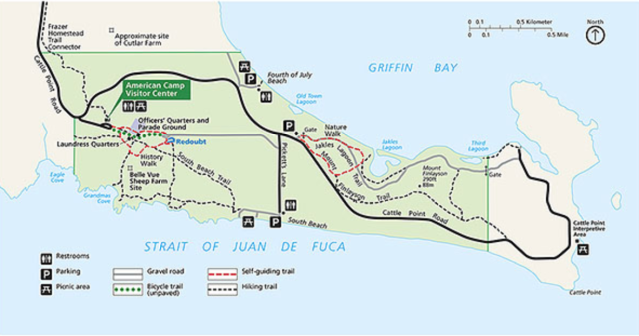 Like at English Camp, this property had been used as a ranch after it was abandoned by the U.S. Army and thus not much of the original structures stand.  Also, this camp was not as well constructed as the British one, leaving little to preserve.  With a simple map at hand but few discernable landmarks and poorly marked trails, we managed to get lost as we tried to walk out to Grandma’s Cove.

After walking in circles for a period of time, we decided to throw in the towel and head to our last couple of destinations on the way out to the tip of the island.  Our first stop was on Pickett’s Lane at South Beach.  The ranger at the Visitor Center had informed us that foxes had been sighted there and if lucky, we could spot them. 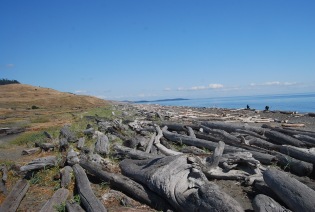 Much like with our earlier quest to view Orcas, this would not come to pass but it was a worthwhile stop given the wild conditions on the beach, driftwood piled up and down its length. 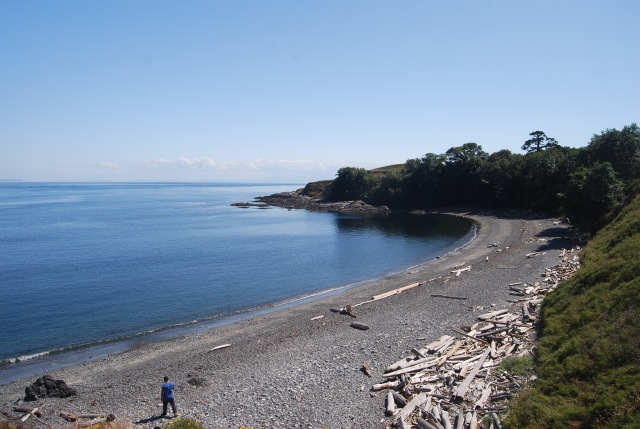 A Bay at Cattle Point

Our last stop was a small bay at the end of the road; the other lighthouse on the island also sits here but we decided to pass on walking out to it, instead enjoying the view across the water to the town of Friday Harbor.

Looking Out at Friday Harbor

Done with our labors for the day, we made our way into town for a much anticipated visit to San Juan Island Brewing for some beers and food.  A new looking facility with clean lines, the interior is large and spacious with tall ceilings.

Seated at a high-top table off the side of the bar, we had arrived just in time to take advantage of happy hour pricing, starting with a Rye Lager, Vienna Lager and the Ahi Poke served with fried wonton and cucumber-sesame salad, to whet our appetites. 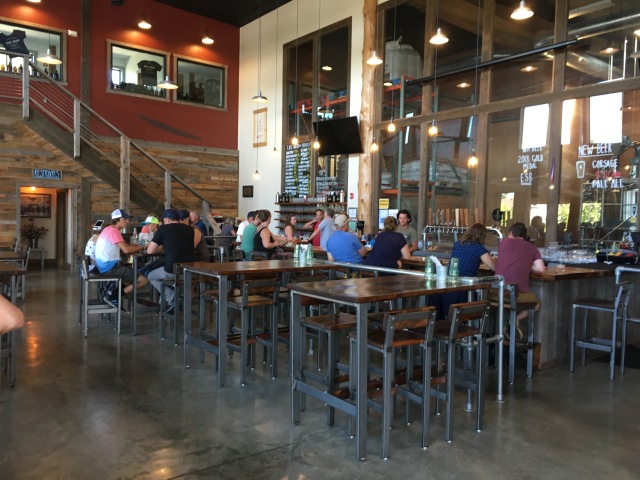 Our friendly waiter kept up a flow of conversation as we finished our first round and ordered the American Camp Pizza (Homemade BBQ sauce, shredded pork, red onion, mozzarella-provolone, and cilantro), seasonal Belgian for me and Black Bear Porter (notes of chocolate and coffee) for Joanna.

It was a great way to finish a long and satisfying day of sightseeing and returning to camp, we sat in our chairs watching a large group of families play a wild grown-up’s and kids’ game of slow pitch baseball.  It was obvious that this group gathered every year, camping here to share memories and create new ones.  We envied them in that task.

The next morning, we broke camp and drove in to Friday Harbor with time to kill, the ferry not sailing for Orcas until early afternoon.  The first order of business was to hit the town laundry mart to run a couple of loads and take advantage of the weekly farmers market next door. 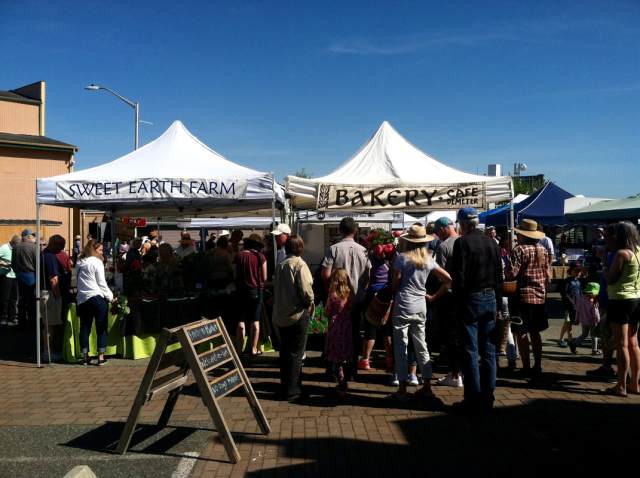 While Joanna sampled items from the various booths I walked a couple of storefronts down the street to Café Demeter for a latte and chocolate croissant and the ability to sit indoors next to a power outlet to charge the laptop and work on the blog.

Hard to Make a Choice

These brief moments of refuge make a big difference when one is in the middle of a long string of days and nights of camping.  For us, starting in Victoria, it would be twelve straight, easy to get used to and yet, hard to keep up with the usual demands of researching future activities on the trip, working on the blog, and keeping our personal finances in order. 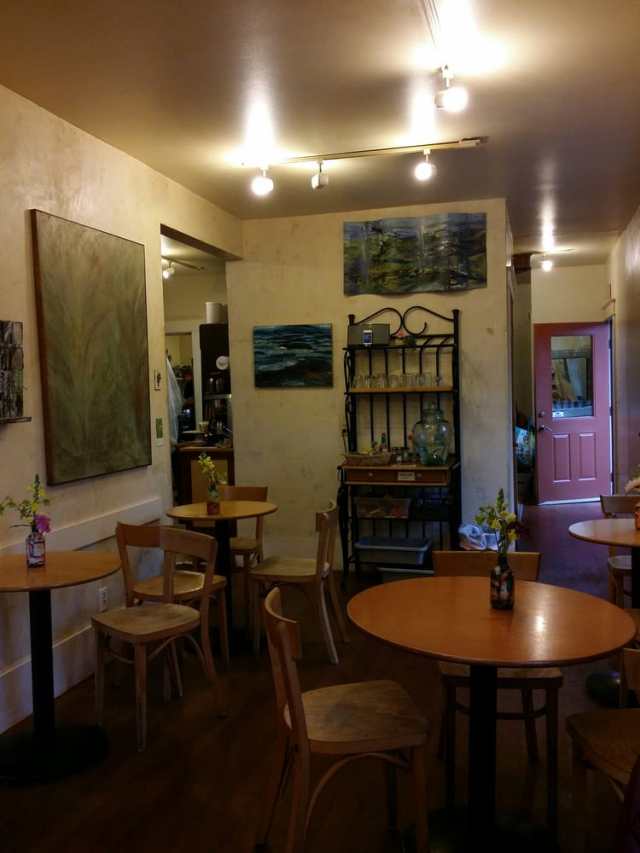 View from my Table at Cafe Demeter

This is a primary difference between camping in the States and in Europe.  Here campgrounds tend to be rural back to nature type experiences with limited, if any, indoor amenities, with the exception of many of the KOA’s we’ve stayed in.  In Europe, most campgrounds feature a small market, indoor and outdoor common areas, and free Wi-Fi (not always the best quality but at least they have it). 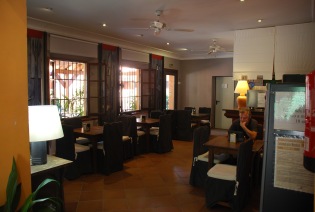 The Lounge in the Dordogne

When one travels for extended periods like we do, the need to spend some of it taking care of those daily personal tasks we take for granted at home becomes an imperative.  Thus, the value of a warm and cozy table, a good cup of coffee at your side, reliable power source and decent Wi-Fi cannot be underrated.  And then before you know it, the time comes to pack up your gear, get in the car and find the lane at the ferry for Orcas.  We will see you there in the next post.

Driving Down West Side Road