We continued on to Jenny Lake, stopping at an overlook that afforded many shots of the lake with the range in the background.  At these crowded spots, it sometimes takes many moments to get a clear picture without any other tourists in the frame.  It’s the price one pays for traveling during a peak season.

Jenny Lake from the Viewpoint

We finished up at the overlook and drove down to the Jenny Lake Visitor Center to check into taking the shuttle across the lake to Inspiration Point for a three-plus mile hike back around the shoreline to the car.

J and J at Jenny Lake

The area around the Visitor Center is undergoing improvements and for now it is located in a double wide trailer, where we stopped to get information about the shuttle, being advised of the rate and where it was located, out back of the lot where we had parked.  We returned to the car to get our hiking gear together and made our way to the dock, bought our one-way tickets and boarded the shuttle.

It was a stunningly gorgeous day out with the exception of the smoky skies, with moderate temperatures, still warm enough for shorts although I was wearing my lightweight Ex-Officio travel pants due to the cold starts in the morning, and little or no humidity.  As a west coast native, I find that muggy conditions are a weather condition I could easily do without. 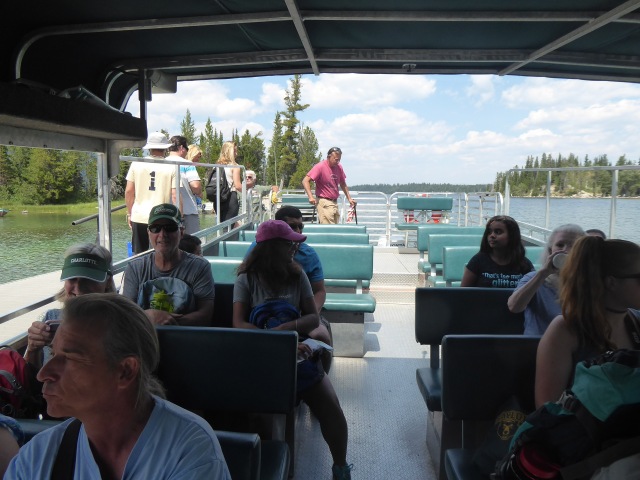 Arriving at the West Shore Boat Dock, we started towards Inspiration Point and Hidden Falls, knowing that would not be our eventual destination as the trail was closed due to “expanding cracks and fissures have been identified in a large rock buttress above the Hidden Falls viewing area.” 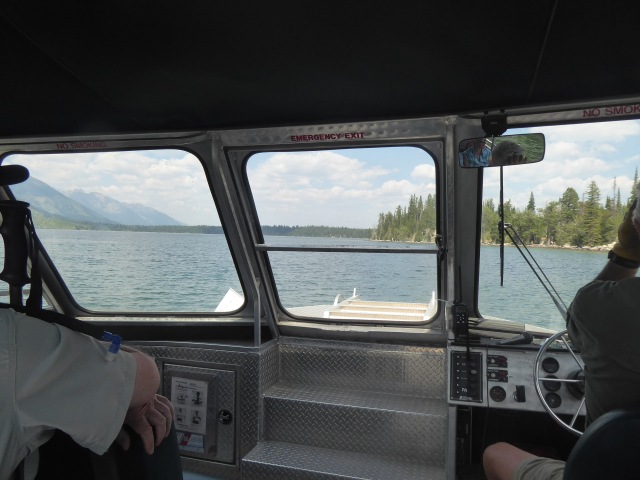 The trail would re-open a few days after our departure when Park staff and subject matter experts completed a risk assessment and concluded that rockfall, if it did occur, would be unlikely to reach the Hidden Falls Viewing Area due to distance and terrain.

So, we continued on to Cascade Canyon and the its namesake creek,

then kept on hiking south and east around the edge of the lake, for what seemed much longer than the posted mileage, stopping now and then to take a picture, each one different depending on the elevation, the angle of the sun, or the position of the ridge in the background. 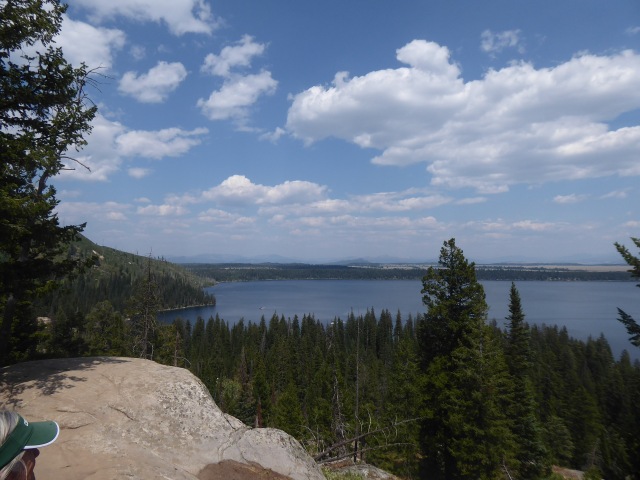 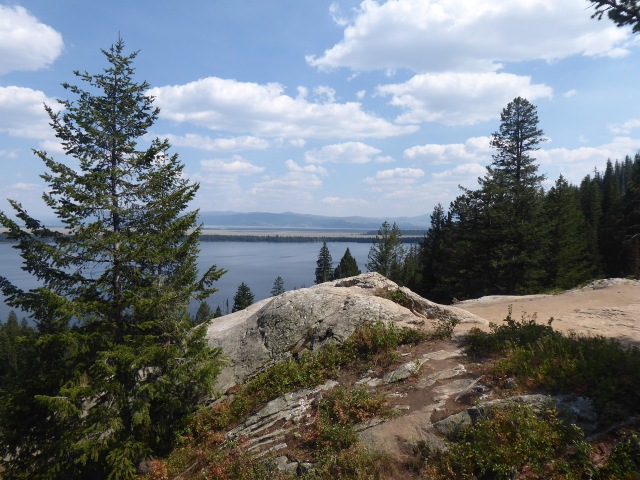 Back at the car, we packed up and drove south to Jackson, just outside the boundaries of the park.  Our destination was a dinner spot we’d searched out on Trip Advisor, Bubba’s, known for pretty good BBQ.  And that is what we got.  Joanna and I ordered a local draft lager apiece and then split a two-meat combo with St. Louis Ribs and Beef Brisket.  While good, it wasn’t the best BBQ I’ve had, the ribs a little fatty for my taste and the brisket a little too dry, minor complaints at best.

Finished eating, we began to work our way back to camp, driving up into the park to make one final stop at Lower Schwabacher Landing, a well-known boat landing to gain access to the Snake River.  Here, one has some of the finest vistas of the Teton Range and a number of excellent images have been painted and photographed from this vantage point. 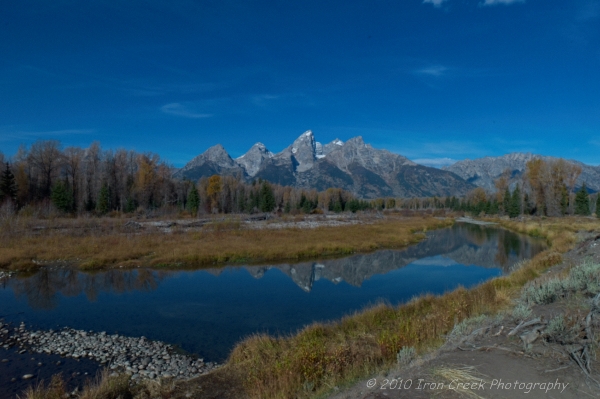 Our View of the Snake River

We walked out to a bend in the river to try to imitate some of the more iconic photos taken there, the water in the foreground, the Tetons rising in the back.  Unfortunately, the continuing smoky skies obscured the view and we left with images of what might have been. 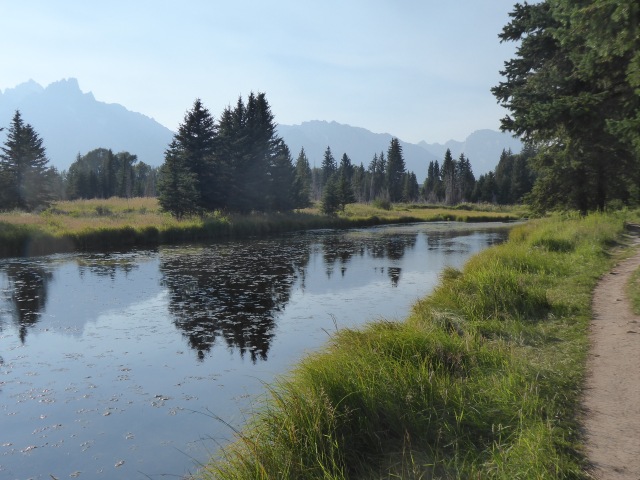 Back in camp we began to pack some items as we needed to get an early start the next day.  We’d have a ten plus hour drive to accomplish and also wanted to stop on the way out of the park at a site we’d missed that day, the Mormon Row. 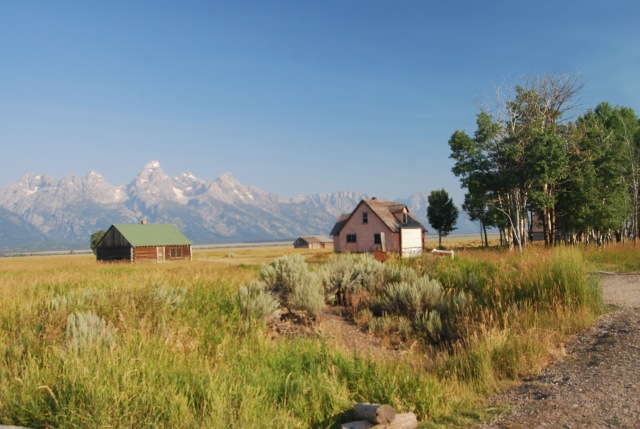 As planned, we arose just before daybreak, broke camp, packed the car and made our way over to the Colter Village store to hit the coffee bar inside when it opened.  During our entire stay in both parks, Rendy had carried with him a can of bear spray Irene and Ric had given us and now that we were leaving, he wanted to give it one test blast before paying it forward to some other park visitor. 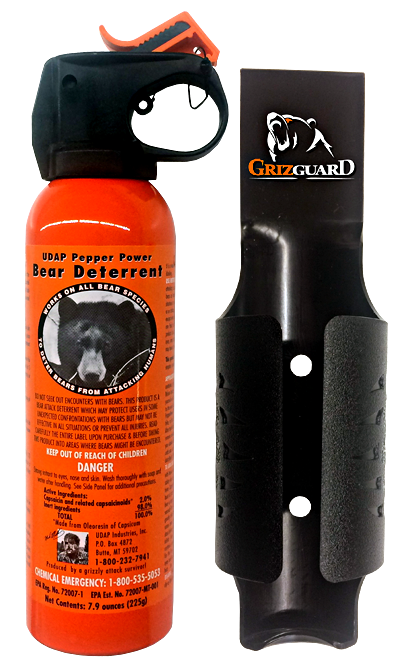 So, just before we climbed in the car to leave camp, he walked a few paces to an open spot and let fly a big spray, then left the can on top of our bear locker for the next group of campers.  As we pulled into the parking lot of the market, Rendy, having forgotten about the test spray, touched his face and you guessed it, got some of the spray (its highly concentrated pepper) in his eyes.

Don’t Try This At Home

Our first thought was that Jenny Manetta had followed us for over two months to now finally strike here, but then realized she is our nemesis and not Rendy’s, so we instead decided it was a test of his new super power, earning him the nickname of ‘Poison Finger’.  We’ll see if it sticks.  While he was washing out his eyes in the restroom, I snagged a round of coffees for the car and we started down the road. 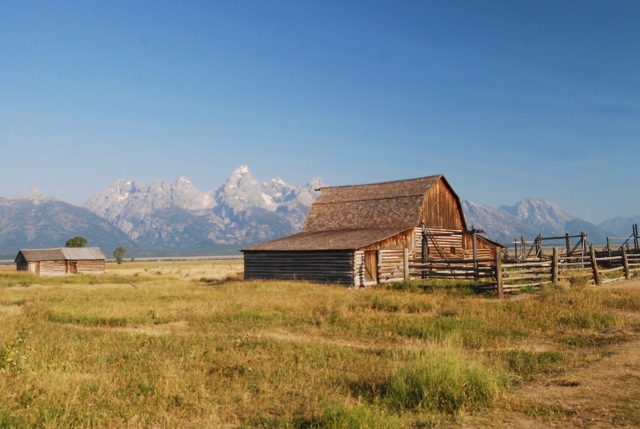 It didn’t take long to get to the turnoff for Mormon Row and we spent about thirty minutes there, walking out amongst the houses and barns that still stand.  This homestead complex is a classic example of the rural historic landscape’s period and includes the construction of the Andy Chambers, T.A. Moulton and John Moulton farms from 1908 to the 1950s.

Six building clusters and a separate ruin illustrate a typical Mormon settlement in the area and comprise such features as drainage systems, barns, fields and corrals.  The homesteaders began to arrive in the 1890s from Idaho, creating a community called “Gros Ventre”, with a total of 27 homesteads.  They tended to create clustered communities, in contrast to the isolated homesteads more typical of Jackson Hole and the district was added to the National Register of Historic Places in 1997. 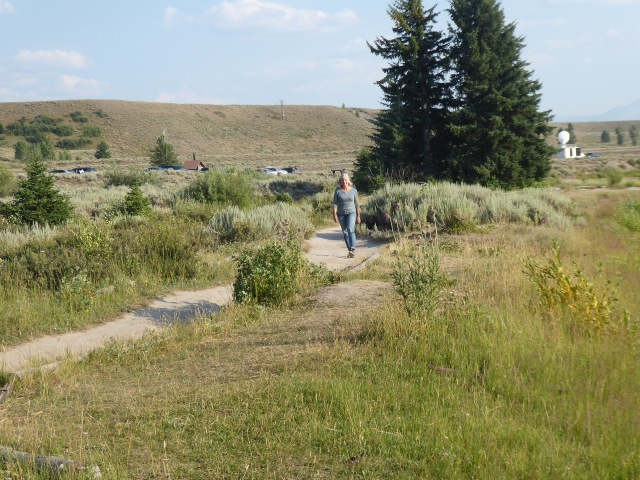 Joanna at the Landing

The long drive down to Cedaredge gave us time to reflect on our experience in Yellowstone and Grand Teton, particularly in determining which of the two appealed to us the most.  The oldest national park in America, and for many the greatest, Yellowstone has a lot going for it but in the end, I found it to lack elements that appeal to me the most.  Some of this has to do with my long-time attraction to Yosemite, a park defined by its physical layout, compact enough to explore easily with dynamic and spectacular vistas.

The Sun Setting on Half Dome

Yellowstone’s immense size works against it; the need to drive 30 minutes or more to get to a sight or trailhead gets tiresome over time.  Also, once you’ve exhausted the major geologic elements (geysers, the falls, etc.) the other major attraction is the abundance of wildlife (much of which we never glimpsed).  If viewing wild animals is big on your to do list, this is the place for you. 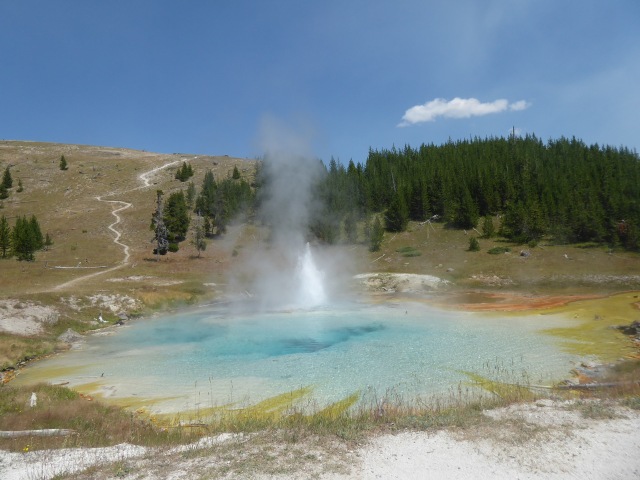 As for cycling, Yellowstone is difficult as the roads are all two lanes with not much of a shoulder.  Speeds are contained but having to contend with distracted drivers focusing on road-side sights makes for dicey conditions.  In contrast, Grand Teton has a multi-use pathway that opened to the public in 2009 which currently extends from the town of Jackson, north to Antelope Flats Road.  At Moose Junction the pathway follows the Teton Park Road to the South Jenny Lake area.

Another deciding factor was the lack of robust services, in particular the markets, that made Yellowstone less user friendly.  It’s not really feasible to haul in a week or more’s worth of food if you want to cook most of your meals in camp.  Grand Teton’s superior market’s takes the category hands down.  And finally, its compact size, spectacular vistas, and slightly lower elevation (making it a little warmer in shoulder seasons) won me out.  I likely won’t return to Yellowstone but look forward to another visit to Grand Teton. 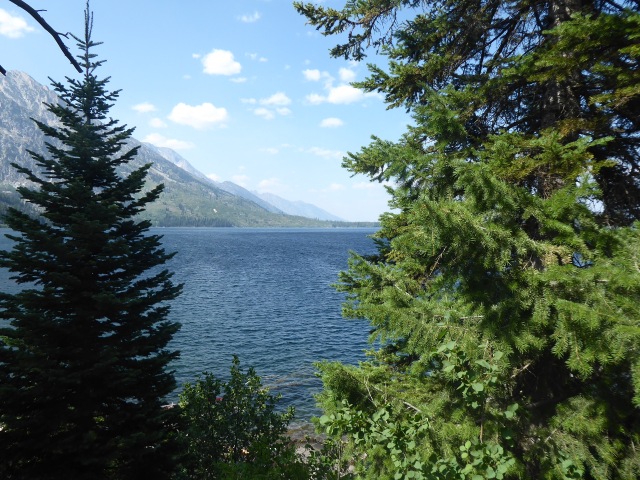