We returned home in the middle of August, to relentless heat and humidity that would stay with us for more than a month, and started riding our bikes steadily as I trained for the weeklong tour I would take at the end of September, Cycle North Carolina’s Mountains to the Coast 2018.  Having done their spring ride the last two years, and having heard much about the challenge and fun that could be had riding this tour, I was all in.

Besides training we had fun trying to get rid of the raccoon family that had taken up residence in our attic.  We’ve been plagued by mice (we’re still not sure we got them all) and at night Joanna kept hearing what she said sounded like someone rustling potato chip bags.  That would Mrs. Raccoon and her three kits running around on the insulation and HVAC ducting while they liberally relived themselves throughout the attic. 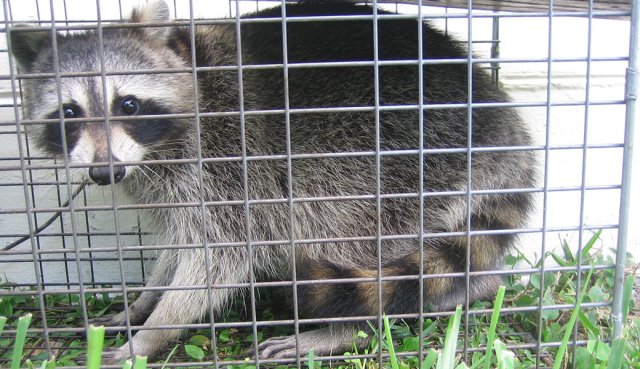 Terminix, our pest vendor (we get quarterly service for generic pests and have an annual policy for termites) has a wildlife division and they came out and within a week had trapped the critters.  They looked cartoon cute in the cages but unfortunately for them, North Carolina requires that they, as the number one vector for rabies in the state, be put down.  So much for catch and release. 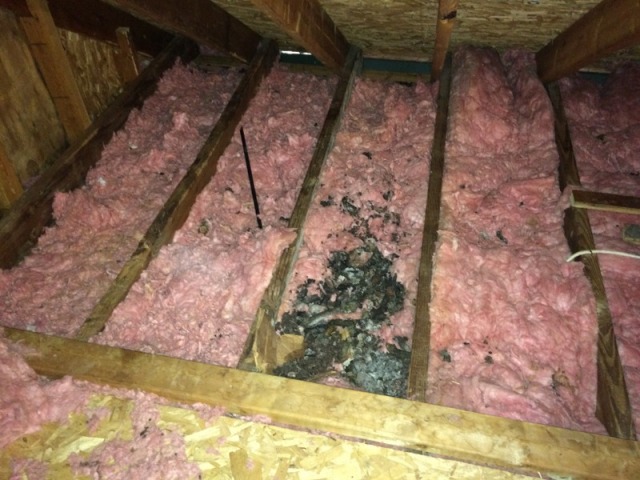 We Were Lucky It Wasn’t This Bad

Since I was in a check writing mood, a month or two later we brought another vendor in (Terminix’s quote was stratospheric) to clean up the left-over poop in the attic and sanitize the space.  We were lucky that we’d caught them early; left alone they can do tremendous damage costing thousands of dollars to mitigate.

To start the tour, I’d drive to Oak Island on a Friday, spend the night nearby and then on Saturday leave my car and take a shuttle along with other tour participants to Black Mountain, the tour’s starting point. This became complicated when a week or so prior Hurricane Florence, crawled into the state, leaving widespread damage along large stretches of North Carolina coastline.

My overnight accommodation was in Southport and when I called early in the week of our departure, they advised they were closed to due flooding and loss of roof.  Fortunately, I connected with a former UNC Charlotte colleague, T.L. and he invited me to stay with he and his wife Gina at their house on Oak Island.  How could I say no? 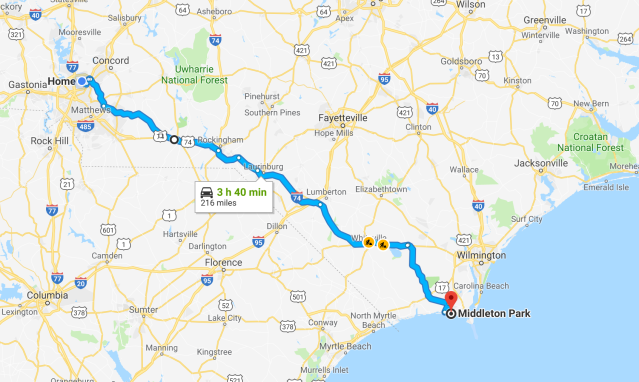 From Charlotte, it’s a four-hour drive to the coast, made a bit dicey this time around as a number of the roads one would normally use were closed.  Using a combination of a Garmin in the car and Waze on my phone, I managed to navigate to the Island without incident and arrived late in the afternoon.  Like myself, T.L. retired some time ago from the university but continued to work part time for the business auxiliary managing projects, but had this summer finally retired full time.

I’d brought a Southern Tier variety 12-pack with me as an offering and we downed a couple before heading on their golf cart to the beach, less than a mile away, to hang out with a group of local friends to watch the sunset and drink copious quantities of white wine.

Waiting for the Sunset with Gina and T.L.

Later we’d head to Oak Island Deli, a dive bar they frequent, for some high fat protein and one final round of beers.  I wasn’t sure what to expect when I’d arrived earlier in the day, but the welcome I received was warm and as I floated off to sleep, I was glad I was doing nothing more strenuous the next day than just riding on the bus for five hours.  Upon arising, I drove to Middleton Park, our departure point to park the car for the duration of the tour and met up with my good friend Bonnie, who I’d be riding with throughout the week as we grabbed seats next to each other on the bus.

I’d dropped my bike off the night before (on the way to the sunset wine drinking fest) and so just needed to put my two rolling bags on one of the two busses hauling those of us who were going to be camping outdoors.

There are three accommodation options for the tour:

The bus ride, while long, went smoothly and once we arrived at Black Mountain Primary School, our lodging for the night, Bonnie and I grabbed our bags and found what we thought would be a good spot for the night, at the far end of the school’s playing fields, a decision I would come to regret that night.  But more on that later.

I’d opted for the provided meal plan, breakfast and dinner each day, and prior to heading to eat, the two of us walked across the street to the Seven Sister’s Tap Room for an adult beverage or two.  With a wide selection to choose from it would have been nice to spend more time there, a warm evening with an inviting outdoor patio.  But dinner beckoned and so off to the school cafeteria we went to try the first of a number of meals.

The food provided was decent, but nothing memorable and as the week progressed, I’d determine that in the future I’d opt not to participate, as the dinners were pedestrian and I generally only eat cereal or oatmeal before riding in the morning, thus having to forgo all of the egg and meat options available each day.  Better to just pay for coffee service for the week and eat energy bars in the morning.

We were off to a good start though, and with a 40% chance of rain predicted, I anxiously crawled into my old Sierra Designs tent, which I’d resurrected prior to the trip so I wouldn’t have to buy a new one.  We’d water tested it in the backyard and it seemed to be water tight.  How effective it would be I’d find later on that night.

Mountains to the Coast: https://ncsports.org/event/cycle-nc/