At 64 miles and less than 1,000 feet of gain, my next to the last day on the bike promised to be easier than other days, but the reality of cycling can be the opposite, sailing through the tough rides and struggling with a day like today.

My first sign of trouble occurred about ten miles in when attempting to shift from the small chainring in the front to the big one it wouldn’t go.  This happens when a cable loosens or the front derailleur gets out of adjustment, but on the road with limited mechanical skills, it meant I’d be riding in the small ring the whole day.  On a flat course like today this was mildly problematic as it limited how fast I could go, generally no more than 20-mph or so.

As the day progressed the temperature continued to climb, soon becoming a burden.  Pulling into the next to the last rest stop I dropped in on the mechanics tent and soon thereafter had a fully restored drivetrain.  During the stretch to the last rest stop, I hooked up with a fellow wearing a Seattle based cycling jersey who matched my speed and style and we traded pulls, one of us breaking the wind for the other.  This helped as the heat and humidity were starting to take a toll on me.

I drank a ton of water and Powerade at the stop, taking my time as I knew the last 13 or so miles to camp would be tough as I was already feeling a bit queasy from the heat.  As I stood around, I noted a number of other riders inquiring about taking the SAG vehicle in as they were beginning to suffer from heatstroke.  And, a little dazed, I left one of my favorite blue water bottles (they match the trip colors on my bike).

I set out at a moderate pace, trying to keep within my limits, riding just hard enough to not blow up and stopping a couple of times to cool off.  Aware of how the heat was affecting the riders, one of the SAG wagons pulled up next to me and inquired how I was doing, then handing me a couple bottles of much needed water.

In Camp at End of Ride

Soon enough I arrived at Bladen County Recreation Center in Elizabethtown and before I went to claim my bags and set up camp, I stopped to down a couple of small bottles of Powerade at the recovery station (drinks, limited massage, some yoga, etc.).  Feeling better, I retrieved my bags and staked out a spot for myself and Bonnie in an open area devoid of any shade.  Later she and I would take our chairs over to the pop-up tent the tour used to shelter the charging station (dozens of plugs to refresh your phone, iPad, head or tail light, GPS or another device) and further cool down there.

I made my way across the street, somewhat of a long walk, to the shower trucks and upon arriving discovered I’d forgotten my towel.  In no mood to walk all the way back to my tent I made the best of the situation and used my bike jersey; not much toweling off was needed as moisture evaporated quickly, then soon enough returned when you started to sweat.

Later, I walked over to a nearby city government complex where the massage folks were located for my last session of the tour.  I’ve concluded over time that taking advantage of this type of service can dramatically improve your ability to recover from multiple hours in the saddle, helping tired muscles and easing those spots that tighten up over the course of the tour.

With no dinner options nearby, I availed myself of the plan meal, consuming food that was completely forgettable, then grabbing a beer when finished from the beverage tent and sat down to listen to a good band with some other members of our bike club (Charlotte Area Cycling).  They had opted to join the last three days of the tour, one of the nice aspects of is that you can just ride sections if you don’t want to ride all of the miles. 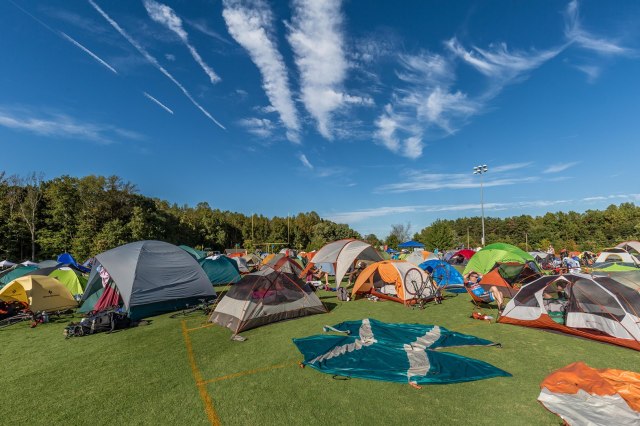 We all hit the sack early as the next day, our last, would be a long one at 74 miles.  After some internal debate, I’d decided to drive home after finishing instead of camping one more night, so getting done early was a goal.  It also meant the potential to ride before it got too hot, having witnessed the downside of heat and humidity the day before.

Normally, I’d been leaving camp around 8am but this time I was on the road by 7:30.  It was foggy and cool, a promising start to a long day in the saddle and as I set out I felt really good, all of the drama of the early part of the week dispersed, my body into the daily rhythm of camping and riding.  I dodged in and out of a few pace lines for the first twenty miles or so and then fell in with a group of ten riders whose speed matched my own and there I would stay until we crossed over the bridge into Oak Island with just a few miles to go to the finish.

I ended the day having averaged 17.4 miles per hour, getting to my car a little after noon.  The day could not have worked out any better than if I had planned it, the serendipitous nature of riding aligning me with a group that helped me power to a fast finish.  I retrieved my bags and loaded the car before heading to the nearby shower truck.

Exiting cleaned up, and then immediately getting wet again from humidity induced sweating, I walked over to the food area looking for the promised beer garden and to check out the final provided meal.  The food as was to be expected wasn’t that appealing and when informed that it would be another hour or more before the beer arrived, I decided to cut my losses and make a run for home.

I stopped at a McDonald’s, the first fast food joint I could find after I’d left the island.  Many folks slam this chain, but they serve a consistent product, like it or not.  Energy stores replenished I made the drive home without incident, tired but content.  It had been a long and eventful week, one full of mishap and disaster and yet coming full circle to a tour that I could finish with a deep sense of satisfaction.

I’d overcome a number of obstacles and by the last day found my form and turned in a really good days ride, thanks to that pace line.  I could now look forward to our next tour, the Ragin’ Cajun in Louisiana in about a week.  We’ll cover that in our next series of posts.  For now, though I’m looking forward to seeing what next year’s Mountains to the Coast route will look like.  I could be riding it again, but this time with a better tent.