Besides hanging out with friends we would dearly miss during our last few days in town, we did get out for a few bike rides and one memorable on I’ll refer to as the nostalgia ride.  During our eleven years of riding in and around Charlotte we’d initially ridden a lot in a disappearing rural area north and east of the University.  And that is where this ride would take me. 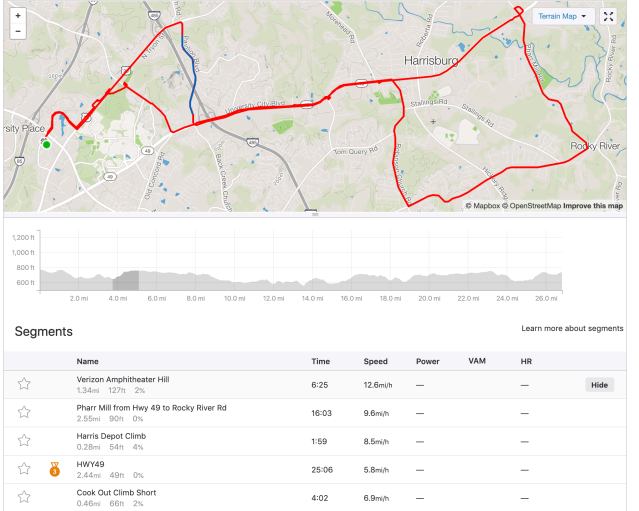 Starting at the Drury Inn where we were staying in anticipation of the arrival of the Cisco’s, I rode around Sweigart Pond and the Shoppes at University to Highway 29 and there turned north riding past UNC Charlotte, the Flying Saucer, then crossing Mallard Creek Church and the I-485 before turning onto Pavilion Blvd to pass the large Amphitheater there before connecting with Highway 49. 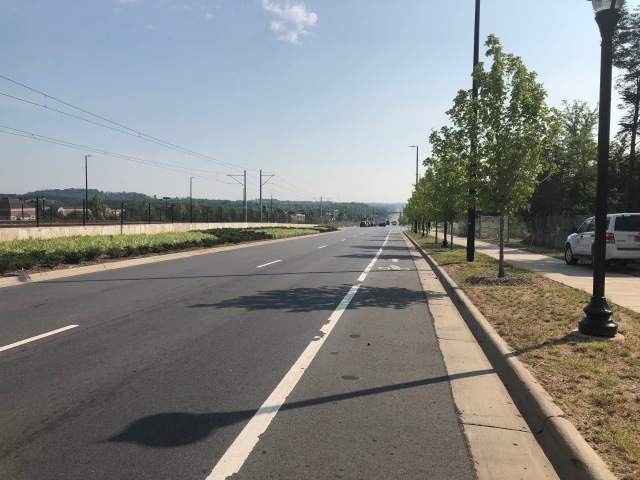 From there it was eight miles up the road through Harrisburg to Phar Mill Road, where I turned east, riding by some historical buildings until I came to Rocky River Road, 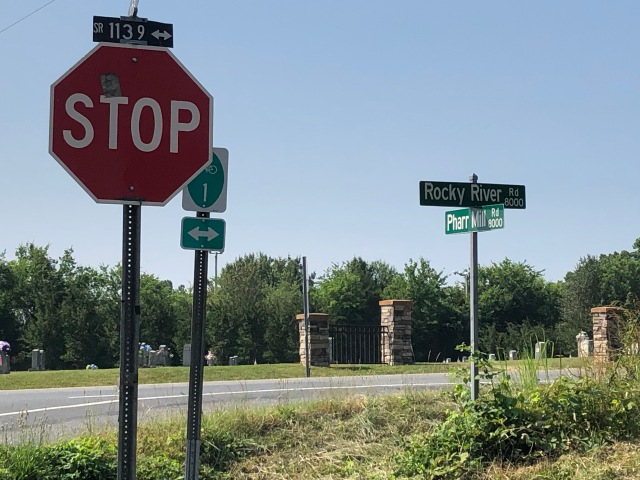 turning right to take me back the way I came until I connected with Robinson Church Road which returned me to Highway 49 and then back to Mallard Creek Church and Highway 29, which would take me to the Drury Inn. 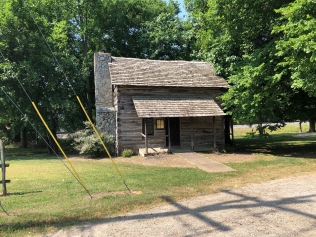 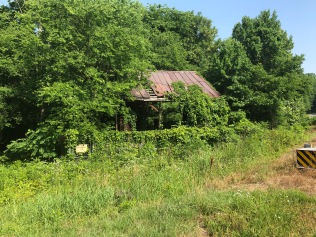 When I started the ride, it was a mild 88-degrees that would turn into a scorching 100-degrees (with high humidity), forcing me to climb the last bit of uphill on the 29 at a slow and controlled pace, as I was feeling a touch queasy from the heat. 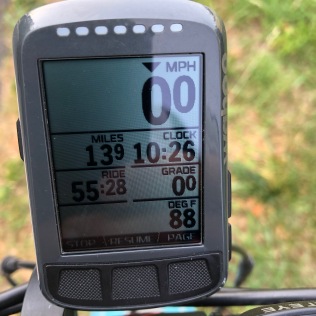 Just 88 Degrees Early in the Ride 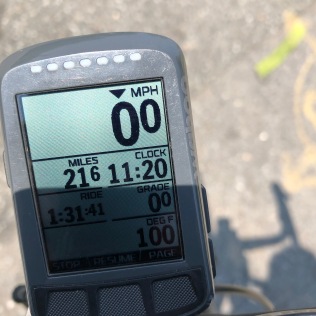 Just 100 Degrees at the End of the Ride

All in all, I covered a little over 28-miles, but in reality, it was more like eleven years as I revisited many of the rides we’d done during our stay in Charlotte. 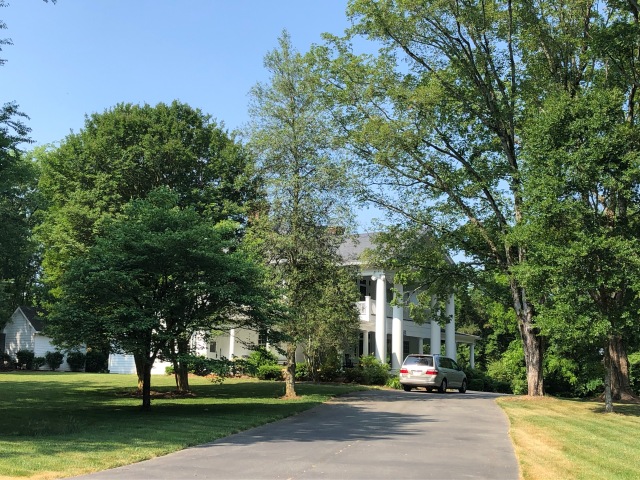 Friday, our last day in town, went quickly with a 27-mile greenway ride with Bonnie and Charlie, relaxing in the afternoon and then meeting them again for a run to two of our favorite places, Birdsong Brewing for beers and then Intermezzo for dinner.

Although known for their pizza, we’ve been eating there since our earliest days in Charlotte and because of the great range of Serbian dishes they serve, never actually had a pie. 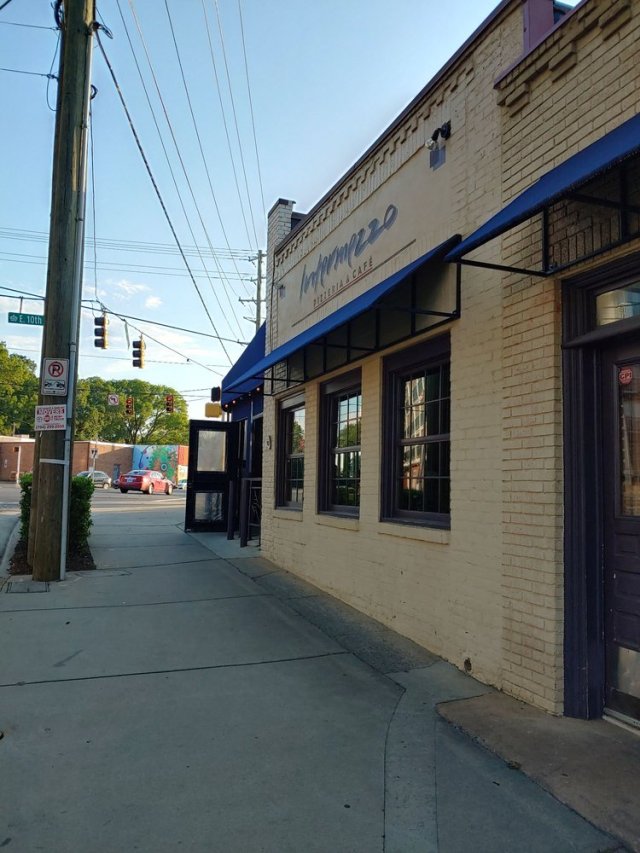 That night we ordered the Roasted Red Pepper Bruschetta (artisan olive oil, balsamic, fresh mozzarella on house made bread) for the table

and then split the Chicken Francese (rosemary mashed potatoes, asparagus, white wine lemon butter sauce), a delightful finish to our last dinner in Charlotte for the immediate future. 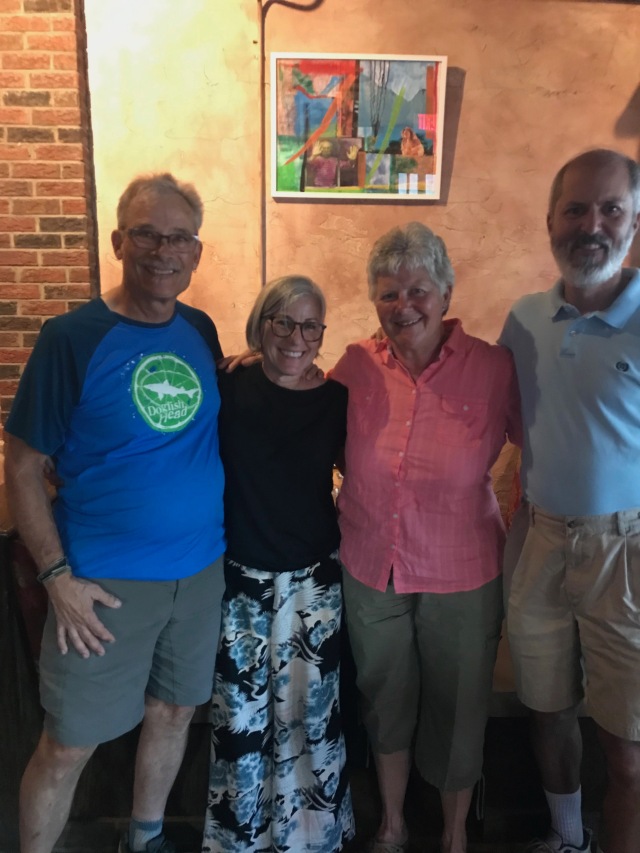 The Cisco’s all arrived later that night and we stayed up late conversing (they were all still on west coast time) and demolished a bottle of Remy Martin VSOP, a considerable accomplishment considering that JB and I did most of the damage to that fine product. 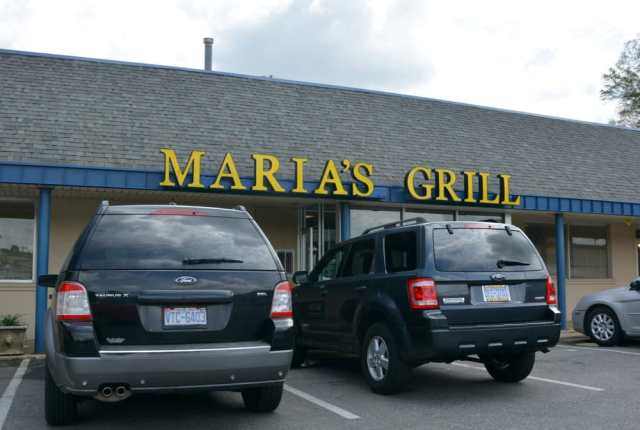 The next morning, we packed up, checked out and met Doug’s friend Garin and his wife at Maria’s Grill for breakfast.  They had just moved to Charlotte from Denver for work and we were able to give them a number of recommendations about things to do and places to eat in town. 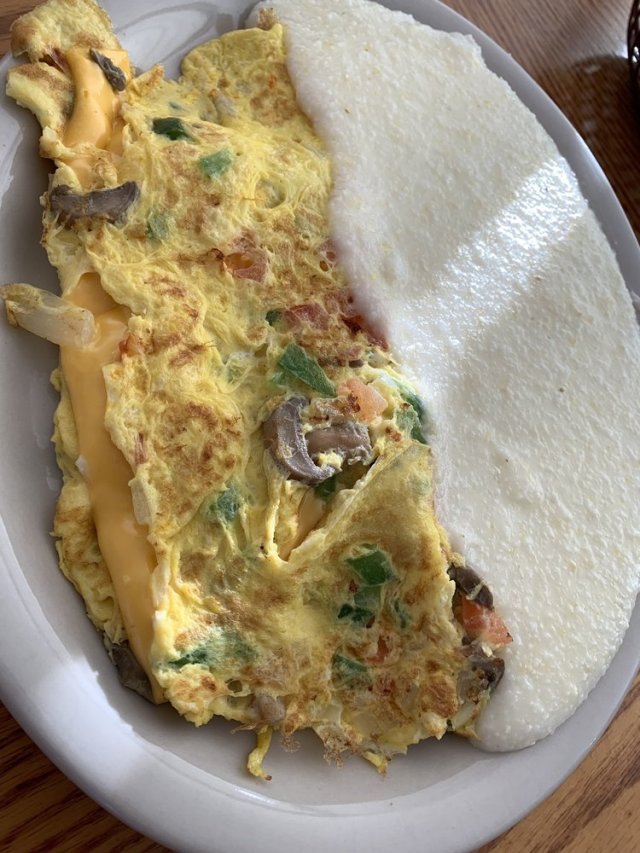 And then we took off for Greensboro and two nights at Ann and Rendy’s house, our first stop on the road west.  We’d spend the time eating and drinking and immersed in conversations, most covering the many experiences we’ve all shared in the over fifty years we’ve known each other. 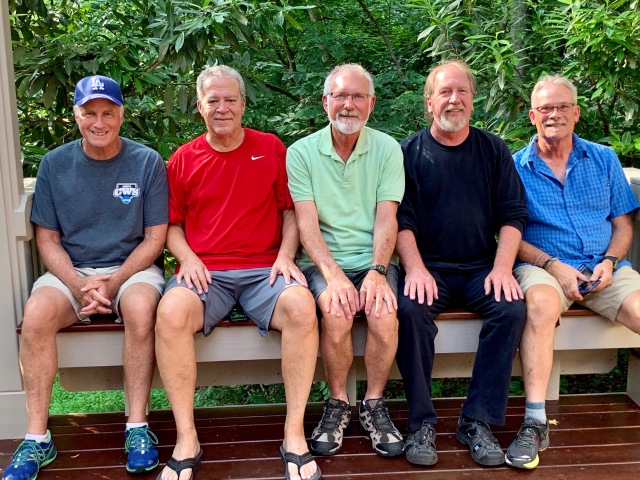 On Saturday we drove to High Point for a visit to the Hoggatt House, part of a historical park containing two other buildings (John Haley House circa 1786 and a working blacksmith shop from 1841). 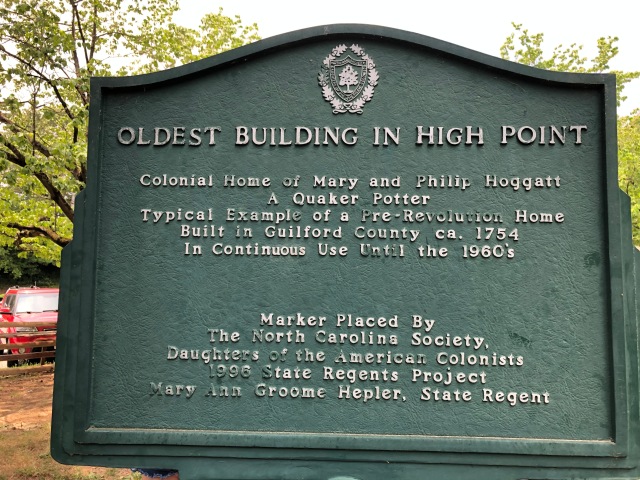 The house was built by one of Doug’s many ancestors in the late 1700’s but isn’t listed in the National Historical Registry because it was built on the city’s west side and was moved to the historical park in 1973; structures not on original sites don’t qualify for the national registry.  Heavily damaged by a lightening caused fire in December 2004, it has been restored to reflect its condition during its early occupancy. 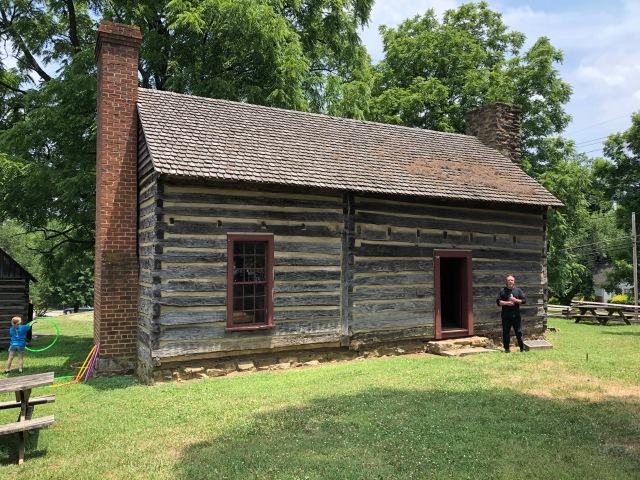 Doug at the Hoggatt House

After walking around and inside the houses, we visited the adjacent High Point Museum, a well thought out and comprehensive collection of the city’s history.  High points were a room full of Meredith’s Miniatures and a comprehensive exhibit on furniture manufacturing, a reminder of High Point’s central role in this industry. 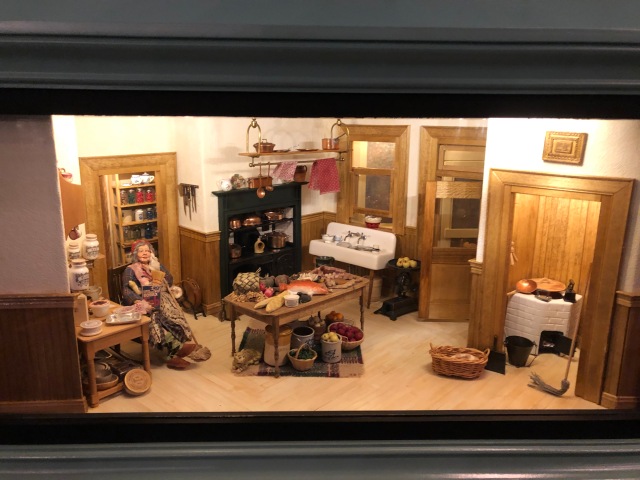 Later in the day, after returning to the house, Rendy brought his Mom over (she recently moved from her home in Southern California to Greensboro) and we all sat out on the screened in porch reminiscing about our youth, he and I having known each other since we were eight years old.  At one point during a conversation, after she had mentioned that most of the folks at her retirement home whine a great deal, I caught her whining about some issue and pointed it out.  She promptly gave me one of those looks that only a Mother can give, and I was thankful that I had positioned myself outside of her reach because if I had been closer, she would have given me a well-deserved thrashing.

Later in the day we made our way to Rody’s Tavern for dinner, a local ‘sports restaurant’ touting scratch made food.  It was perfect for us given that our large group could get seated quickly and the varied menu had something for everyone.  Joanna and I split the reasonably priced and decent portion sized Southwestern Spring Rolls and a Reuben, both good but not great.  A varied and inexpensive drinks menu was a bonus and to finish I celebrated with a 16-ounce Dogfish 90-minute IPA, one of my favorites and a bargain at six bucks. 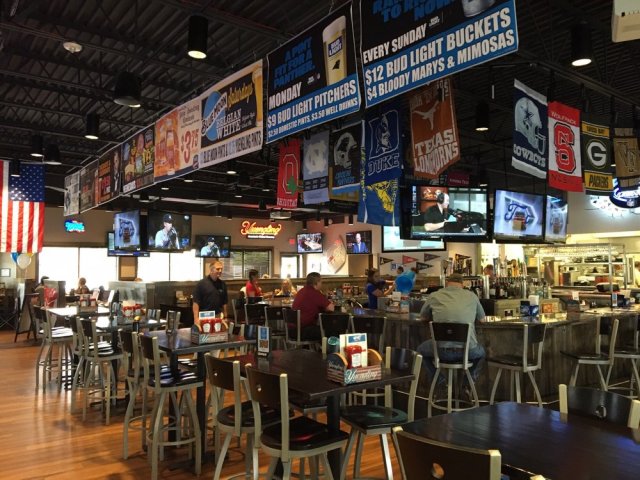 And that completed the first stop in our westward movement.  After months of speculation and uncertainty, selling the house and setting up the move, we were finally in motion and although we already missed Charlotte, it felt good to finally be heading towards a new beginning, albeit in familiar surroundings, our old house in Mar Vista.  We’d get to deal with making the house livable, enjoy reconnecting with old friends and surveying what had changed in the eleven years we’d been gone.  Let the adventure begin. 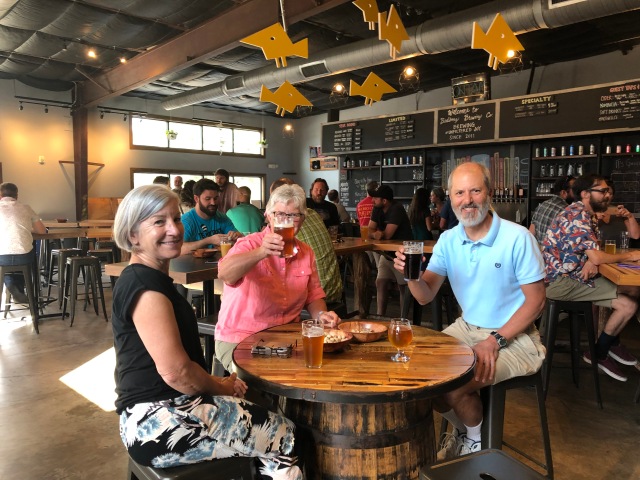 Joanna, Bonnie and Charlie at Birdsong