That first day back in L.A. it will come has little news to followers of this blog that our first meal out was at Paco’s, our Mexican food purveyor of choice since the beginning of time, or at least not long after the demise of the infamous El Tepa at 14th and Pico in Santa Monica that I and the Cisco’s frequented back in the 1970’s.  . 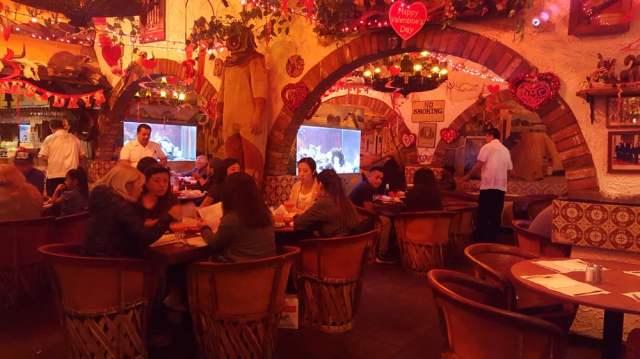 It would be the first of three trips we’d make there in the next couple of weeks, each as welcoming as that first one.  Not to think we were stinting on Mexican Food in general, we’d also find the time and the appetite to drop into our other local fave, Campos Famous Burritos for their out of this world ‘Famous Avocado Burrito’. 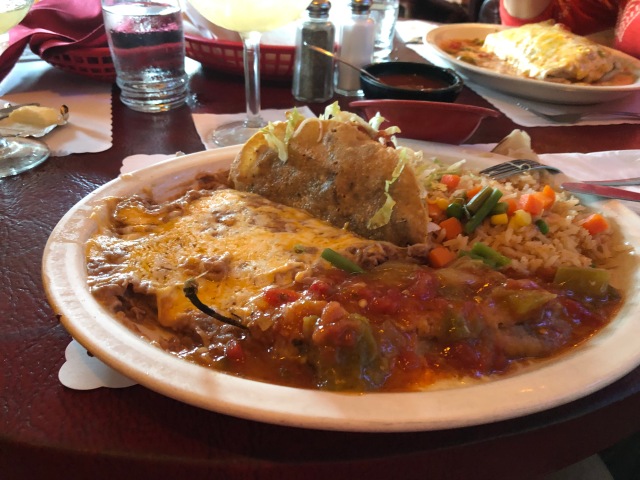 And so, challenged by the task ahead of us, that is figuring out how to cram what our Charlotte home at 2,600 square feet and two car garage had contained into our now 1,600 square feet and single car garage residence (we would make this happen), the biggest adjustment would be to try to figure out where stuff was once we’d located a new home for it. 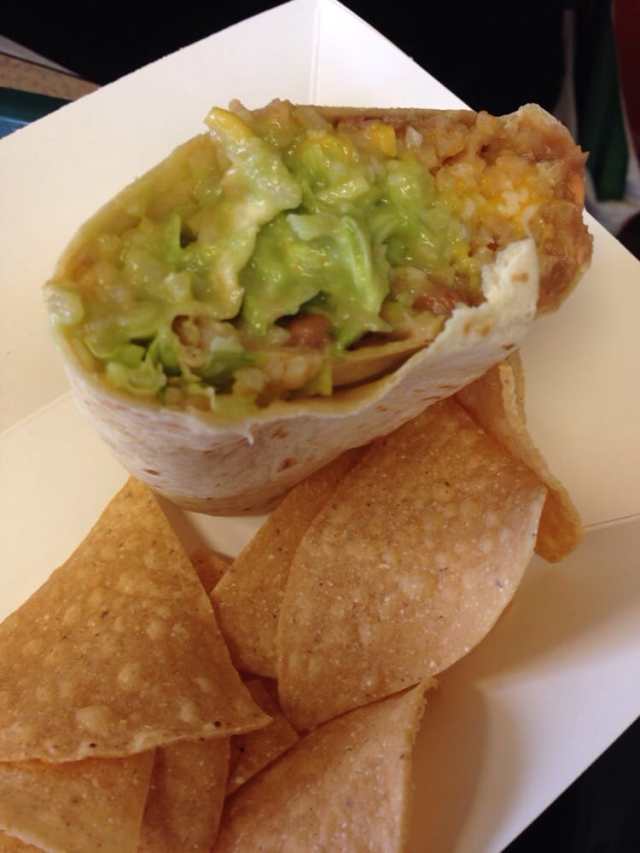 To provide sustenance, we’d continue to tick off stops at all of our old favorites and try out a few new ones.  Doug returned to the house a day after I arrived and provided us with invaluable assistance moving, straightening and most importantly, getting the garage ready for it to perform its new primary task, that is as a big storage locker.  Ron came over as well and helped us unload the 12-foot POD with the last of our belongings, and then perform yeoman’s work with a chain saw and axe dispatching the dead plum tree in the back yard. 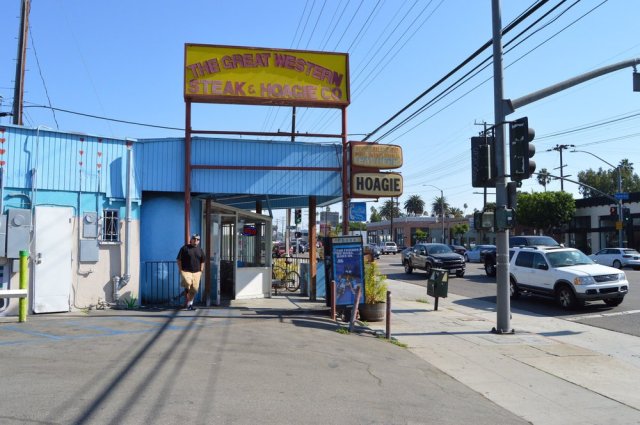 Our first lunch out was to bring home one of the best cheesesteaks on the planet from Great Western Steak and Hoagie on Lincoln Blvd.  Not a true Philly cheesesteak, their take on it can’t be beat, particularly if you order the pepper, mushroom version with onions and pizza sauce.  This place goes way back for me, to the 1970’s and concerts at the Santa Monica Civic (Eagles, Steely Dan, Traffic, Loggins and Messina, Poco, etc.) and leaving intoxicated on various substances, arriving at this joint in Rendy’s old Ford Pinto. 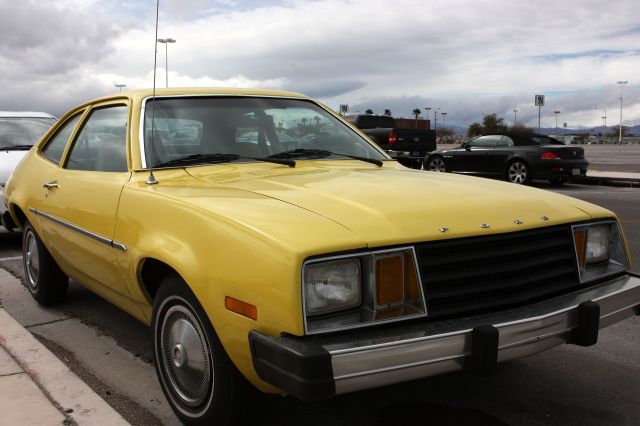 We get our orders and it being late and cold, try to eat them in the car, I and my then girlfriend sitting in the back seat, the windows fogging up from the heat of the sandwiches so hot the first bite burned the roof of your mouth as you knew it would and still couldn’t help restrain yourself from taking that bite.  These are messy things to eat and you can never have enough napkins, a towel is your best form of defense and honestly, who has a towel in the back seat of a Pinto?  So, you sit there with this dripping mass in your lap and you just don’t care about the mess, or the roof of your mouth because each bite is a bit of heaven. 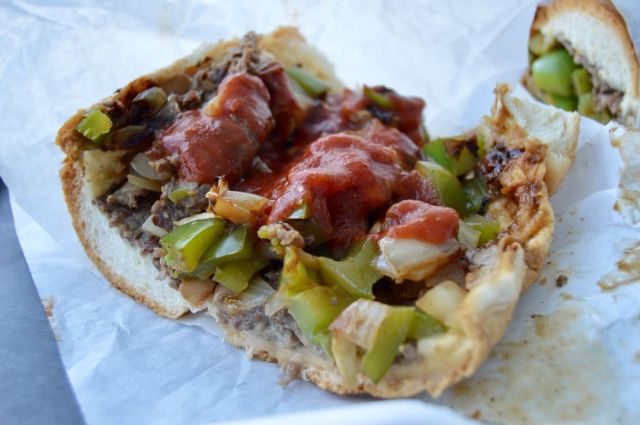 Later that week just before Doug flew home, we dropped into Rasselbock, a new restaurant (new since our departure in 2008) on Grandview Blvd, a shade less than a mile away. 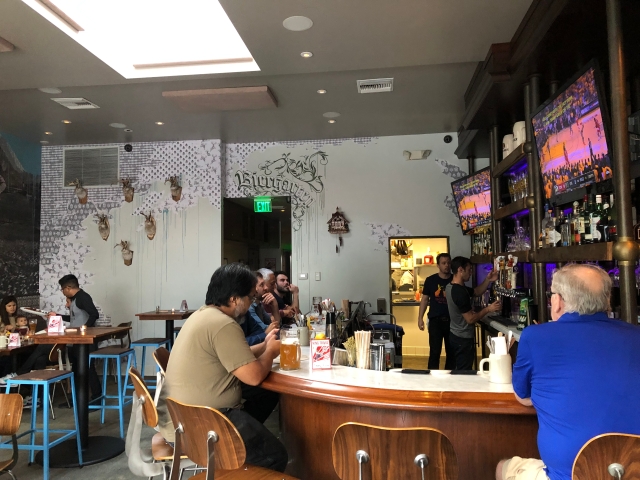 Featuring twelve beers from Germany on tap, I selected a Weltenburger Asam Bock and Joanna a Erdinger Hefeweizen to wash down our starters of Beef Goulash Soup and a Currywurst. 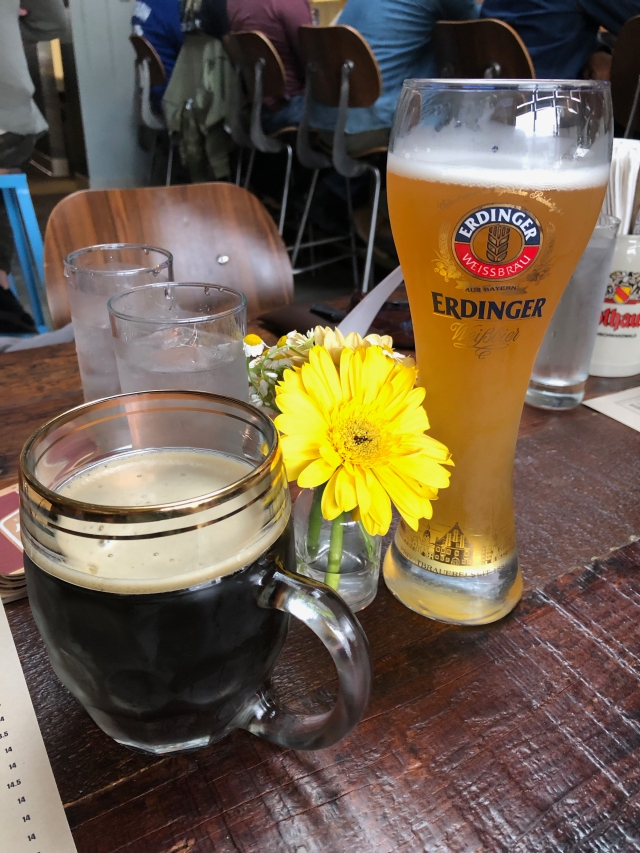 Asam Bock and the Hef

These are two are our staples when visiting Germany, the Wurst being the first thing we seek out after landing.  This was a good one but curiously, it could have used twice as much curry powder and the Goulash was more stew like than soup like, large chunks of tender meat dominating the dish with little else to speak for it. 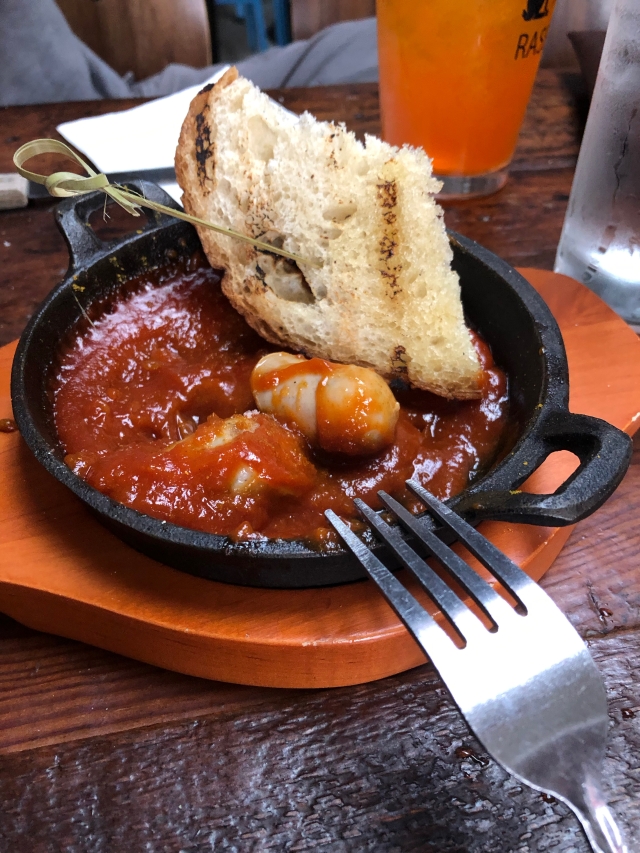 For an entrée Joanna and I split the Jaegerschnitzel while Doug enjoyed a Weinerschnitzel.  Here they got it just right with one of the nicest pork cutlets I’ve had covered in a savory mushroom based creamy sauce.  When combined with a savory spaetzle and tangy cucumber salad, we couldn’t have been happier.  We finished the meal with a very good apple strudel and waddled out of the place to the car and then home. 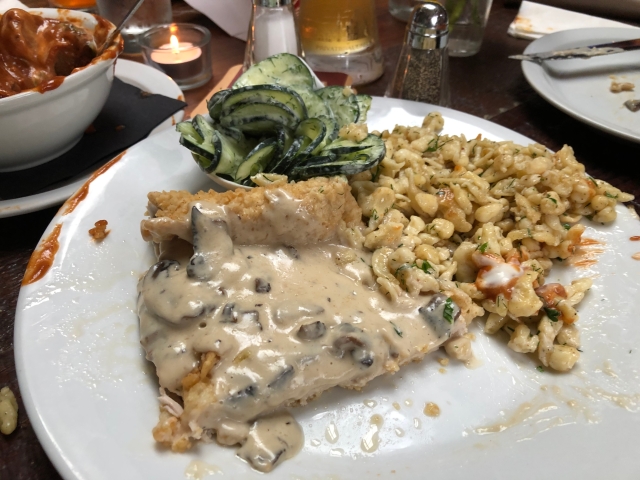 And thus would follow a number of excursions to some familiar haunts as well as new ones, starting with the Firestone Walker Brewing Company in Marina del Rey. 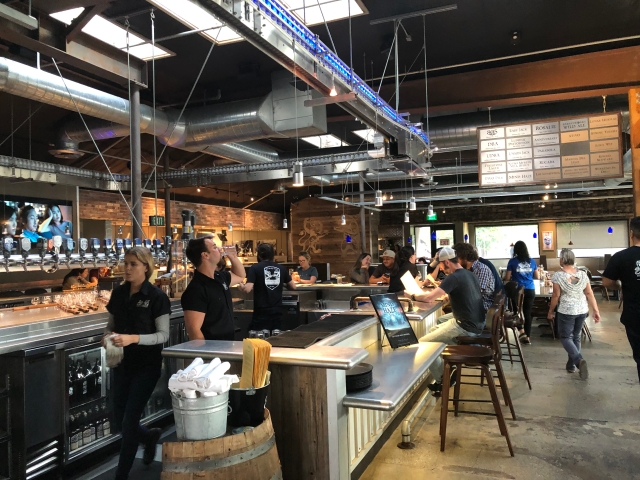 Here we enjoyed very good French onion soup, fish and chips and some beers, finishing with an Imperial Brown Ale created in collaboration with Cigar City. 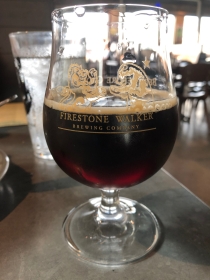 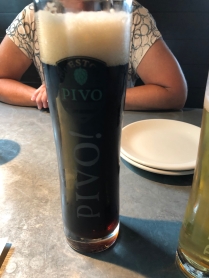 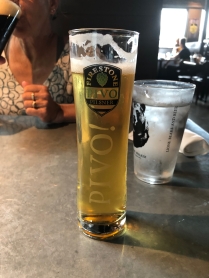 This is a big operation with a nice feel to it, featuring many barrel aged versions of stouts, browns, and barley wines, definitely a tempting place to have nearby.

Just two blocks away in the old Snug Harbor location is the Washington Ale House. 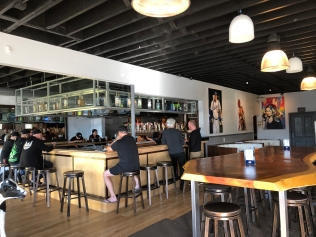 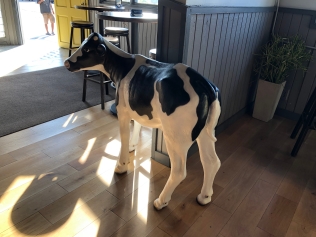 Here we sat at the bar amongst a bunch of folks from the neighborhood, mostly male, and under the influence of a rap heavy background of music tried out a few of their forty some draft beers, a very interesting bowl of clam chowder, the thickest I’ve ever eaten and yet so full of clams you got one or more in every bite, and great little $3 tacos. 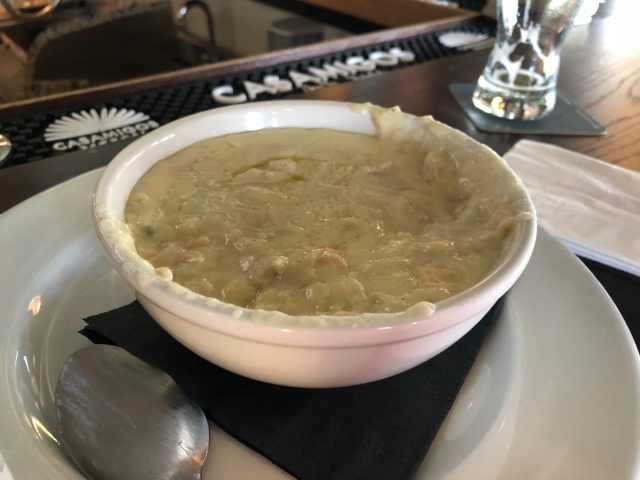 I’ll follow up on some of our other findings and activities in the next post.  Until then remember, traveling, eating and drinking, are activities best summed up in the quote “Living well is the best revenge”.  Seems like good advice to follow. 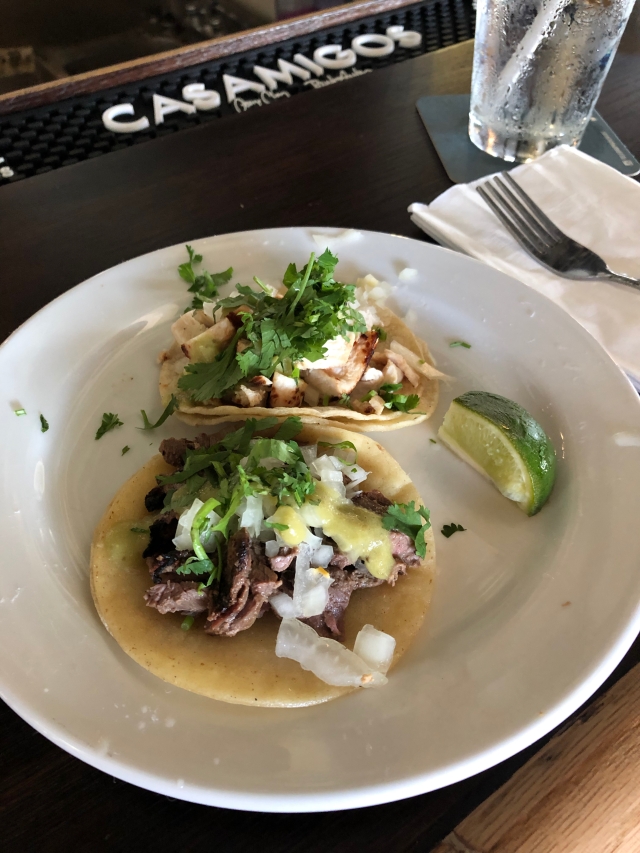