Towards the end of August, we would kick off what would be full fall season of travel.  Before we could start though, we had one more Los Angeles based bit of fun and tourism to do and that was to host a visit with Ann and Rendy as he and I would celebrate our 50th high school reunion from Venice High School. 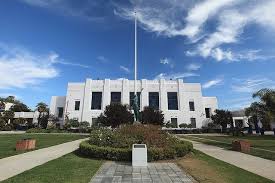 He and I have been friends since the third grade attending all but a couple of years of school together (he went to Palisades High for a year or two) and it was nice to have he and Ann here to welcome us back to this house I’ve lived in off and on since I was two years old.

We hit a Dodger game on Wednesday (they won in dramatic fashion in the bottom of the ninth) and finished it off with a drive down Sunset Boulevard all the way from the stadium through Hollywood, Beverly Hills, Bel Air, and the Pacific Palisades to the ocean and Pacific Coast Highway.

Beethoven Elementary 1962 – I’m third from the right three rows down, Rendy first on the left four rows down

With Ann arriving later that night, we all took off the next morning to another one of those cultural icons rarely visited, in this case the La Brea Tarpits.  A staple of elementary school field trips, I’d not been there for longer than I can remember.  Comprised of a group of tar pits around which Hancock Park was formed in urban Los Angeles, natural asphalt (tar—brea in Spanish) has seeped up from the ground in this area for tens of thousands of years.

The tar is often covered with dust, leaves, or water which obscures the danger lurking there to trap unsuspecting animals and over many centuries, the tar preserved their bones.  Animals would wander in, become trapped, and eventually die.  Predators would enter to eat the trapped animals and also become stuck.  As the bones of the dead animals sank, the asphalt would soak inside turning them a dark-brown or black color.

We spent an hour or more in the well-curated George C. Page Museum, whose history began in 1913 when George Allan Hancock, the owner of Rancho La Brea, granted the Natural History Museum of Los Angeles County exclusive excavation rights at the Tar Pits for two years.  During that period the museum was able to extract 750,000 specimens at 96 sites, guaranteeing that a large collection of fossils would remain consolidated and available to the community.

Lunch time approaching, we drove to the nearby Original Farmer’s Market, a staple in Los Angeles since 1934.  I can recall visits here when young with my Aunt Ruth, when the shops though touristy, featured a wide variety of items to fuel the imagination.  Today it is more of a food emporium, with many produce and meat purveyors as well as over thirty eateries featuring cuisines from around the world.

Splitting up, we each chose different items, with Joanna and I splitting a woefully mediocre and overpriced sandwich.  Ann and Rendy’s choices looked to be much better, indicative of the variety of choices and prices one often finds in markets of this nature that cater to tourists. 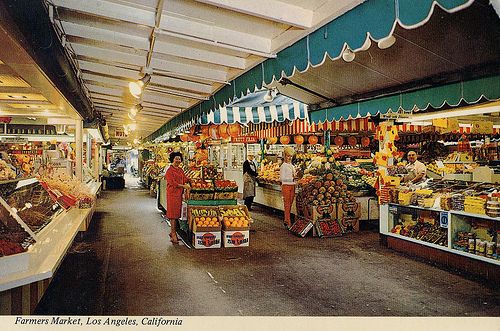 Later in the week, Joanna and I would attend a happy hour for my reunion and then Rendy and I would enjoy the big event on Saturday, a chance to catch up with folks, many who we’ve known since elementary school.

And then finally, we launched the beginning of what would be our reintroduction to fun travel as opposed to moving travel by joining REI Adventures for an overnight campout on Santa Cruz Island.  Located off the southwestern coast of California, it is the largest island in the state and of the eight islands in the Channel Islands archipelago at 22 miles long and 2 to 6 miles wide with an area of 61,764.6 acres.

Archaeological investigations indicate that Santa Cruz Island has been occupied for at least 10,000 years.  The Chumash people who lived on the island developed a highly complex society dependent on marine harvest, craft specialization and trade with the mainland population.  Juan Rodríguez Cabrillo first observed the island in 1542, later estimated to be inhabited by 2,000 to 3,000 Chumash on the three northern Channel Islands, with 11 villages on Santa Cruz. 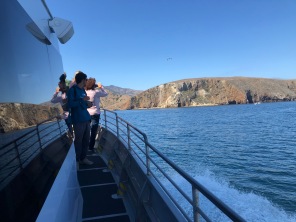 Piles of Gear at Island Packers

Held by Mexico prior to 1850, when California became a state the Treaty of Guadalupe Hidalgo required that land previously granted by Spanish and Mexican governments be proved before the Board of Land Commissioners.  A claim was filed with the Land Commission in 1852, confirmed by the US Supreme Court in 1860, and the title was eventually transferred to William Barron in 1857. 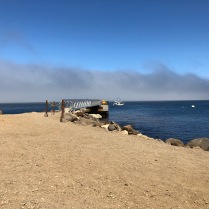 The Bay at Scorpion Ranch Left

The Bay at Scorpion Ranch Center

The Bay at Scorpion Ranch Right

Up to 1987 when the property passed to The Nature Conservancy through a prior agreement with then owners the Stanton family, the island operated as a sheep and cattle ranch.  The last of the 10,000 sheep on the island were removed by 1999 and the Conservancy rapidly liquidated the cattle operation ending the ranching era on the island. They also were able to eliminate the last of the feral pigs by 2006.  The impact of the ranching operations can still be seen today with native plants being dominated by those brought in to enhance the feeding of animals.

Once A Busy Sheep Ranch

We met our group at Island Packers near the headquarters of the Channel Islands National Park in Oxnard.  After loading our gear on the boat, we cruised for about 90 minutes over relatively calm seas to the dock at Scorpion Ranch, our home for the next two days.  Upon arrival we climbed up a ladder from the dock to the landing, unloaded our gear from the boat and before walking a mile or so to our campsite, listened to a welcome introduction from a park ranger, emphasizing among other things the need for proper food storage.

And that walk, carrying our gear hit my back hard, those long familiar spasms returning with a vengeance.  This would determine my scope of activities for the next two days; instead of doing any hiking I’d sit around camp and get a lot of reading done.  We’d be in Yosemite in a week and I wanted to recover enough to do some hiking there, thus not pushing it seemed to be the better course of action.

And so, Joanna would hike both days and I’d sit around camp watching the cute little Island Foxes roaming the campsites looking for stray bits of food.  The ranger had warned us about how crafty they are, recommending that we keep the tent door zipper closed at the top of the door as if it is at the bottom, they know to stick their nose into it forcing it open so as to access the tent and steal any food stored inside. 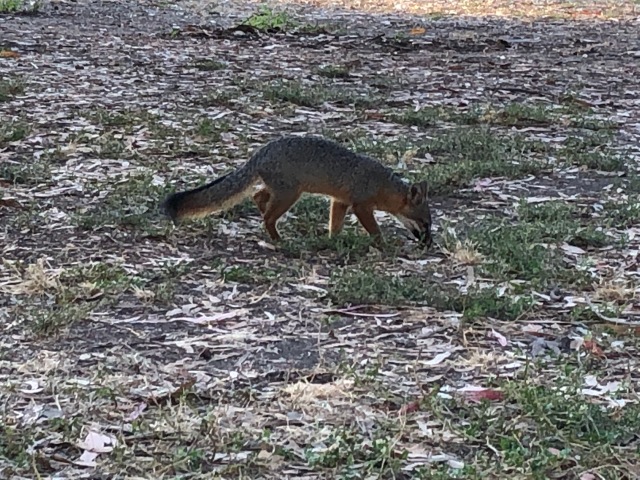 After dinner in camp, a decent freeze-dried Chicken Teriyaki from Mountain House, we gathered with others from our group to experience our first ever campfire free S’mores.  Nearly everyone on the planet is familiar with this devilishly good dessert, campfire roasted/toasted marshmallows sandwiched between two Graham Crackers and a slab of Hershey’s Milk Chocolate bar.

How to make it happen without a campfire (any type of fire is prohibited on the island) was our burning question and it was quickly answered when we recognized familiar cans of Sterno being used as the heat source.  How ingenious.  The next day Joanna took another long hike and I ventured over to the visitor’s center to check out the exhibits and the day passed in a pleasant fashion until we gathered again at the dock to make the return trip to Oxnard.

We downed a couple of beers during the voyage, retrieved our gear at Island Packers and took off down Highway One through Oxnard proper, then around the bend at Point Mugu and along one of the most beautiful and famous stretches of coastline in California. 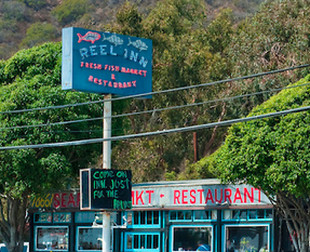 We continued through Malibu beginning to pick up Sunday afternoon beach traffic until we reached our dinner destination just north of Topanga Canyon Blvd., The Reel Inn.

Line Up and Order

Serving food at this location under various owners since the late 1940’s, this is an informal joint that delivers good fresh seafood at very reasonable prices.  You stand in line to order, are given a number along with your drinks, and when called you retrieve your food.

Along with a decent $28 bottle of Sauvignon Blanc, Joanna went for the Scallops at $23 and I the Swordfish with Cajun seasoning at $19, each with two sides with our total tab amounting to a shade over $80.  This is as good as it gets for a bottle of wine and fresh seafood this nicely done. 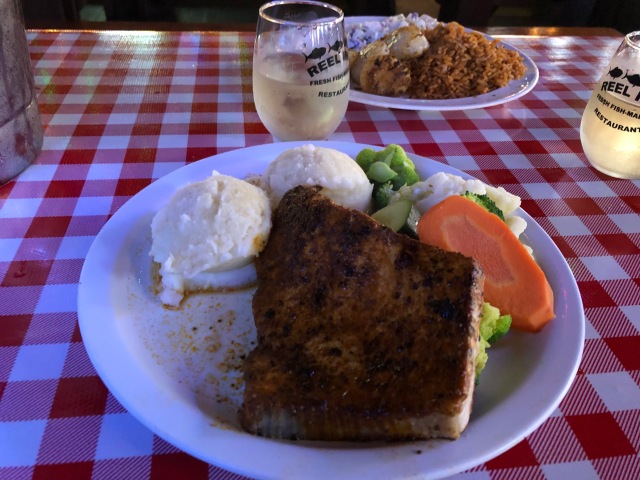 By the time we finished eating traffic had died down and we arrived home soon thereafter, tired but ready to start the next portion of our two week journey, starting the next afternoon with an overnight in Santa Barbara and then continuing north for some camping, visiting the kids in Oakland, and last and possibly best of all, four nights in Yosemite.  Bring it on.