We returned to the Hotel AraCan to clean up and relax before taking off for the central train station and our overnight journey to Aswan.  This would be the first time for Joanna and I to spend a night in a sleeper compartment (we’ve done some overnights early in our marriage in Europe in non-sleeper seating sections) so we were looking forward to the experience, particularly in light of our journey up the coast of California on Amtrak back in summer.

While waiting for our train, which was delayed (it seems that like in America, they don’t necessarily run on time), another line would come roaring through the station packed to its limits.  The passengers, mostly men, could be seen hanging out of windows and doors, with many squeezed in between the coaches, perched precariously on the couplings.  It was if we were in a dream, the crowds, the sounds the sights all making for a he surreal highlight film.

Our coach pulled in and boarding, we stored our bags in the small compartment and prepared for the next leg of the adventure.  The train pulled out of the station and after some time dinner was served, an ingenious set up where the table trays, stored loosely on the floor, were inserted into a slot to hold the airplane like meal we received, a nice chicken entrée, a good cucumber salad and various rolls.  One staple of the Egyptian diet is bread and rolls; one encounters them at every meal, and they dominate the breakfast offerings.

After dinner our porter (one per coach) came in to prepare the compartment for sleeping, which involved pulling down the upper bunk  and the back of the lower seats to expose the bed there, and then arranging the sheets and blankets for sleeping.  Soon thereafter, we tucked ourselves in and eventually fell, to the sometimes gentle and at others a bit more vigorous rocking of the train, into a good night’s sleep.

The delay the night before gave us more time than normal the next morning and so, after breakfast (more rolls and some fruit) we met Kim and Marty in the club car for a cup of coffee, a nice way to start the day.

Sunrise on the Way to Aswan

Arriving in Aswan, we climbed aboard a bus that took most of us to our first stop of the day, the Philae Temple, at a cost of 600 EGP ($35) apiece.  Originally located near the expansive First Cataract of the Nile, it was the site of an Egyptian temple complex.

In the early 1960’s it was dismantled and moved to Agilkia Island in the reservoir of the Aswan Low Dam, downstream of Lake Nasser, as part of the UNESCO Nubia Campaign project, protecting this and other complexes before the 1970 completion of the Aswan High Dam.

Outer Courtyard of the Temple

More than two thirds of Philae’s surviving structures were built in the Ptolemaic era, which started with Ptolemy I Soter’s accession after the death of Alexander the Great in 323 BC and ended with the death of Cleopatra and the Roman conquest in 30 BC.

Entrance to the Temple

During this period the island became a prominent site of pilgrimage not only for Egyptians and Nubians but for pilgrims from as far as Anatolia, Crete, and the Greek mainland.  The Roman era saw an overall decline in pilgrimage to Philae, especially from Mediterranean regions; nevertheless, it remained an important sacred site, especially for Nubians, who continued to visit both as individual pilgrims and in official delegations from their government in Meroë.  Eventually Christians would engrave crosses on the walls to claim the temple for their own. 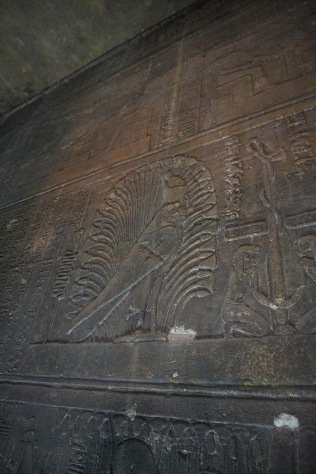 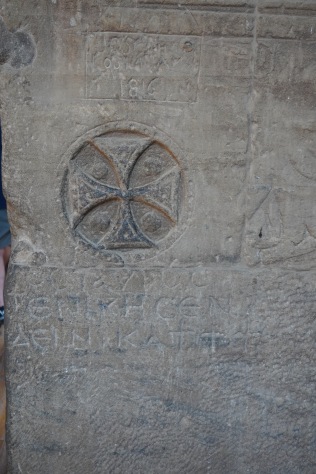 After finishing up our time in the Temple, we all gathered at a type of café we’d soon see a lot of, at the monuments and temples we would visit, an informal grouping of tables and chairs with refrigerated cases of drinks and plenty of snack food out on display.  It was unclear whether there was wait service, so I grabbed a couple of drinks and an ice cream and paid someone who, whether they were authorized to do so, gladly took my money.

Joanna and Marty Walking from the Cafe

We returned to Aswan by boat and after climbing aboard the bus, stopped at the Philae Perfume Palace, an essence shop for a demonstration of glass blowing and then a thorough presentation on the numerous essences they had for sale.  One of the downsides, or upsides depending on your perspective, of taking guided tours is the often-obligatory stops they make for what is purported to be a demonstration of some local craft, but turns out to be yet another ploy to sell tourists questionable or overpriced souvenirs. 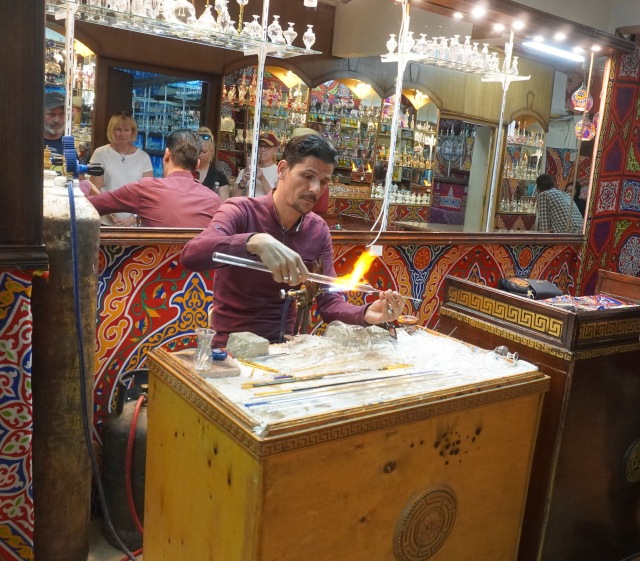 This would happen a number of times during our tour, but we had the reasonable assurance that Mahmoud was steering us towards reputable vendors with products actually made in Egypt.  This would seem to be the case with the perfume palace, where the lengthy demonstration provided insight into the basic process of perfume making, that is that flowers are cultivated, harvested, and then their essence is extracted to provide the foundation for every well-known fragrance in the world.

We would buy two small bottles and a blown glass container to take home, a nice but not inexpensive souvenir of our time in Aswan.  And now, a few months later, the fragrance is still rich and deep, lasting long after it is applied.  We left the shop and took a ferry ride to the Pyramisa Isis Island Aswan, our hotel for the next two nights.  This would be an unexpected upgrade over the normal lodging for this town, and a good one is was. 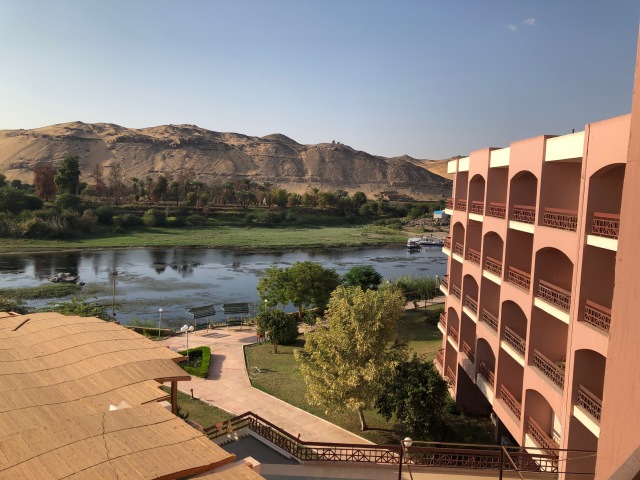 View from our Room at the Pyramisa

With some time to kill in the afternoon I made my way downstairs to the bar and was actually able to order a beer before heading out for the first of two meals we would enjoy in the homes of locals during the tour, this one with a Nubian family.  Looking forward to it and our long trip down to Abu Simbel the next day, drinking that cold beer was a simple pleasure that one savors for as long as one can because  in Egypt, it’s hard to know when you’ll get another opportunity.