We left the cathedral and walked over to the National Palace, the seat of the federal government in Mexico.  This site has been a palace for the ruling class of Mexico since the Aztec Empire and much of the current palace’s building materials are from the original one that belonged to the 16th century leader Moctezuma II.  Upon arrival that plan went sideways when we discovered that we needed identification to enter and Joanna had left hers back in the hotel; discouraged we sought out an alternative to do that afternoon.

Ever resourceful, we walked back to the Plaza de la Constitución (El Zócalo) and then a couple of blocks north to the Templo Mayor.  This was the main temple of the Mexica peoples in their capital city of Tenochtitlan a large altepetl (the altepetl, in pre-Columbian and Spanish conquest-era Aztec society, was the local, ethnically based political entity, usually translated into English as city-state) in what is now the center of Mexico City.

Founded sometime around 1325, the city was built on an island in what was then Lake Texcoco in the Valley of Mexico and remained the capital of the expanding Aztec until it was captured by the Spanish in 1521. 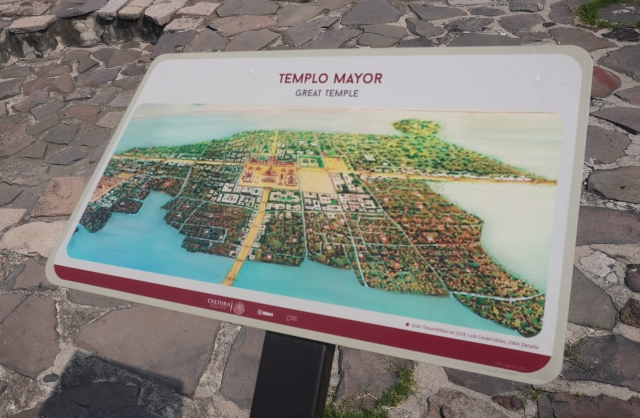 The Mexica are a Nahuatl (known historically as Aztec) speaking indigenous people of the Valley of Mexico who were the rulers of the Aztec Empire.  The form of Nahuatl used in the 16th century, when it began to be written in the Latin alphabet introduced by the Spanish, became known as Classical Nahuatl and is still spoken today by over 1.5 million people, mostly in Mexico.

According to tradition, the Templo Mayor is located on the exact spot where the god Huitzilopochtli gave the Mexica people his sign that they had reached the promised land: an eagle on a nopal cactus with a snake in its mouth.

Coat of Arms on the Mexican Flag

We entered the site and walked through and around it, trying our best to imagine what these ruins might have looked like if they weren’t well, you know, ruins.  All that remains are the foundations left after the temple was destroyed by the Spanish in 1521 to make way for a new cathedral.  More impressive was then entering the large multi-story museum devoted to the temple, the city, and the lives of the people who inhabited it. 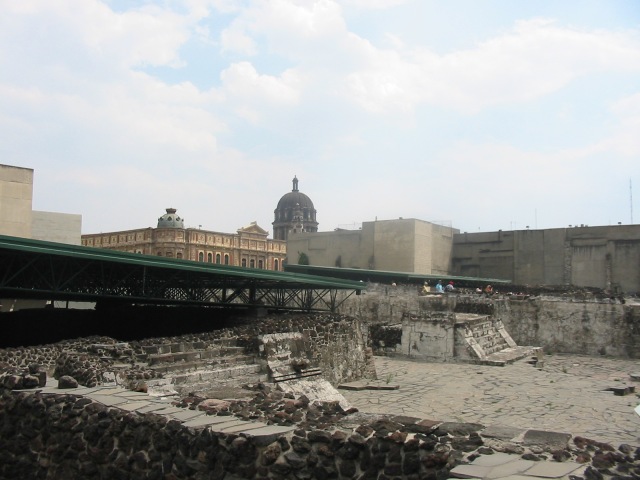 View of Eagle building. The ruins of the Great Temple are in the background.

The museum has eight main exhibition halls (Salas), each dedicated to a different theme.  Room 1 is dedicated to the goddesses Coatlicue and Coyolxauhqui, mother and sister to Huitzlipochtli, respectively.  Room 2 is dedicated to the concepts of ritual and sacrifice in Tenochtitlan.  Room 3 demonstrates the economics of the Aztec empire in the form of tribute and trade, with examples of finished products and raw materials from many parts of Mesoamerica.

Lobby with View of the Tlaltecuhtli monolith, “The Lord or Lady of the Earth”

Sala 4 is dedicated to the god Huitzilopochtli. His shrine at the temple was the most important and largest.  Room 5 is dedicated to Tlaloc, the other principal deity of the Aztecs and one of the oldest in Mesoamerica.  Room 6 is dedicated to the flora and fauna of Mesoamerica at this time, as most contained divine aspects for the Aztecs.  Related to Room 6, Room 7 contains exhibits of the agricultural technology of the time, especially in the growing of corn and the construction of chinampas, the so-called “floating gardens”.  The last room is Room 8, which is dedicated to the archeology and history of the site. 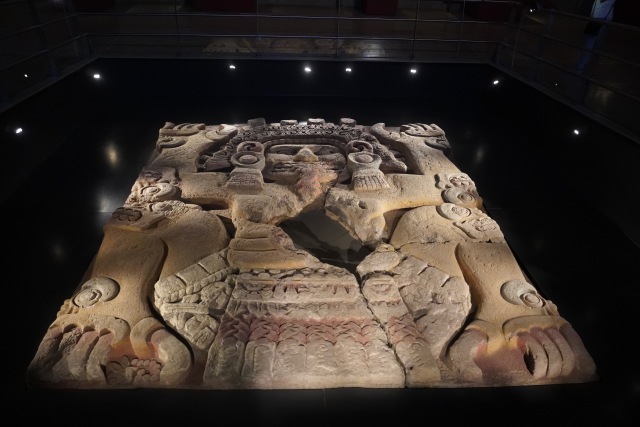 Tlaltecuhtli monolith, “The Lord or Lady of the Earth”

Just like the Archeology Museum the day before, we blew through it all quite quickly as little or none of the descriptive text is in English, a blessing when you are tired but not too rewarding from an acquisition of knowledge perspective.  We stepped out of the Museum and late in the day, knew it was time to head back to the hotel.  Tired from the walking we’d done we couldn’t quite face up to the long trek required to get to the metro station and so hailed a taxi, a resource we would avail ourselves of frequently in the coming days and for a shade under $14 spent the next 30 minutes in comfort.  Much like at home in Los Angeles, here distance is not measured so much in miles but in time to travel.  The heavy traffic of Mexico City means going three miles by car takes half an hour.

Back at the hotel, neither of us could muster up the energy to look for a place to eat so Joanna volunteered to walk a couple of blocks away to La Naval, one of a number of locations for a local chain featuring a large selection of wines, liquors, cigars and food.  Returning with a bottle white wine, some sliced meat and cheese, we enjoyed a quiet and relaxing picnic in the room, much like that night in 2017 in Santo Domingo when we were in the middle of the Camino de Santiago in Spain.

Anticipating another full day tomorrow with a guided tour of Teotihuacan it was good to be able to reenergize in the room, reading or watching a movie that we’d downloaded to one of our devices.  Of the many changes that have occurred over the years that we have traveled, this now commonplace outlet for reading and media consumption, along with English being spoken almost everywhere, has made time away from home a bit more enjoyable.  So, as they say, let’s get back to the movie.

View of Ruins with Cathedral in Background