Our taxi ride to the bus terminal went smoothly, a dramatic departure from the one upon our arrival in town.  With an hour to kill before our departure, we sat in the spacious, sun light filled seating area and watched the folks around us, grabbing a snack to take with us during our four-hour ride to Puebla.

As we’ve mentioned in prior posts, bus travel in Europe, and particularly in Mexico, is an acceptable and affordable means of passage.  Trains are expensive in Europe and not readily available in Mexico; air travel has gotten less costly but, in many cases, doesn’t offer the flexible scheduling that the buses do.  And travel by bus now is not the like riding in the Greyhound days of old.

Bus travel often means large terminals with many services, buses with modern conveniences like Wi-Fi, power outlets, and onboard toilets.  In Mexico you will generally have the option of numerous departure times each time to popular cities, making it much easier to plan movement within the country.  We made one quick stop on the way, just long enough to pick up a drink and then arrived soon enough at the main Puebla terminal.

J and J on the Bus

Puebla is the capital and largest city of the state of Puebla, the fourth largest city in Mexico and the fourth largest Metropolitan area in Mexico with a current population of 3,250,000 people.  It was founded in 1531 in an area called Cuetlaxcoapan, which means “where serpents change their skin”, in between of two of the main indigenous settlements at the time, Tlaxcala and Cholula.

Due to its history and architectural styles ranging from Renaissance to Mexican Baroque, the city was named a World Heritage Site in 1987.  Famous for Talavera pottery, most of its economy is based on industry as it is home to the world’s largest Volkswagen factory outside Germany and an Audi plant that is the most technologically advanced plant in the western hemisphere.

We took a 100 Peso ($5.47) taxi to the Hotel Colonial, our home for the next three nights, located one block away from the Zocalo in the heart of the downtown historical district.  Originally constructed by the Jesuits in the late 1600’s after they built the Espíritu Santo church (La Compañía) and its college (Universidad Autonoma de Puebla) across the street, it was used as a monastery until it was acquired and turned into a hotel in the late 1700’s.

In 1930 the building was bought by the Del Campo family, who restored it and changed the name to Hotel Colonial and after a series of ownership changes, is now owned by Hotel Colonial de Puebla, S.A. de C.V.  We checked in and with the bellhop assisting, used the ancient and small elevator to get to our room, which knocked us out when we opened the door to view it for the first time.

The first thing one notices is its size, with tall ceilings and large window/doors that open onto a small balcony overlooking the surrounding plaza.  Next up was the bathroom, with its separate sink leading into the bathtub and toilet, both richly decorated in the tile the area is famous for.

Our only complaint during our stay, and it is a small one, is that our rooms proximity to the plaza meant for noisy conditions at night, but nothing we couldn’t sleep through. 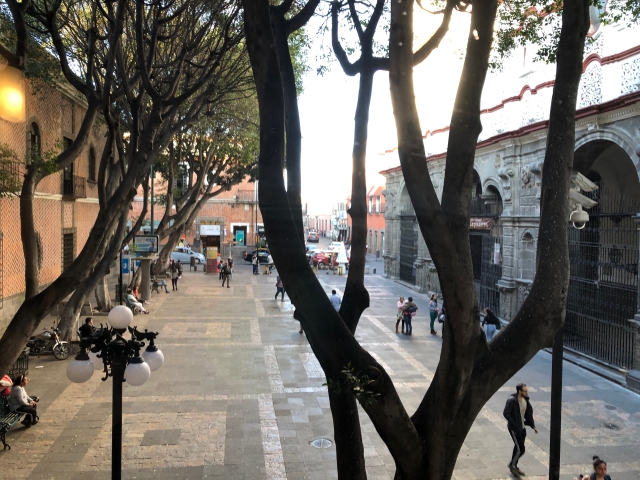 View from Our Window

We relaxed in the room drinking some of the Mezcal that was left from Oaxaca, and then ventured out to walk around the block to the Zocalo, checking out the sights, the cathedral and surrounding buildings lit spectacularly.

The Cathedral at Night

Hungry by now we returned to the hotel and decided to have dinner in the dining room there, as it seemed to garner good reviews.  And we weren’t disappointed.  Joanna ordered a filet of fish served Veracruz style and I had the filet Tampiquena, just like I get at home at Paco’s.  Both dishes were excellent, all one could ask for from each. 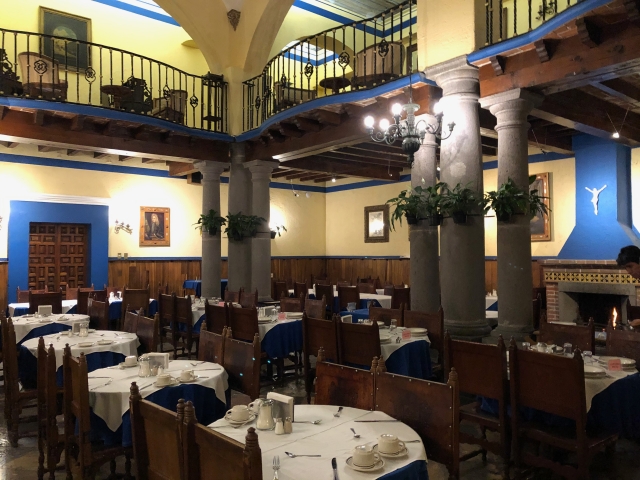 We finished with a nice flan and the bill, including three glasses of win, and the tip came to 925 Pesos ($47.46), another delicious and reasonably priced meal, this time in a hotel restaurant.  It would not be our last good meal in Mexico but that evening it was one of the best.

The next morning, we ate breakfast in the hotel restaurant, which we would do each day of our stay.  Much like at the Hotel Gonzalez in Mexico City, it was full menu with many options, including pancakes and French toast.  Most days we’d have an egg dish but mix it up with a variety of dishes which ran us from 235 to 252 Pesos ($12-$13), including coffee, juice and rolls.

We set out after breakfast ready to give the city around us a good going over.  We’ll cover that and more in the next post.

Another of the Cathedral