After relaxing in the room, we ventured out for some souvenir shopping, not buying anything just yet but on the lookout for some pieces of Talavera pottery that we could purchase for gifts and for our own use. 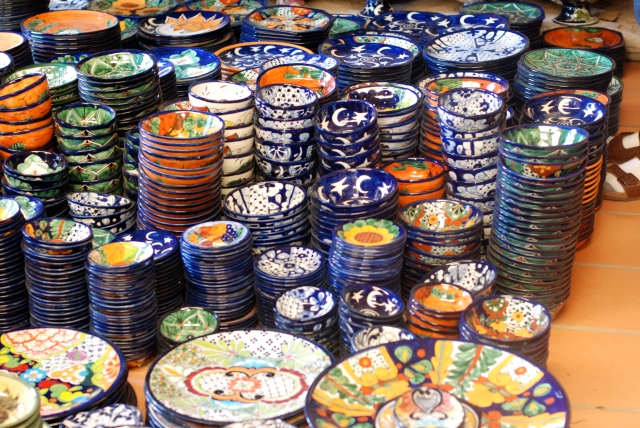 We located a couple of shops nearby but figured we’d wait another day before committing to any and then made our way to Barra Beer, a pub we’d read about in Lonely Planet, offering beer from around the world, including 21 varieties of those from Germany.  Six blocks later we found the place, located upstairs through an interior courtyard, as are many places in Mexico and Europe, where a plain street facing external façade cloaks a richer interior.

It’s a fairly large sports bar-oriented space, with pool tables and other games and lots of seating in various rooms.  As it was quite loud inside, music played at near ear-splitting levels, we opted to sit in a side room in order to speak at something approaching normal conversational levels.  A waitress appeared and given the limited menu choices available to us at the table, we ordered a couple of draft beers.  I can’t honestly recall if they were exotic or just good Mexican products, but, in the end, they were cold and beer which is never bad.

We walked back towards the hotel with a place for dinner in mind, Amalfi trattoria tradizionale, which I had spotted a number of times as we walked between the Zocalo and the hotel.  We entered the smallish dining room and were seated near the front window at a nice table with a view of the street.  Our young waiter approached and began a delightful dialogue that would last throughout the meal, he having mentioned his desire to improve his English.  We were more than happy to oblige.

We started with a large portion of Prosciutto and Melon, more than enough for a table of four and yet we somehow managed to finish it all.  The melon was perfectly ripe, and each bite of the slightly salty ham offset it nicely.  We’d ordered a bottle of Montepulciano and began enjoying it at the same time.

Next up came a sausage and mushroom pizza, too large for us consume in one sitting so we took a few slices back to our room for a snack later.  As we were finishing up the owner of the restaurant came to the table to inquire about the meal and along with our waiter, engaged us in a pleasant discussion about the town, our trip, and the world at large.  It was a great way to end the meal, made better by the bill when it came, a mere 615 Pesos ($31.65) including tip.  That’s right.  For about the cost of the bottle of that wine at a stateside restaurant we experienced it plus very good food and great atmosphere.

We returned to our room by way of the Zocalo, now teeming with life and paused for a moment to snap a picture of the brilliantly lit Cathedral standing out against a darkening sky.  It was one of those magical moments one experiences when traveling, the end of a long satisfying day of sightseeing, a fine meal resting in your stomach, the heart of the city pulsating around you and the magic of a lit cathedral to reinforce that this is why you travel.

The Cathedral at Dusk

The next day, our last in town, would be a busy one as well, with the plan to catch a local bus to the nearby town of Cholula, known for being home to the widest pyramid ever built (yes wider than any in Egypt), the Piramide Tepanapa.  To catch the CAPU (Central de Autobuses de Puebla) bus we needed to walk 2.5 miles to the stop (we thought to forgo a taxi this time), a fairly straightforward route until we got close to where it was supposed to be and then spent 15 minutes or so trying to locate it as there was no real signage to indicate it.

Eventually it revealed itself and we climbed aboard an older bus, paying 20 Pesos ($1.09) for the two of us and took off on a bumpy 45-minute ride to Cholula. 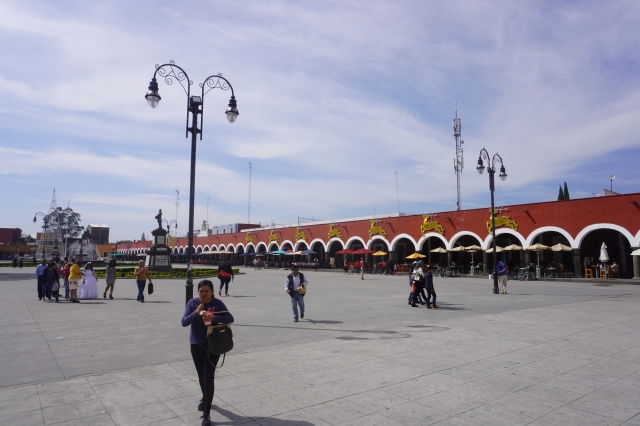 Not being sure where to get off, we took our chances when we noticed a number of folks disembarking, and then walked a few blocks to the Plaza de la Concordia, framed by the Parish Church of Cholula. We located a small coffee-oriented café and paused for refreshment, still not sure about which direction to take once we finished. 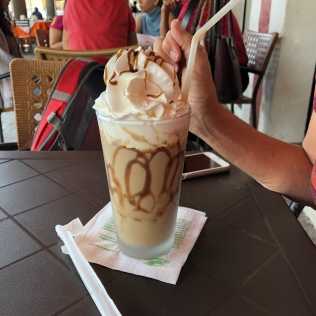 And so, as if often our mode of operation, we simply set off walking, this time out of the plaza and down Avenue Morelos, passing by a number of touristy shops, which along with a steady stream of other pedestrians, reassured us that we were heading in the right direction.  As we made progress, we could see the outlines of the pyramid complex rising before us and that is where we will head in the next post.

Pyramid and the Santuario Rising Above the City