We arrived at the university midmorning, parking not far from the Erb Memorial Union as it being the first week of the new year, classes may not have been in session yet.  We entered a new part of the building, finished in 2016 as part of a 95-million-dollar project that added approximately 80,000 square feet of new space and renovated 134,000 square feet of existing space. 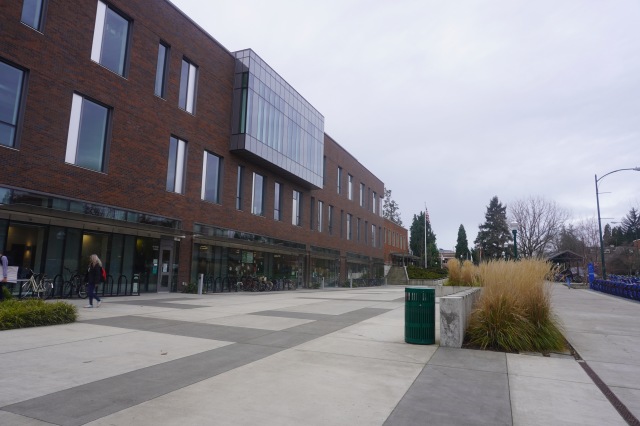 Exterior of the New Addition

The original building, named for Donald Erb the university’s war-time president, who died in office in December 1943 at age 43, was constructed in the 1950s and expanded in the 1970s.  The latter addition was considered inefficient from both a space use and a sustainability perspective leading to the initiative to expand and renovate the facility. 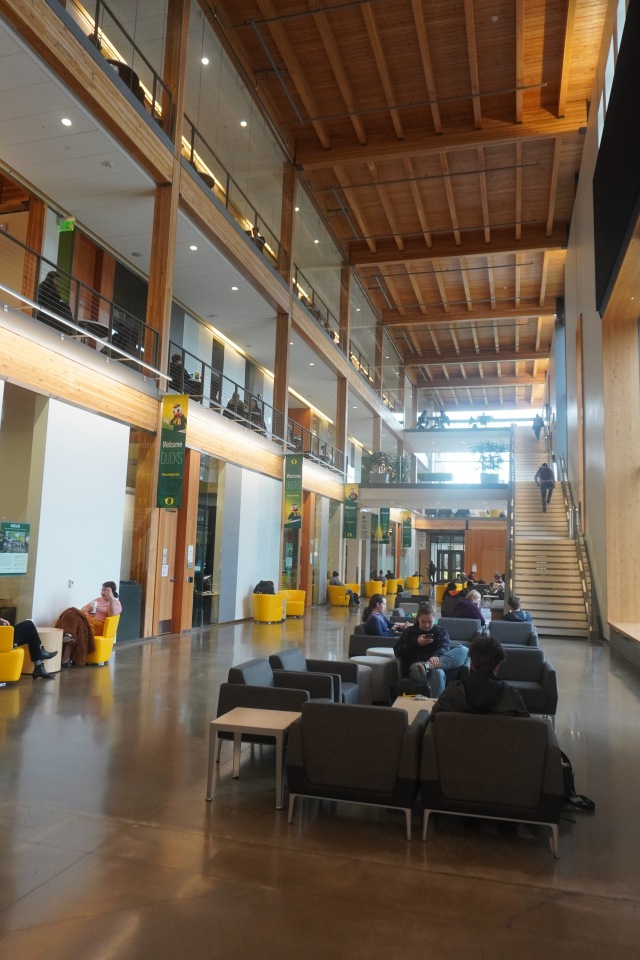 New services that came from the project are a bike and pedestrian plaza, expanded spaces for the ASUO Multicultural Center and student organizations, and a Bike Center with a do-it-yourself repair shop, bike loans, and classes.  Also included are a 250-seat movie and multipurpose performance theater, Smart building technology wired for modern performance and access, and important for a growing campus, a pub and expanded food service venues.

View from the Top

Having spent over 30 years in higher education, the bulk of it involved in some type of Student Union experience, I long ago bought into the view that a central gathering place like this on a college campus is a key element in building what we in the business call community.  Here it is in a nutshell from Mankato State University in Minnesota:

It’s commonly understood that college is more than classrooms and textbooks. It’s a time for discovery – personally, socially and globally.  Within that context, a strong student union must be more than brick and mortar. It must be the heart of campus life.  Its pulse must be the pulse of the campus.

And that is what the remodel at U of O accomplished.  It is a beautiful and functional building, full of natural light and open space, with plenty of places for students to gather solely or in groups.  We walked through the entire building, both old and new spaces and admired the way the architects had joined them into a pleasing whole.  We finished our visit with a latte from the Starbuck’s outlet and happy with our morning so far, departed campus for the next part of our day.

Addition Laminated onto the Old Building

Kemet had told us about a driving tour we could take out of Cottage Grove, a small town about 25-miles south of Eugene.  During a 30-mile loop, we’d get to see six covered bridges, taking us about 90 minutes in total between driving and stopping to take pictures.

The first stop was right in town at the Centennial Bridge, which was constructed in 1997 by volunteer labor to celebrate Cottage Grove’s Centennial. Materials came from two Lane County bridges that had been demolished.  It rests on abutments of the old Main Street Bridge, which stood until the 1950s.

Next up, on the outskirts of town, was the Chambers Bridge, the only covered railroad bridge west of the Mississippi.  It was built in 1925 by lumberman J.H. Chambers in order to cross the Coast Fork of the Willamette River from his sawmill to the timberlands west of town.  Unfortunately, it was in use for just seven years before the sawmill burned down.  The bridge was acquired by the city of Cottage Grove and restoration through local funding and a National Historic Covered Bridge Restoration Grant began in the summer of 2010. 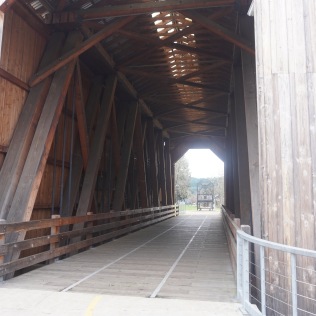 From here we drove out of town to begin the loop and arrived at the Mosby Creek bridge, which was constructed in 1920 and restored in 1990.  It is the oldest bridge in Lane County and its single car lane remains open to traffic today.  The structure has semi-circular portal arches, ribbon openings on the roof line of each side, and board-and-batten cladding on the exterior. 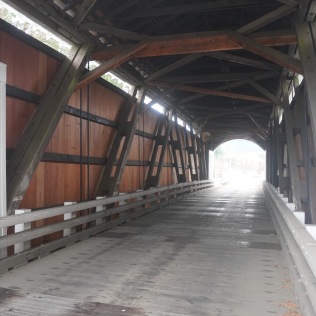 A short distance away was the Stewart Bridge, constructed in 1930 and restored in 1996, this structure has semicircular portal arches, ribbon openings at the eaves, and decorative S-curve brackets.  The deep water below the bridge is considered one of the best swimming holes in the county. 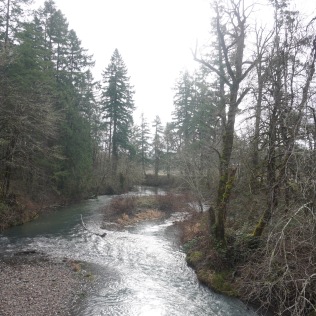 Further up the two-lane country road lay the Currin Bridge, which was built in 1925 and restored in 1995.  It features white portals and red sides and replaced an earlier covered bridge built in 1883 by prominent local bridge builder, Nels Roney. 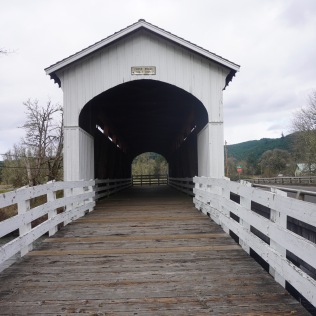 Our last stop took us out to the end point of the loop, driving around Dorena Reservoir to the Dorena Bridge.  Constructed in 1949 and restored in 1996, this bridge was built after the completion of Dorena Dam on the Row River, forming the present-day lake.  The Dorena Bridge once tied the roads on the north and south sides of the lake.  Now closed to traffic, the bridge is a popular wedding site. 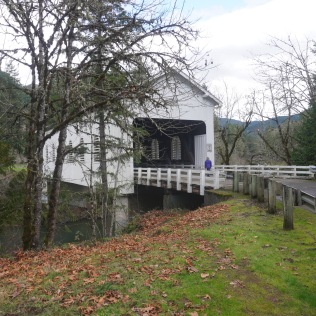 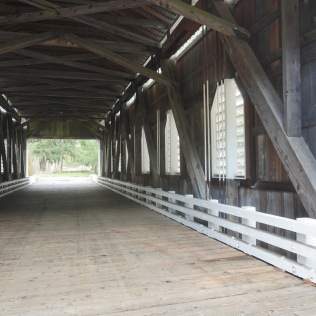 We completed our loop and made way back to town.  We’d spend the rest of the afternoon exploring near the university and grabbing a snack at a local pub.  We’ll get into all of that in the next post.