The restaurant at the hotel gets good ratings so it was a simple decision to eat there our first night in town.  They had set up a large dining space on an adjacent patio and a grassy area in front of our room, which made for a nice environment for eating.

Patio Dining at the Murphy’s

To start we enjoyed the Coconut Shrimp appetizer along with a Lemon Drop Martini for Joanna and a glass of School Street Chardonnay for me.  During our stay we’d focus on the wineries of the area and the two I sampled that night were both from the Murphy’s area.

We then split the Pear and Four Cheese Fiocchi tossed with sautéed kale in a brown butter sauce, topped with chives, red pepper flakes and drizzled with honey.  Each time we order anything in that type of sauce, it takes us back to Italy in 2014 when we sampled a couple of pasta dishes of that nature, both with Lyndsay, the first in Sienna and the second for lunch in Montepulciano.  We’ve tried a few times to duplicate it at home but never quite get it right.

Dessert was a bread pudding that I complemented with a Frog’s Tooth Tawny Port, which is aged in oak for 10 years and fortified with brandy.  We closed out our bill at $92, reasonable for all that we had ordered and consumed and lingered for a while in the cooling night, still warm but now pleasant, eventually returning to our room to finish out the evening reading or streaming from our tablets.

The next morning, we set out on a bike ride that would be every bit as challenging, if not more, than our ride in Oakland to Grizzley Peak.  Right out of the hotel we started up Sheep Ranch Road and would end up completing 20 miles with nearly 2,700 feet of climbing, quite a bit of it on grades in excess of 10-percent.

Part way up my rear tire hit something which created a hole, just large enough so that the tubeless tire goo inside barely managed to seal it.  We pumped enough air into it to complete the ride but would deal with it again the next day. 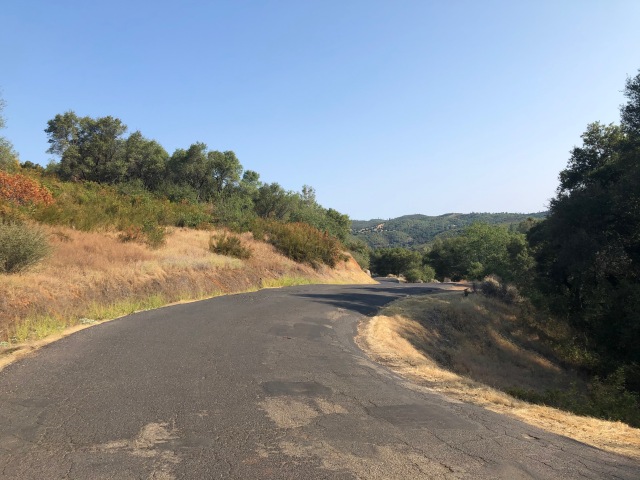 We finally summited and coasted downhill to Highway 4 near the Avery Hotel, one of my hangouts in 1978.  I’d often eat there on a Saturday night and Rendy and I, at the end of a long and memorable day ‘tripping’ around the area, in some fashion made a nuisance of ourselves in the bar waiting to eat and thus did not get served, compounding the fact that we needed food to get back in balance.  But that is a story for another day. 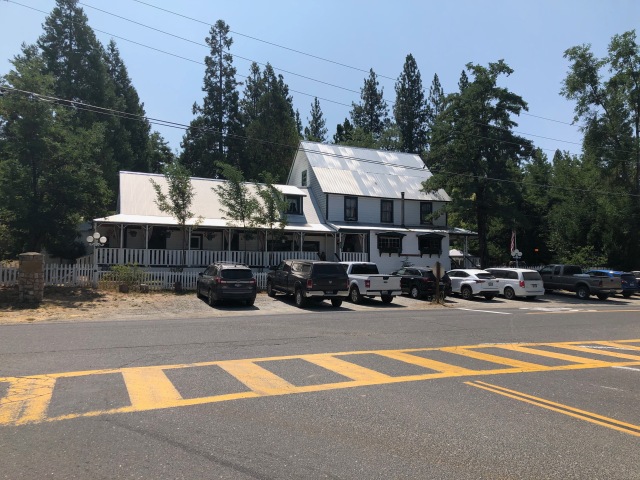 We were greeted by a welcome sight, Day-O, a local coffee operation where we ordered the largest iced coffee they could produce and greedily sucked it down as even though we’d started riding early, by this time it was quite warm out.  Refreshed, we climbed back on the bikes and with one small climb before us, coasted back down to Murphy’s, a thrilling descent with a two-mile section at the end that enters a narrow canyon, steep rock wall on the right and a creek on the left.

After cooling down and cleaning up we walked the blocks that comprise Murphy’s, bustling with weekend tourists who have come to taste wine and shop.  Much like Napa, Santa Maria, Paso Robles, and Temecula, this area is booming due to wine and it seemed like at least a third of the shops in town were wine related.  We stopped in at Jo Ma’s Artisan Ice Cream for a couple of scoops, the final step needed to cool our bodies down after the mornings hot ride.

We then hopped in the car and drove back up Highway 4 in order to stop in for a peek at Aggie and Dick’s cabin, which we did briefly, snapping a couple of pictures for memories sake (and to send to them for their enjoyment).

From there, it was just a short distance to one of our favorite stops, The Red Apple Stand, home to great apple cider.  Joanna waited in line to get a half gallon of the refreshing liquid and a couple of apple turnovers for breakfast the next morning.

Queuing Up at the Stand

After a quick nip from the jug of cider, we continued up the road to the town of Arnold to see if I could locate a bar/restaurant I had frequented while living there, but to no avail, much having changed in the last forty years.  Having exhausted the search, we backtracked a short distance to the outskirts of town to stop in at Snowshoe Brewing for beer and dinner.

We were seated at a picnic table under an umbrella in the lawn at the back of the building, a nice place to be on a warm summer’s afternoon.  Joanna ordered an Apricot Wheat while I went light as well with the Alpine Pilsner and to start, we dove into the Poutine.

We demolished the fries and gravy and with my second beer, the Irish Red Ale we enjoyed a meatless salad, full of different types of lettuce, artichoke hearts, blue cheese crumbles and a creamy balsamic dressing, making for just enough food after the heavy poutine.

We settled the tab, which came to $52 including the tip and drove down the hill to Murphy’s and our comfortable room, again spending the night reading and streaming.  We’d come to discover that throughout the entire trip we’d only once turn on the hotel supplied TV, instead relying on our own material and devices for entertainment.  Just another way the world we once knew has changed around us.