Less than a week later we found ourselves driving up to Buellton on Friday for a weekend of bike riding with a group of our riding friends in Los Angeles.  Five of us (Heather, Deborah, Cathy, Joanna and myself) met up in the parking lot of Pea Soup Anderson’s Inn before noon to do short ride in before checking in, while others in our group tackled the long climb outside of Santa Barbara up Gibraltar Road.

We unloaded our bikes and took off east on Highway 264 into Solvang through town to turn north on Alamo Pintado which would take us into Los Olivos.  We thought about stopping for coffee, but it was too early in the ride (we’d be back a couple of times during the weekend to eat in town) and so continued on heading west until we hooked up with Ballard Canyon Road which would take us south all the way back down to Highway 264.

Still too early to check in at the hotel, Joanna, Cathy and I rode west on 264 a few blocks to Figueroa Mountain Brewing to grab a bite to eat.

We parked our bikes, grabbed an outdoor table and ordered from the app at the table, a beer apiece for Joanna and me and the Santa Maria Tri-Tip Sandwich (French Roll, Stagecoach Stout Marinade, Garlic-Herb Butter, and Charred Salsa or Davy Brown BBQ Sauce) and fries to split, planning to compare it to one our favorite versions which is offered at Firestone Walker.

It turned out to be good, but somewhat bland, as if we were missing something and so we concluded it didn’t quite match up with the one at Firestone Walker.  Finished, we returned to Pea Soup and checked into our large room on the second floor with plenty of space to store the bikes and not long after, armed with a beer or two, meandered poolside to join the rest of the group for a couple of hours of socializing.  For dinner most of us returned to Figueroa Mountain, again sitting out on the large patio 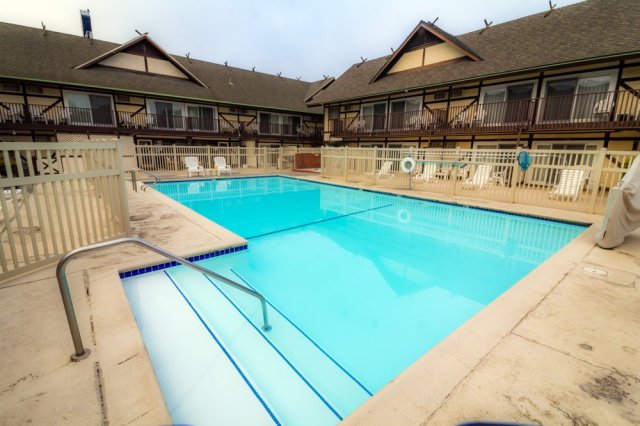 The Pool at Pea Soup

Once there we settled with the others in our group at a couple of larger tables and along with a beer, Joanna and I split the Carnitas taco plate which is served with chips, salsa and a portion of pinquito refried beans.  It was quite good and while others were eating, we realized why the sandwich earlier seemed to be missing something as we glanced at the plate Tony had and noticed it came with two different sauces, which definitely would have catapulted our sandwich a level or two higher in our estimation. 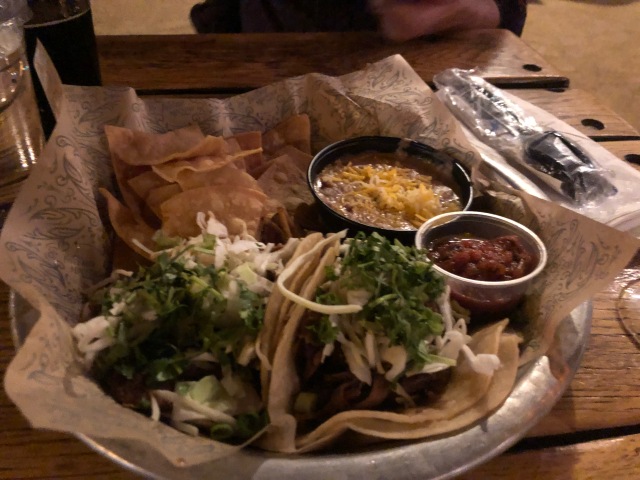 Our ride the next day would be bit more ambitious with Tony joining us, west to Drum Canyon and ascending its steep climb on a road in very poor condition, then down to Rancho Los Alamos, under the 101 and paralleled acres of grape vines to Alisos Canyon Road until it met up with Foxen Canyon Road. 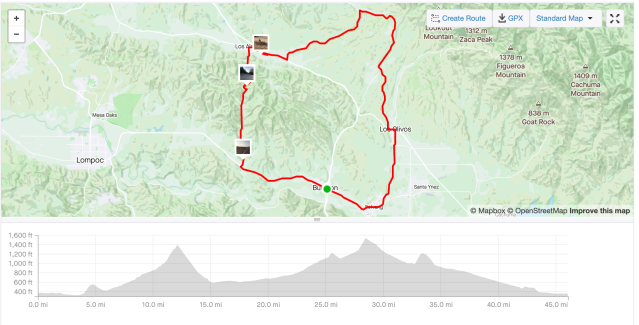 Just before you can make the turn at Zaca Station to stay on Foxen, you have to ascend a short but challenging climb, one that usually comes at about mile ninety of the famous Solvang Century when the rider is thoroughly depleted but knows I they can just finish this hill, its downhill to the finish.

Joanna and Deborah Just Before the Drum Canyon Ascent

After making the turn at Zaca Station we had one more climb to go before coasting down into Los Olivos, to stoop at the R-Country Market, where I ordered us a Turkey and Swiss on Sourdough to split, a delicious sandwich so large it was easily more than enough for the two of us.

Rough Road Near the Top of Drum Canyon

Back at Pea Soup we again spent the afternoon hanging out at the pool area and agreed to all meet for dinner later at Leonardo’s, an Italian spot in a small shopping center just off Alamo Pintado.  Assured that there was a reservation for twelve of us we arrived to find that no such thing existed except for one table for four of the group.  After the rest of us waited around for more than 30 minutes, the staff arranged for a table, but it would be one seat short, so Joanna and I volunteered to abandon and instead walked the length of the parking lot for dinner at Taco Roco, a local chain.

Joanna ordered a tamale plate and I a combo with Taco and Chili Relleno along with a Modelo and we dug in once it appeared, eating most of the food in front of us, an accomplishment for folks that usually split one dish.  As an added bonus, I’d planned on spending at Leonardo’s far in excess of the $35 we did here so we walked away having enjoyed a good meal and saving the budget in the balance.

Our last day would be full, with a morning ride and then a tasting at Andrew Murray Vineyards, the winery we went to last year with Dianne, Keith, Ann, and Doug and impressed with the wines, joined their wine club.  We’d pick up our fall allotment and enjoy some wine in the bargain.  And so, the five of us, Heather, Deborah, Cathy (Tony set off separately to climb Figueroa Mountain), Joanna and I set out for a relatively short, but thoroughly enjoyable out and back on Alisal Road.

We stopped briefly at Alisal Guest Ranch and Resort, a pricey but likely well worth the tab (breakfast and dinner included in the daily rate) if that is your cup of tea, and then on a tree shaded lightly trafficked road managed one short climb that took us out to a broad valley filled with farms.  We turned around and returned to Pea Soup, getting cleaned up, car packed, and then took off for Los Olivos to grab a bite to eat at Panino, which Heather had recommended.

We took our sandwich across the street to a small park and enjoyed one of those simple repasts that have nothing to do with the food and everything to do with the place and the people involved, just Joanna and I doing what we have done for so many years, our joy in each other’s company never growing stale.

From there it was off to Andrew Murray where we met Heather and Deborah and spent a relaxing and friendly hour tasting a number of wines and enjoying a delightful interaction with our server.  But all good things must come to an end and our reward for a great weekend was a two-hour drive that turned into three and a half hours as we endured weekend travel slowdowns all the way back to home.  It was a small price to pay for three good days of riding and spending time with people we like.  We’ll be counting the days until we can return.