My next encounter with Yosemite would come in June 1975 just after my graduation from Cal State Northridge.  I accompanied three woman I knew at the time (Sue, Coach Paula, and Julie) to Camp 4, the legendary walk-in campground known as the home for many of the world class rock climbers at that time.

We were an anomaly there, sleeping in one of those large chalet-like tents while everyone else was hunkered down in two-man domes and a-frames.  A moment that would change the trajectory of my life occurred one warm afternoon as I sat in the doorway of the tent, observing the scene around me.  A friend of Sue’s from childhood days was camped nearby as he pursued a nomadic lifestyle centered around rock climbing.  It was then that I had an epiphany, which was that, I could also become for some period of time an upscale vagabond, living out of a tent and exploring life from that vantage point.

It was an uncertain time in my life, having just graduated from college yet with no full time job on the horizon (this would change soon thereafter), recently divorced from my first wife Suzanne (we’d been together for nearly seven years) and faced with the completing of what I like to call the Big Goal.  This concept revolves around any long-term endeavor that requires a commitment of time and energy outside of one’s day to day existence.  Examples would be pursuit of a college degree, planning for a long trip, or other endeavor of this nature.

Completing of the Big Goal leaves one with a sense of tremendous satisfaction and relief, now that it is accomplished and the time and work commitments are released and yet, while pursuing the Big Goal the mundane aspects of daily living become less important, subsumed by pursuit of the goal.  Once completed, although one gains back one’s normal life, the goal is gone and replaced by a certain emptiness and lack of purpose.  It can take some time to get used to normal and find some other elements to replace the Big Goal.

And that’s where I found myself, adrift so to speak with an uncertain future.  I didn’t act on that epiphany at the time, but a year later in 1976, Rendy and I returned to Yosemite.  I’d been employed at The Wilshire, an insurance company, in a great job where I’d meet Tom (Heir Angst), J.B. and Doug (the Griz), best of friends to this day.  While camping that year, I met Joan, a nurse who was traveling across the U.S. towards San Francisco and a job there and we’d begin a relationship that would last for a few months.  She became a facilitator for the epiphany when she said to Rendy and I one night that “we should go to Europe”.

A few months later I’d find out that the insurance company would be winding down operations and that’s when it all clicked and the epiphany became reality, and I began to plan for that vagabond lifestyle by hitchhiking through Europe.  And I would do just that, leaving in early June of 1977 by crossing the U.S. by bus to visit grandparents in Ohio and West Virginia and then fly out of JFK to spend three months in Europe, one of which would be with Rendy and Evan and that crazy VW Van we bought.  But that is a story for another day, the one about why I love Europe so much.

Before leaving on that journey, Rendy and I ventured to Yosemite once again, this time in February of 1997 to camp at Camp 4.  Neither of us had purchased tents yet for the Europe adventure and so we figured we’d just sleep at night without shelter, which sounded sensible at the time.  But it became less ideal one very cold night when it started raining, not quite cold enough to snow, and our hastily constructed shelter left much to be desired, as we struggled to dodge streams of water and catch some sleep before seeking relief the next morning in the warm confines of the food service operation across the street at the Lodge.  Now highly motivated, within a month, I’d buy my first tent, a Snow Lion Mountain A-Frame, just big enough for one person and a bit of their gear.  I’d also buy one of their down jackets, which I have kept to this day as a souvenir of those times.

Trips to Europe in 1979 (another three-month hitchhiking expedition), 1981, and 1982 (mine and Joanna’s wedding trip) and lots of local travel would keep me away from Yosemite until June of 1983 when she and I along with J.B. would head there for a week. 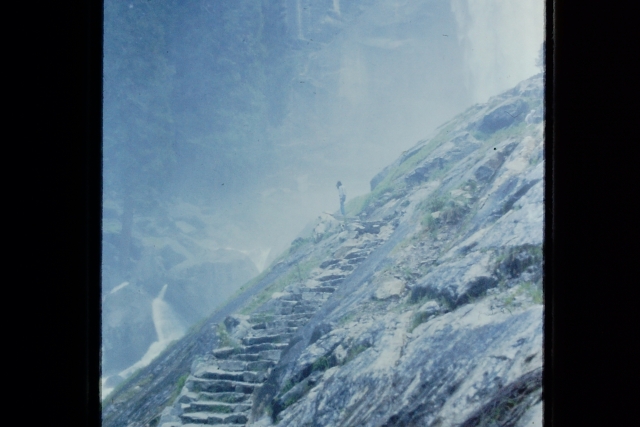 June is a good time to go to the valley as the weather is warming up, school is still in session, so few families are there and in a good year, the waterfalls and river are full as a result of a decent snowmelt. 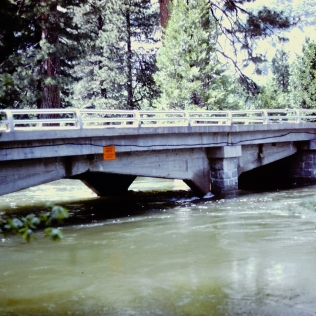 High Water at a Bridge

Snow levels that year were high, and we’d be blessed with overflowing waterfalls and the Merced at high water, leading to a number of once in a lifetime photos.

We’d have a full week, with a hike to the top of Vernal Falls up the Mist Trail, getting soaking wet in the process, shorter hikes around the valley, and an early morning camera walk that included multiple encounters with the park’s Kodak deers. 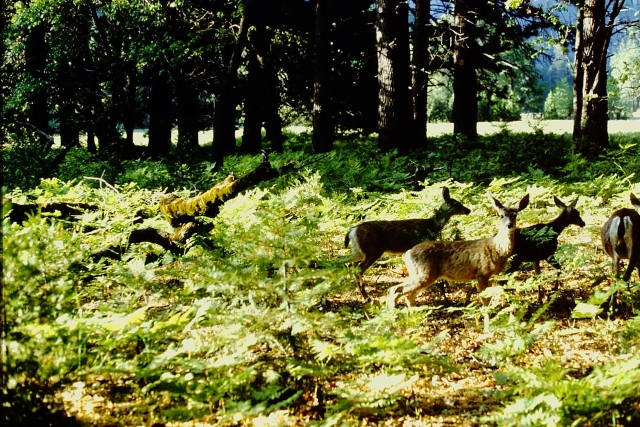 We’d not return to the valley for almost ten years and then do so with a vengeance.  We’ll cover those visits in our next post.  See you then.