The next day Joanna picked up her mom and drove her to Winston Salem to meet up with Joanna’s middle sister Debi.  Faced with another free day, I’d contacted Dan, a former student union colleague, to meet for a beer or two in Durham.  I’ve known Dan, and his wife Pat, since my first days as the Director at UCLA, and his friendship has been one of the more rewarding ones I made as a professional.

When we first met, he was the Director, or likely the Vice President for the Business Auxiliary, at the University of Arizona in Tucson.  I was attending my first Pac-10 Director’s meeting and he was the host, splitting the duties that year with another colleague, Floyd, at Arizona State University in Tempe.  I had arrived on the second day of the meeting, needing to take one of my MBA courses the night before and settled in for a full day, that would get better at the end when Dan, his associate director Bill, and I shuttled up to Tempe to begin the second half of the meeting. 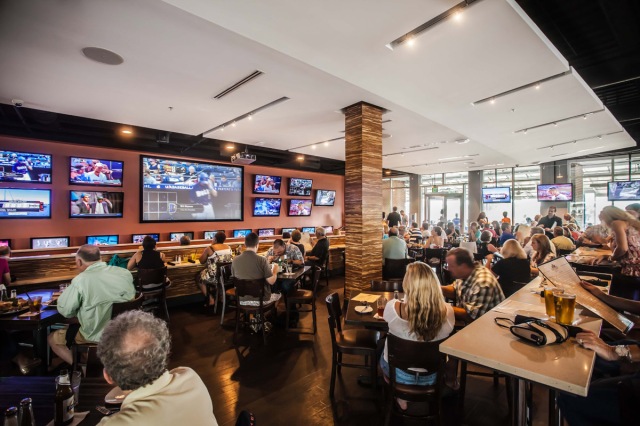 That ride was a turning point for me as I came to understand that great people populated my profession, and it was the first step in what would be my full involvement in a very rewarding career.  Dan and Pat picked me up at Nicole’s and we made the short drive to downtown Durham to spend a couple of hours at the Durham Bulls Athletic Park. 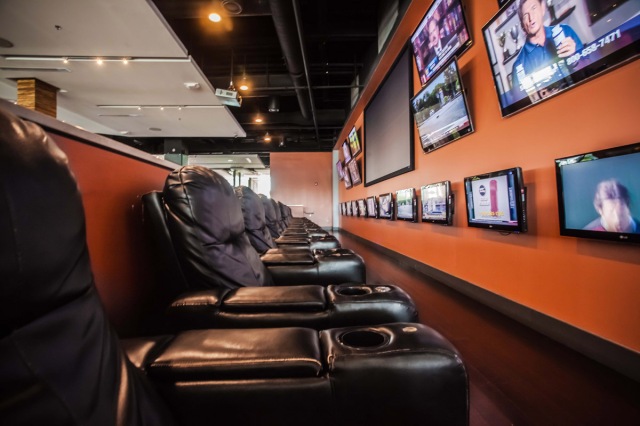 We parked on the street close to the entrance and walked into the Tobacco Road Sports Café, a large facility perched alongside the outfield of the ballpark.  One whole wall of video screens is furnished with recliners where a sports devotee can eat, drink, and watch their favorite game or sport in multiple dimensions.  We were seated outside on a patio with the outfield as a backdrop and ordered up a round of beers and some fried green tomatoes as an appetizer.

The Last of the Fried Green Tomatoes

Dan and Pat recently purchased a Lance trailer to pull behind their Subaru Ascent and having myself watched many You Tube videos on trailers and motorhomes, and whose parents lived in a 32-foot fifth wheel for five years, the subject fascinates me.  One concern they had was whether the Subaru would have enough oomph to haul the trailer up into the mountains.  I’m happy to report that their later posts would affirm that it could.

We enjoyed another round of beers and a couple of fried green tomato BLT’s, an interesting take on that top five sandwiches of all time but in the end, not a combination I’d pick again in the future.  With that they shuttled me back to Nicole’s place in Durham and we bade farewell, not knowing for sure when we’d meet again but certain it would happen in the future. 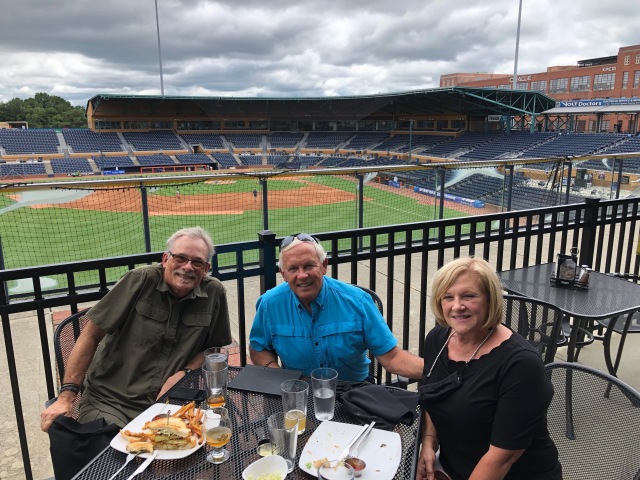 Later that day we ventured out with Nicole and her friend Becky to the Roots Bistro and Bar, not far from the house.  Sitting outside, I ordered a beer and Joanna and I split an order of Scallops, a Pupusa (Queso, Loroco, Bean, Pork with Spicy Slaw and Picado Roasted Tomato Sauce), and a Chile Relleno (Poblano Pepper, Potato, Cheese and Vegetable Stuffed, Spicy Slaw, Vegetable Rice Avocado Cream Sauce and Mango Salsa).

It was all quite good, particularly the scallops and reasonably priced as we picked up the tab for Nicole and Becky, the total coming to just $87.  Feeling the need for more liquid refreshment, we ventured a block away to Sam’s Bottle Shop, a well-stocked take-away joint with on premises draft beer that we had visited on a previous visit with Nicole.

As is to be expected when confronted with choices to be made in a list of thoughtfully assembled brew options, I will gravitate to the high gravities and the Belgians.  Gravity/Gravitate.  Clever?  You’re right, not really.  Anyway, I did multiple times as Joanna and Nicole had to deal with a crisis with their Mom via the phone, and as a consequence, I departed with a considerable buzz.

We left for Charlotte the next morning, a bit fuzzy from the night before but feeling chipper none the less and in need of some protein to clear away the cobwebs, and to provide a base for afternoon drinking (we were heading to a minor league baseball game) we stopped at a McDonald’s just of the interstate for an Egg McMuffin, coffee and Mango Pineapple Smoothie.

Becky, Joanna and Nicole at Sam’s

Suitably fortified, we soon arrived in Kannapolis and our faithful GPS device guided us to where the old ballpark for the Kannapolis Intimidators (now rebranded as the Cannon Ballers) used to be before they moved to their brand-new digs in the downtown area.  At the end of a dead-end road, we figured out our mistake and using our phones to navigate soon arrived at the new park just before game time to join Peggy, Luther, and Jay Z for nine innings of baseball.

The Cannon Ballers are the Chicago White Sox Low-A franchise, the fourth-highest level of play in Minor League Baseball, below Triple-A, Double-A, and High-A.  There are currently 30 teams classified at the Low-A level, one for each team in Major League Baseball, organized into three leagues: Low-A East, Low-A Southeast, and Low-A West.

View from Our Seats

Although this is not the highest caliber of play, it does carry the compelling advantage of being very affordable, with the best seats in the house costing just $14 apiece.  Even better are concession prices, with craft beers priced at less than $10, compared to the $17.50 I paid at Dodger Stadium not long ago.  It was a fine day for the game made even better by the company of good friends we miss dearly.

Game over, we had one more stop on our reunion tour, that would be with our bike buddies at the Bonefish Grill in Concord.  We arrived just in time to greet Maurice, Bonnie and Charlie Gable, and Kim and Paul Smith.  From our earliest days in Charlotte, we rode with Bonnie and Maurice, and then later the other three.  An incalculable number of memories reside here, far too many to recount, some chronicled in this blog. 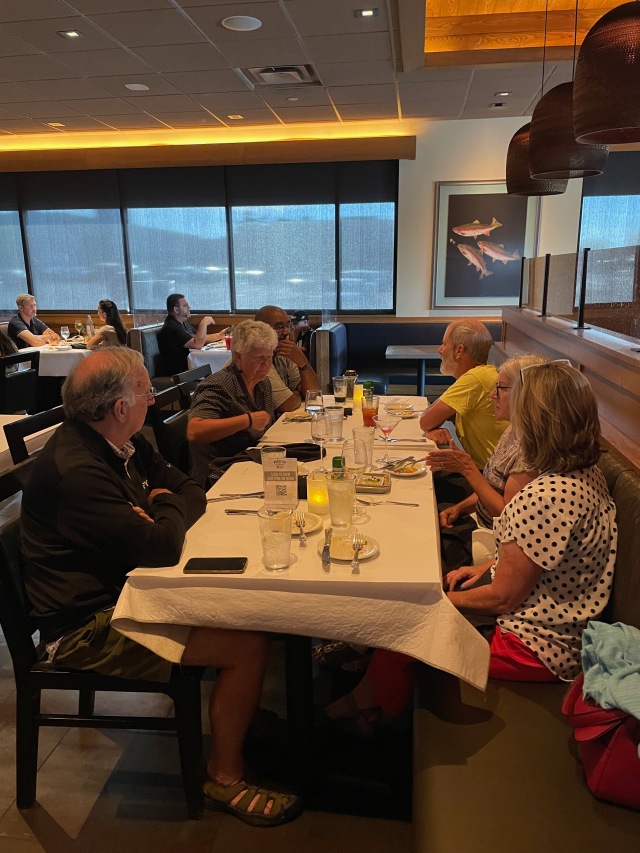 The Group Inside Bonefish

With no Bonefish Grills on the west coast, it was nice to return to this well run reasonably priced seafood franchise.  Joanna started with a Pomegranate Martini while I opted for a Sonoma Cutrer Chardonnay while the table enjoyed two appetizers, one the franchises stalwart Bang Bang Shrimp and the other the Calamari. 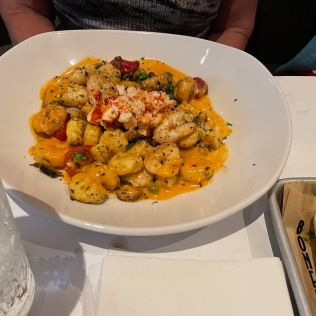 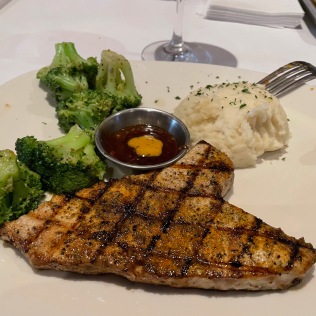 For entrees, Joanna ordered the Thermidor Gnocchi (Sweet lobster chunks and tender shrimp sauteed with golden-brown potato gnocchi, mushrooms, peas, and fresh tomatoes tossed in lobster-sherry cream sauce), a steal at $20 and for me, the Swordfish, blackened and grilled with Jasmine rice and broccoli, with a Meoimi Pinot Noir to accompany it. 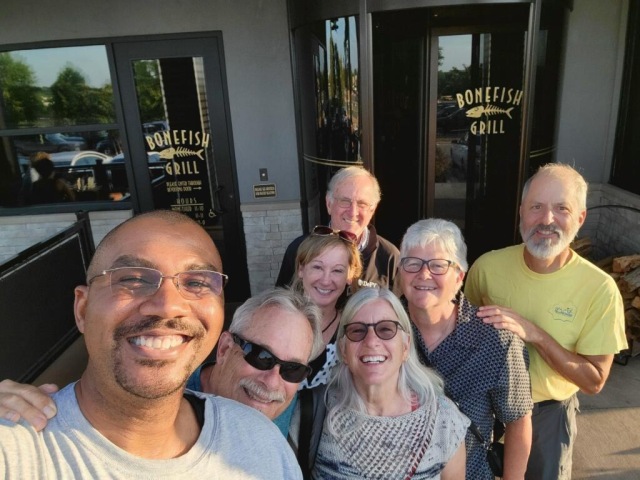 We returned to Drury Inn and Suites near the University for our last night in town.  I stayed here when I was interviewing for the job at UNC Charlotte in 2007 and with its reasonable rates for a suite, we’ve lodged here a number of times when not staying with friends or at an Airbnb.  It’s convenient location suited us well for our last meal in town, meeting Dee and Richard for lunch at Pinky’s Westside Grill in Huntersville.

We’ve eaten at its original location just east of downtown, which opened in 2010, a number of times after owner and Chef Greg Auten terminated his relationship with the iconic Penguin restaurant in Plaza Midwood, as chronicled by our friend Jeremy Markovich.  We met Dee and Richard in the parking lot and were soon seated on the patio, where we ordered, the Green Chili Pork Sandwich (grilled pork loin, pineapple, swiss, arugula, and Jamaican mayonnaise) for Joanna and the Southern 500 (mustard, chili, onion, and slaw) for me.

This would be my last southern style burger or dog until our next visit to the east coast, so you can believe I enjoyed it immensely, also knowing that with no food available for purchase on the plane, it would hold me in good stead got home.  Lunch like this with friends reminded us of how much we miss Charlotte, how much we miss the good folks there and just how much we look forward to seeing them again, perhaps this fall.  With us, it is likely we’ll make that trip.  Tune in later to find out. 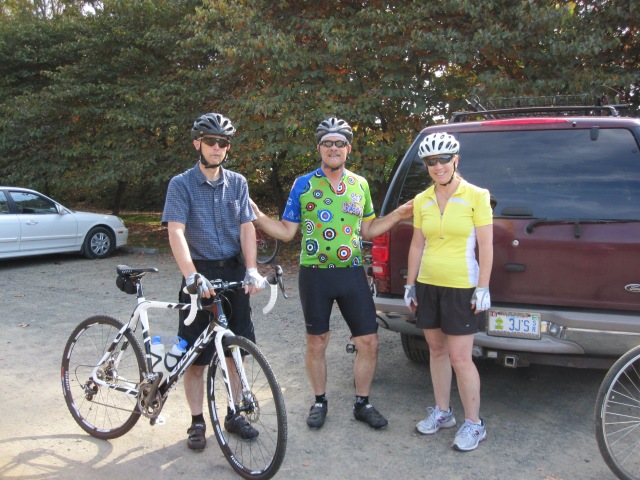 End of the Penguin: https://jeremymarkovich.substack.com/p/penguin-charlotte-brian-rowe-controversy