Eight years would pass before we would visit Europe again.  In those intervening years:

We flew into Frankfurt in early October, picked up the rental car from Hertz, and headed to our first stop, Rothenburg ob der Tauber (Red fortress above the Tauber), a very popular destination whose origins date back to 950 AD.  We spent three nights there at the Hotel Goldener Rose and thoroughly enjoy walking the length of the city walls that encircle the town, the Criminal Museum which focused on judicial punishment over the last 1,000 years, Imperial City Museum, Doll and Toy Museum, Christmas Museum, and the Craftsmen’s House.

City Gate Near the Goldener Rose

Built around 1300, over the course of the next seven centuries the Craftsmen’s House was home to tradesmen of many varieties, including vat makers, dyers, weavers, shoemakers, tinkers, potters, basket makers, soap boilers, pavers, and bricklayers.  The house had been preserved owing to a hermit who lived in it for many years, up to modern times, who was able to maintain the house in its original condition as he neither required running water or electricity.

Well Inside the Craftsmen’s House

Having enjoyed two very fine dinners at the Goldener Rose, we finished our stay in Rothenburg with an equally good meal at a Chinese restaurant, reinforcing my belief that excellent ethnic foods abound in Germany.  On October 6th, we drove a couple of hours south to Munich for three nights at Camping Thalkirchen.   Although the campground remained physically the same since our last Oktoberfest crazed visit, what had changed was the increased number of motor homes and trailers being used.  Indeed, Europeans have embraced the mobile home lifestyle just as eagerly as we Americans and campgrounds that once were monopolized by tent camping now had an almost equal number of non-tent campers.

Munich and Thalkirchen would be a good stop for us, traveling as we were with four-year-old Jessica.  Since her birth we had taken her just about everywhere we had traveled and so she was used to (or at least would tolerate) long periods in a car, camping in a tent, and spending time with Mom and Dad doing adult type activities (museums, historical buildings, etc.).  But regardless of how conditioned they are, four year olds need to pursue activities more appropriate to their age, and Munich provided that for us.  We pushed her pretty hard in Rothenburg and thus Thalkirchen, with its children’s playground and better yet, other children, proved to be a welcome diversion a week or so into the trip. 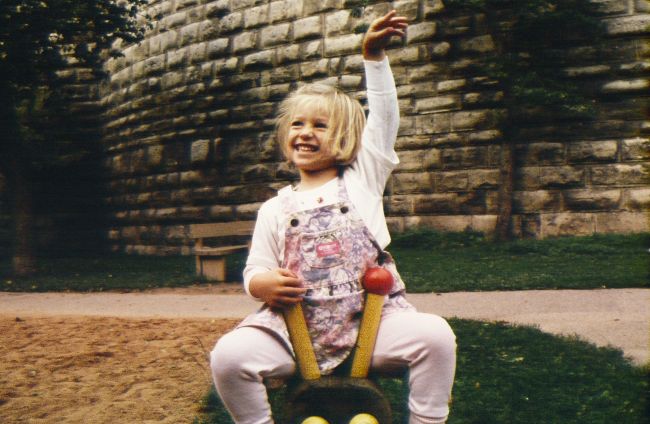 Our next stop was Salzburg, with just two nights and a long day of sightseeing.  We made the long climb up to the castle and spent much time comparing the instruments of torture displayed there with those we’d seen in Rothenburg.  One came away with the distinct impression that these were not kindler, gentler times, particularly if you didn’t agree with the predominant religion of the era. 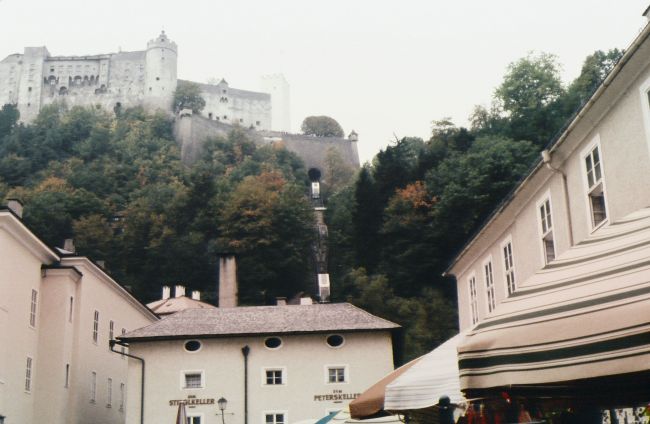 St. Peters Stiffskeller with Salzburg Castle in the Background

We enjoyed a very nice dinner at St. Peter Stiftskeller, a recommendation we picked up somewhere along the way.  Located within the monastery walls of St. Peter’s Arch Abbey, it is claimed to be the oldest inn in Central Europe because of a document mentioning it in 803 AD and is believed to be one of the oldest continuously operating restaurants in the world, and the oldest in Europe.  Our second night in town was spent at the B&B we had booked based on one of the guidebooks we took with us.  For dinner we made a little picnic, and enjoyed some quiet family time together.

Picnic in Our Room in Salzburg

We departed for Vienna on the 11th and camped three nights at Camping West, a good choice at the time but apparently it has since gone downhill according to the Trip Advisor website.  Vienna was a great town to visit, with plenty of historical elements mixed with some fun time for Jessica.

We explored the older central part of town, spending quite a bit of time at St. Stephens cathedral, construction of which was initiated in the 1300’s.  While Jessica and I climbed to the top of the Stephansdom (south tower, tower room), Joanna descended into the catacombs.  When the eight cemeteries near the Cathedral’s side and back walls were closed due to an outbreak of bubonic plague in 1735, the bones within them were moved to the catacombs; burials there occurred until 1783 with over 11,000 persons entombed there.

Later that day we made our way out to The Wurstelprater an amusement park that dates back to the time of the Austrian Empire, when Emperor Josef II opened the Prater to the public in 1766.  Its best-known attraction is the Wiener Riesenrad, a Ferris wheel (for movie buffs, it plays a key role in The Third Man).

We finished up the day at a local playground; equipped with wooden slides and other play objects that had been outlawed as dangerous a decade earlier in the United States.  It didn’t matter to Jessica, who burned off energy sliding, climbing and jumping.

Jessica on the out of code slide

Those of you who know Joanna also know how much she likes horses.  What you may not know is that Vienna is the home of the Spanish Riding School, which has for over 440 years cultivated haute école, or as we know it, dressage.

Jessica and Joanna Outside the Spanish Riding School

Early in the morning of our last day in Vienna, we lined up to gain entry into the school to witness one of the sessions, or as their website describes it:

The Ballet of the White Stallions

The performances of the famous snowy white Lipizzaner stallions and their riders in the baroque Winter Riding School built by Josef Emanuel Fischer von Erlach in the years 1729 to 1735 are some of the most moving and beautiful impressions for horse lovers and bear living testimony to European culture.

During these performances the visitor witnesses the spectacular perfection of the “High School of Classical Horsemanship” with the Pas de Deux, Work in Hand and on the Long Rein and the School Quadrille, which is shown, with eight stallions. The Levade, Courbette and Capriole are the highlights of the “Schools above the Ground”. 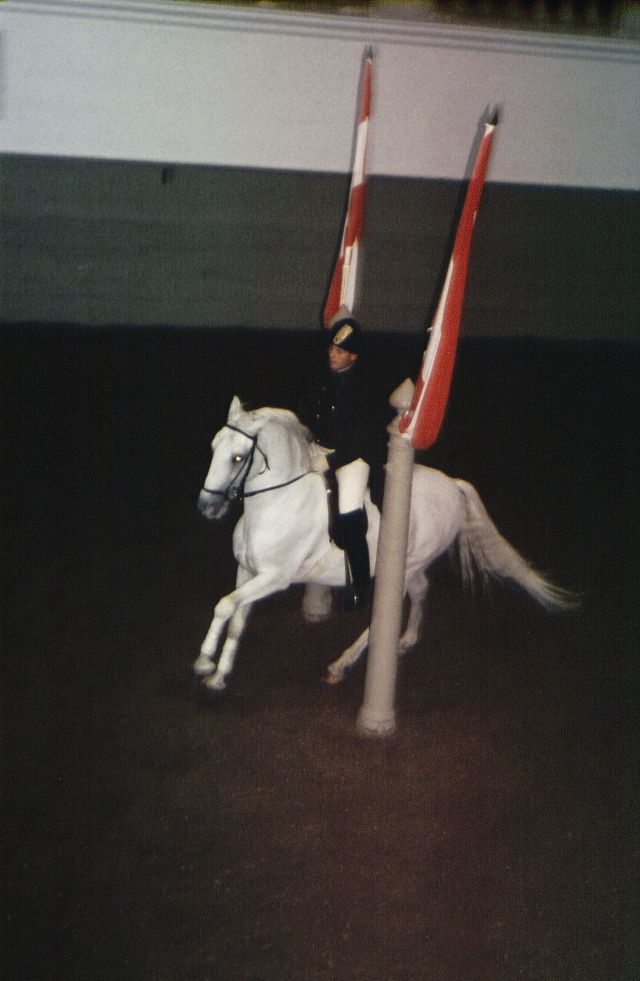 Unfortunately for me, watching the show in a building used by horses for over four hundred years, set off my allergy to them and I had to leave the show early.  I passed the time in the school’s outer courtyard, sneezing and wheezing, but still enjoying a crisp cool autumn morning in one of Europe’s great cities.  This wouldn’t be our last encounter with the Lipizzaner’s, but that story will have to wait for another post.

Two books were invaluable for us in planning and executing this trip.  The first is a well-known travel guide whose books we’ve come to rely upon trip after trip.  That would be:

The second book gave us very recommendations on kid friendly places to stay at and go to: 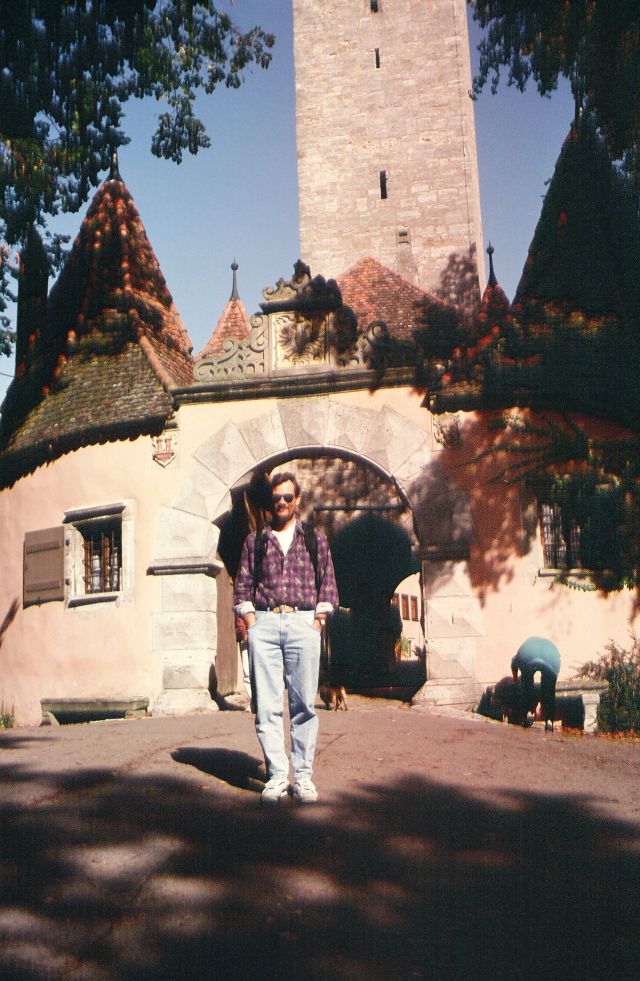 Outside a Rothenburg Gate