Alex, Hap, and I drove down to Munich the next day and checked into the Hotel Bristol, just off the Sonnenstrasse near Sendlinger Tor, a city gate at the southern extremity of the historic old town.  It served as a fortification during the Middle Ages and is one of Munich’s three remaining gothic town gates.  We spent the afternoon walking the large shopping district, checking out the New Town Hall and its famous glockenspiel.

Making our way to an Internet café located next to the train station, we rented a table with a computer and connection and ate dinner while we caught up on email and news from home.

Heading back up into the historic center, we stopped in at Zum Augustiner, the large restaurant/beer hall serving my favorite beer in Munich.  Located in one of the few historical buildings from Munich’s Art Nouveau period the place is vast.  We enjoyed quite a few beers and made our way back to the Bristol, stopping for a late night snack at a Burger King.  After a long night of indulging, a Whopper proved to be the preventative action needed to ensure a safe landing the next morning. 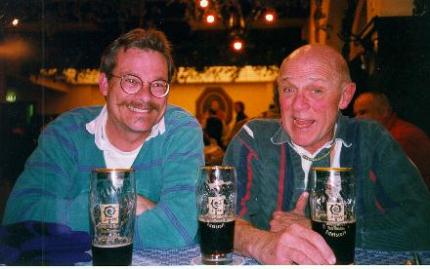 Jerry and Hap at Zum Augustiner

After wondering around the historic center the next morning, we spent some time at a street market shopping for souvenirs and just generally soaking up the atmosphere.  Making the same mistake I’ve made almost every time I’ve approached a fest eve, I did not eat as intended, a miscalculation I would pay in due course.  Later in the afternoon we made our way out to the Paulaner Brewery to begin our evening of Startkbier consumption.

We started out in the main festhall, but eventually moved into a smaller room that was a bit less crowded and noisy.  It was there that we met a young married couple, both members of the US Armed Forces, who joined us at our table and spent the remainder of the evening with us.  I don’t recall their names and over time lost the contact information they gave us, but this type of encounter is commonplace at the beer fests one attends in Germany.

As the evening passed, our consumption of Paulaner’s Salvator, the original recipe brewed by the Paulaner monks since the late 1700’s continued unabated.  Substituted for food during Lent by the monks, we too tried that path; that is not consuming much in the way of food, a questionable pursuit when you are drinking beer by the liter and it runs right around 8% in alcohol content.  We eventually finished our last liter, and said farewell to the couple, promising to stay in touch.

The Group at Paulaner

We walked in a not so controlled fashion back to the Bristol, encountering numerous obstacles that from time to time, overwhelmed our seriously impaired facilities.  One set of bicycle racks in particular seemed to create the largest hurdle; but once we regained a vertical posture, righted the bikes in the rack, and resumed forward progress, we made good time back to our beds and a longs night’s sleep.

Rising later the next morning, we nursed our hangovers for the bulk of the day.  I woke earlier than the other two and spent a large part of the morning reading Tom Wolfe’s A Man in Full, which had been published the previous fall.  I’ve always been a fan of Wolfe and this was a perfect book for the trip.  Tipping in at nearly 750 pages, I read the whole thing in one week, the kind of dedicated time we rarely get to put into a book given our usually busy lives.  Engrossing, with a nicely paced narrative, it was easy to open the cover and keep reading.

We finished up our stay in Munich with dinner at the world famous Hofbrauhaus, also located in the historic center of town.  It is a large facility and owned by the Bavarian state government it is one of Munich’s oldest beer halls.  The Hof (court) in its name comes from its history as a royal brewery when the Duke of Bavaria, Wilhelm V, founded it in 1589. 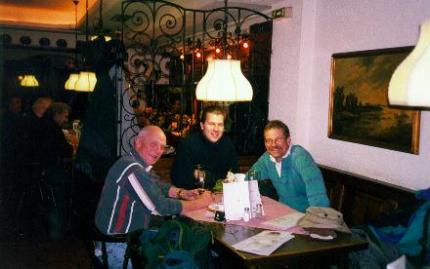 We drove back up to Frankfurt on the 8th, a long day in the car.  If you’ve not had an opportunity to drive on the Autobahn, it is fun and terrifying at the same time as there is no mandated speed limit, although limits are posted (and enforced) in areas that are urbanized, substandard, accident-prone, or under construction.  You can travel in excess of 100 miles per hour, which our diesel Jetta handled with ease.  Generally 2-3 three lanes wide in both directions driving is not as relaxing as it can be here on our interstates, where the bulk of the time you can set your cruise control, sit back, and enjoy the ride.

On the Autobahn, the left most lane is for passing only, with slower traffic relegated to the two right most lanes.  You can cruise in the passing lane, but must be ever vigilant, monitoring the rear view mirror for a car rapidly approaching from behind.  Usually, not long after you disengage your attention, you notice flashing high beams in the mirror indicating someone is about to crawl up your exhaust ports.  Now you have to quickly move over to the right, which may not be as easy as it sounds, given traffic conditions.  If you choose to play it safe in the middle or right lane, then you are constantly passing and slowing, as cars and trucks move and merge from the right.  After an hour or so of driving under these conditions you are mentally drained.

We arrived late in the day in the suburb of Moerfelden, just south of the Frankfurt airport.  We had to scramble to secure beds for the night as most places were sold out, such that Hap and Alex booked a room in one place and I got a single across the street in another.  Throughout the trip Hap had expressed the desire to visit a German sauna, found throughout the country these facilities combine swimming pools, whirlpools, sauna’s, and massage along with food and drink.  Clothing is often optional, sometimes throughout all of the building.  And so we piled back into the Jetta and drove about an hour to just north of Frankfurt, to an operation that may be the one I’ve supplied a link for (Rebstockbad).  If not, it appears to be remarkably similar to the one we visited.

These are not bathhouses as you would envision them (get your mind out of the gutter), but generally are family friendly places with lots of activities.  Joanna and I visited a couple when we stayed with Dave and Cindy in 1984.  Hap, Alex, and I would spend most of the evening there, swimming, soaking, and sweating.  Unfortunately eating wasn’t on the docket and when we left later in the evening, I was quite hungry and looking forward to a final taste of German food before leaving the next morning.  By the time we arrived back in Moerfelden, it was close to 10:00pm and the restaurants were all closed.  And so, for my final meal in Germany for this trip I indulged in Donner Kebap, or as is commonly known here in the States, a shawarma or gyro.

Settled into my snug little room, just big enough to hold a single bed and small dresser I drifted off to sleep full of the great feeling one has when they are finishing up a grand adventure, with just a flight home to complete the journey.  Imagine my shock, as I was jolted out of a sound sleep a couple of hours before the time I was to arise by a blaring clock radio mounted into the headboard of the bed.

Picture this scene: it is pitch dark in the room and I’m not sure where the light switch is given my disoriented state.  I finally get a light on and address the howling radio, only to discover that all of its labels are in, wait for it, German.  It took what seemed like an eternity to get the thing switched off and once accomplished, I’m not sure I ever went back to sleep, or at least a sound sleep.  But after a quick bite to eat at the hotel and the fast ride up to the airport went smoothly, I bade farewell to my two friends and traveling partners, and boarded the jet for home.  At the time, international flights gave you beer for free and so I enjoyed quite a few cans of Becks as I winged my way home, a fitting end to The Hunt for Starkbier.

A Man in Full: http://en.wikipedia.org/wiki/A_Man_in_Full

Rules for a German Sauna: http://www.studentuniverse.com/student-blog/study-abroad/rules-for-a-german-sauna